The Porta della Carta of the Doge’s Palace in Venice

A gothic masterpiece of Venice... On a guided tour of Venice the elegant ceremonial entrance of the Doges’ Palace surely deserves to be mentioned (today it is the exit of the Palace). It is a wonderful work of art by Bartolomeo Bon and other masters that cooperated with him.
It is called Porta della Carta, literally Paper Portal, possibly because of its proximity to the archives or because of the presence of some scribes who worked nearby.
It dates back to the first half of the 1400’s and it is an exquisite example of Late Gothic style in the city. 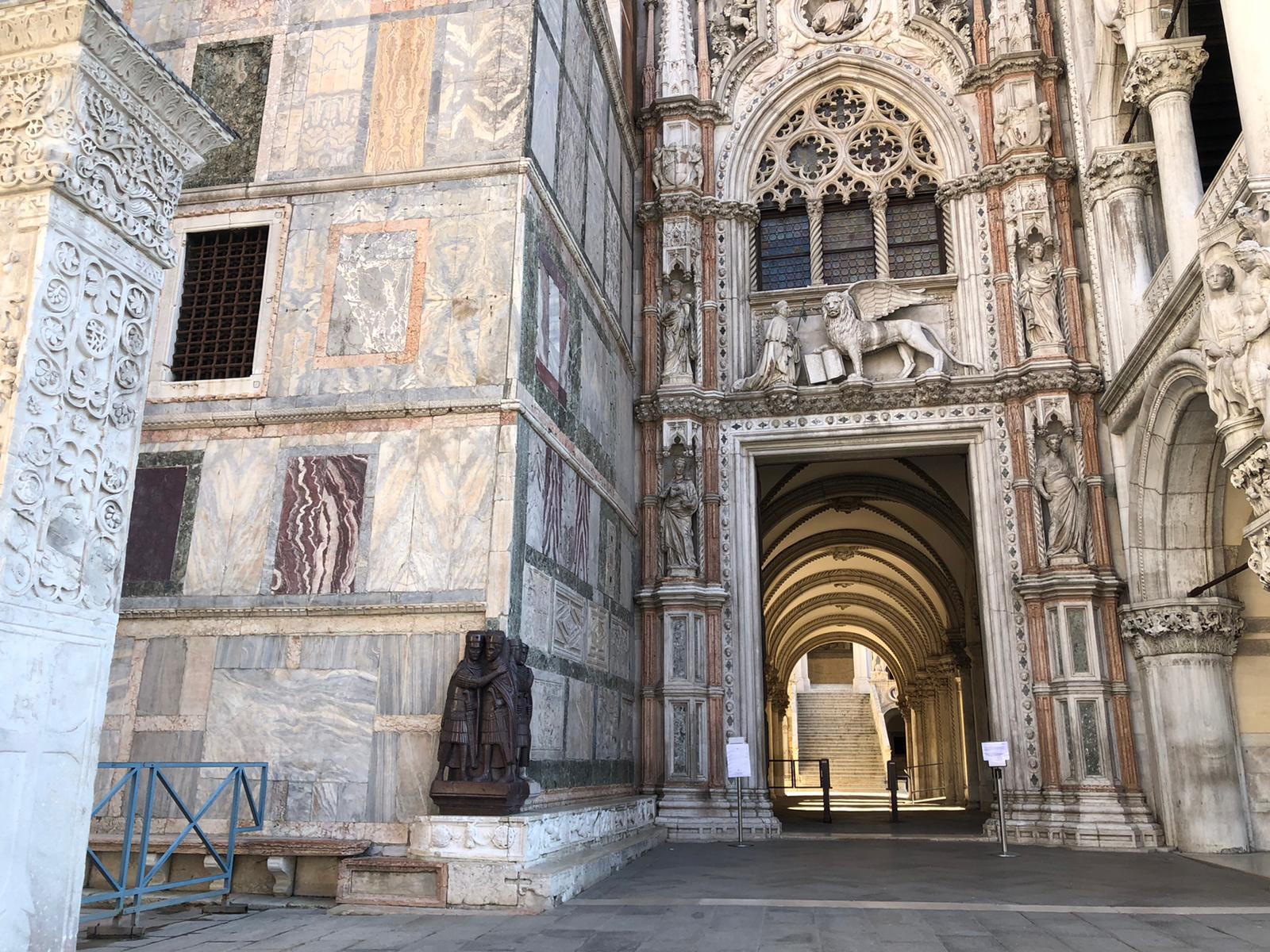 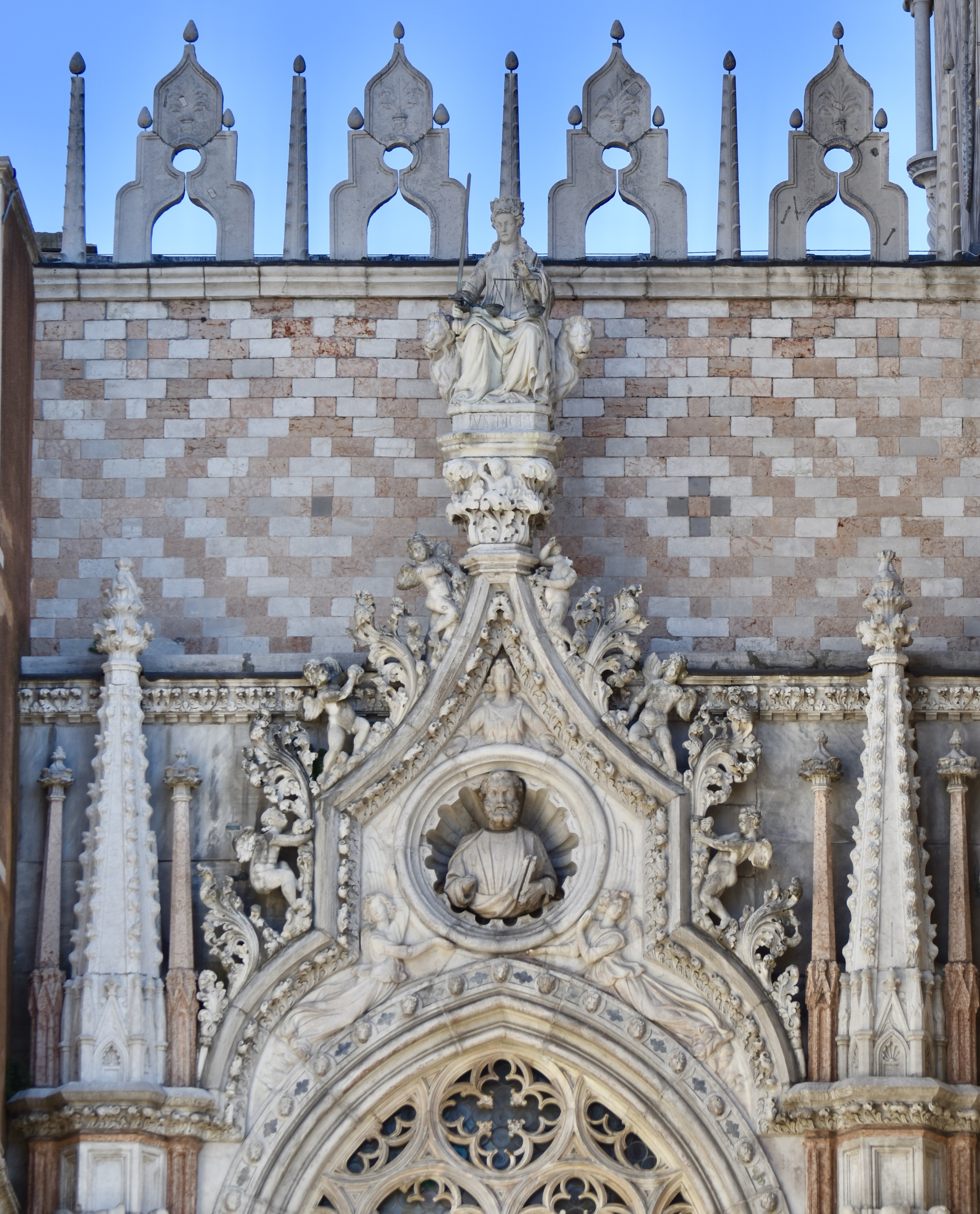 At the very top we can admire a sculpture that represents Justice, that seems to have been elevated to such a high position by the pinnacles and the luxuriant foliage at the sides of the arch with Moorish influence. We can be sure it is Justice, and not a personification of Venice, because of the inscription Justitia at its basis… although it is also true that quite frequently the images of Justice and Venice tend to merge in the Venetian iconography. 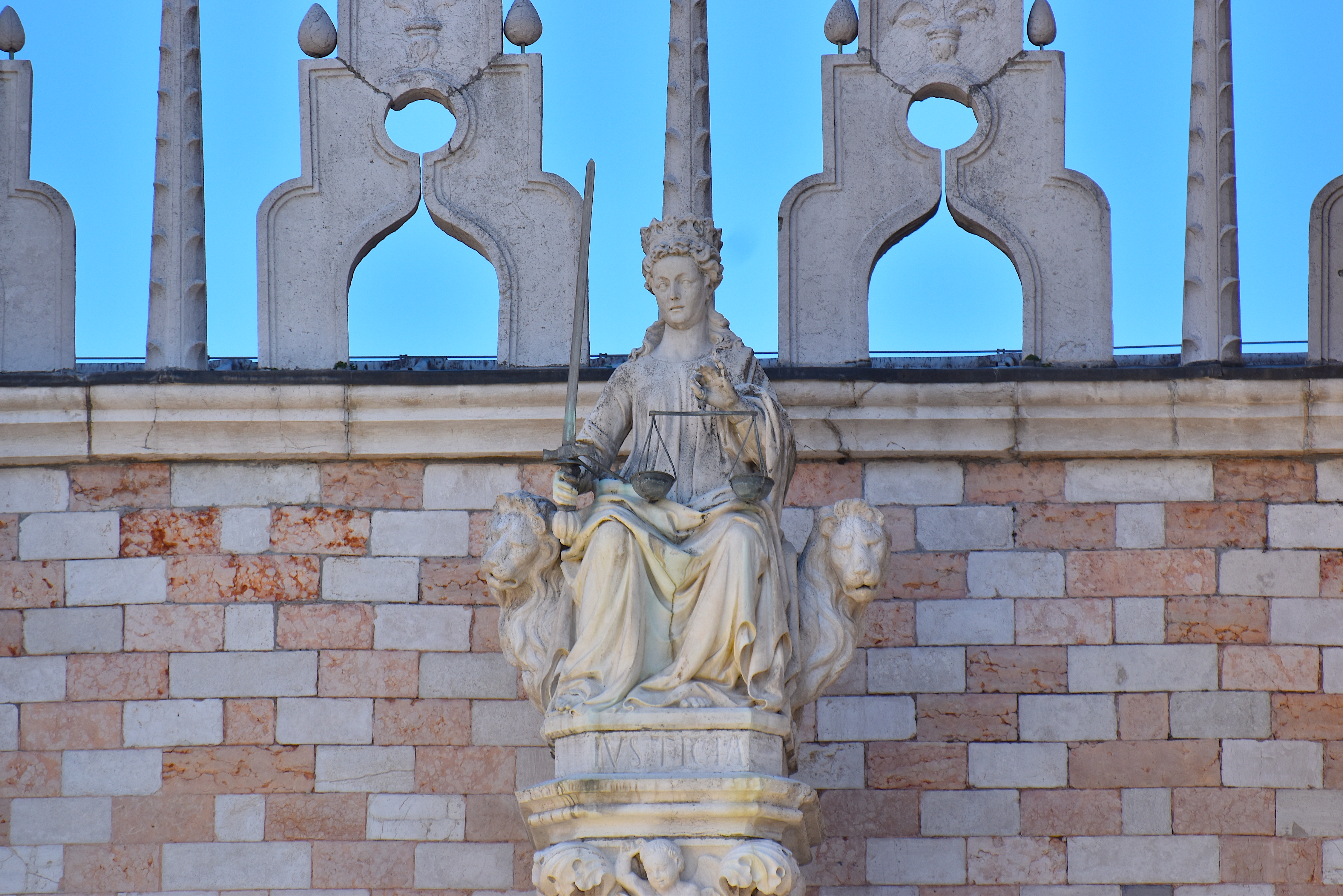 Right underneath we can see an image of St. Mark, the patron saint of Venice, in a circular frame supported by two angels. 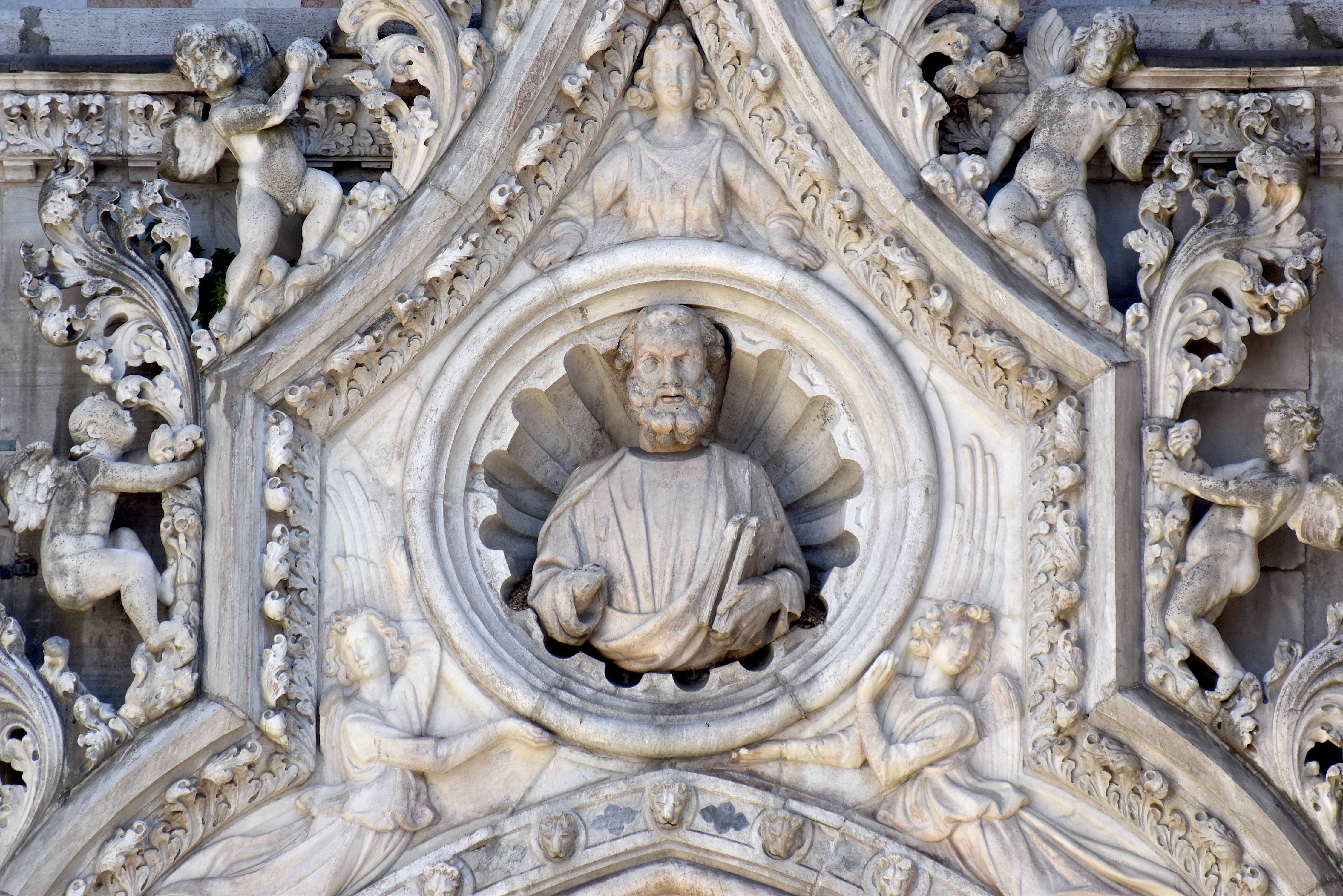 The Window and Francesco Foscari 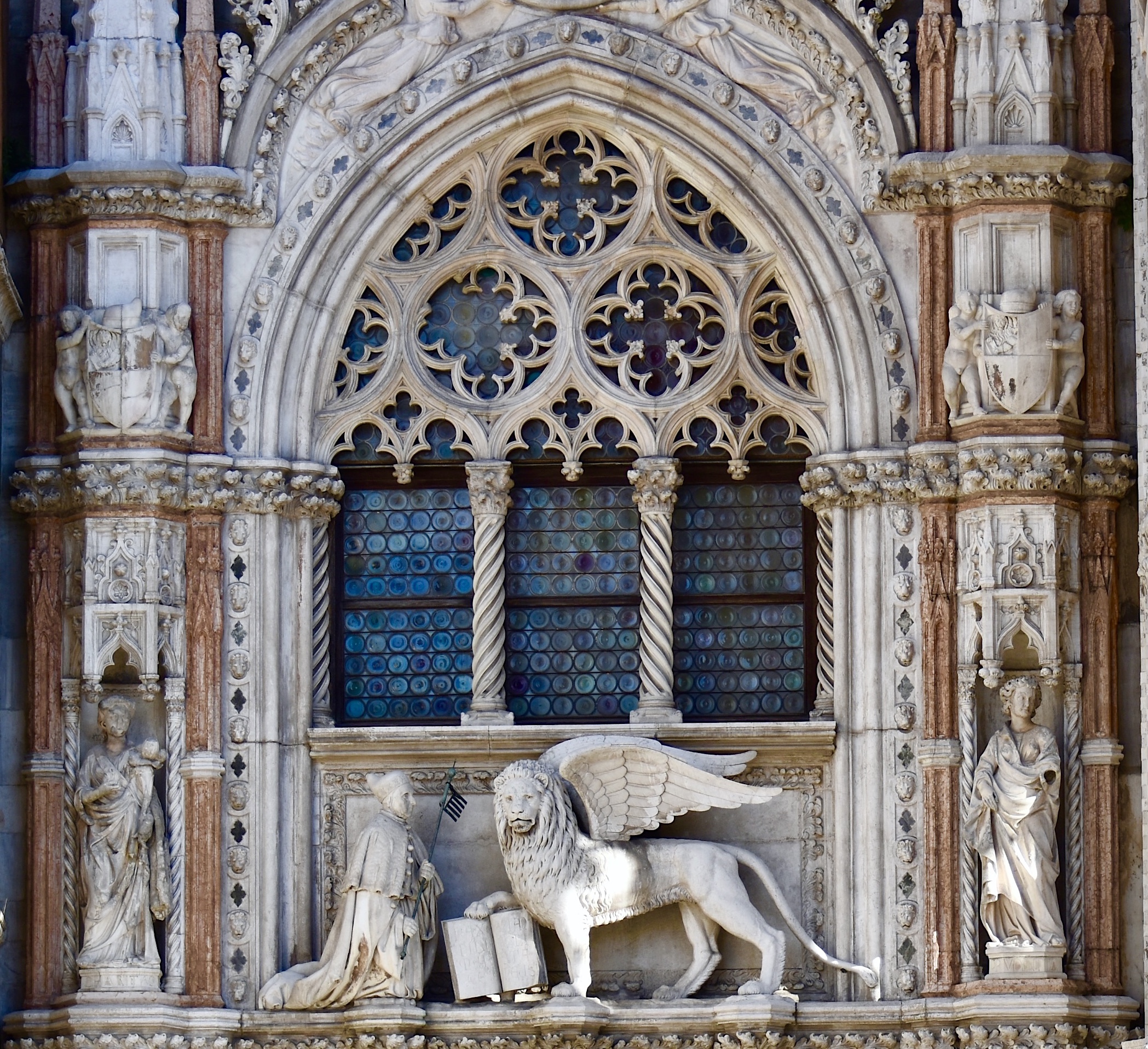 The large window consists of pieces of bottle bottom glass (produced with a particular blowing and pressing technique which allowed to obtain perfectly circular forms) and then inserted in a lead framework. The top part of the window appears so elegant with its marble decoration that reminds of Burano lace. 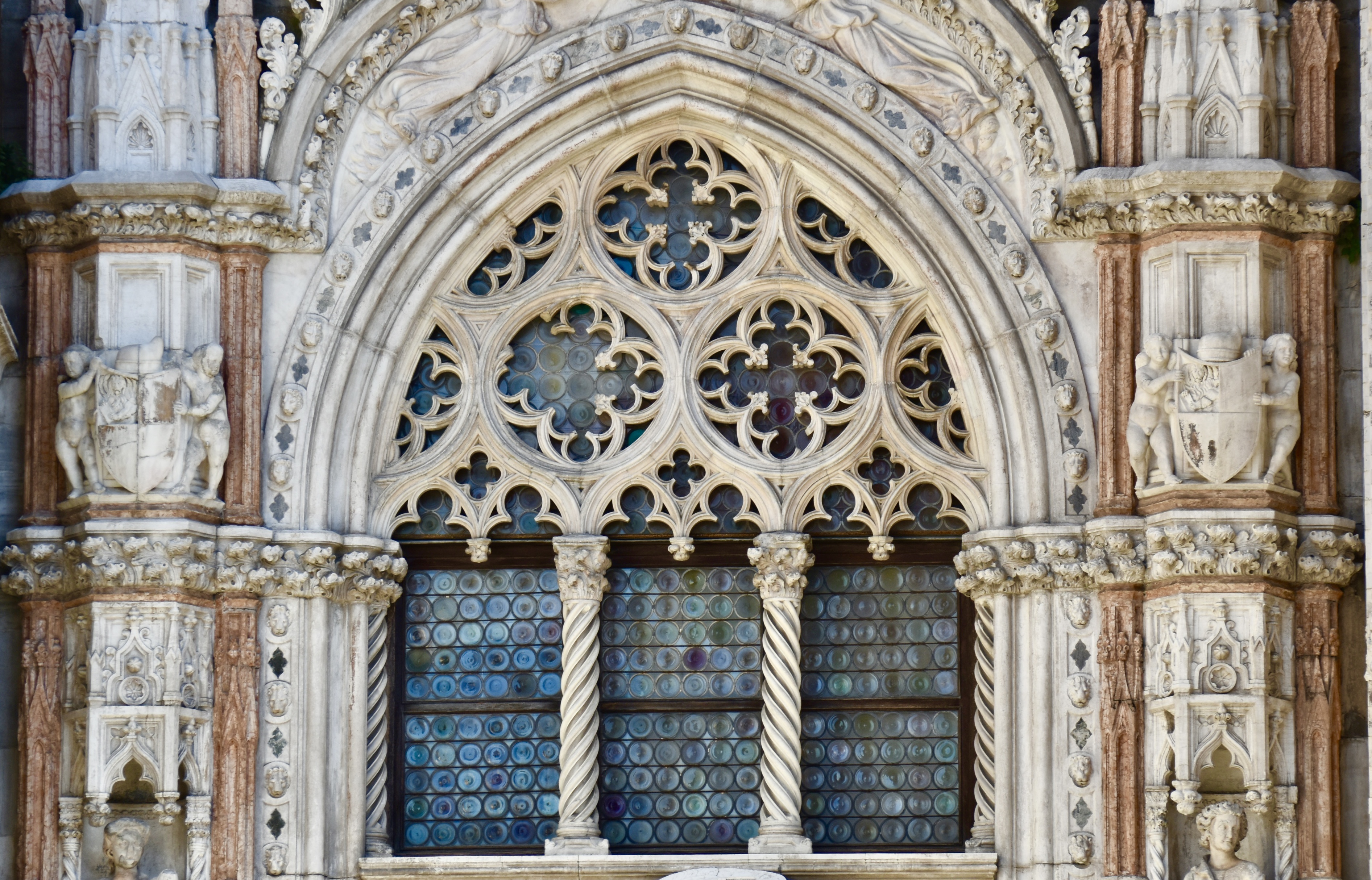 In front of St. Mark’s Winged Lion Doge Francesco Foscari kneels down. The Porta della Carta was built, in fact, when he was in charge. Unfortunately, the original sculptures of Foscari and the Lion, so incredibly perfect, were destroyed in 1797 by the Napoleonic fury, and the images we see today are just replicas that date back to the 1800’s… only Foscari’s head, so precise and expressive, has survived, and it is now preserved inside the Doges’ Palace. 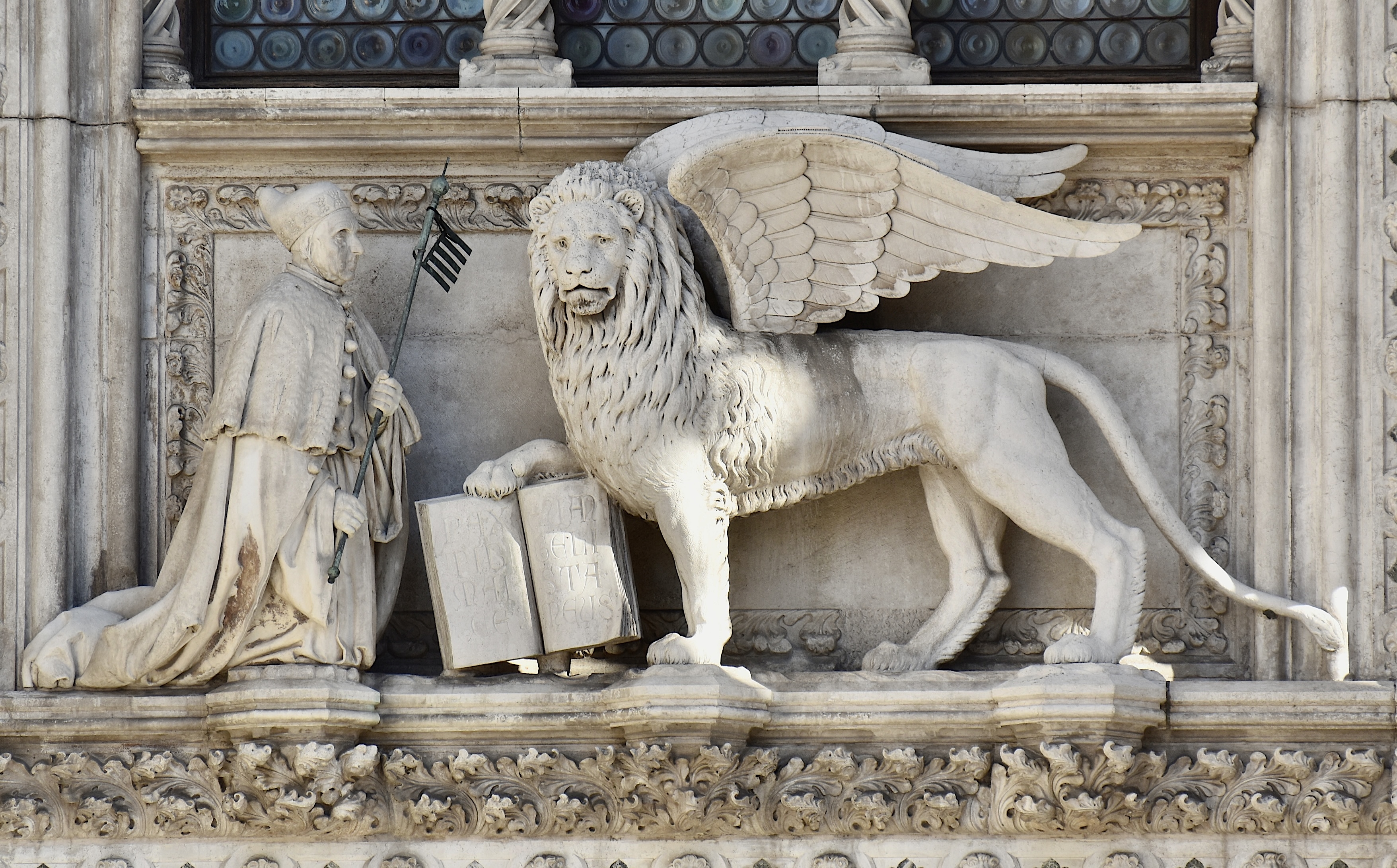 At the sides of the Portal we can notice four feminine sculptures: in the upper niches we find Charity and Prudence, unfortunately not very expressive, whereas in the lower niches we can admire Fortitude and Temperance, in their elegant habit, underlined by the folds of the clothes that wrap these figures diagonally.
Fortitude holds a shield, but the sword thai it once held in the other hand is now gone. 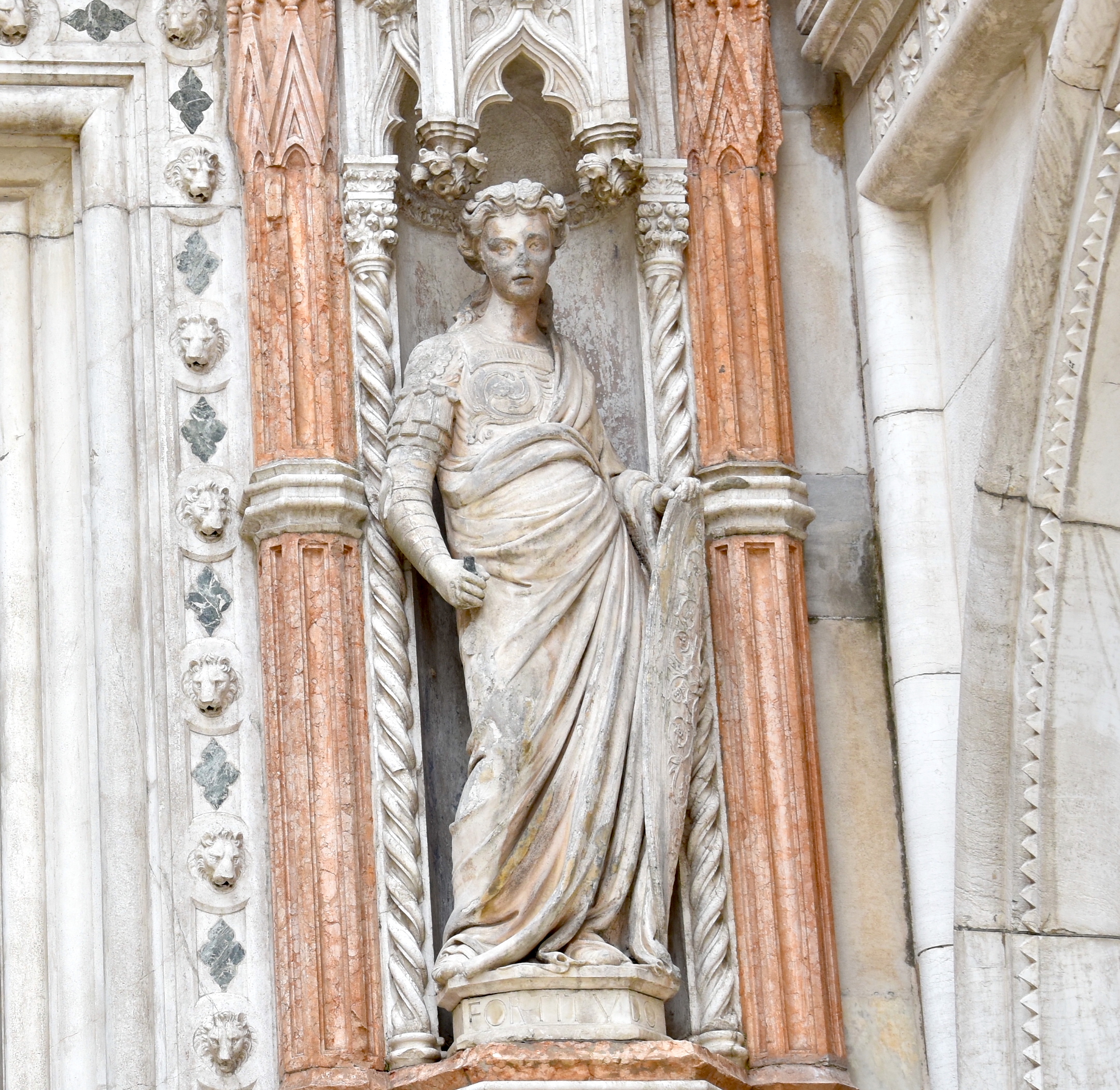 Temperance carefully mixes the wine in the cup with water, in order to prevent anyone from becoming too aggressive by drinking too much alcohol. 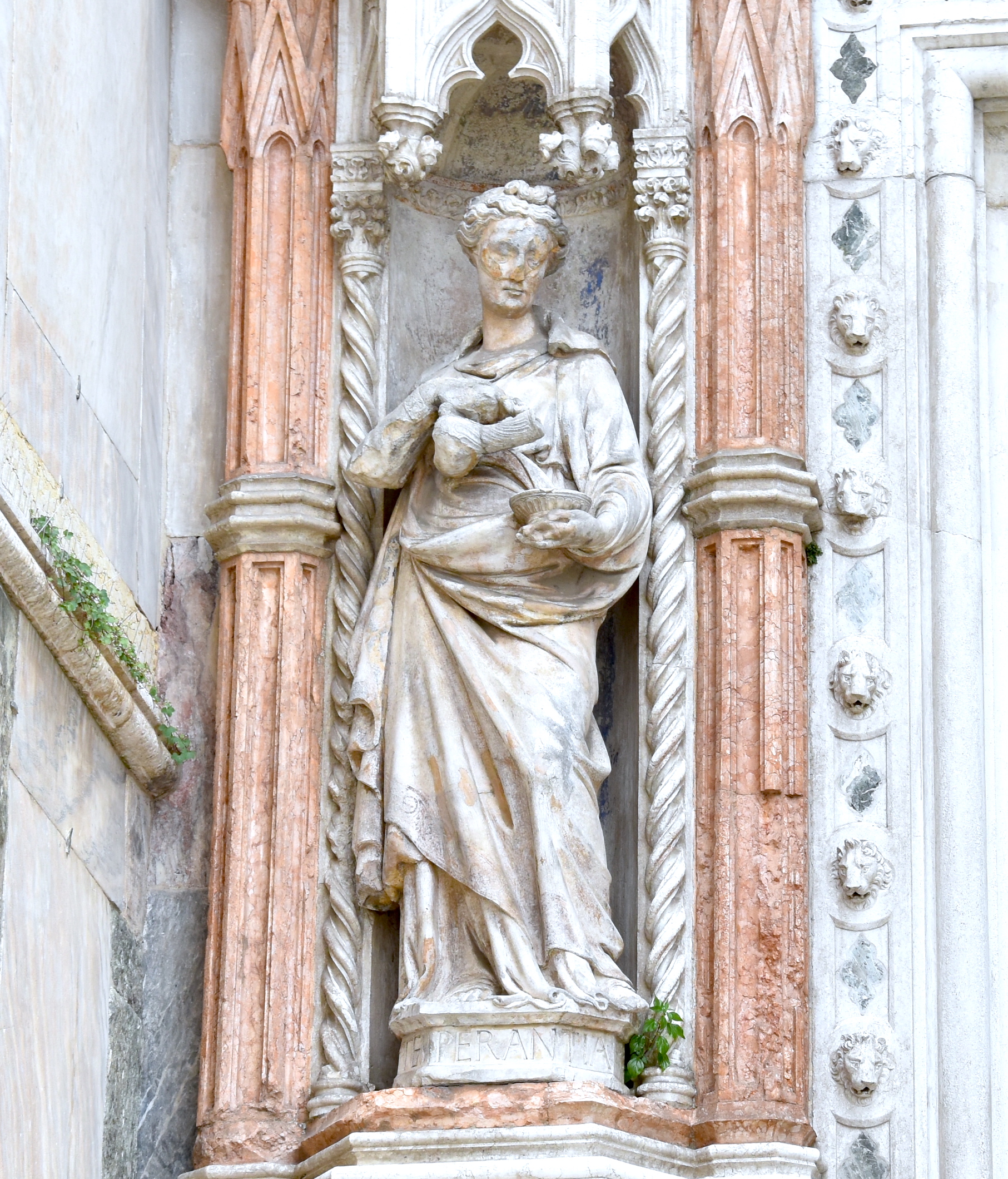 But how did the Porta della Carta look like in the 1400’s? Let us unveil a secret: at the Accademia Galleries in Venice we can admire a 1400’s photograph of St. Mark’s Square: we are talking about a painting by Gentile Bellini which reproduces the Square at the end of that century, and the Porta della Carta is also represented.

Have we awakened your curiosity? Come and meet us in Venice if you would like to learn more! See you!
Contacts: info@guidedtoursinvenice.com

A tailored guided tour in Venice: the lions'mouths. (section: Blog)

The best of Venice: what to see. (section: Blog)

Saint Mark's basilica in Venice: the mosaics on the facade. (section: Blog)

Our guided and private tours of Venice. (section: Blog) 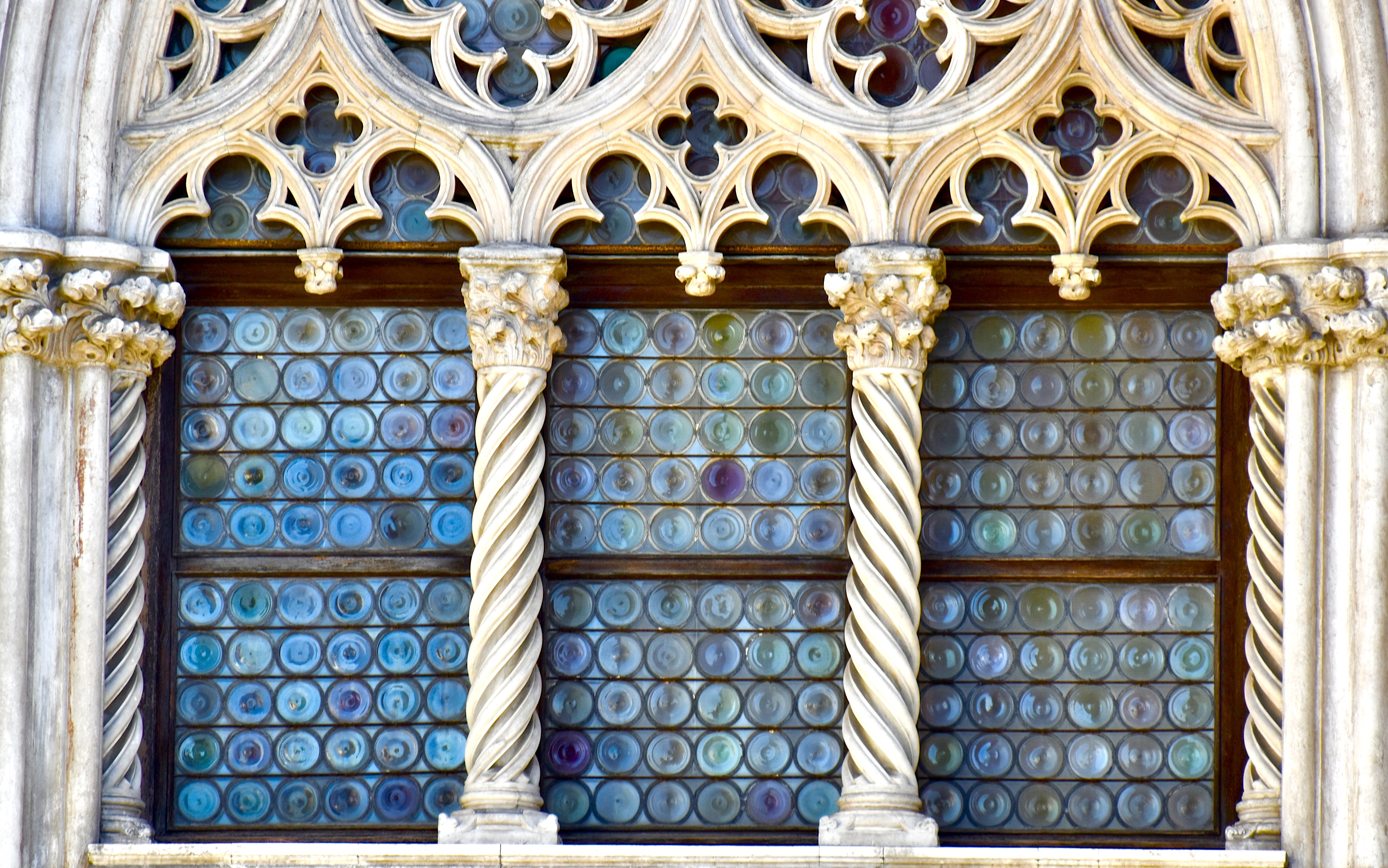