Saint Mark’s Basilica in Venice: the mosaics on the façade

Discover with us the awesome mosaics of the Basilica During a guided tour in Venice, we normally tell the story of St. Mark the Evangelist, the patron saint of our city, whose relics rest inside the Basilica. 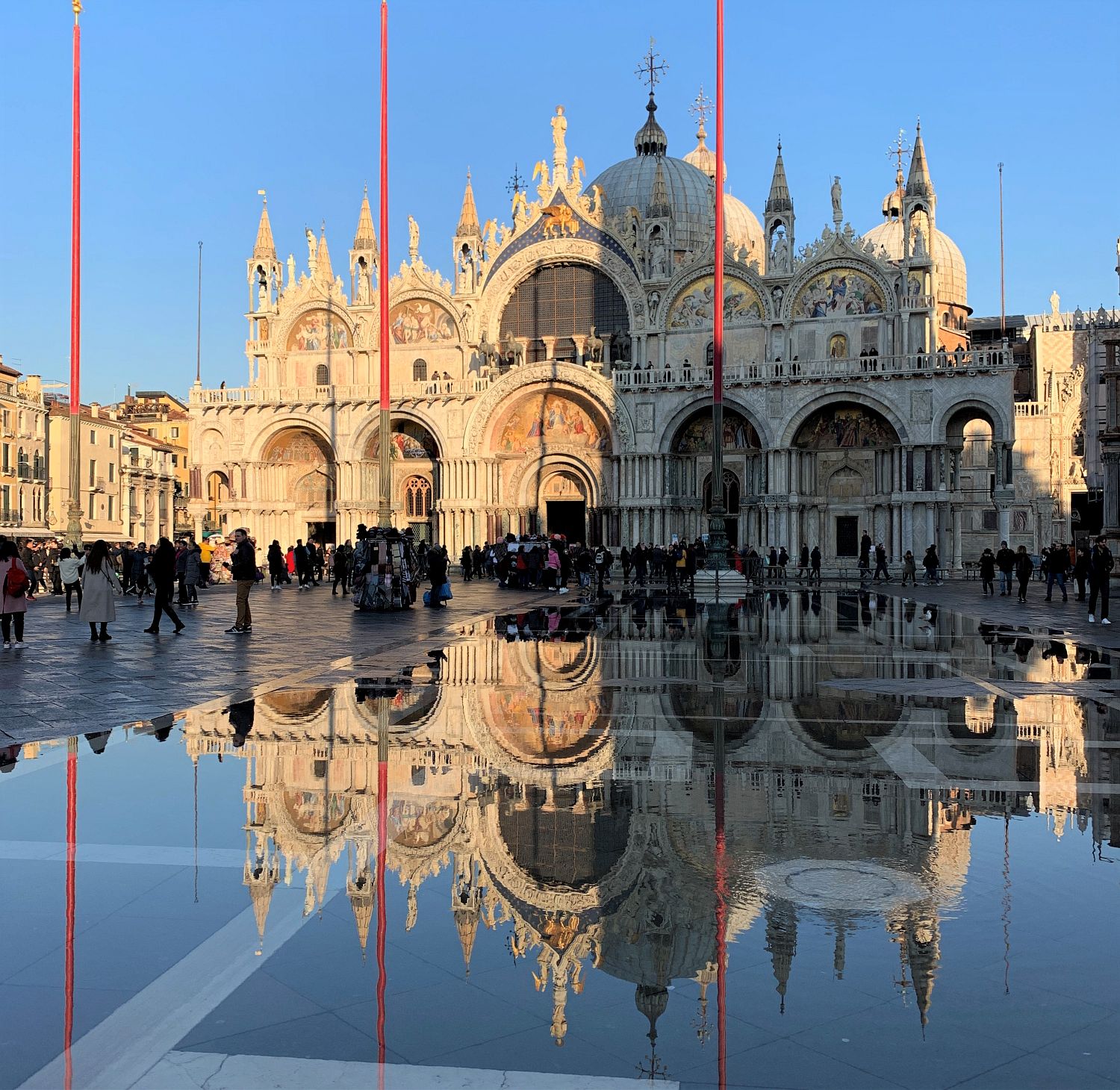 St. Mark’s Dream
St. Mark was sent by St. Peter from Rome to Northern Italy, with the aim of converting more people to Christianity.
In the city of Aquileia he converted Ermagora, who, in his turn, eventually became the patron saint of that city.
Then Mark left Aquileia to reach Alexandria of Egypt, but during the trip, after a shipwreck he landed on the islands of the Venetian Lagoon.

On the night right after the wreck, Mark dreamt of an Angel who addressed him with the words: “Pax tibi, Marce, Evangelista meus. Hic requiescet corpus tuum” (The peace be with you, Mark, my evangelist. Your body will rest in peace right in this place).
He then continued his trip to Alexandria, and when he reached that city, he had a church built there. He made several miracles, but he was then persecuted and killed by the pagans.

The first mosaic from the right shows how St. Mark’s body, stolen in 828 A.D. by two Venetian merchants, Bono from Malamocco and Rustico from Torcello, was hidden in a large basket, covered with fruits, vegetables and pork.
The reactions of the Egyptian custom officers, at the sight of pork, are quite explicit, as you can see in the mosaic: one of them pinches his nose, another one turns away showing disgust. 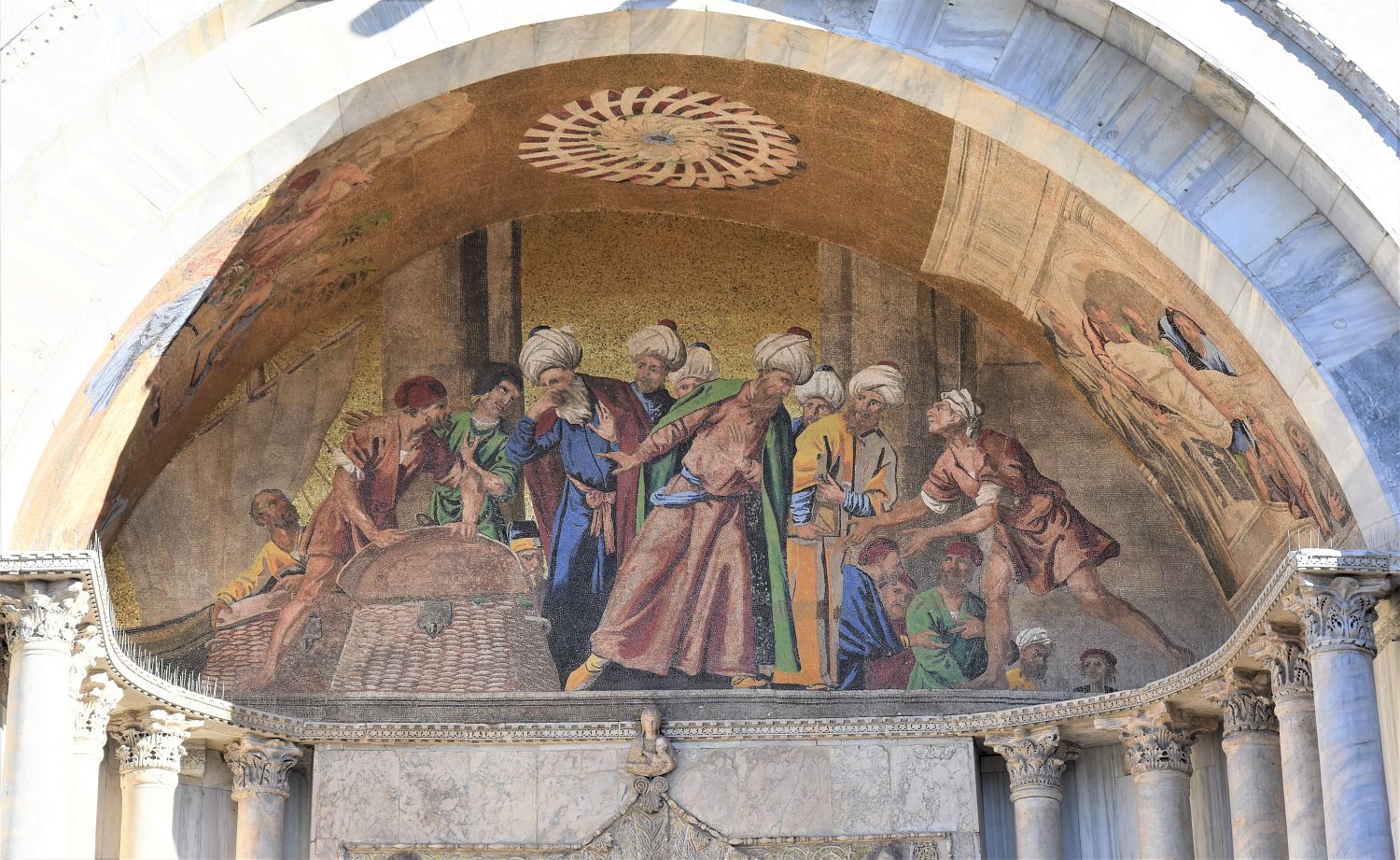 Thanks to this trick, it was passable to embark the relics for the long journey to Venice.

The second mosaic from the right shows then the arrival of the relics in Venice: on the ship we can distinguish the two merchants and the relics themselves, wrapped in white sheets. 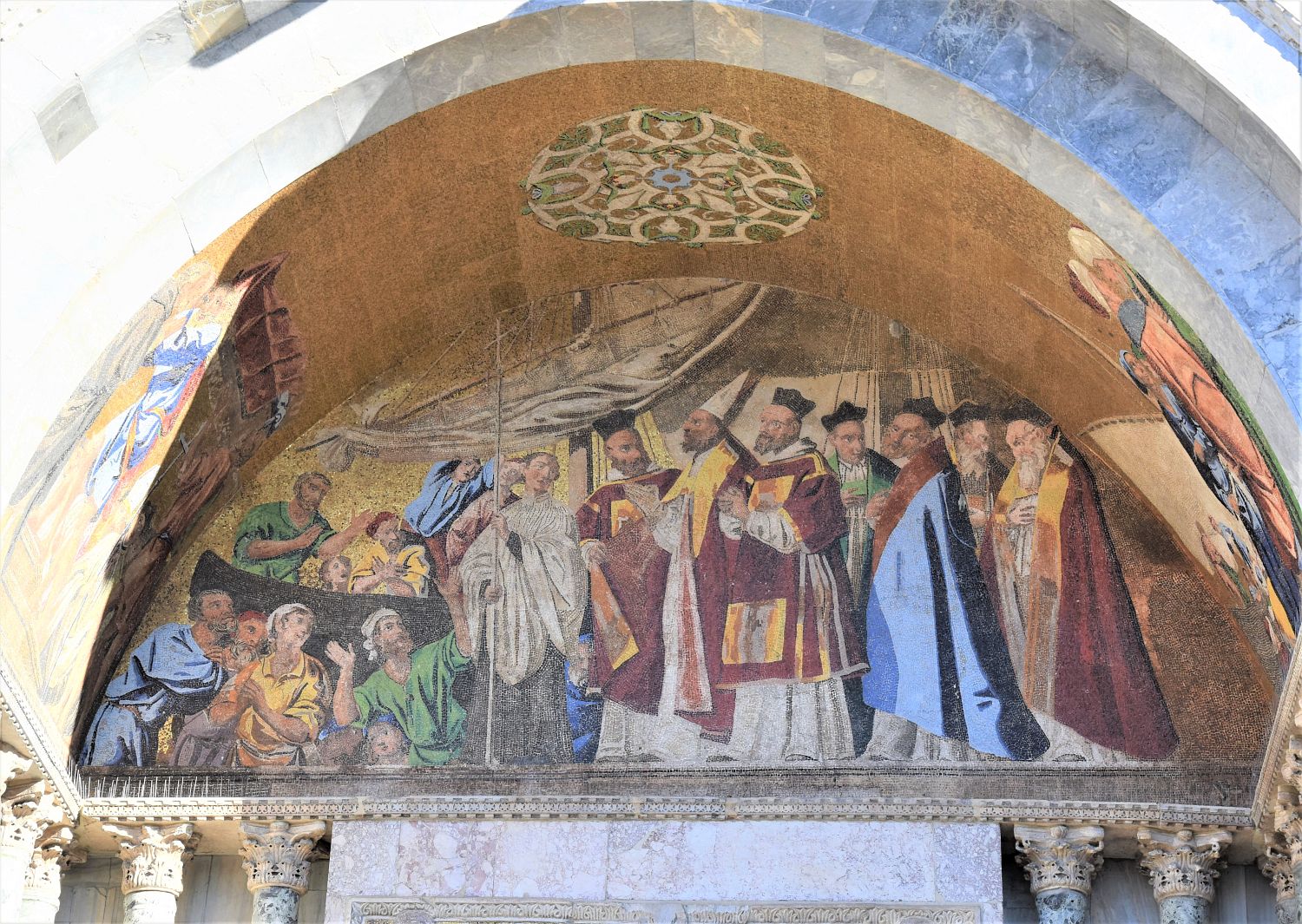 The arrival of the relics in Venice

In the third mosaic we can see Doge Giustiniano Partecipazio and the government of the Republic in adoration of the relics.
St. Mark’s body is now covered with a blue sheet, and the Doge, in his golden clothes, opens his arms wide and stares at the important relics. 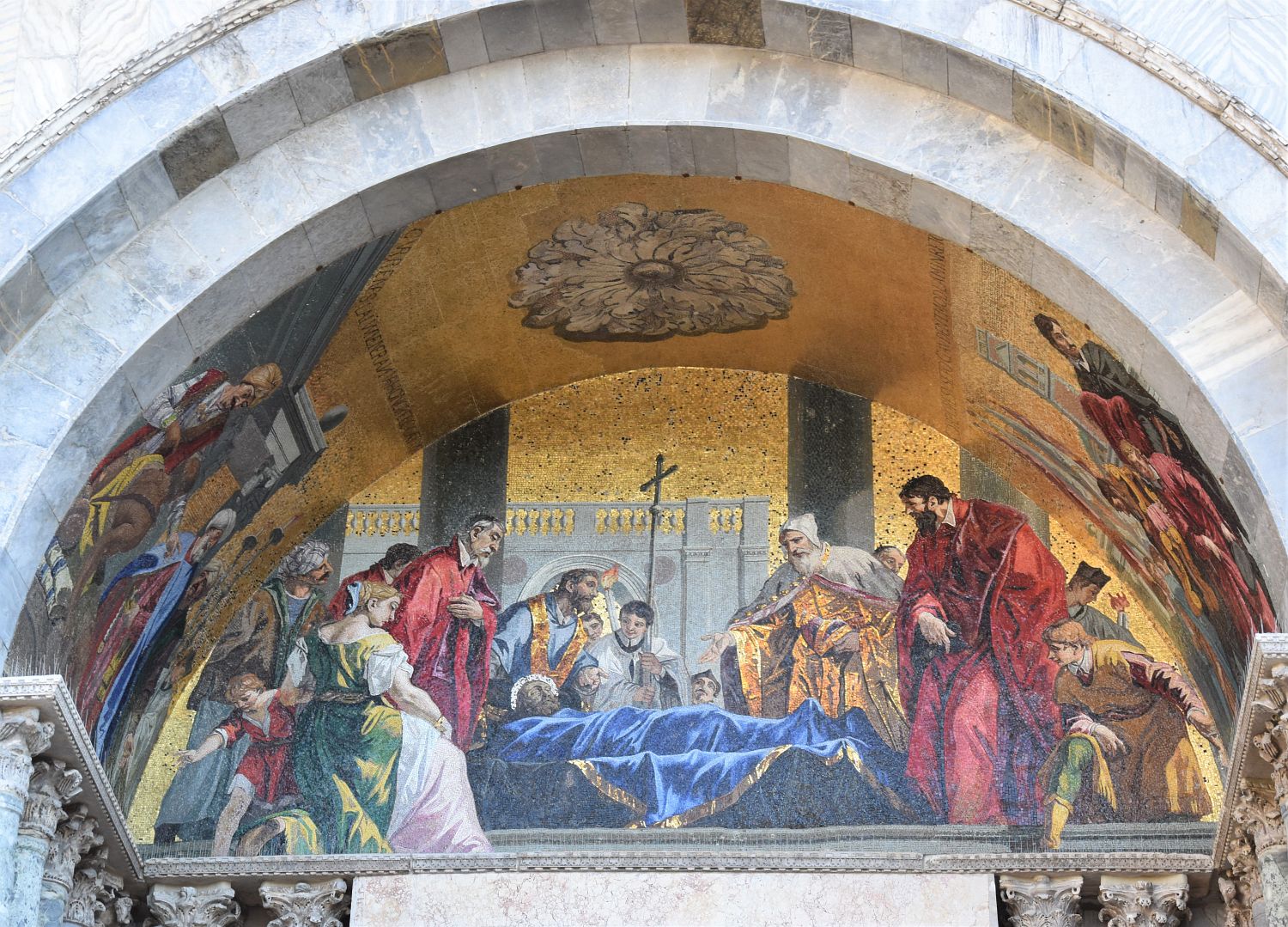 The Doge in adoration of the relics

The fourth mosaic is actually the most ancient among all the mosaics on the façade: in fact, it dates back to the 13th century.
It represents the moment when St. Mark’s body was carried into the Basilica, built in his honor. The style of this work of art is clearly Byzantine, with a very bright golden background (obtained by using 24 carat gold leaf) and the typically hieratic figures. 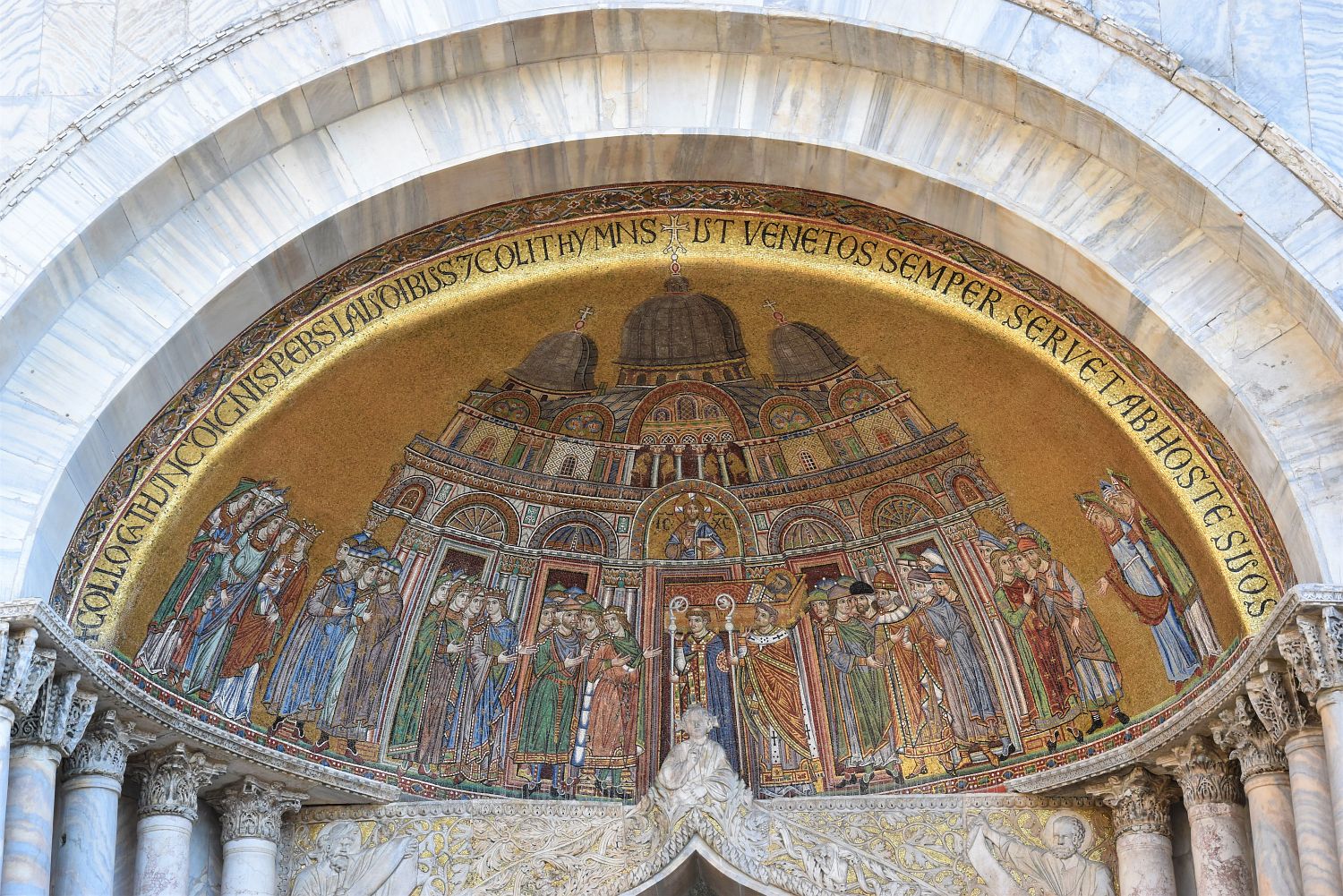 The fourth mosaic in Byzantine style 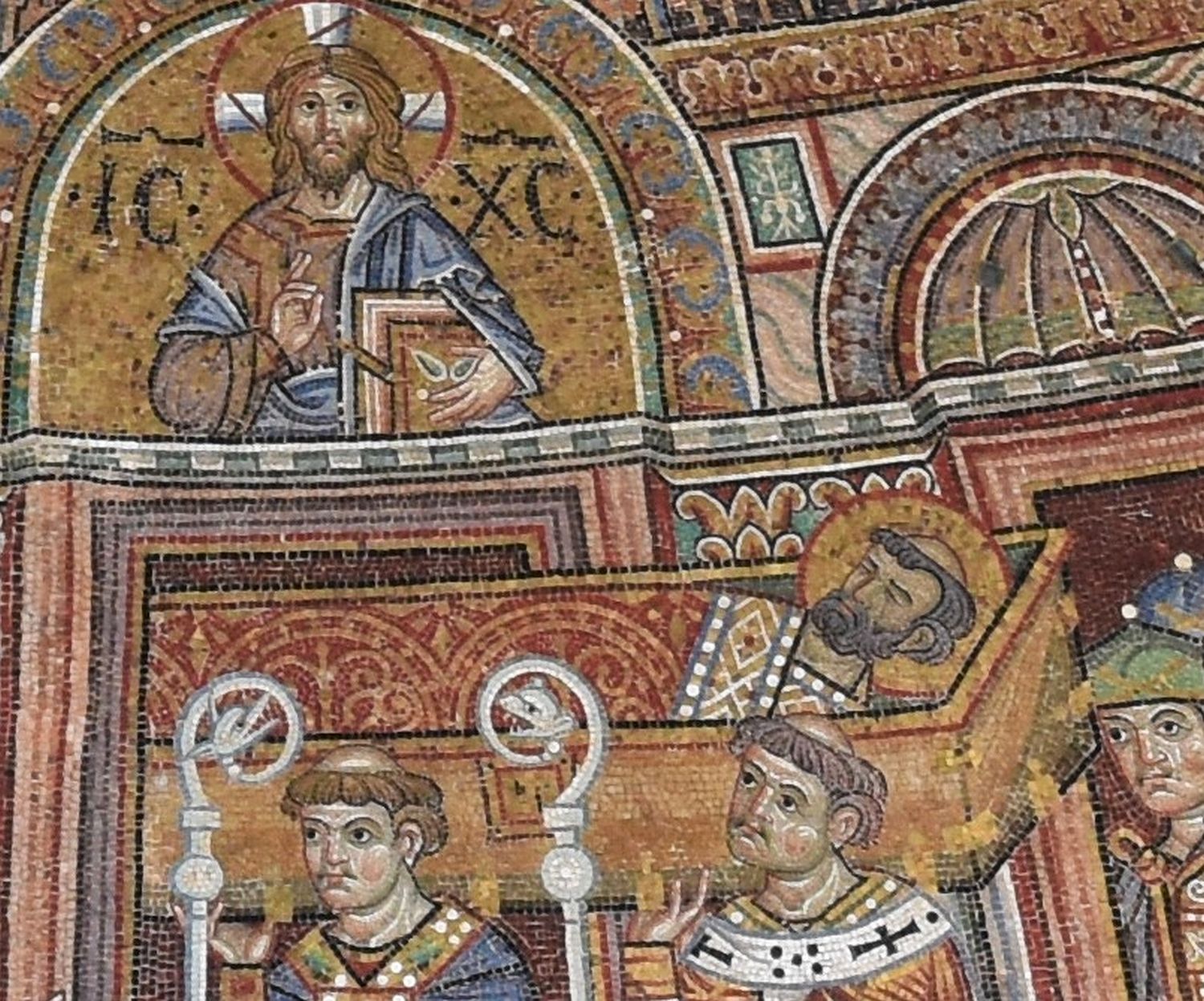 Ask us for a guided tour of St. Mark’s! It will be a pleasure for us to show you the mosaics in the narthex and inside the church itself.
See you! Ciao!