A masterpiece by the great renaissance painter... On a guided tour of the Doges’ Palace in Venice everybody is literally captured by the grandeur of the decorations in the Institutional Halls.
The ceiling of the Collegio Hall is particularly amazing, one of the most beautiful in Italy, a major masterpiece painted between 1575 and 1578 by a great master, Paolo Veronese. 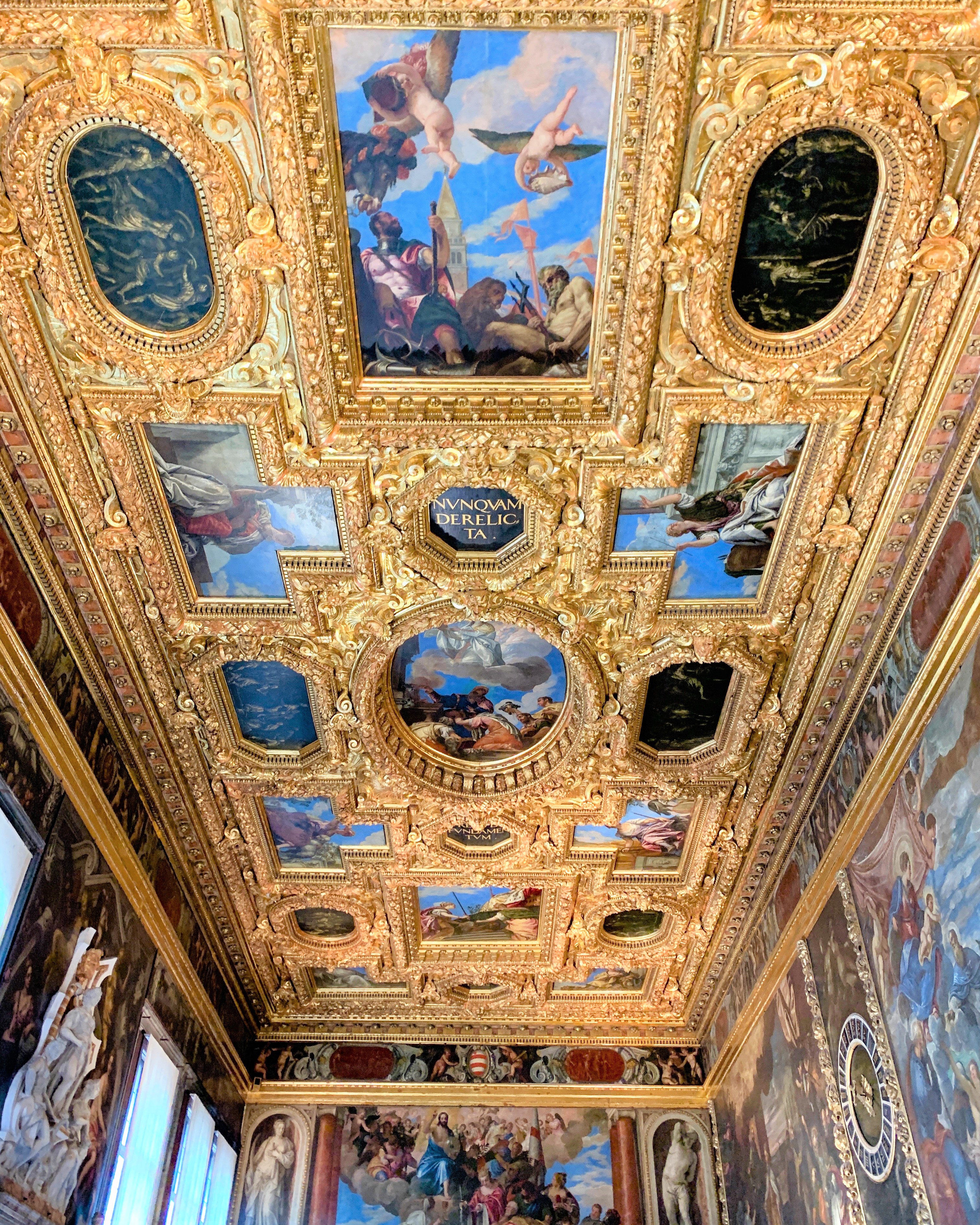 The three central canvases are simply sublime: they catch our attention with their bright colors, the blue sky, the daring foreshortening, all typical elements of this master’s style. 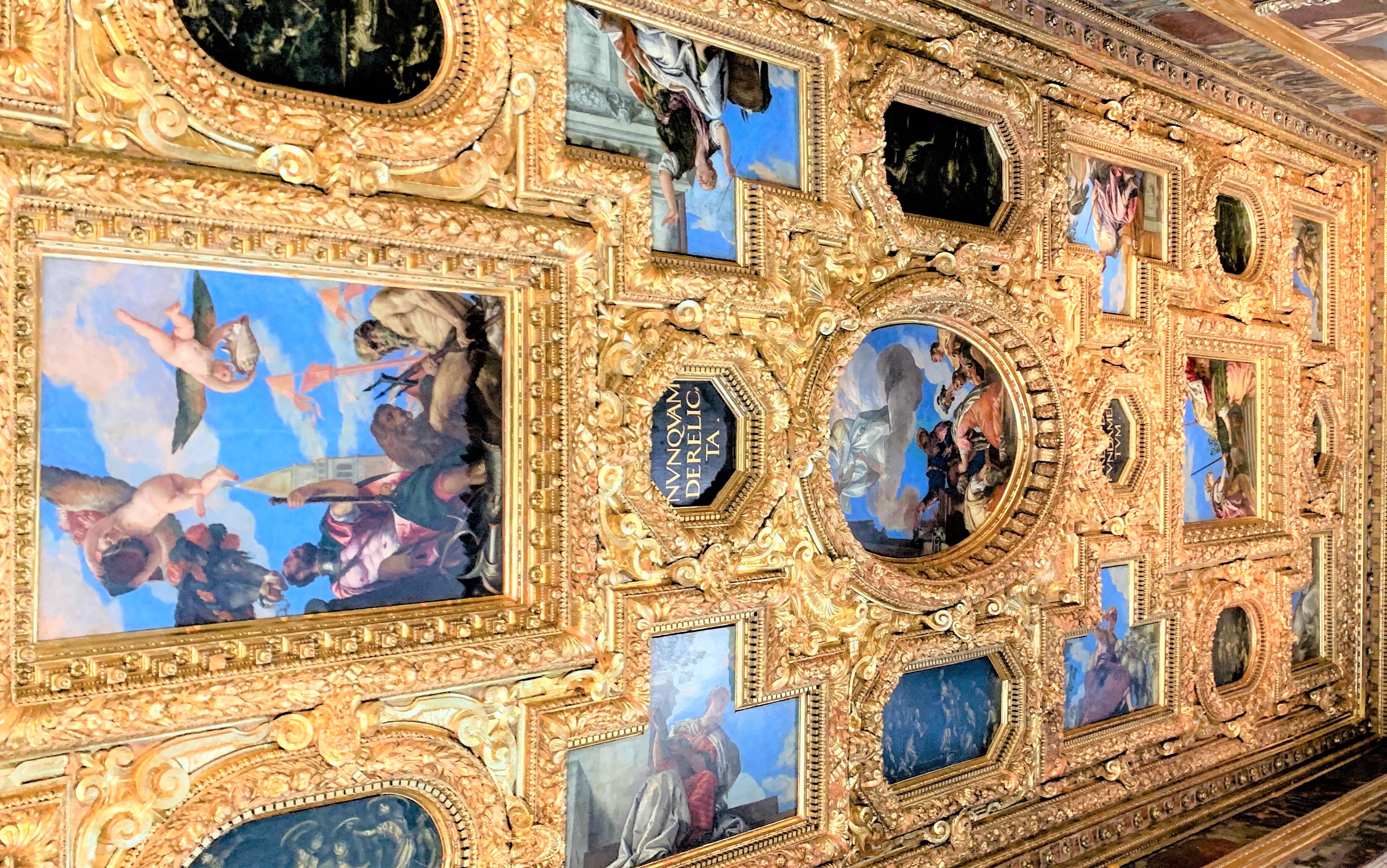 The ceiling of the Collegio Hall

The council called Collegio consisted of the Doge, his six counselors (one per district) and the three chiefs of the tribunal called Quarantia. It included also the the Great Elders (Savi), entitled to foreign affairs, the Elders of The Mainland and the Elders who took care of maritime issues.
In this room, the Republic received foreign ambassadors and discussed problems of public interest. Moreover, this council prepared the important issues that had to be eventually discussed in the Senate.
The three central paintings of the ceiling had the purpose of celebrating the Republic and its good government, its councils, its independence and power. They were meant to impress all those who entered the hall, and possibly to intimidate them with the magnificence and the wealth of the decoration.

The first important painting, closer to the entrance, represents Mars and Neptune, who symbolize the Venetian power, both in the mainland and at sea: the two putti, in fact, hold a shell and a helmet, the attributes of these two divinities. St. Mark’s bell tower stands in the middle, to stress the dominion of the Republic. Between the two mythological figures we find the omnipresent Winged Lion, the symbol of St. Mark and of Venice itself. 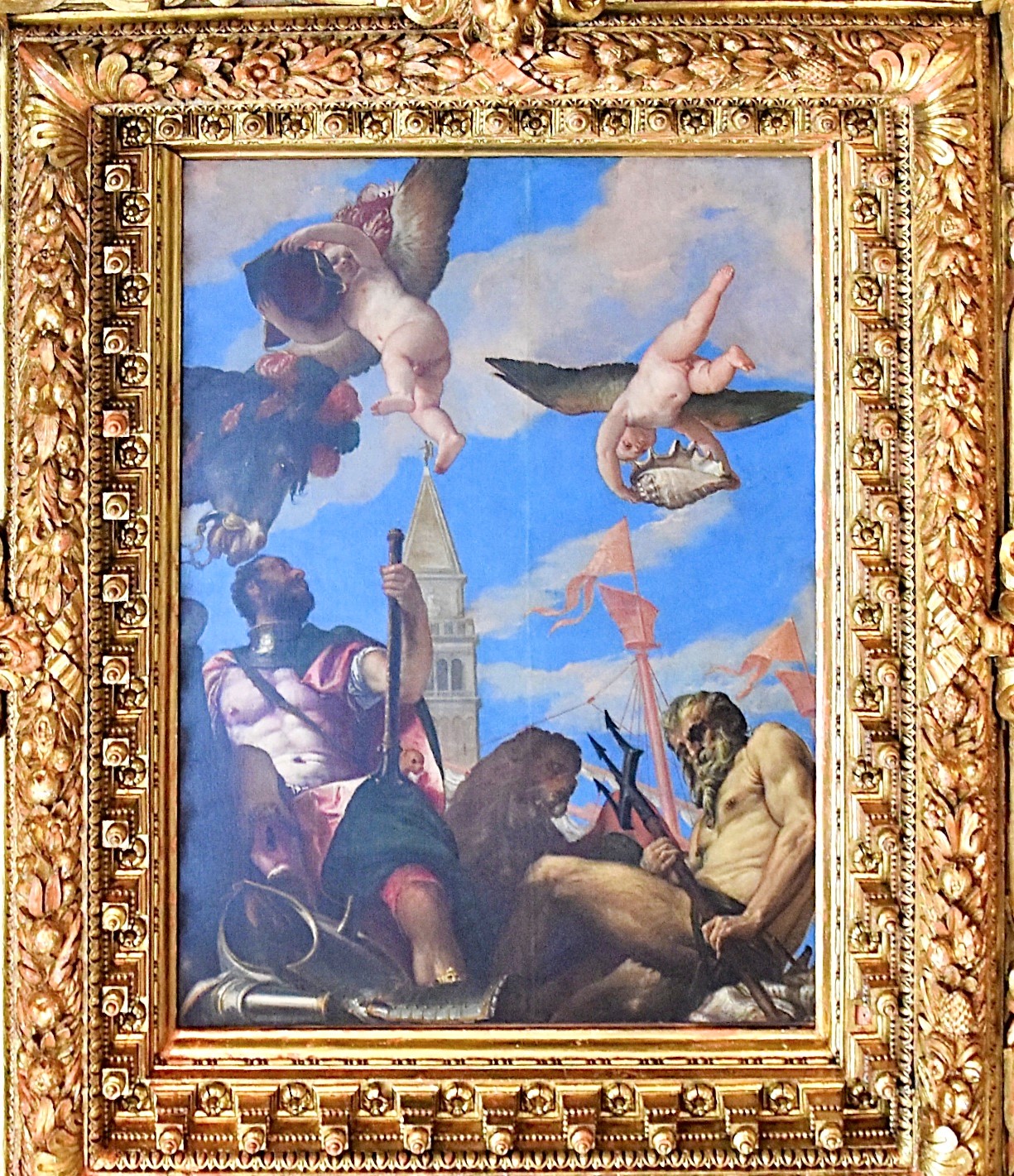 Venice and the Christian Faith

In the second painting, of oval form, the Venetians offer gifts and prayers to the Christian Faith, represented as a female figure dressed in white and holding a chalice, one of the symbols of the Passion of Jesus Christ. Venice used to underline in the official paintings its role as a Christian State, mainly because of its difficult relations with the Papacy. 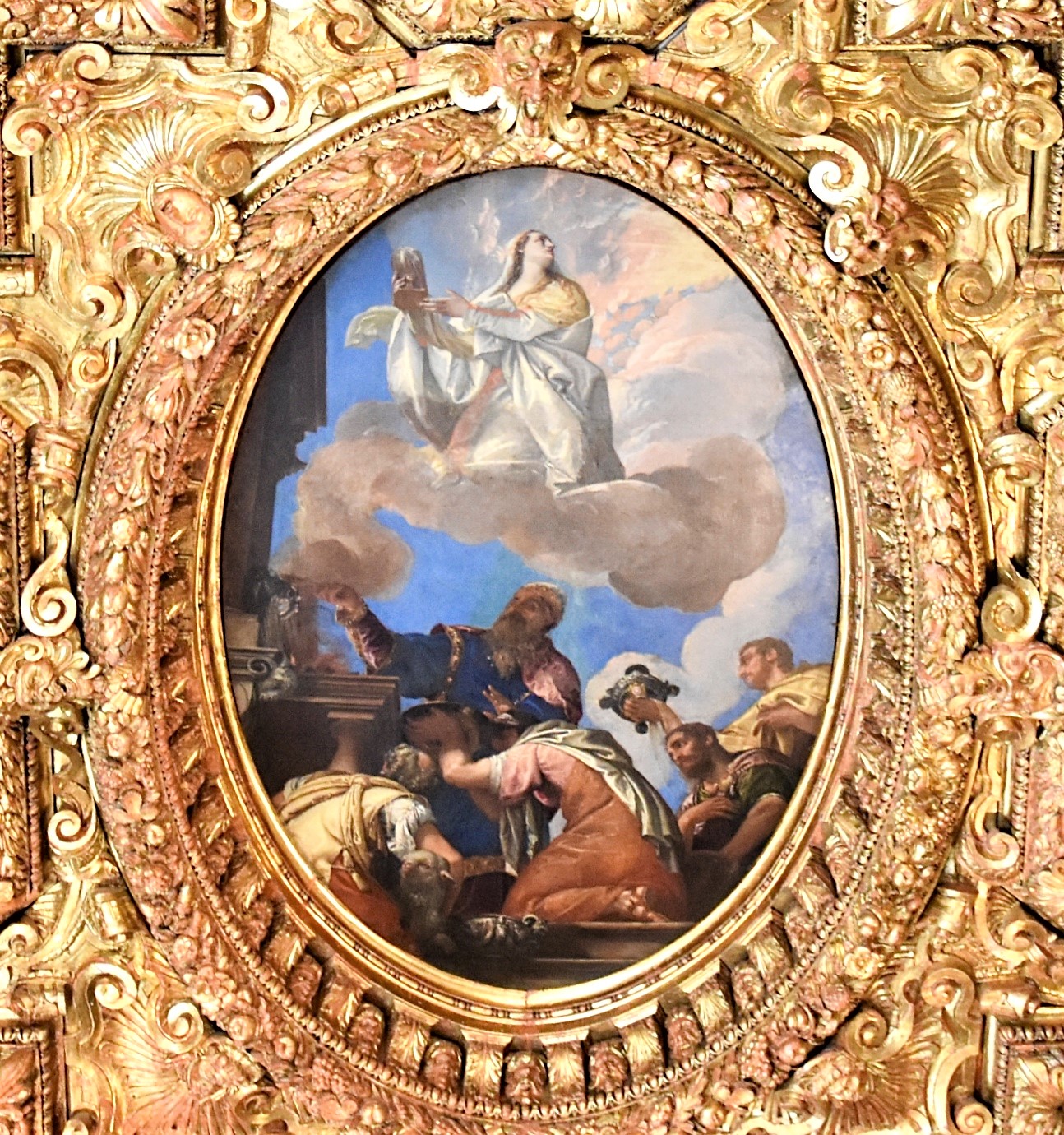 The Venetians pay homage to the Christian Faith

Peace and Justice before Venice

The third canvas, placed exactly above the seats of the members of the Collegio, shows Venice represented as a queen, dressed in white and golden clothes covered by an elegant mantle lined with ermine fur. Pay attention to her jewels, to her hairstyle, to the refined features of her face: they are so perfect that this figure has eventually deserved the title of one of the most beautiful creations painted by Veronese.
In one hand she holds the command stick; at her feet we finds the Winged Lion and two figures kneeling down in front of her: Justice and Peace. 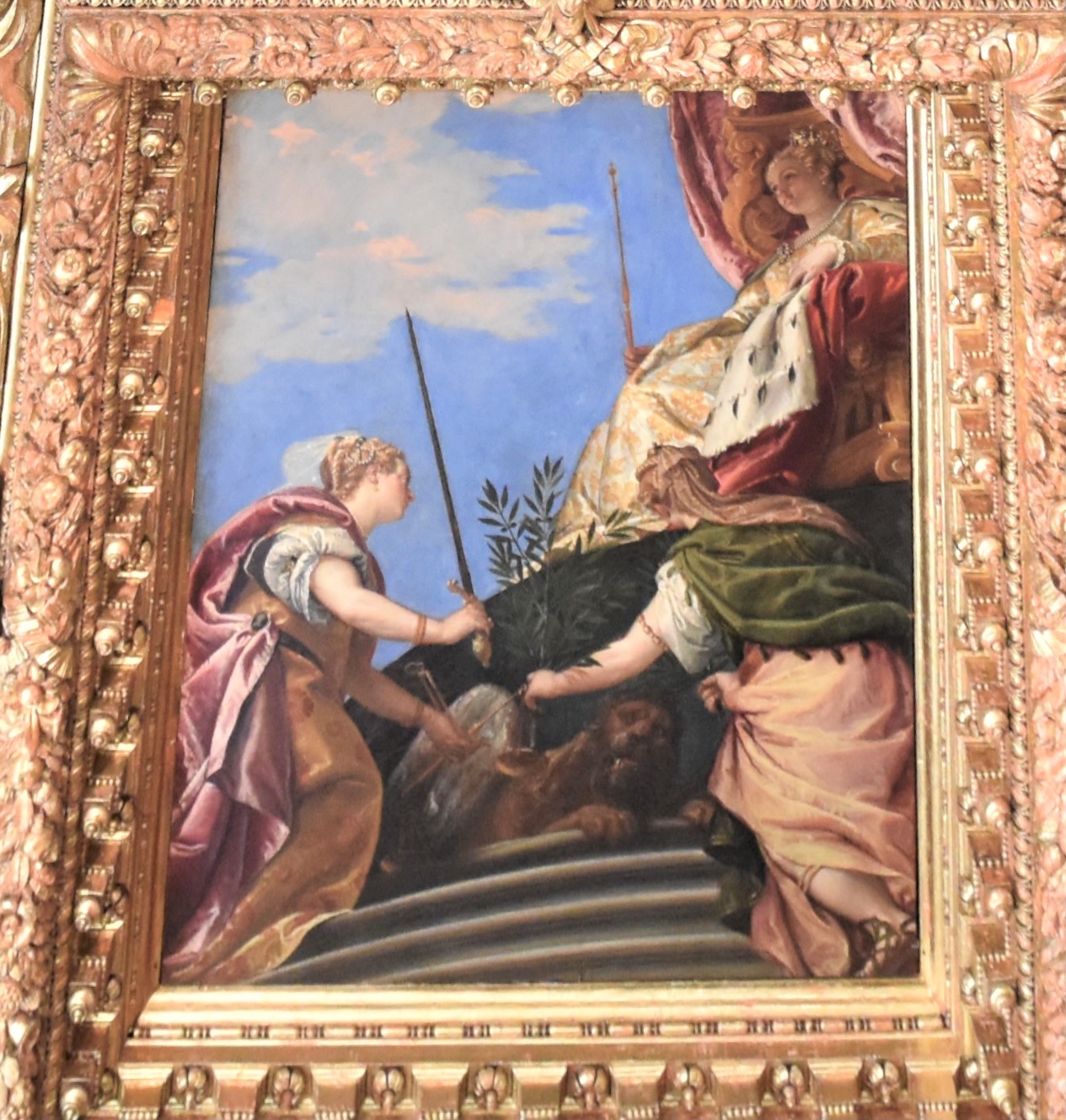 Justice and Peace in front of Venice

The fore mentioned paintings are undoubtedly masterpieces. The way the master paints jewels and fabrics is incredibly realistic: you have the illusion you can feel the softness, or the smoothness of the different materials, as if you could touch them…
The colors are really vivid and bright, typical of the Venetian tradition. The drawing is very accurate as we can see in the daring foreshortening of the figures and in the architectural elements.
Observing also the other canvases on the ceiling we can get a better idea of Veronese’s impressive style.
Moreover, these works of art are surrounded by precious carved wooden frames, covered with gold leaf: the Republic seems to underline that the paintings, with their important allegorical meaning, are of immense value, and for this reason deserve to be enriched, and protected, by the precious metal. 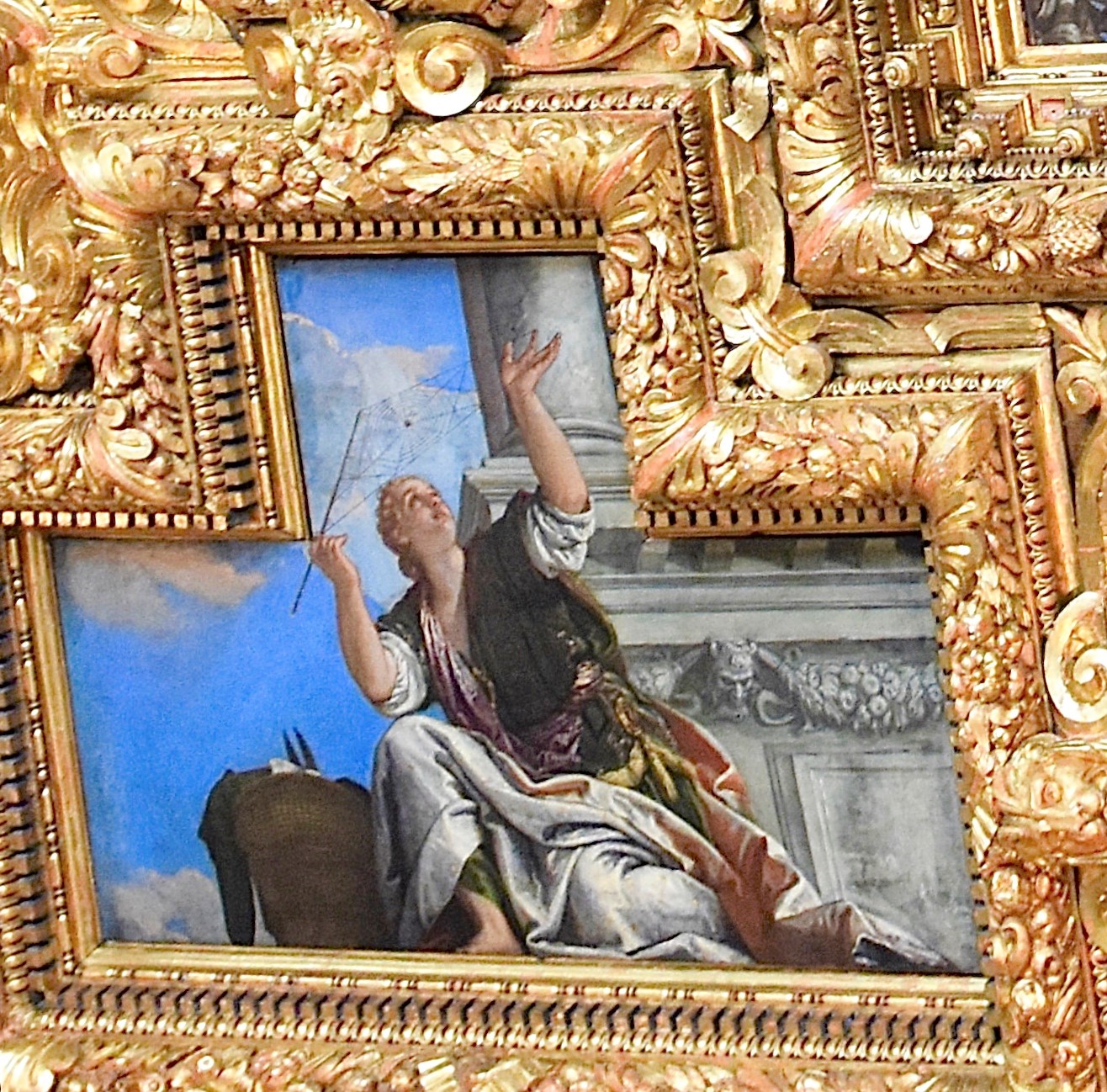 This short post is definitely not enough to express the magnificence of the Collegio Hall… so we will be waiting for you to take you on a guided tour in Venice!
Ciao!
Contacts: info@guidedtoursinvenice.com

The ceiling of Paolo Veronese of Collegio Hall of the Doge's Palace (section: YouTube) 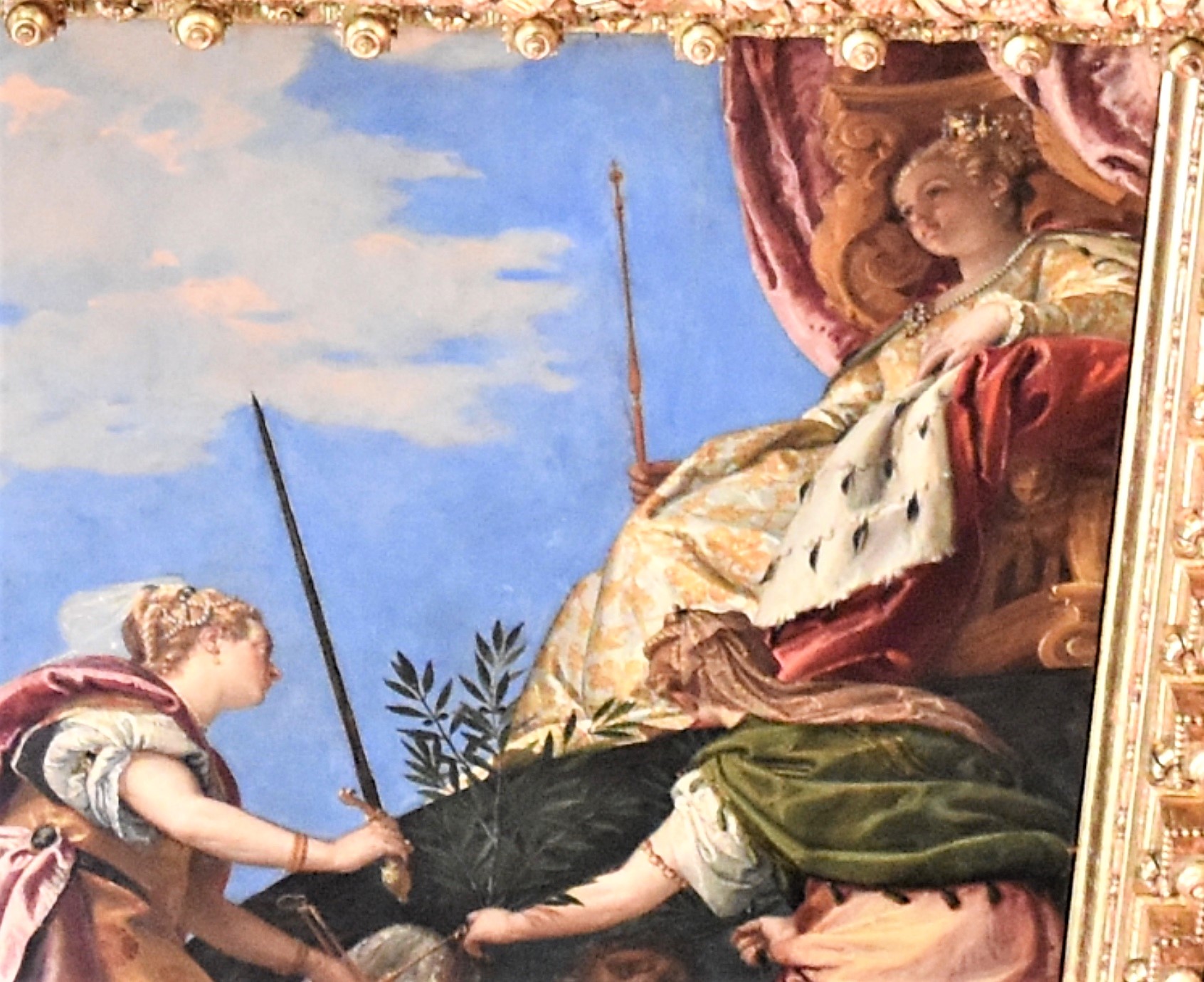