Masterpieces of the Renaissance style...

On a guided tour of the Doges’ Palace in Venice you will be able to admire the three masterpieces by sculptor Antonio Rizzo that have been recently restored.

Where were the three sculptures located?

The statues, representing Mars, Adam and Eve used to decorate the Foscari Archway, in the courtyard of the Palace. They were carved by the Veronese sculptor Antonio Rizzo around 1472, during the Early Renaissance period in Venice.

They were originally placed in niches. The two niches hosting Adam and Eve are those facing the Giants' staircase, which was also projected by Rizzo. Mars would instead occupy the niche facing the courtyard. 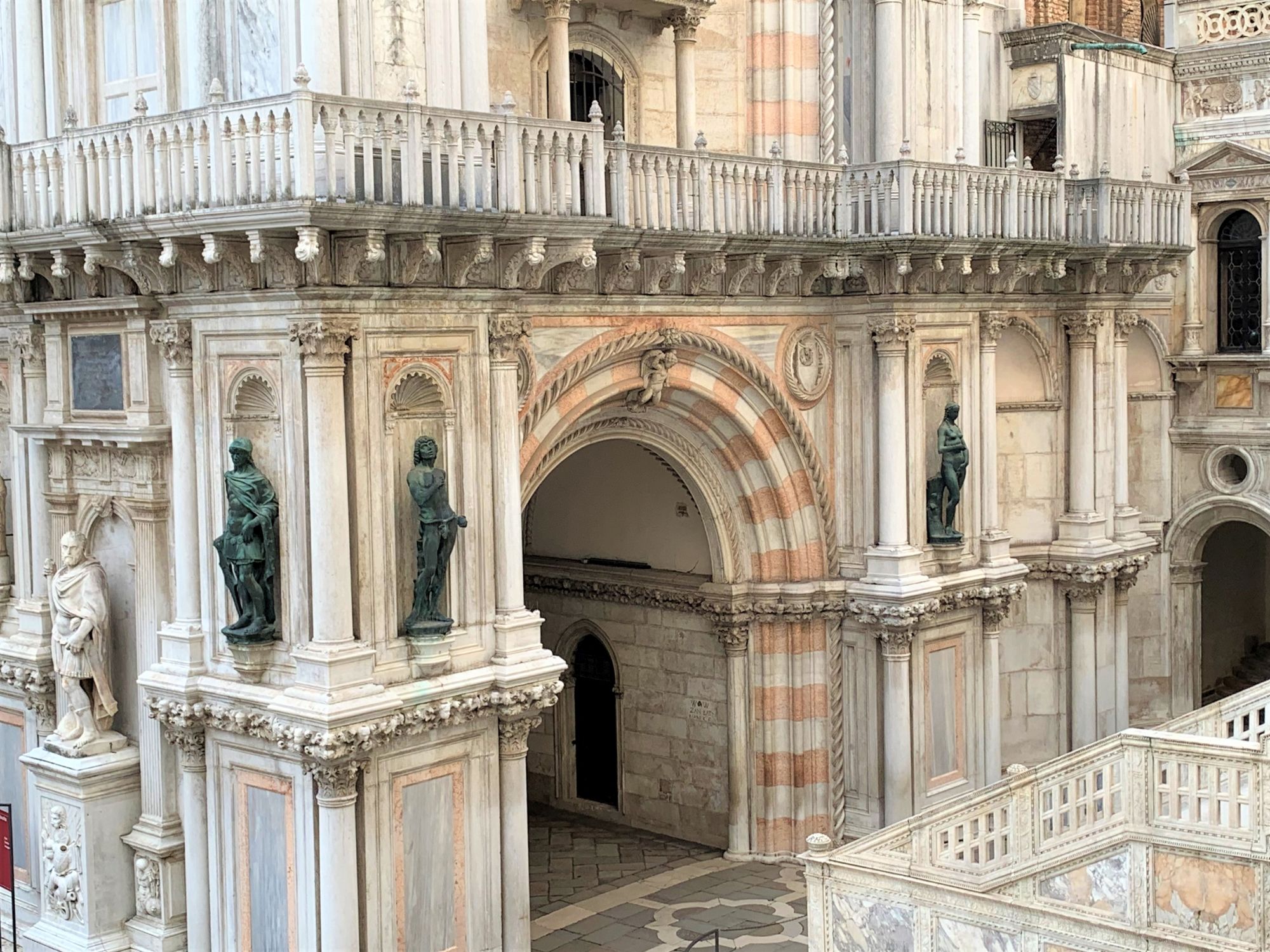 Due to their bad conditions, in 1926 the statues of Adam and Eve were moved inside the Doges’ Palace, followed by Mars in 1960. The sculptures were then substituted by bronze replicas, which we can still see today in the courtyard.

The statues are carved out of white Carrara marble, probably the most precious variety of all times. As centuries went by, mainly because of the weather, these masterpieces were covered with a black patina. As a consequence, their conservation was really compromised.

Thanks to the funds of the association Venetian Heritage it has been possible to start an accurate restoration, under the supervision of Jonathan Hoyte: to clean the sculptures he has used a particular laser technique.

Eventually, after three years of work, the black patina has been removed.

On October 25th, 2019 the statues were finally exposed, perfectly restored, in the Sala dello Scrutinio of the Doges’ Palace. 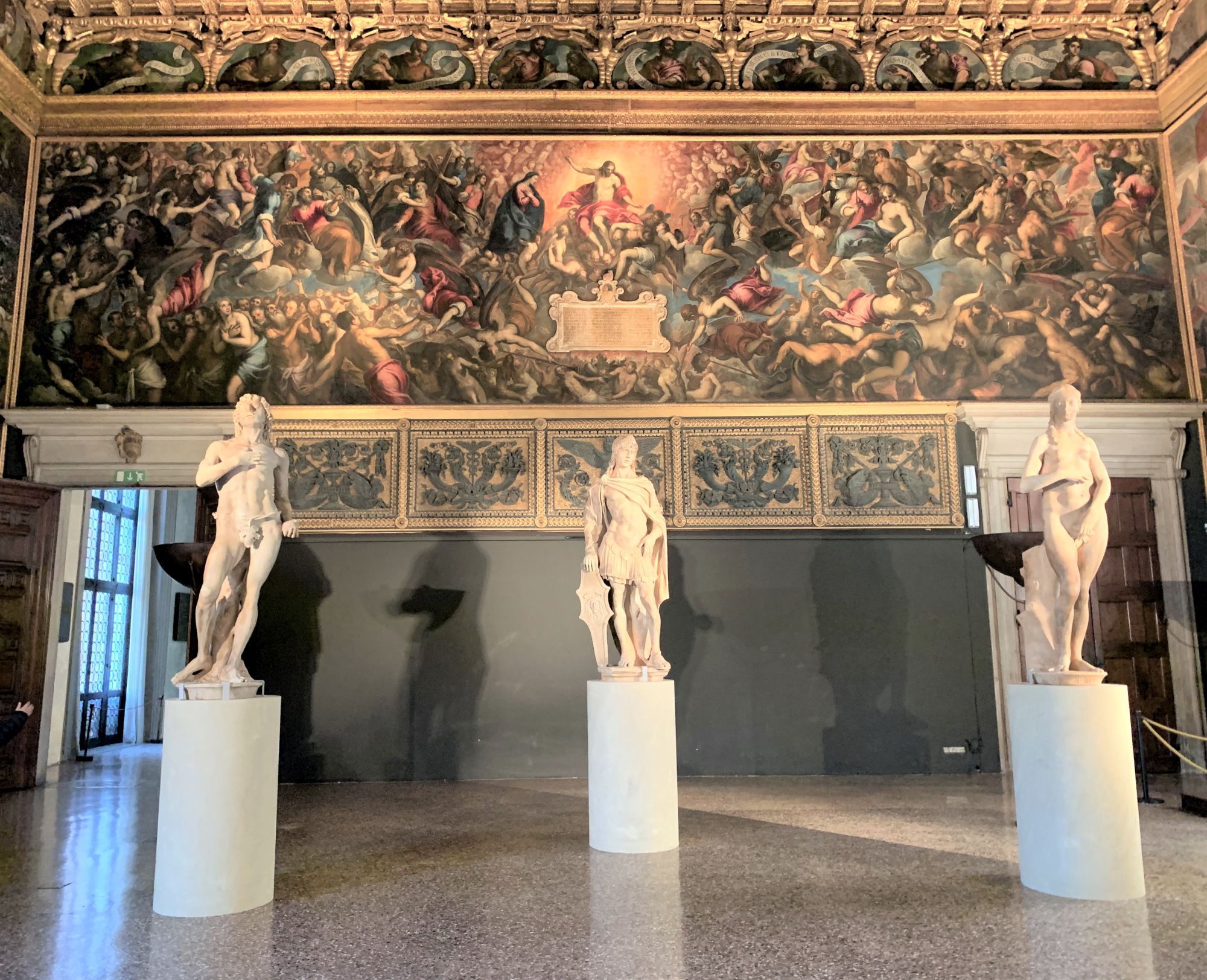 The three sculptures in the Sala dello Scrutinio

Mars’s posture, leaning on his shield, reminds of Donatello’s David, with his hand leaning on his waist. It is interesting to observe the detailed, soft, almost palpable decoration on Mars’s short kilt. 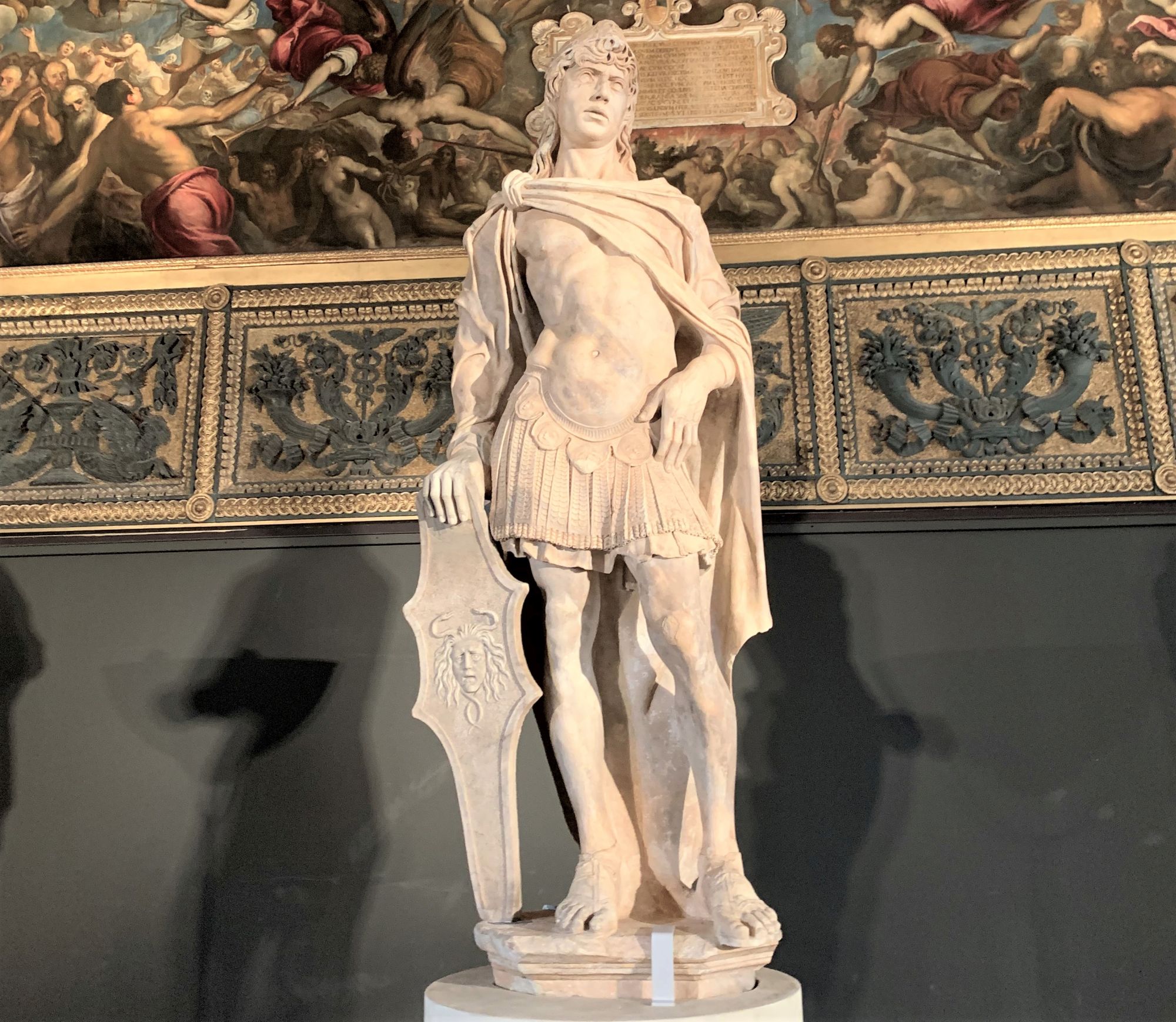 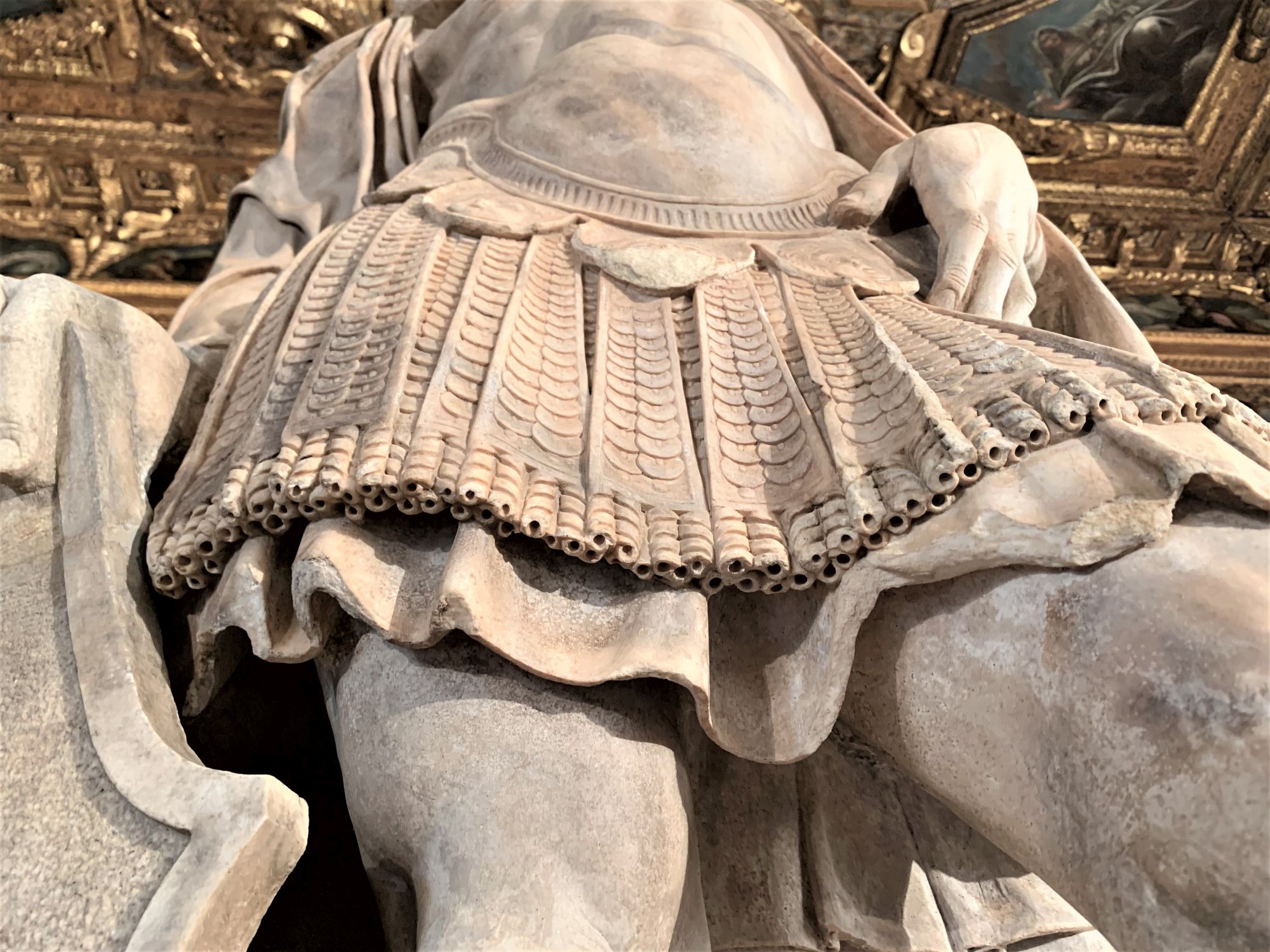 Mars, detail of the skirt

It is worth admiring Eve starting from the back, observing her long hair flowing down as to reach her anatomically perfect buttocks. The sculpture stands on a base where the name of the sculptor is carved. Her breasts are quite small, her left hand holds the leave to cover her intimate places, her face is quite detailed, with a fairly modern nose. 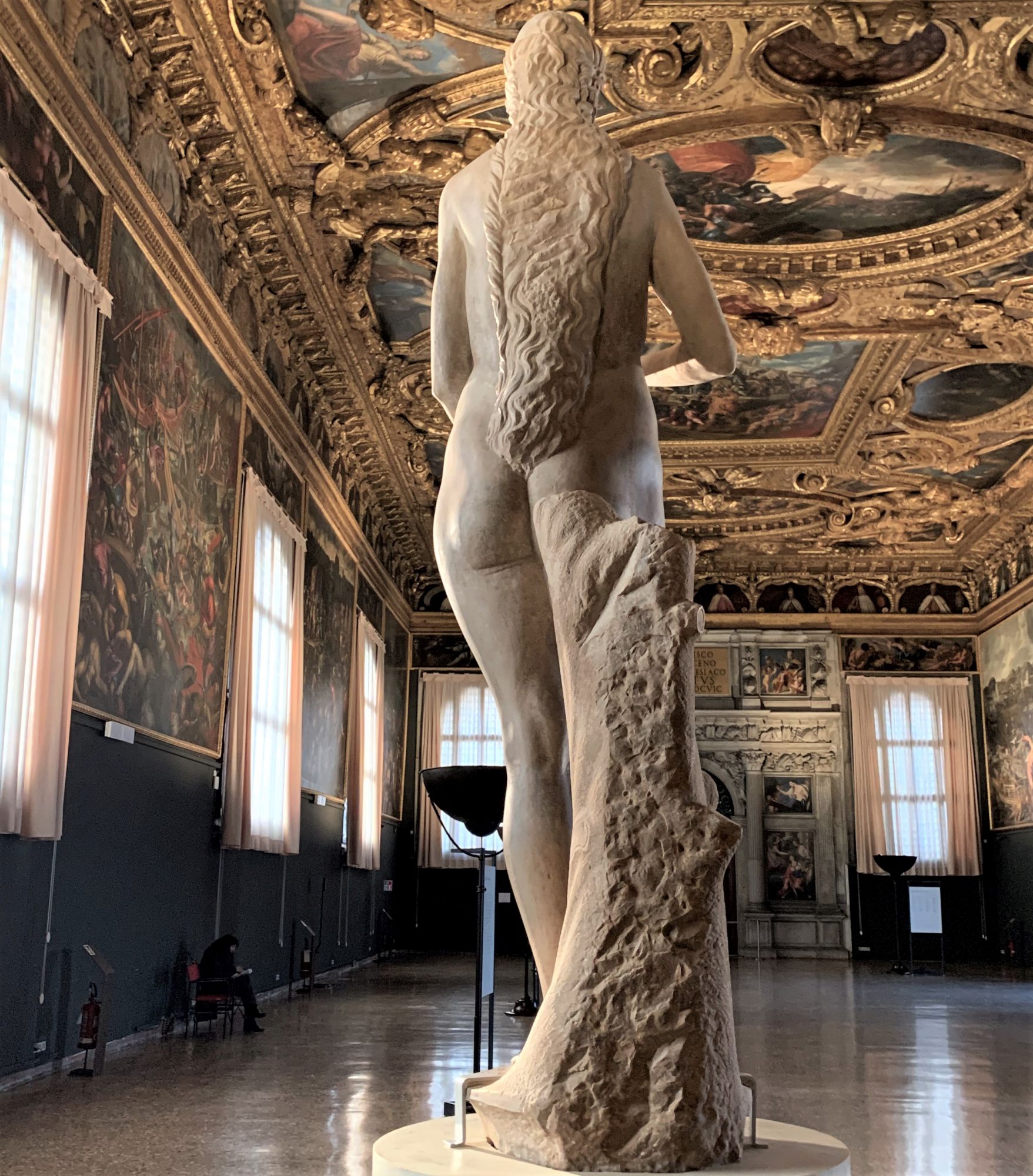 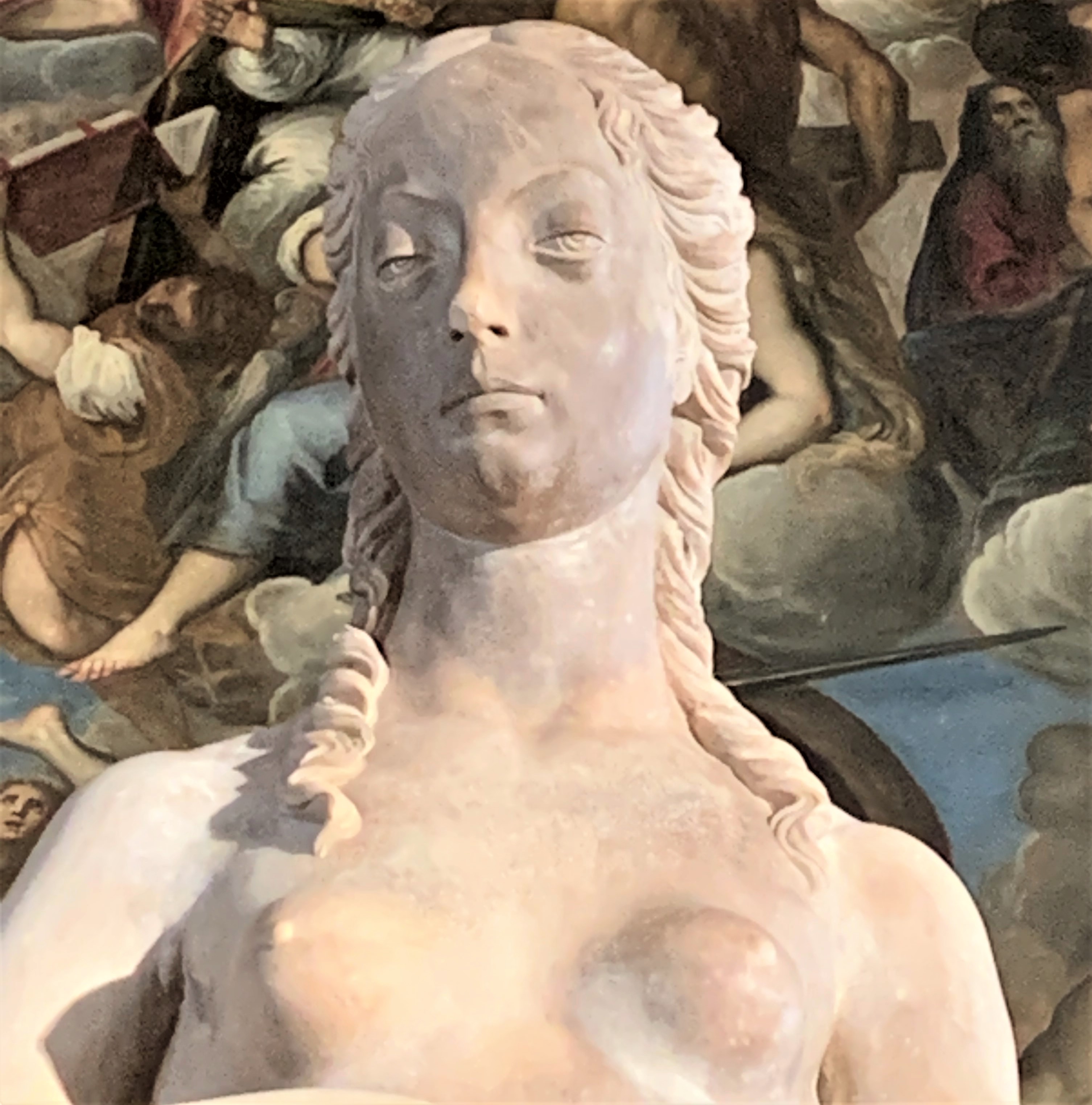 Adam looks upwards, his head is full of marble curls, the details of his face are just perfect. Looking at his right leg from the side, we can admire the perfect representation of the muscles, as if they were anticipating the great anatomical power of Michelangelo’s art. 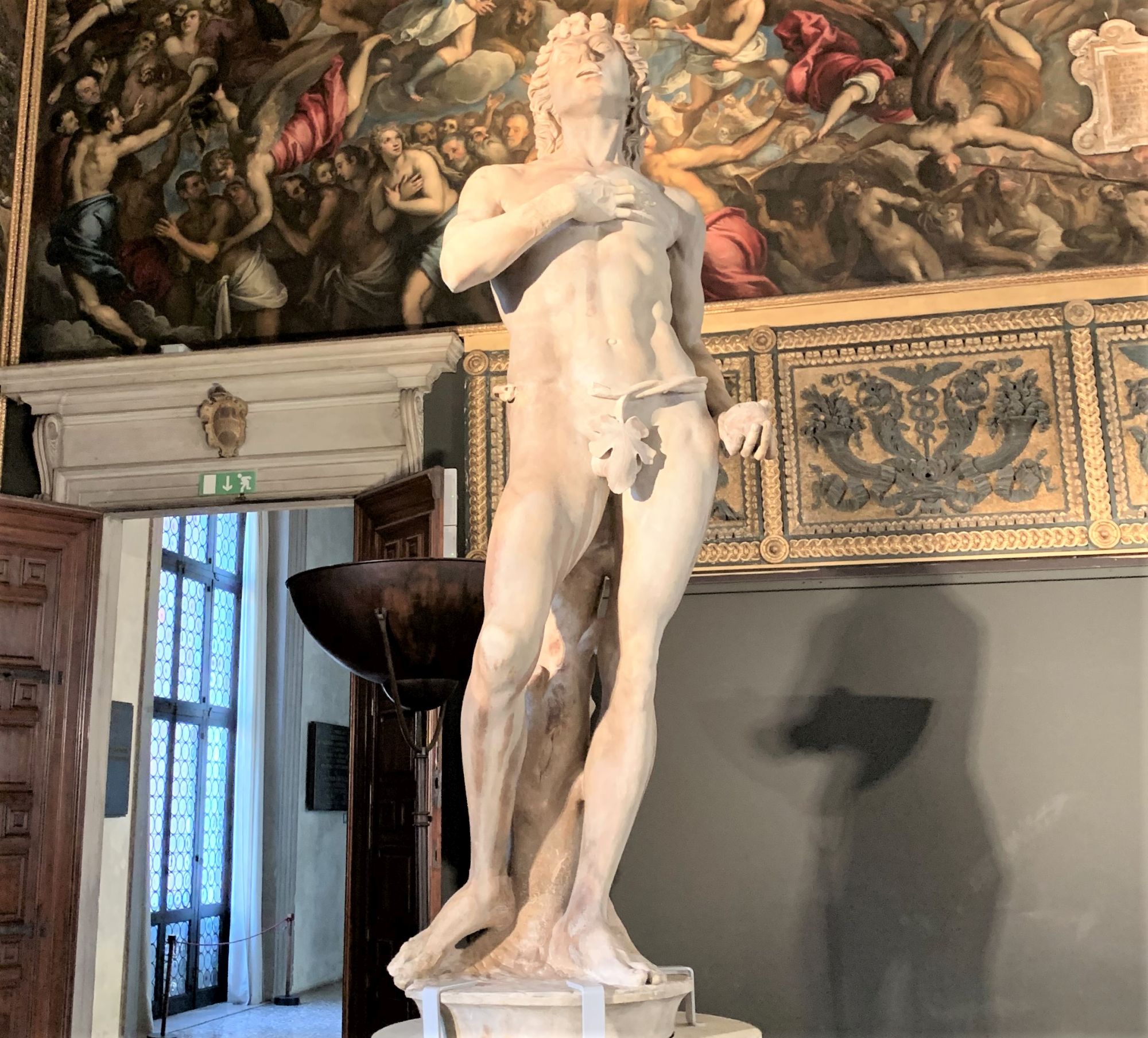 Still there are so many more details to appreciate in these restored marble “jewels”. So we are looking forward to admire them with you during a private guided tour of Venice.

The secret itineraries of the doge's palace

The lions mouths in Venice