Venice between sacred and profane: the feast of Madonna della Salute

The feast of the Venetian families...

Every year, on November 21st, we celebrate in Venice the Feast of the Holy Mary of Good Health.
For this occasion, a temporary floating pontoon bridge is built across the Grand Canal. Crossing it, worshippers can quickly reach the church: adults bring along candles of different sorts and children enjoy playing among the stands that sell toys and sweets. At home, we prepare a typical dish, the castradina.

It is worth to give some historical and artistic hints about the important and famous church of Madonna della Salute.
In 1630 Venice and the North of Italy were struck by a terrible epidemic of bubonic plague, also known as the black plague, the same that the Italian writer Alessandro Manzoni mentioned in his best known novel, "The Betrothed". Thousands and thousands people died in Venice. Nicolò Contarini, the Doge of the period, after a three day procession together with those that had been spared by the epidemic, solemnly vowed to build a church to the Holy Mary if the plague ceased. When on November 21, 1631 the end of the terrible disease was decreed, the project of a new, grand temple was assigned to architect Baldassarre Longhena.

In order to build this imposing structure it was necessary to stiffen the soil by inserting into the ground over 110,000 wooden piles, as to support its incredible weight. It was consecrated in 1687.
This painting by the 18th century Venetian landscapist Francesco Guardi represents the visit that the Doge used to pay every year to the church: it is possible to notice the temporary pontoon bridge, the crowds, the numerous gondolas of the faithful approaching the church. 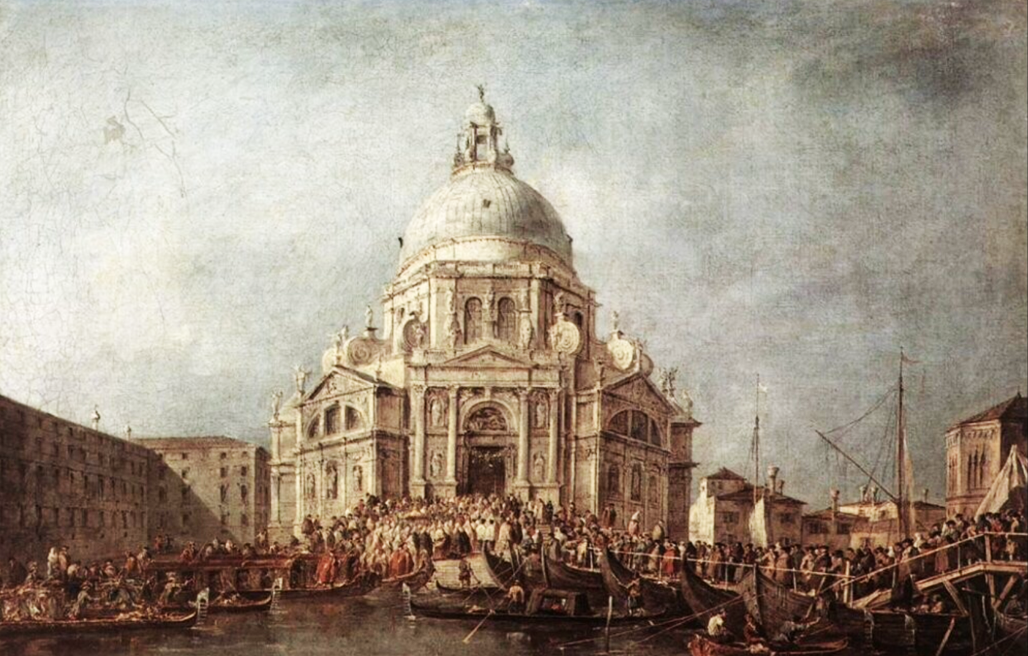 The Madonna della Salute church is one of the most important landmarks in Venice: it is visible both from the Accademia bridge (from where every day tourists take pictures of it) and at the beginning of the Grand Canal, from Saint Mark's area. It is located in the Dorsoduro district, right before Punta della Dogana (the ancient custom offices), where the Grand Canal and the Giudecca Canal merge in Saint Mark' Basin. 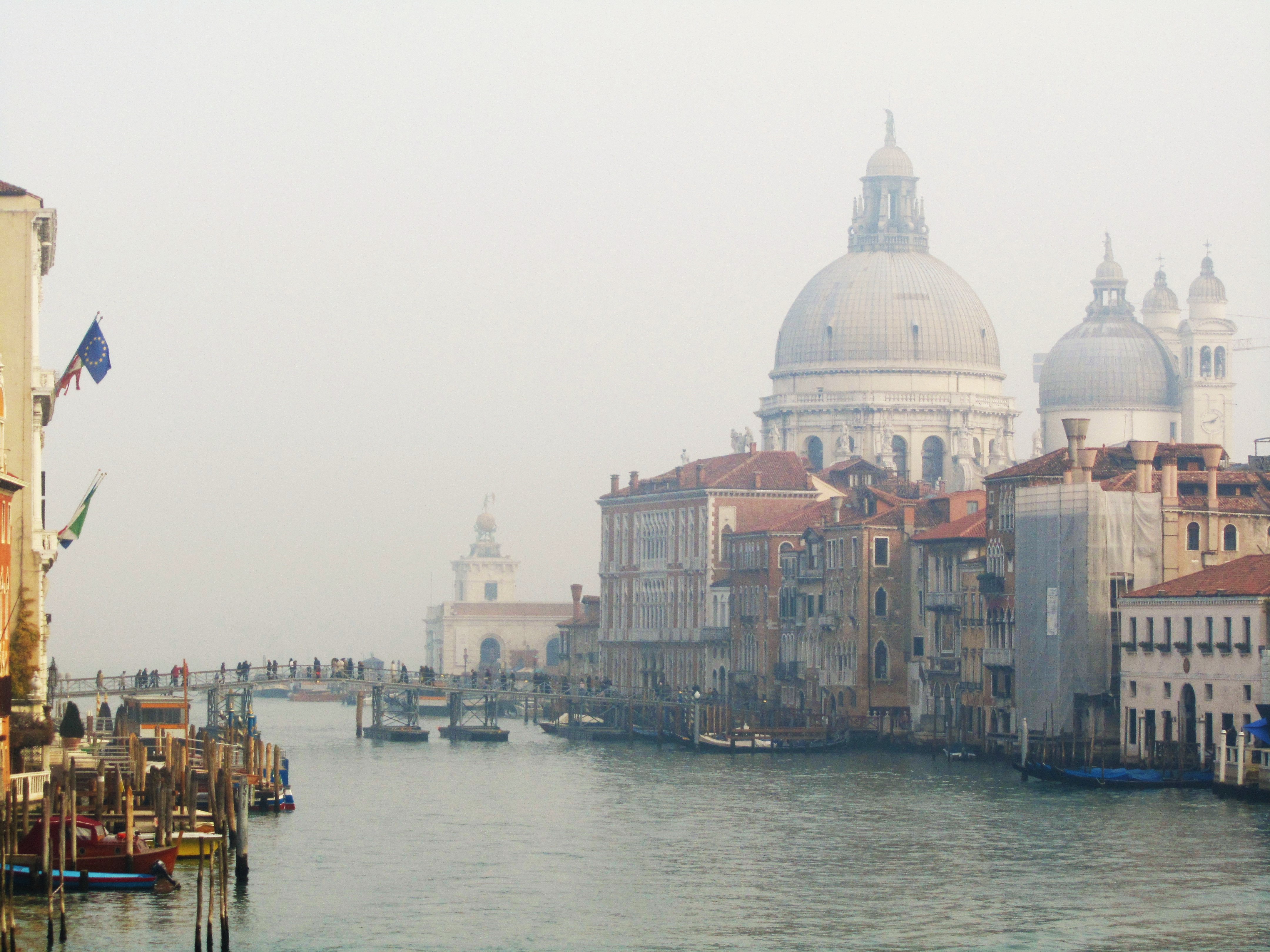 Its structure is definitely imposing. In the outside and in the inside it is decorated with over 150 sculptures representing prophets, apostles, the four evangelists, sibyls, doctors of the church, female characters of the Old Testament. Quite relevant are the 15 corbels in Istria stone, which display a spiral structure with concentric circles: they create the optical illusion of an upwards thrust, towards the gigantic dome with the Holy Mary on top, dressed as the admiral of the Republic; in this sculpture the thrust finally reaches its highest expression. 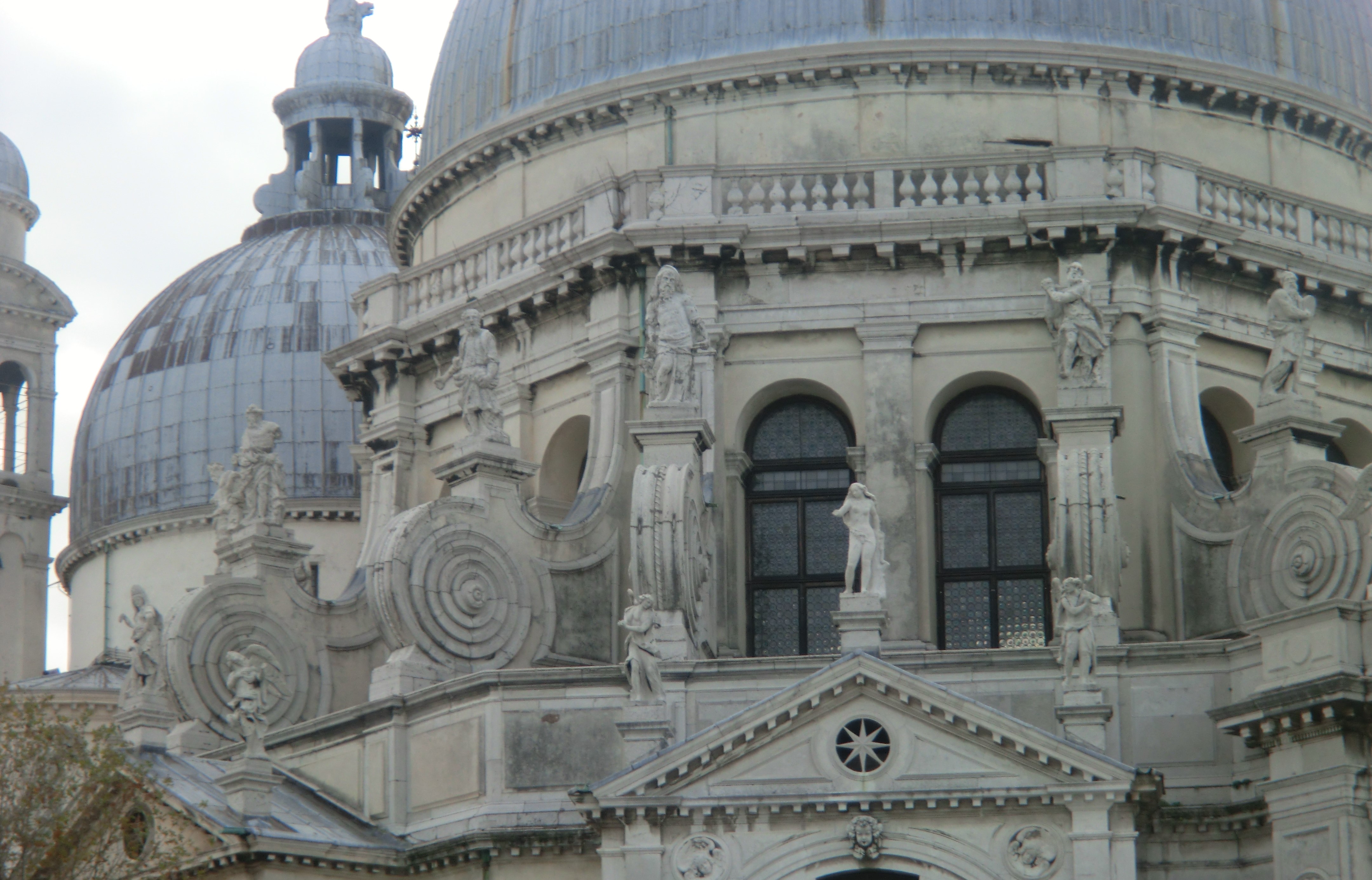 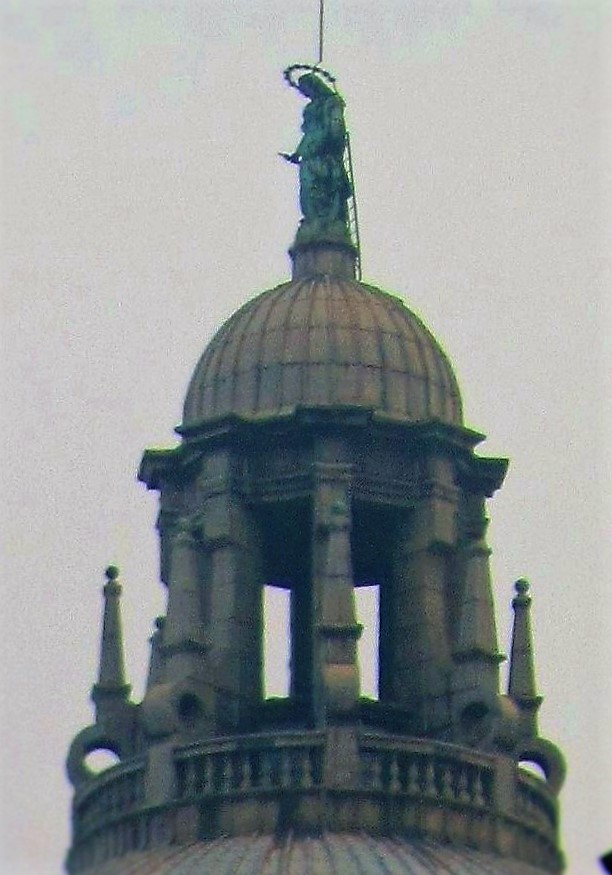 The interior displays a wide circular plan, quite unusual in Venice (there are only two other circular churches in fact, Mary Magdalene's and "Little" St. Simon's). It reminds of the wide rooms of the Roman basilicas and of the thermal structures of the Late Gothic period. One striking element is the floor: it consists of 32 concentric circles of polychrome marble mosaics with a central circle where we can read the Latin inscription: "Unde origo, inde salus" (which means: "From where Venice got its origins, that's also where its health came from"). This underlines the strong link between Venice and the Holy Virgin: according to the legend, in fact, the city was founded on the Annunciation Day, March 25, 421 A. D. And it was now the Virgin herself that had saved the city from the epidemic: Venice was born from Mary, and from Mary health had come. 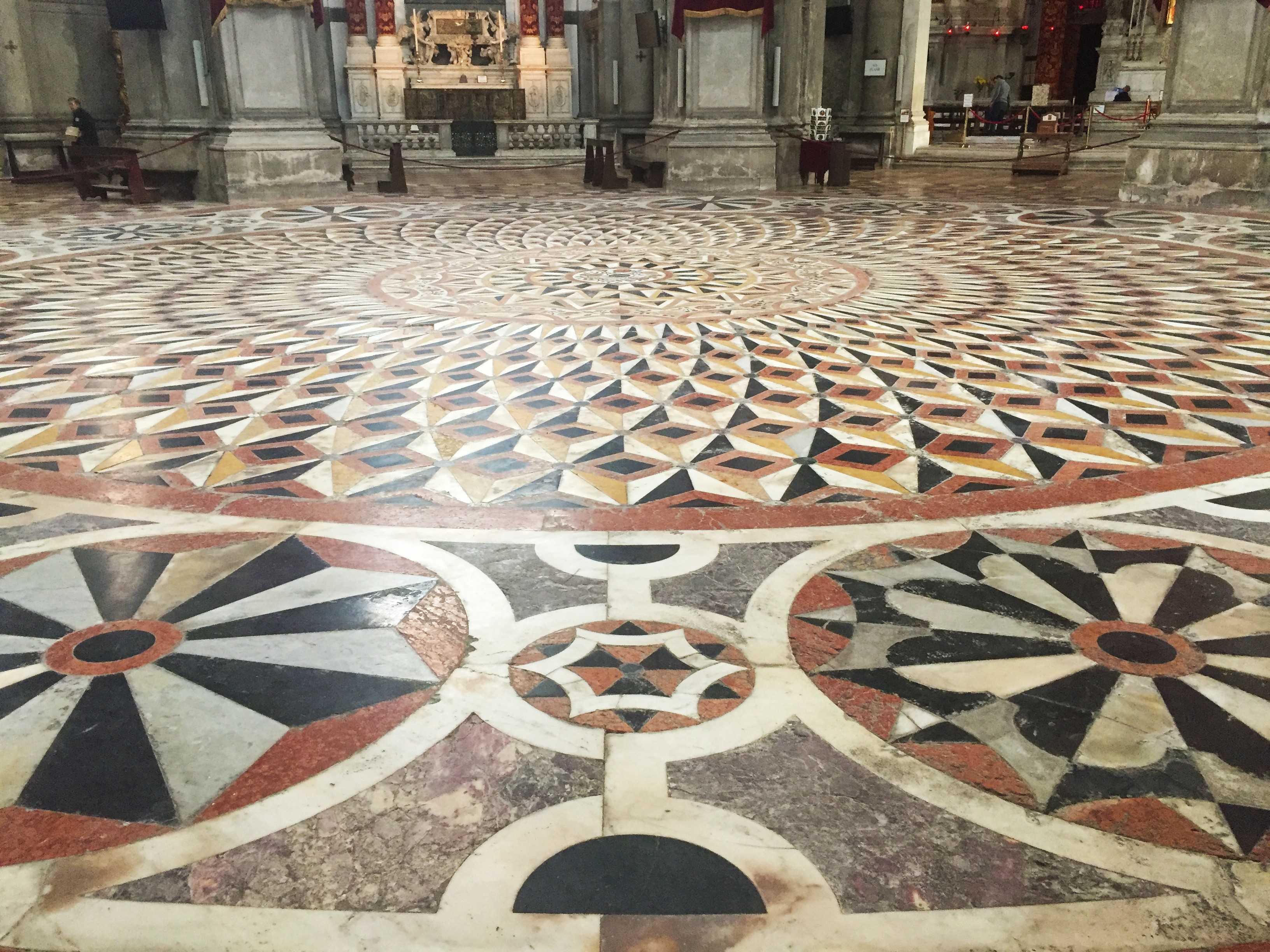 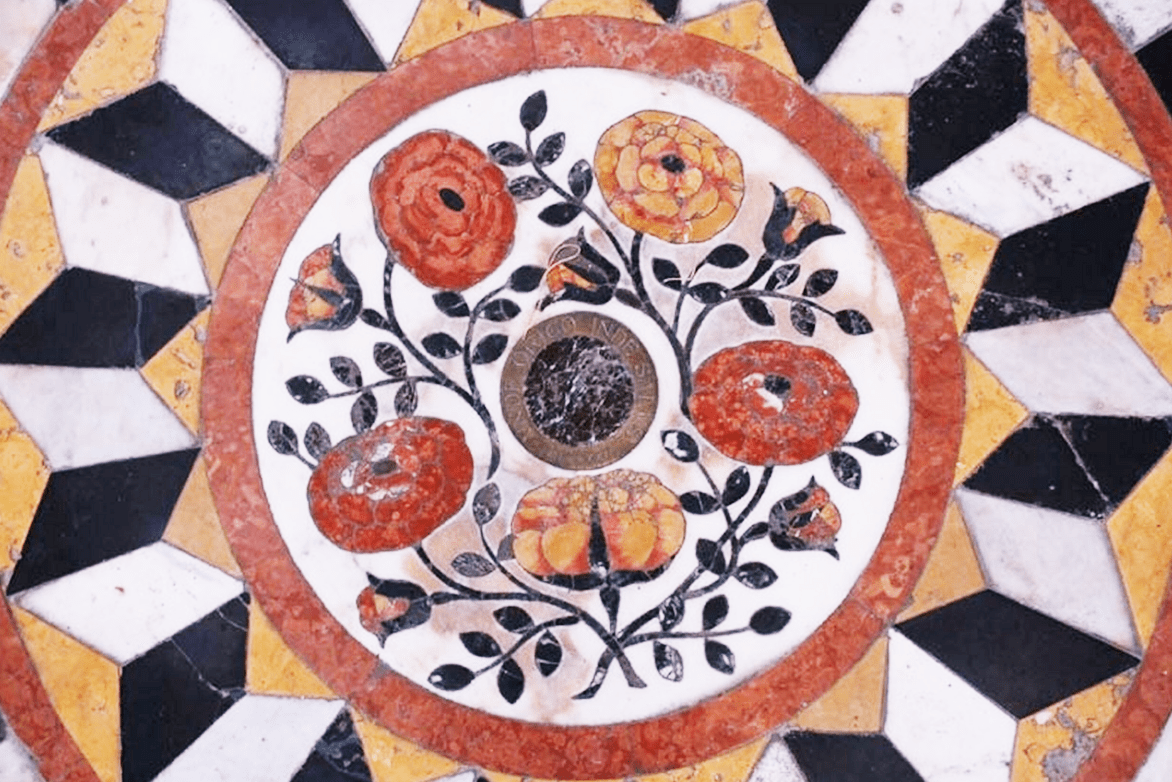 The main altar is a real masterpiece by the Flemish sculptor Juste Le Court. It represents Venice delivered from the plague. The Holy Mary, with three little angels at her feet, stands in the middle holding Baby Jesus in her arms; she is supported by a group of clouds. An angel with a torch pushes plague away. Plague is represented as a disturbing, almost macabre ugly old lady. Venice kneels down at Mary's feet, in a pleading attitude. 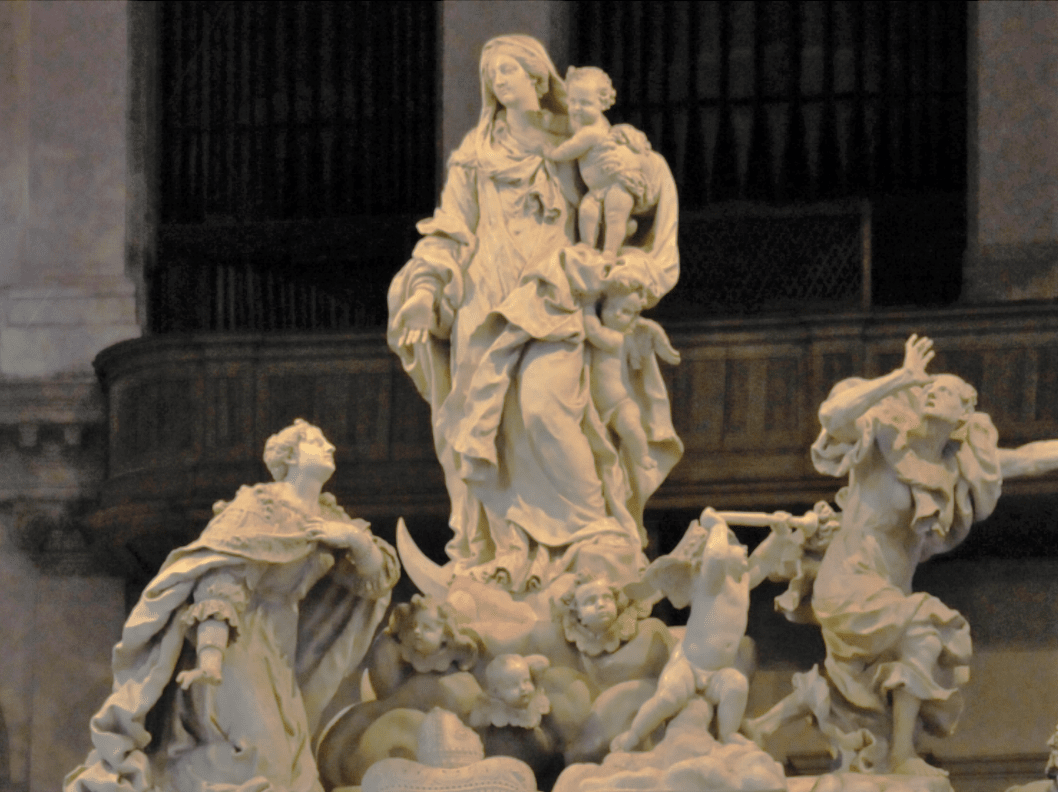 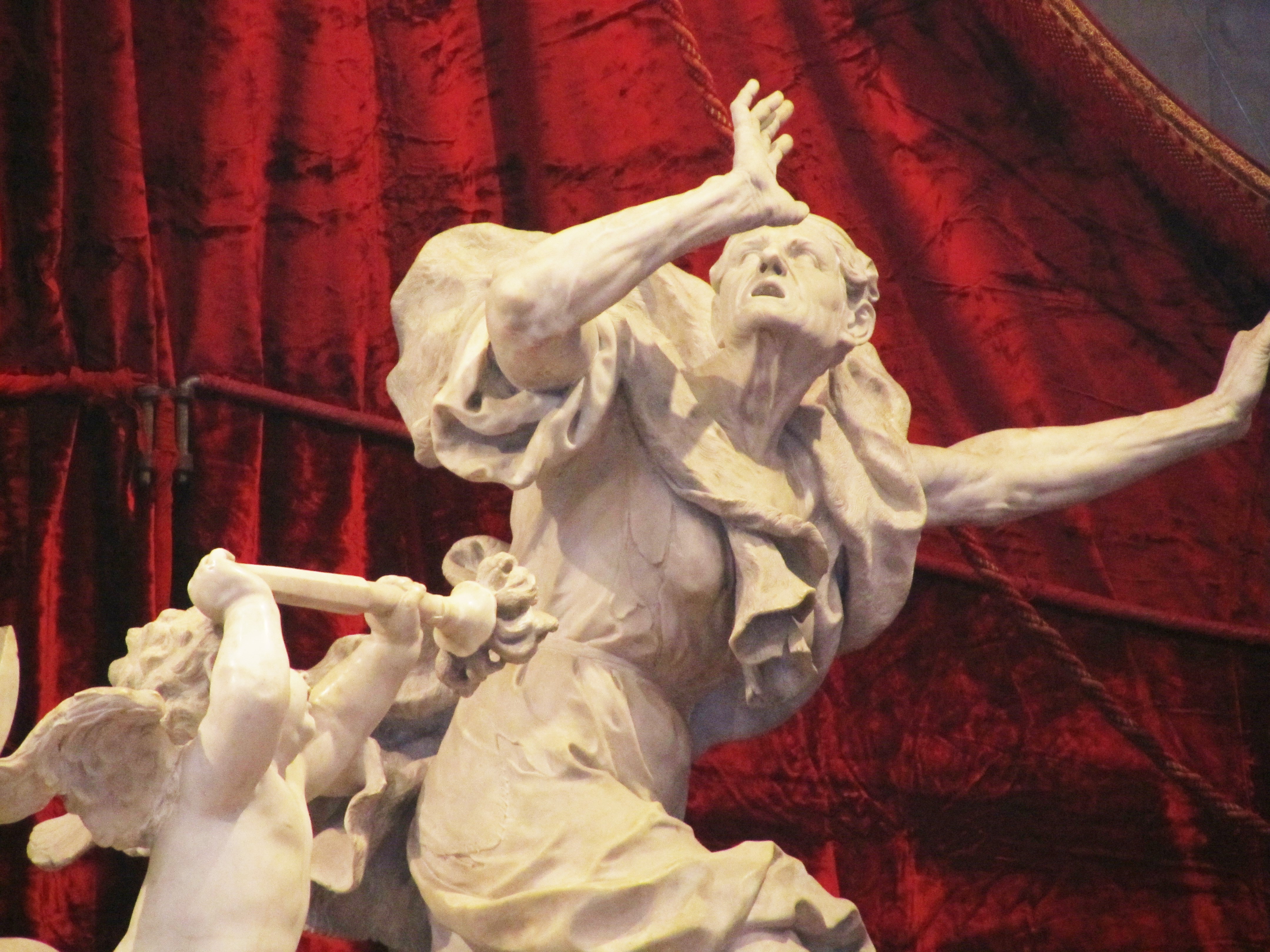 Right in the center of this sculpted complex we can admire a precious byzantine icon, the Holy Mary of Health, known as Mesopanditissa or Holy Mary of Mercyor also Mediatrix of Peace. This icon was brought to Venice by the admiral Francesco Morosini as a trophy after signing a peace treatise with the Turks at the end of the war of Candia (today's Crete). It was placed on this altar in 1670. The icon is an Odighitria; the name comes from the Greek word οδηγός (odegós) which means "guide, leader", and can be interpreted as "the Holy Mary who shows the way", the way being Christ himself, whom Mary indicates with her right hand. In Candia it was known as Mesopanditissa, possibly because in their liturgical year this Madonna was celebrated in between (mezo) Epiphany and the feast of the Holy Mary (Ipapantissa) of February 2. 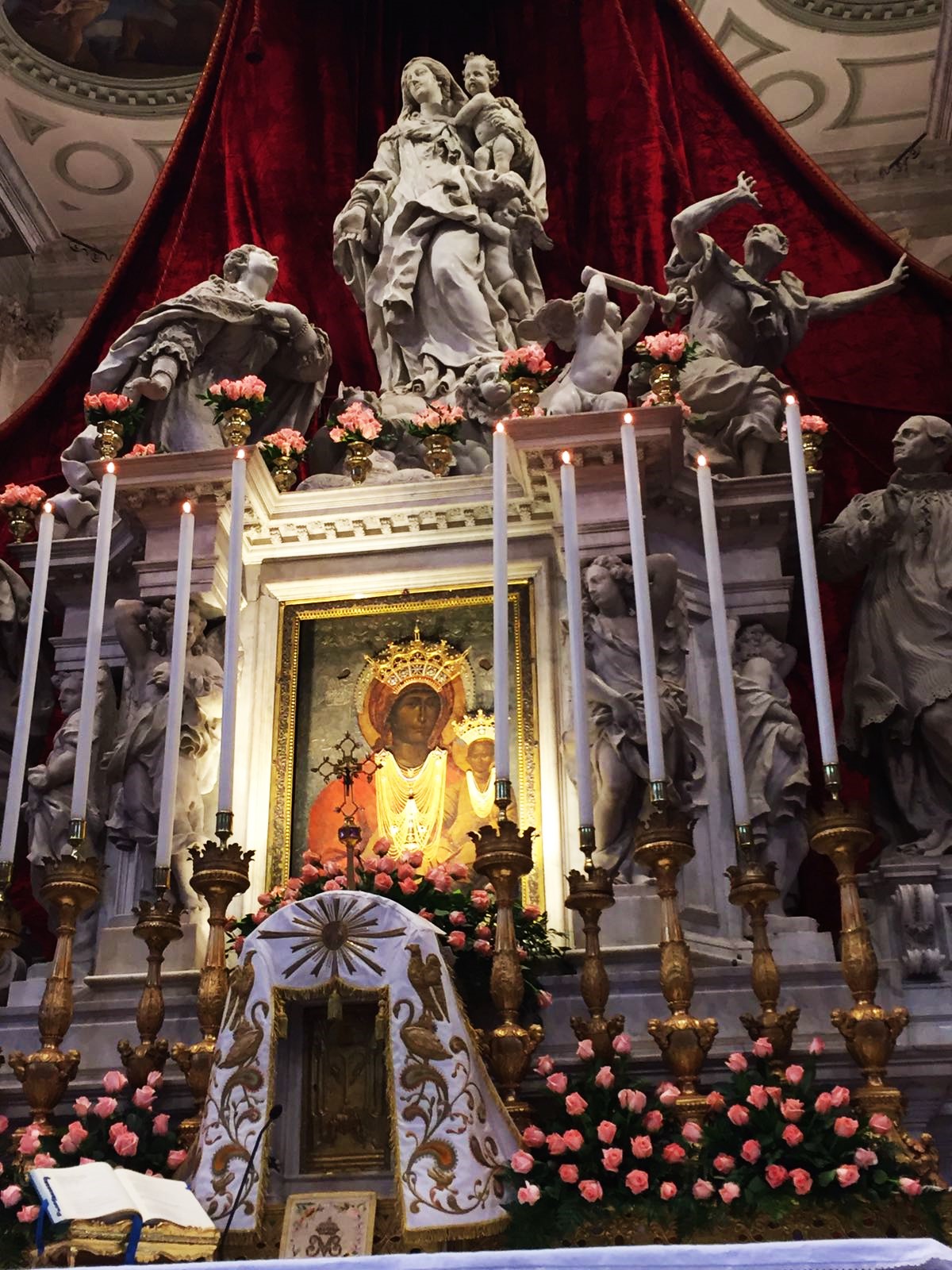 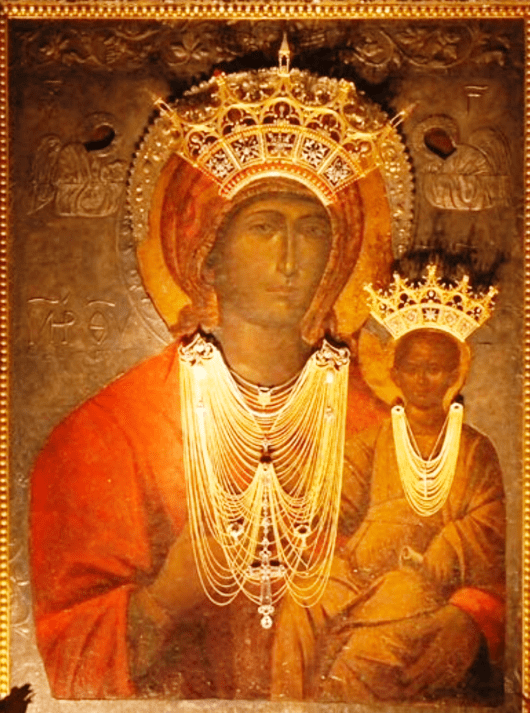 Unlike the Feast of the Redeemer, which is magnificently celebrated every year on the third weekend of July, the Salute is a more intimate feast, a little more sober, and definitely more Venetian. A temporary floating pontoon bridge is built across the Grand Canal for this occasion, so that the worshippers, mainly Venetian but also foreign, can quickly reach the Basilica, in front of which they can find several stands where they can purchase candles of different forms, plain or with various original decorations.
The calli  (the typical Venetian narrow alleys) are overcrowded with pilgrims and with more stands selling all sorts of sweets, toys and colorful balloons. It is a feast for the entire family: parents and children first enter the church to pray and leave their candles, and afterwards they stop around the church and in the nearby alleys: adults chat with their friends and children run and play around cheerfully. 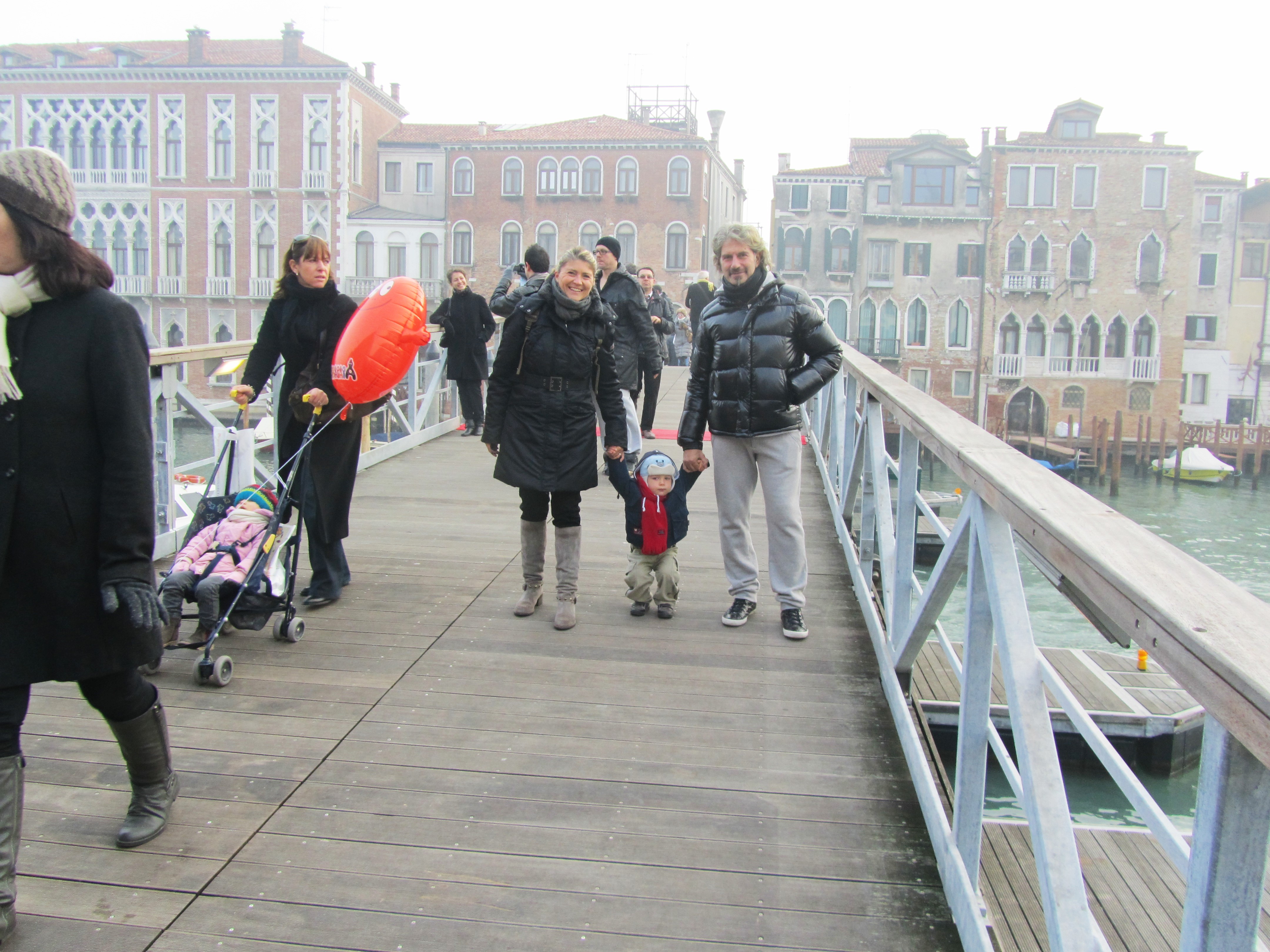 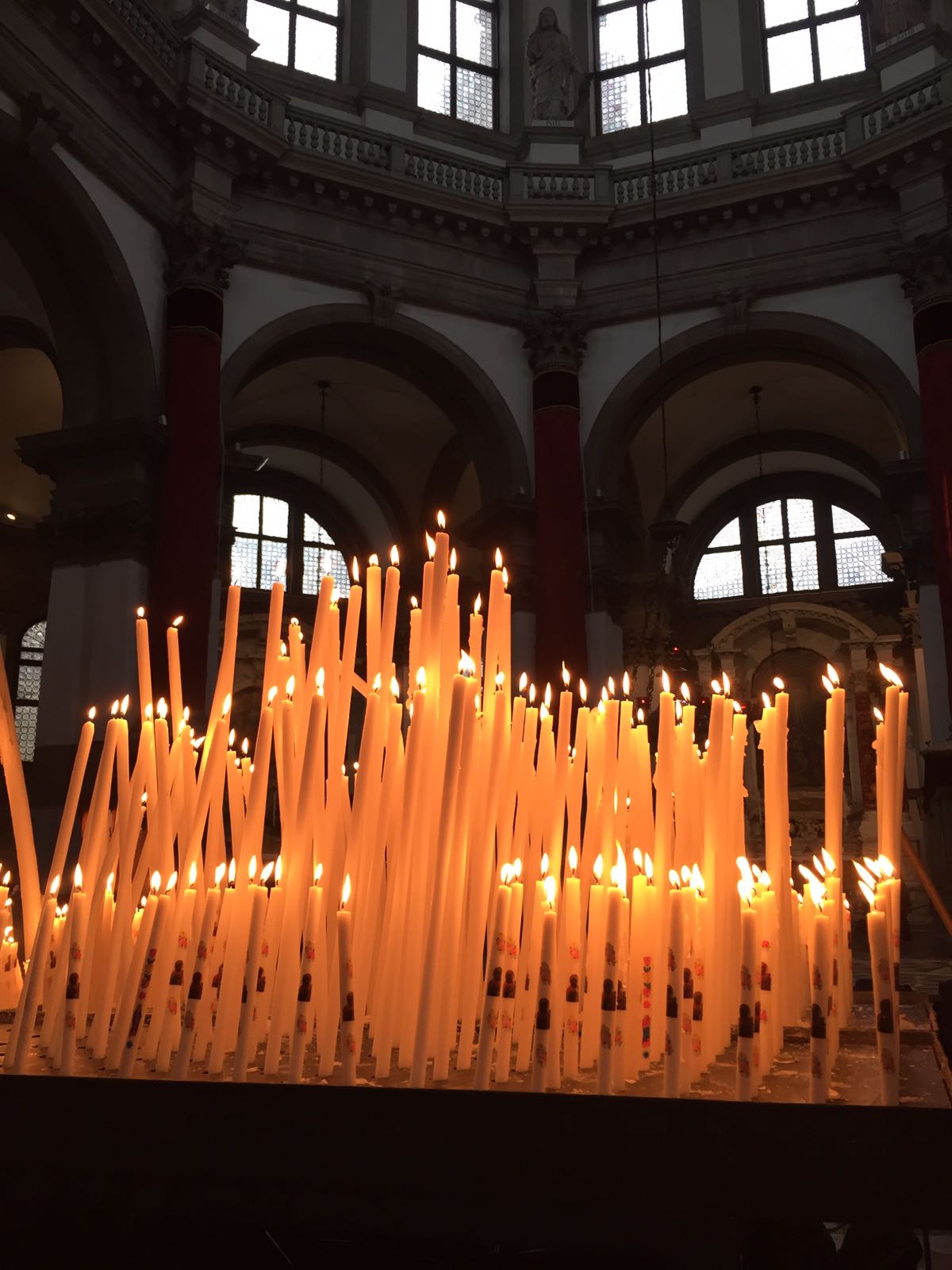 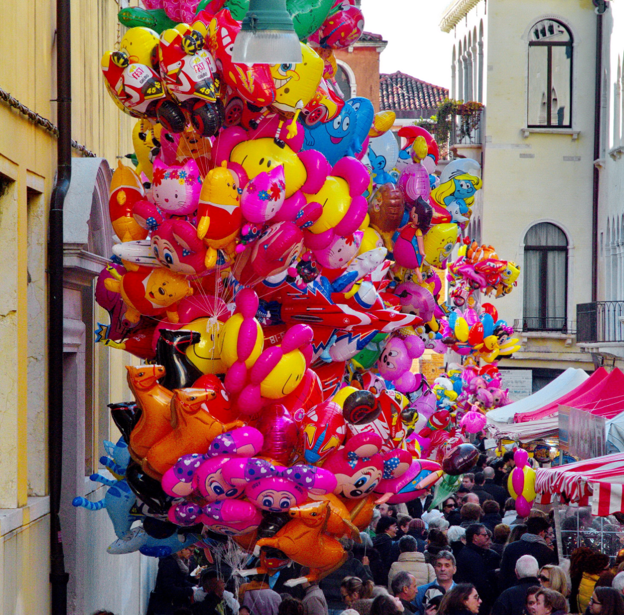 In order to avoid total overcrowding, the circulation of pedestrians is regulated with particular dispositions, such as one way streets nearby the church. Anyhow, whoever desires to pay homage to the Holy Mary must be quite patient. The overall atmosphere, despite the crowds, is full of joy and serenity. The little ones don't miss the opportunity to taste some sweets along the alleys, and even the adults cannot resist the temptation! But they cannot have too many: at home, or in the restaurants, the castradina is waiting for them! It is a typical dish which main ingredient is smoked mutton and which is prepared right for this occasion.

We definitely invite you to come to Venice during this feast and to take part in it, in order to understand a significant aspect of the tradition of our city and of the sensibility of its inhabitants.

Let us now say goodbye, as we usually like to do, with one of our favorite pictures, which shows at the same time both the grandeur and the mystery of this church and of the entire lagoon: the Basilica della Salute at sunset. 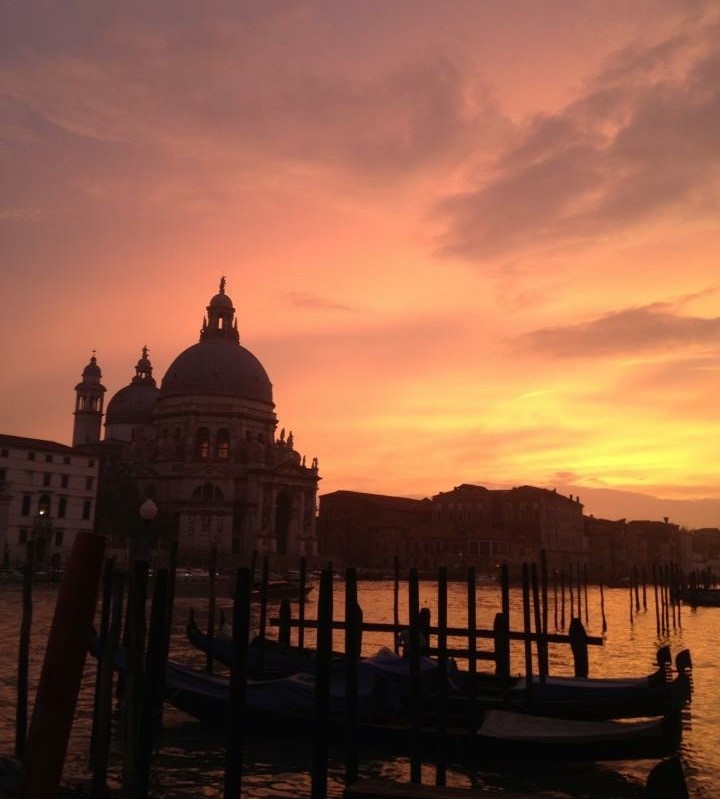