The Gondola in Venice

Discover with us the beauty of the Venetian boat During a tour in Venice, you will see the typical boat of the city: the gondola. It is a symbol of Venice itself.

Today it is mainly used by tourists, but in the past it used to be the most important means of transportation for the Venetians.
We do not know exactly the origin of this word. It could come from the verb dondolare, which means “to swing”, or from the Latin cymbula, a “small boat”, or even from cuncula, the Latin word for “shell”. 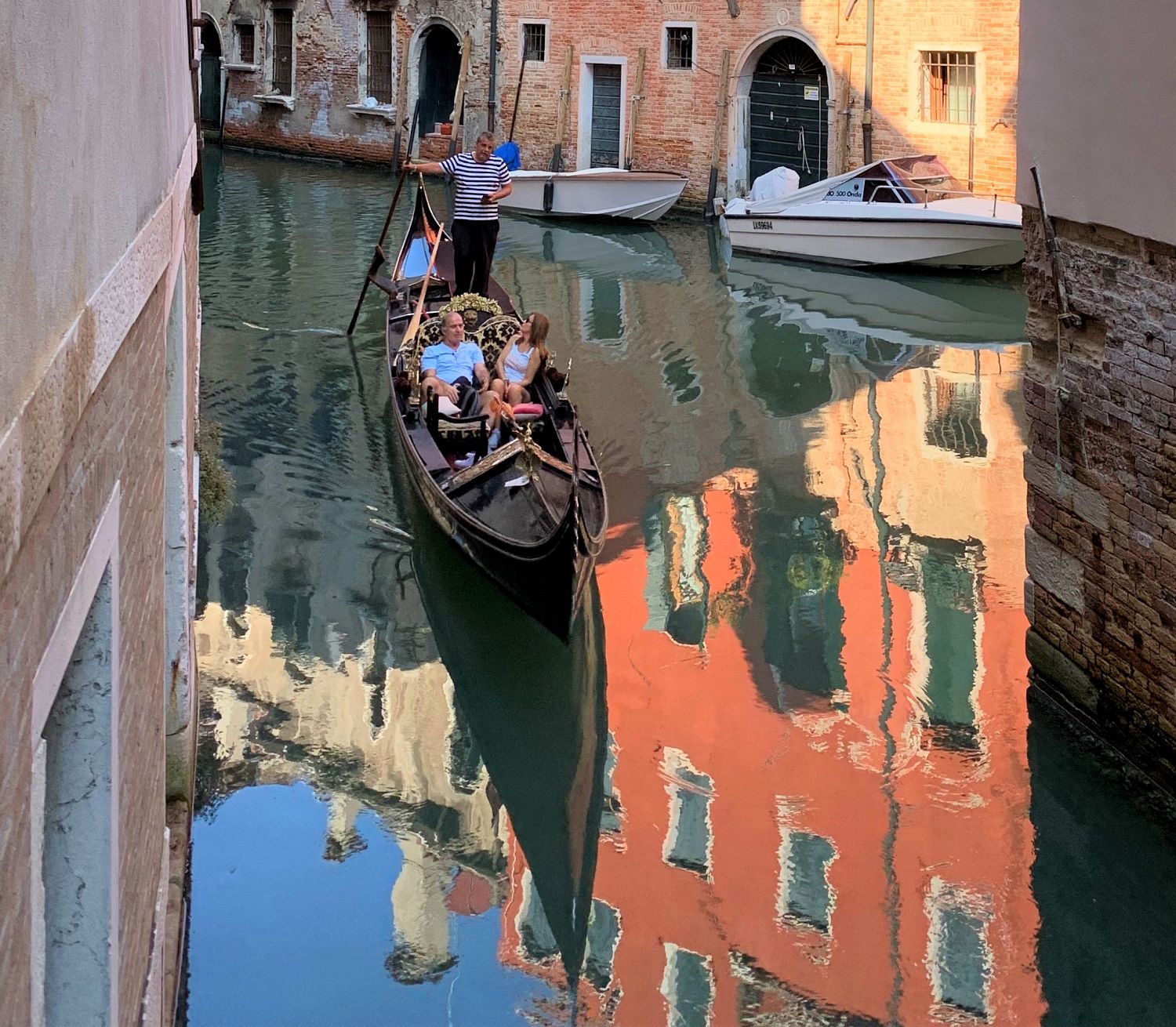 Tourists on a gondola ride

We find the word gondulam for the first time in a document of 1094, in the period when Vitale Falier was the Doge of the Venetian Republic.
The most typical boat of the Venetian Lagoon underwent several modifications over the centuries, both in its measures and in its decorations.

The black color and the “felze”
The fact that gondolas are all black might not be related to the Black Plague of 1630/1631, as a legend suggests.
It is instead quite possible that gondolas were black since the very beginning because of the black pitch that was used to make it waterproof.

The rich noble families would own a family gondola, with a private gondolier who was always at disposal.
They would show off their wealth by embellishing their boats with precious fabrics and refined gold leaf decorations.
However, all the citizens of the Republic were subjected to the control of a large number of political councils and committees. It was in 1609 that both the Senate and the Superintendents over Excessive Luxury enacted some laws that meant to limit drastically the waste of money on too expensive decorations for gondolas. 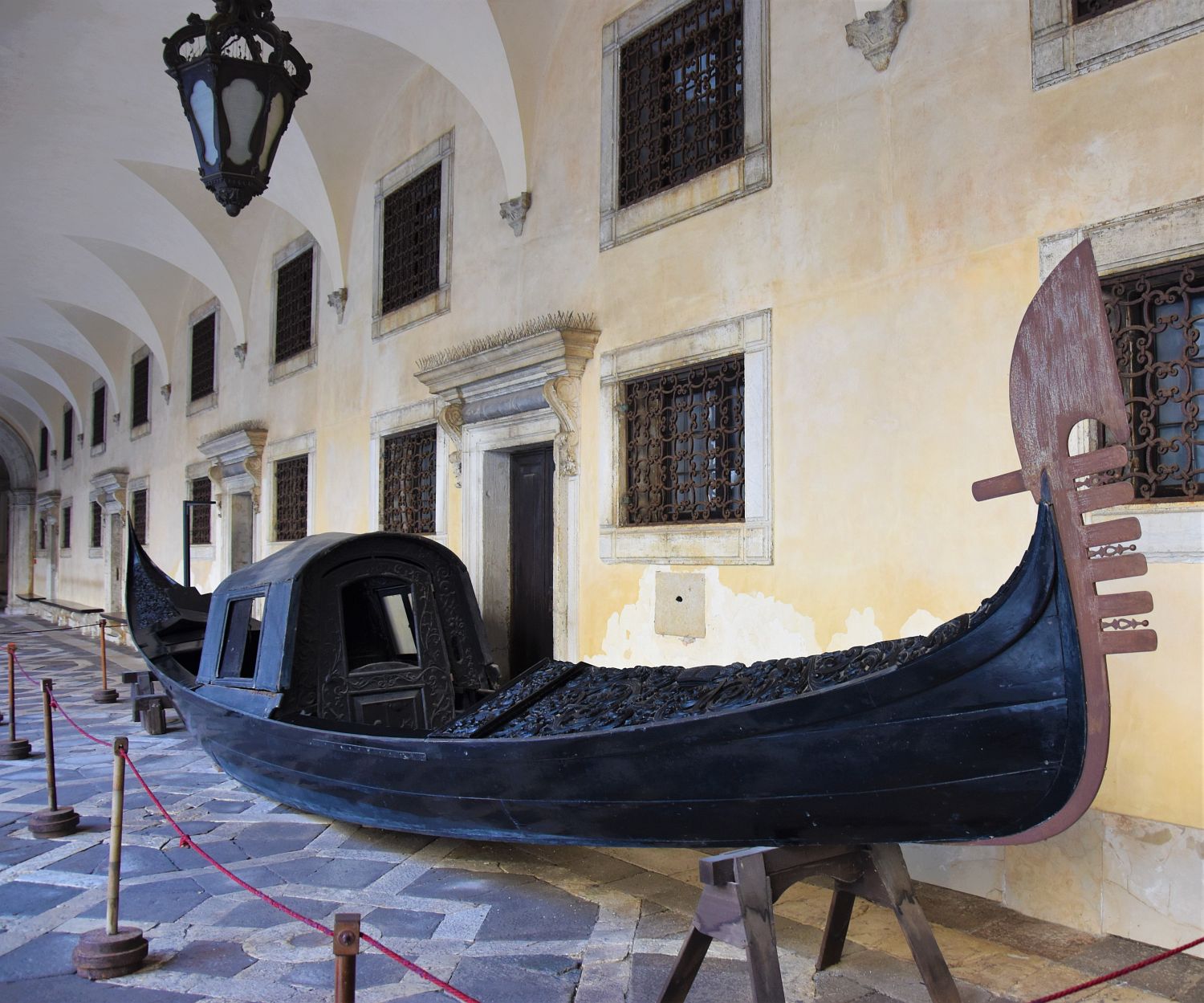 Gondola with the felze (Doge's palace)

In the past gondolas used to have a cabin, called felze, in the central part.
The main aim of the felze was to protect the passengers from the cold weather, as well as from the rain and from the heat. But it would also allow privacy and discretion for love encounters!
It is then impossible not to think of Giacomo Casanova and his numerous lovers… 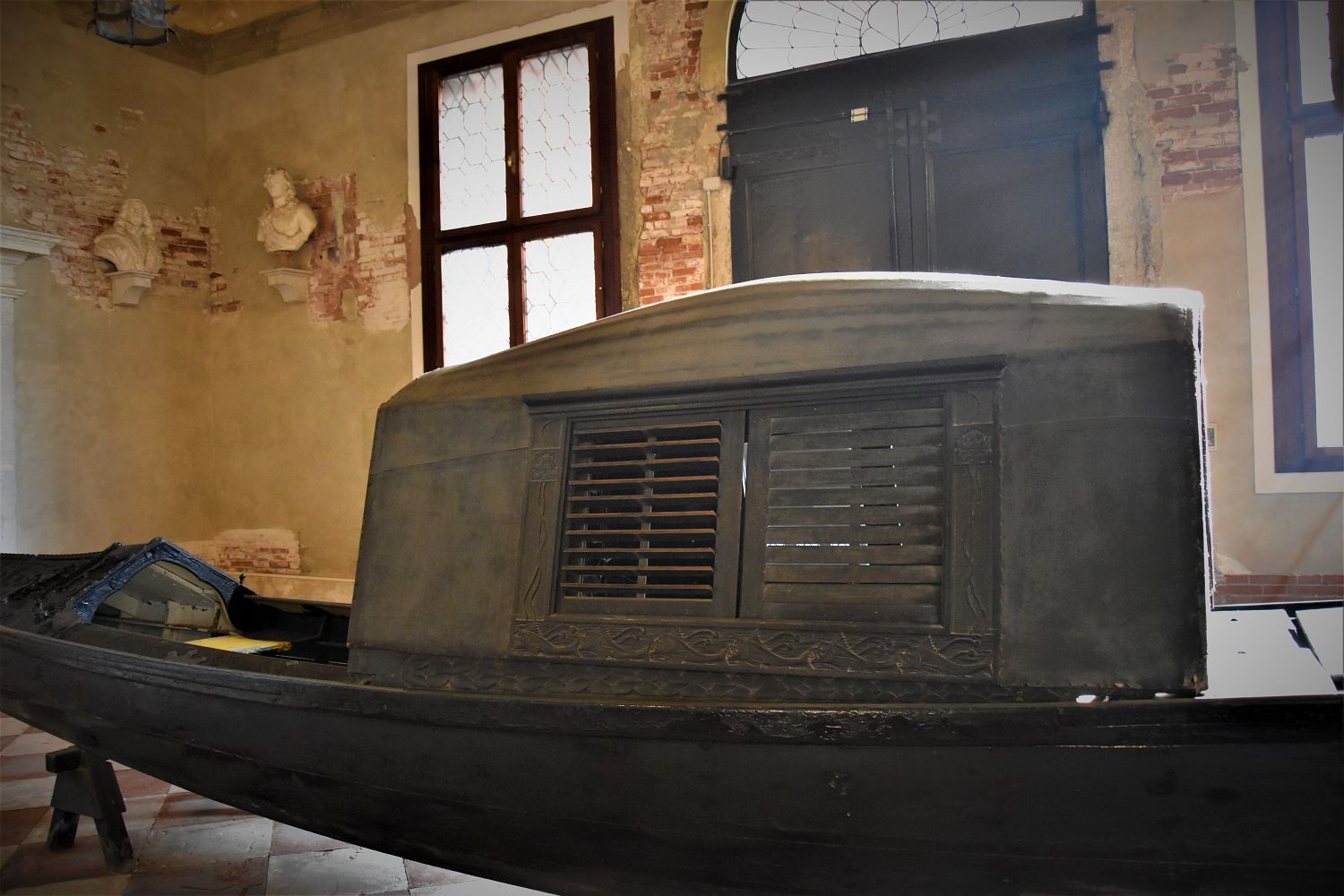 The gondola today
Modern gondolas do not have the cabin, so that tourists can look around and admire the fascinating beauty of Venice floating along the narrow canals, to see the so called “city on the water” from the water itself! Quite a different perspective…

Today gondolas have more or less the same dimensions as the gondolas of the 18th century. They are almost 11 meter long (roughly 36 feet), and consist of about 280 pieces, all of which are hand made out of 8 different kinds of wood.
They have a metal decoration on the bow, called fero (i.e. iron element) in Venetian, which symbolism is quite well known, with the different elements representing the Doge’s hat, the six districts of the city, the Giudecca island, the Rialto Bridge, St. Mark’s Basin, The Grand Canal, and the islands of Murano, Burano and Torcello. 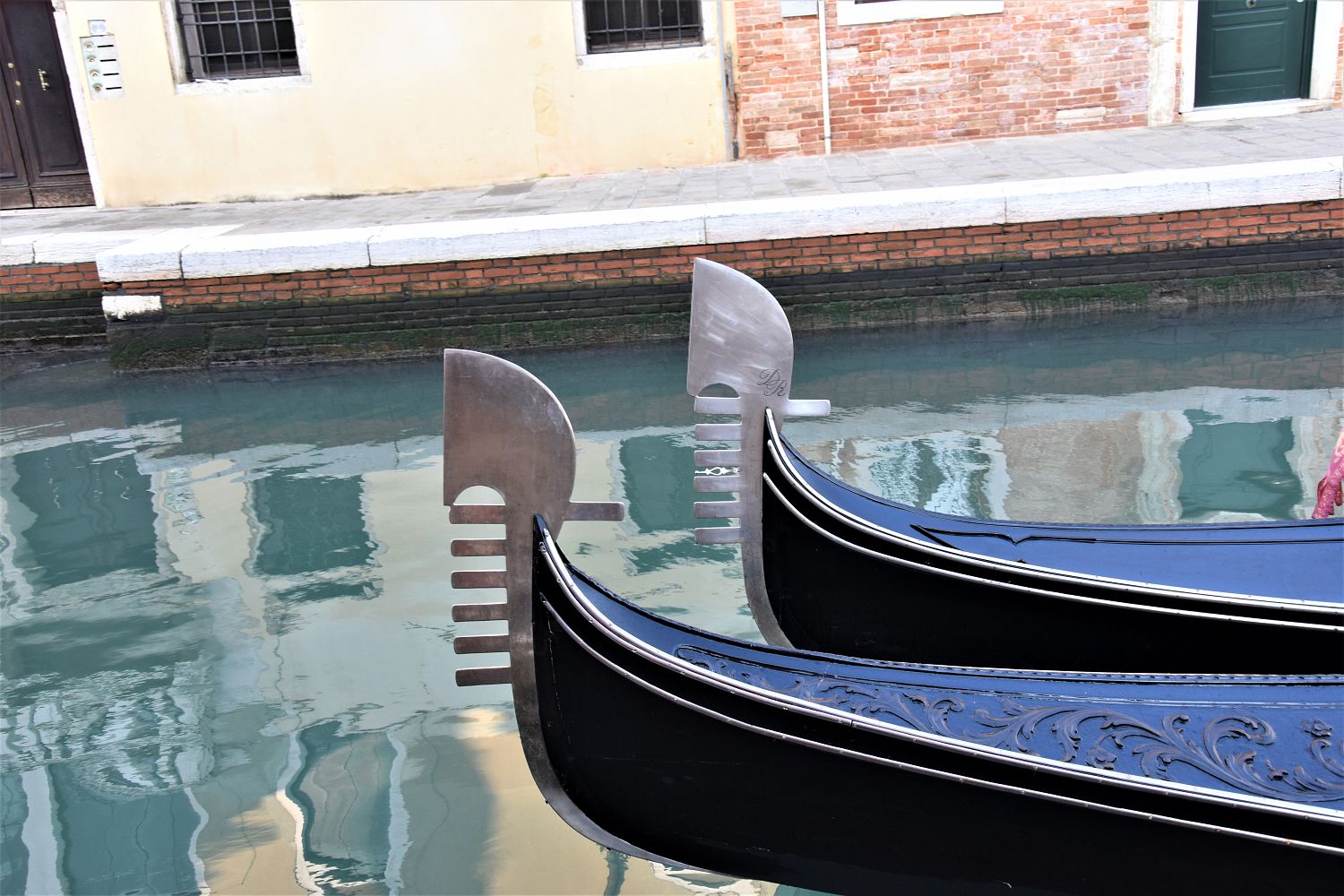 The decoration on the bow

The gondola is frequently used also in special occasions: for regattas (as, for example, the Historical Regatta, the most important one, which takes place every year on the first Sunday of September); for weddings, when gondolas are decorated with white flowers and the gondoliers wear their ceremonial uniform; for the visits of important people (as during the recent visits of the Roman Pope)…

The gondola in paintings
There are quite a few paintings that represent the numerous gondolas which floated in the past centuries along the Venetian canals.
Among them, two are quite dear to us.
One is “The Miracle of the Holy Cross at the Rialto Bridge” by Carpaccio, where you can notice the traffic of gondolas and all sorts of boats along the Grand Canal: noble ladies and gentlemen, elegantly dressed, sit on the gondolas inside the felze, and they are both the main characters and the viewers of the miracle that has just happened. 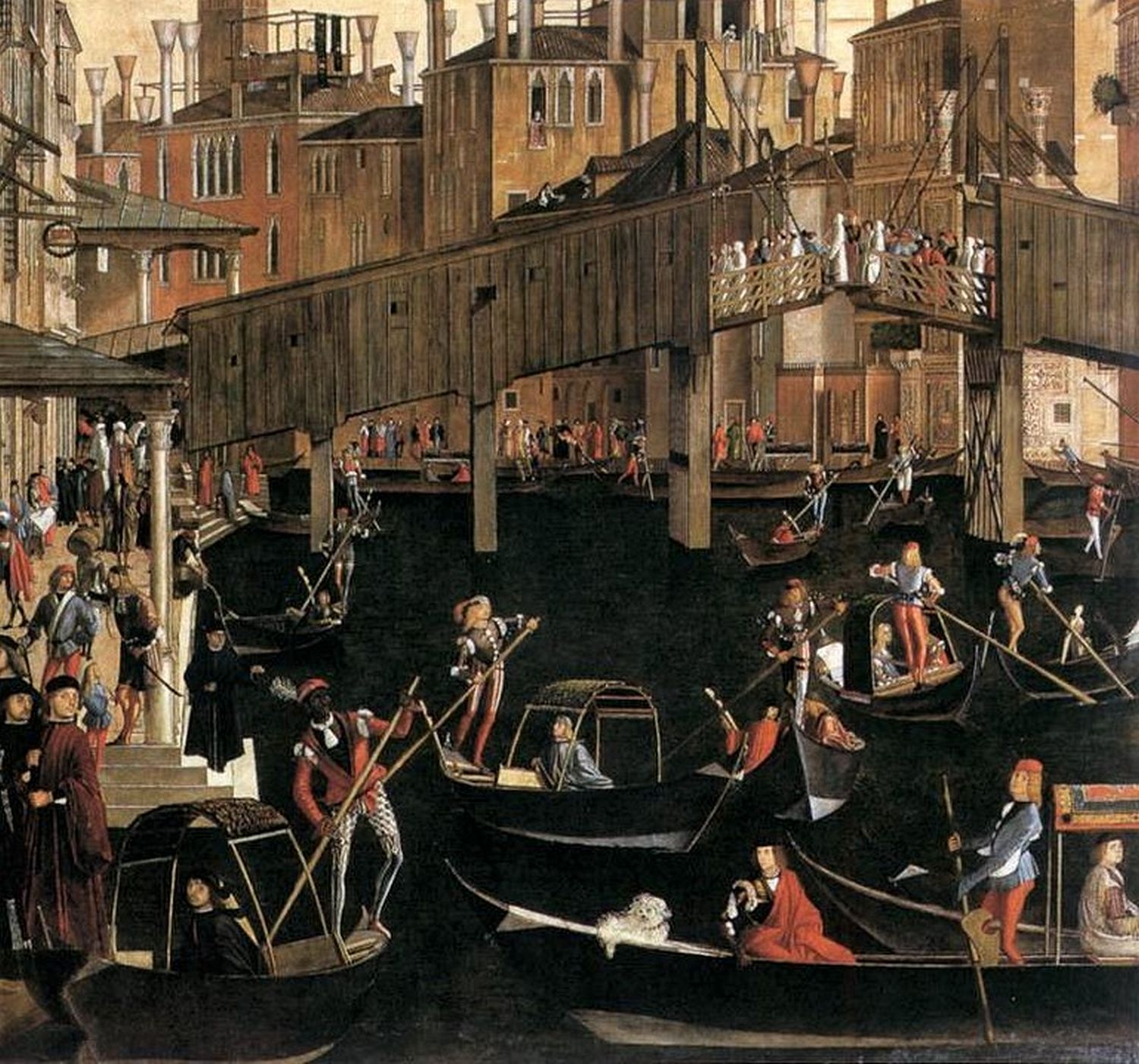 The Miracle of the Holy Cross at the Rialto Bridge, by Carpaccio, detail (Accademia Galleries)

The other one is a painting by the 18th century landscapist Canaletto, who, in his “View of the Grand Canal from Ca’ Balbi”, represents several gondolas, some of which are used also for transportation of goods, with gondoliers of clearly humble origins. 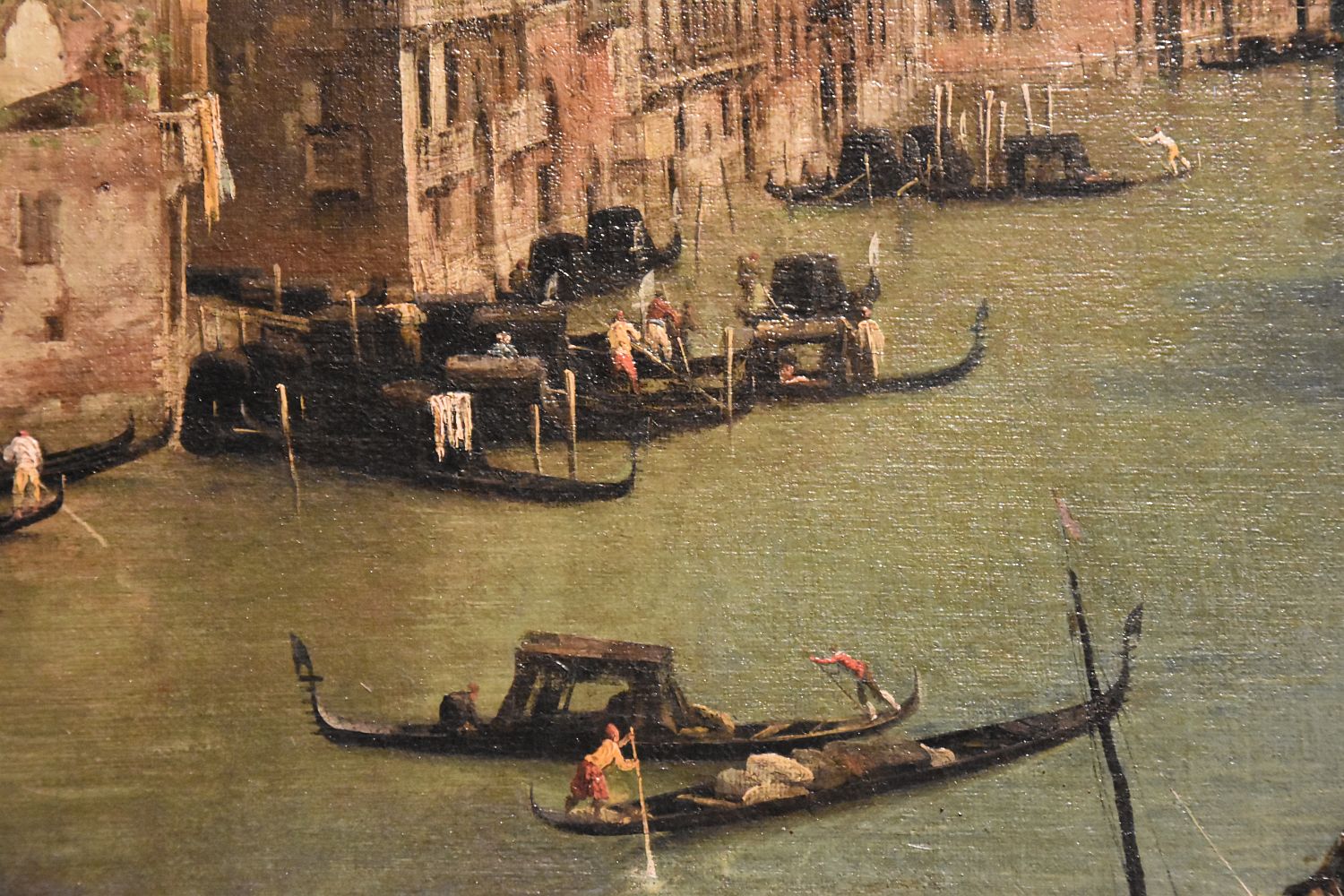 View of the Grand Canal from Ca’ Balbi, by Canaletto, detail (Ca’ Rezzonico)

We would like to invite you to take a gondola ride with us in Venice, so that we can tell you more about the history of this fascinating means of transportation and about the anecdotes that concern it.
Ciao!