'The Casino Dandolo at San Moisè' by Francesco Guardi

A beautiful painting of the 18th century... During our guided tours at Ca’ Rezzonico, the Museum of 18th century Venice, we dive into rooms that tell us the story of a libertine, sumptuous, opulent, light hearted world, and at the same time of a period of severe social criticism. In fact, the last century of the Venetian Republic, the 18th century, was an era of contradictions… 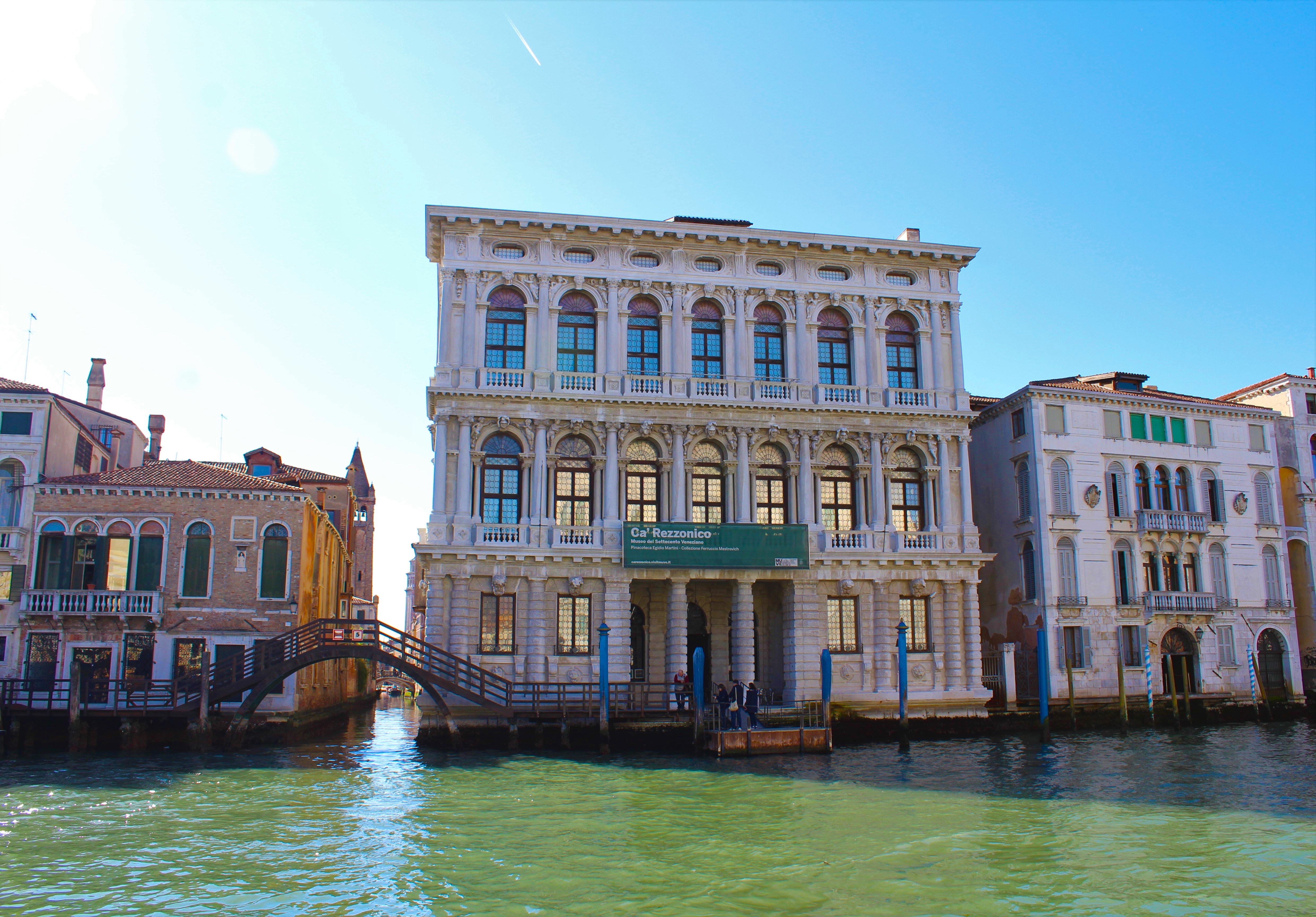 The magnificent Ca' Rezzonico along the Grand Canal, Venice

Among the superlative masterpieces that we can find in this amazing palazzo along the Grand Canal, one particular painting is quite emblematic of that controversial period: 'The Ridotto' by the famous painter Francesco Guardi. 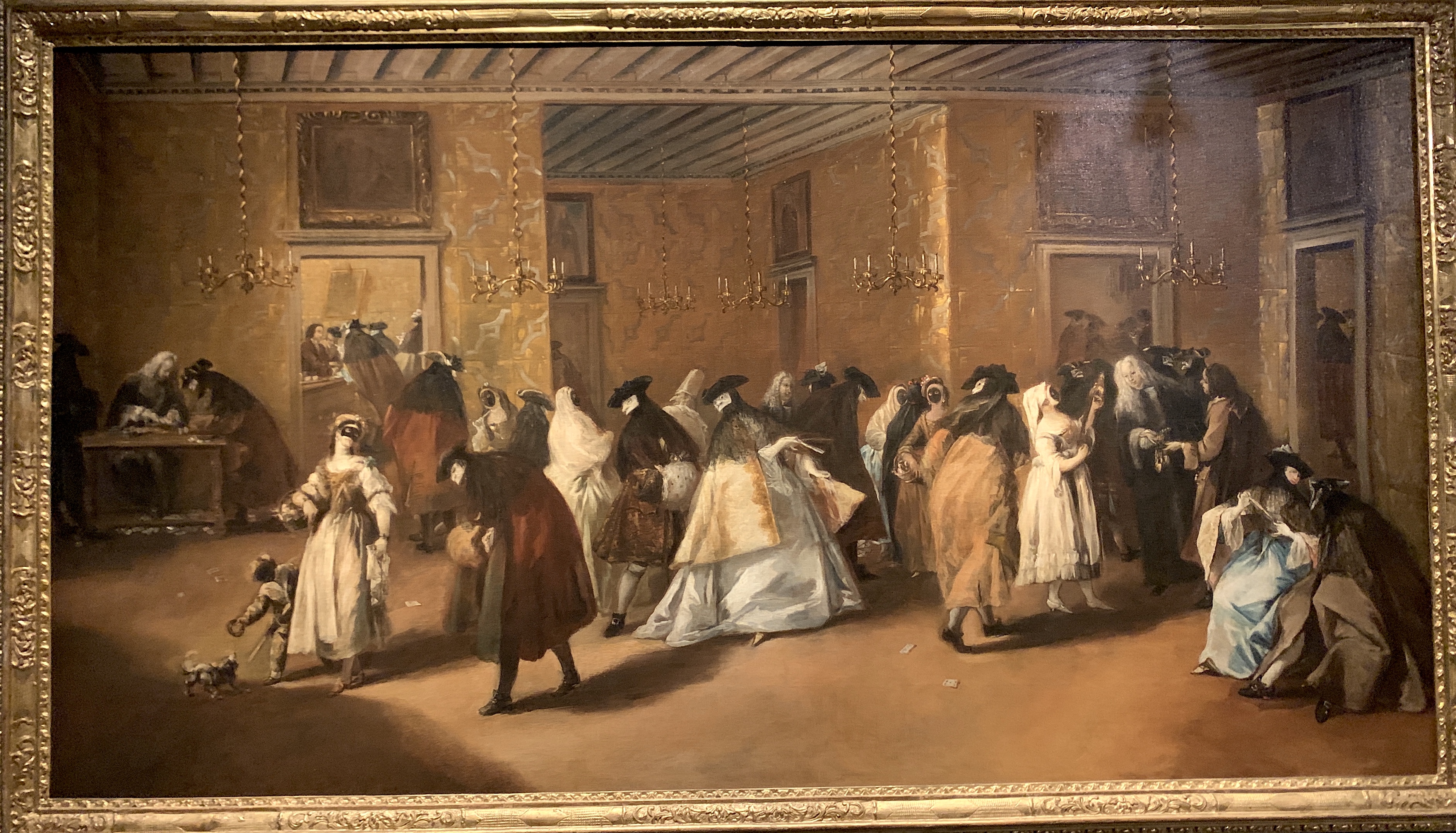 The Ridotto at San Moisè

Since gambling was illegal, the Ridotto at San Moisè (i.e. the Casino close to San Moisè Church), which was opened in 1638, was the only one permitted by law, as it was run by the government. It would be normally open during the Carnival, starting from December 26th up till Ash Wednesday.
Those who enter the casino had necessarily to wear masks, except for those who ran the gambling banks, who were salaried by the government. These were usually impoverished or anyway less rich noblemen, called Barnabotti (from St. Barnaby’s Parish).
This casino was attended both by Venetians and foreigners, noblemen and common people, the rich and the poor. As a consequence immoral activities started to be run quite soon in such a promiscuous place, for instance prostitution and usury.
For this reason the most feared council of the Republic, the Council of Ten, in 1774 decided to close the Ridotto, which was considered a place of perdition and immorality.

Francesco Guardi represented in his painting the main room of the Casino. We can immediately perceive, at the first look, the liveliness of the place, the chatting and the gambling frenzy. 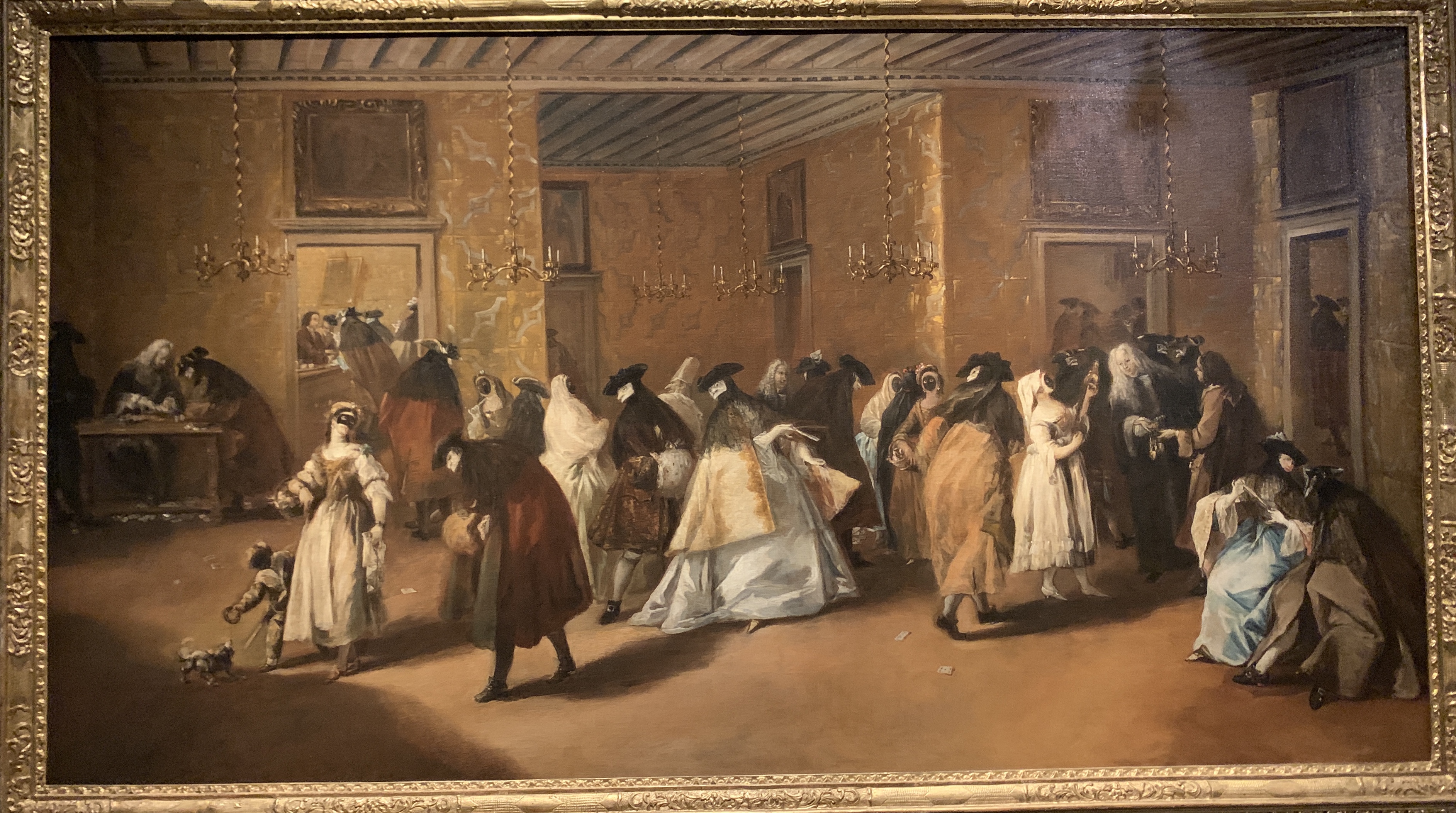 The baute and the morette were the masks that would be most frequently worn by the Venetians in such occasions. The bauta consisted in a white mask inserted into a black tricorn hat and could be worn both by men and women; the moretta was a totally black circular mask, typically female. 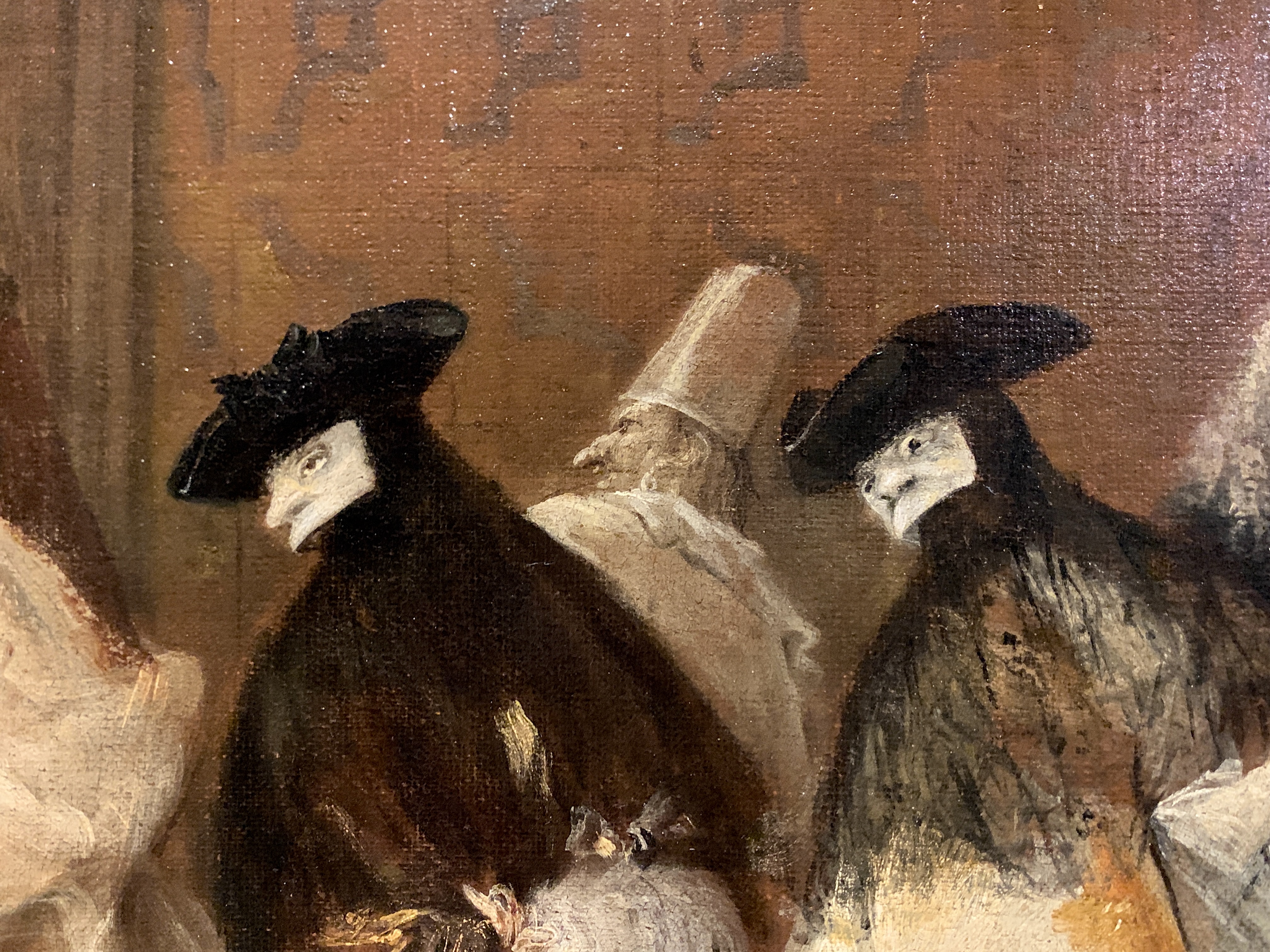 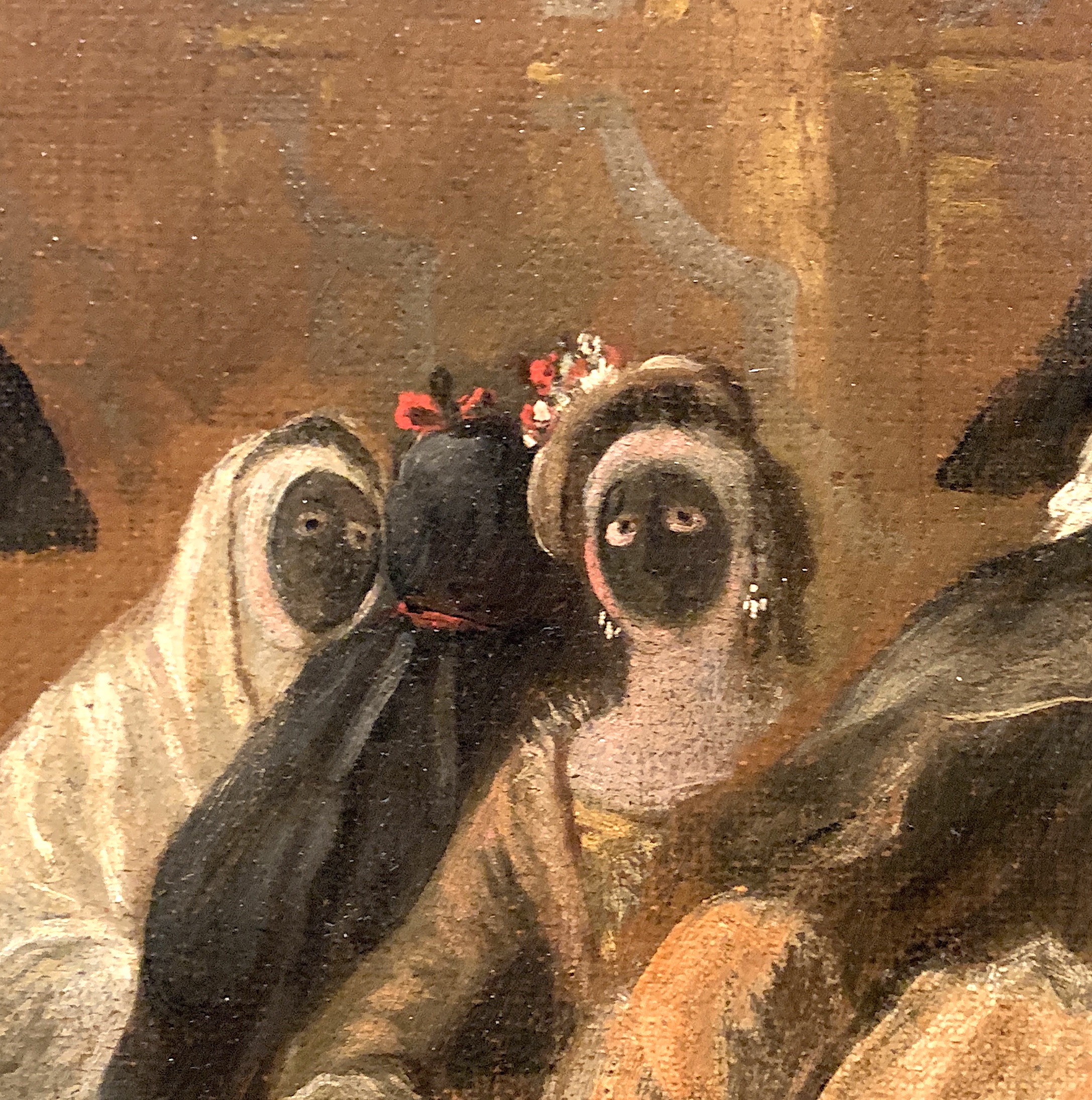 On the walls we can notice the refined decoration with cuoridoro (i.e. gilt leather), which has been lost. The chandeliers are not made out of Murano glass, as we would expect, but seem instead to be wooden and brazen, similar to those we can find in the ballroom at Ca’ Rezzonico. 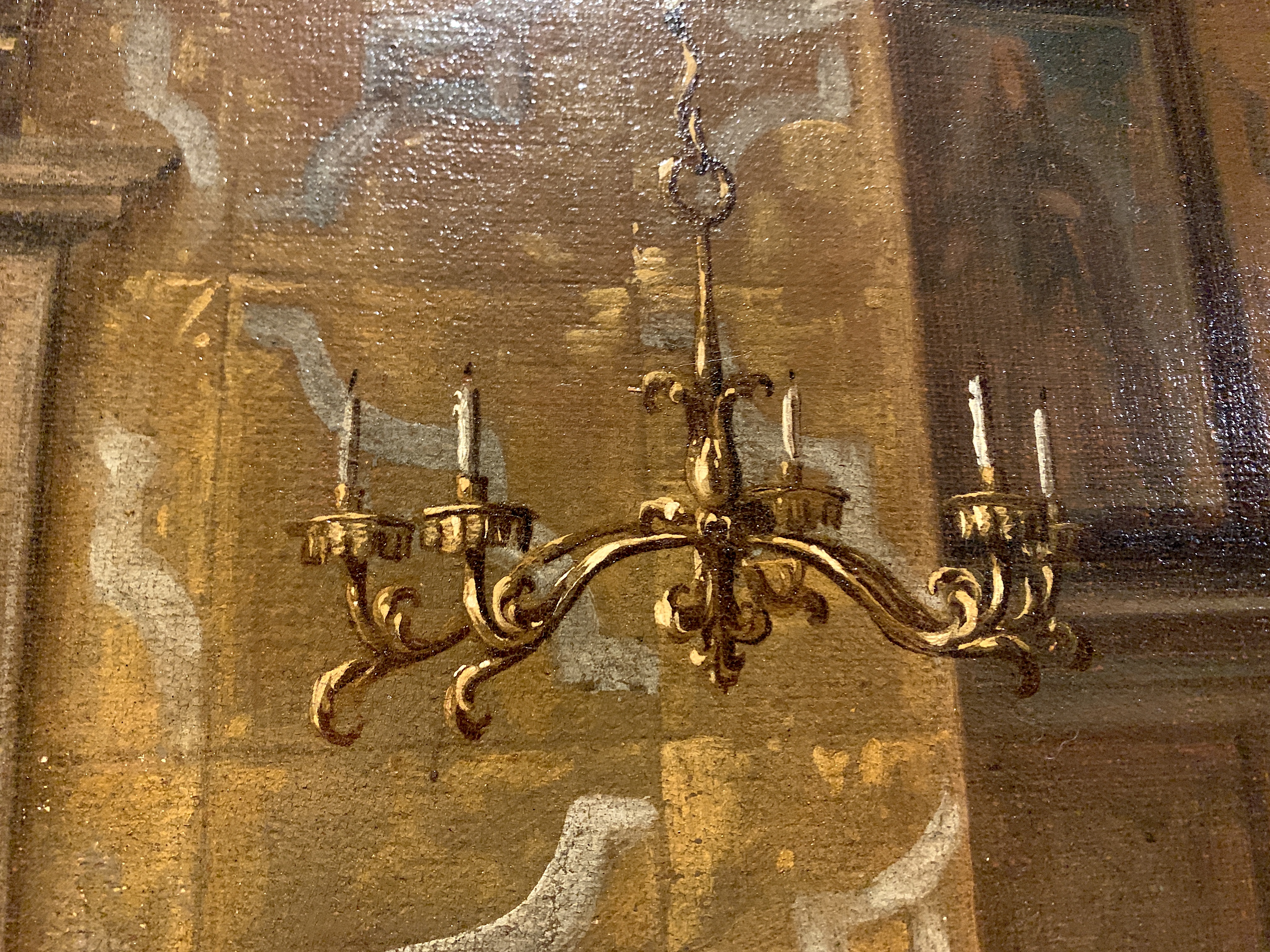 Detail of a chandelier

A lot of animation is visible at the gambling banks, covered with cards and money. On the left a masked nobleman is asking the unmasked croupier for a loan. 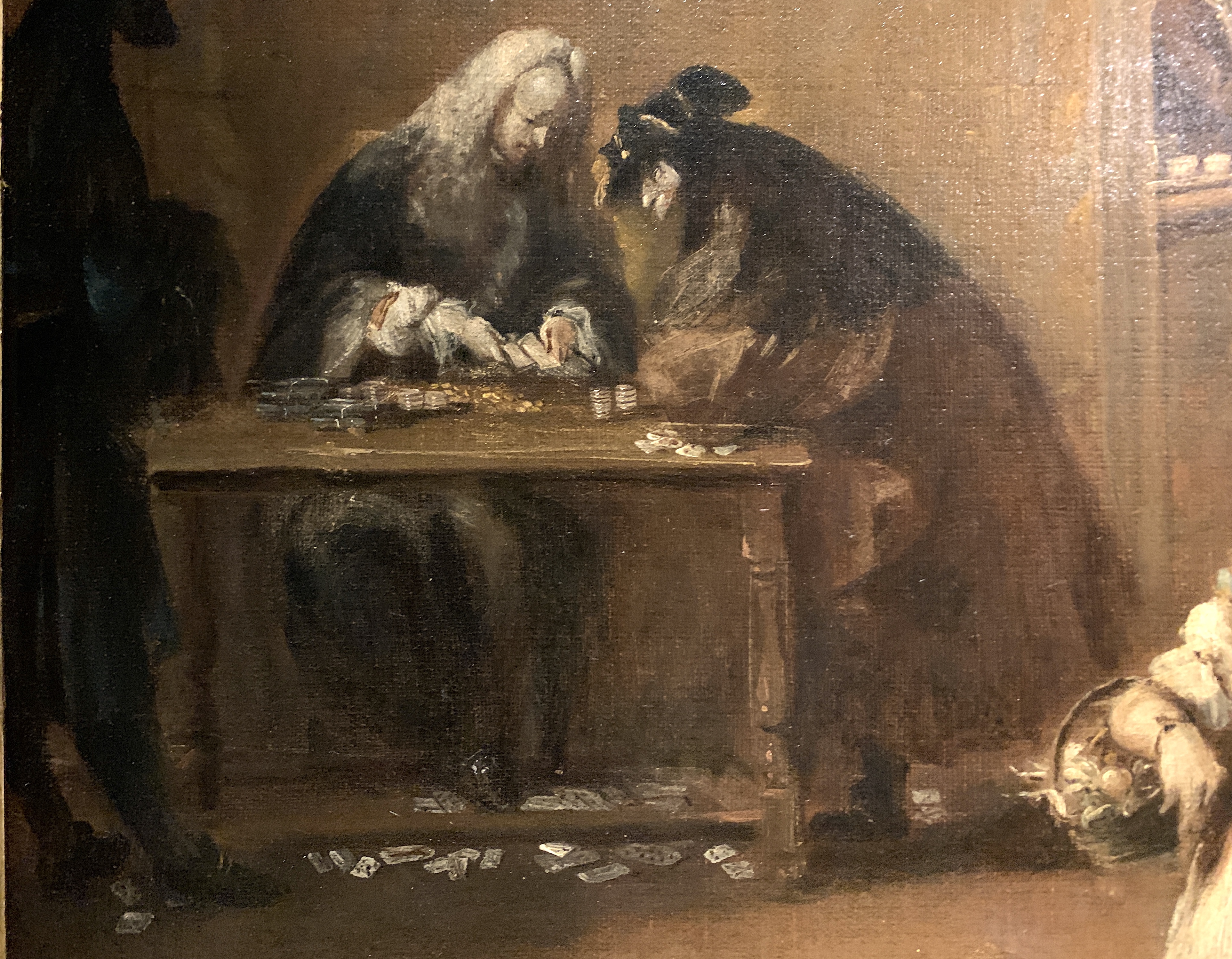 Asking for a loan

There is even a little dog, which makes the scene, if possible, even more exuberant. 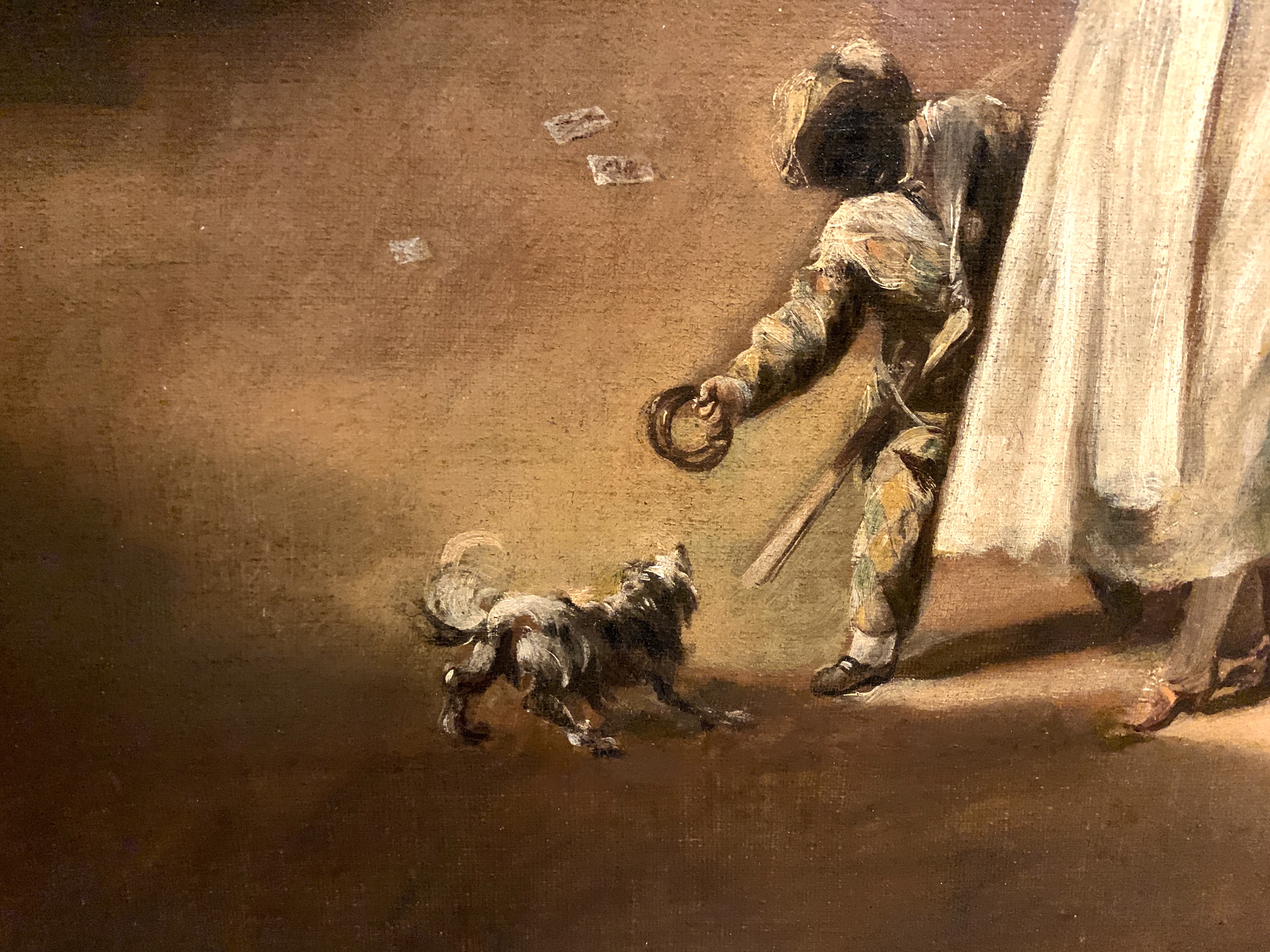 We can recognize the status of the characters just by taking a look at their clothes. The Ridotto was attended not only by the nobles, but also by the peasants, who were probably trying to tempt fate and make a fortune.
The figure dressed in white and holding a spindle draws our attention: the spindle used to be considered an attribute of the prostitutes. The woman is close to a barnabotto who is handing one of his keys to a third person… maybe they have agreed for a particular encounter? 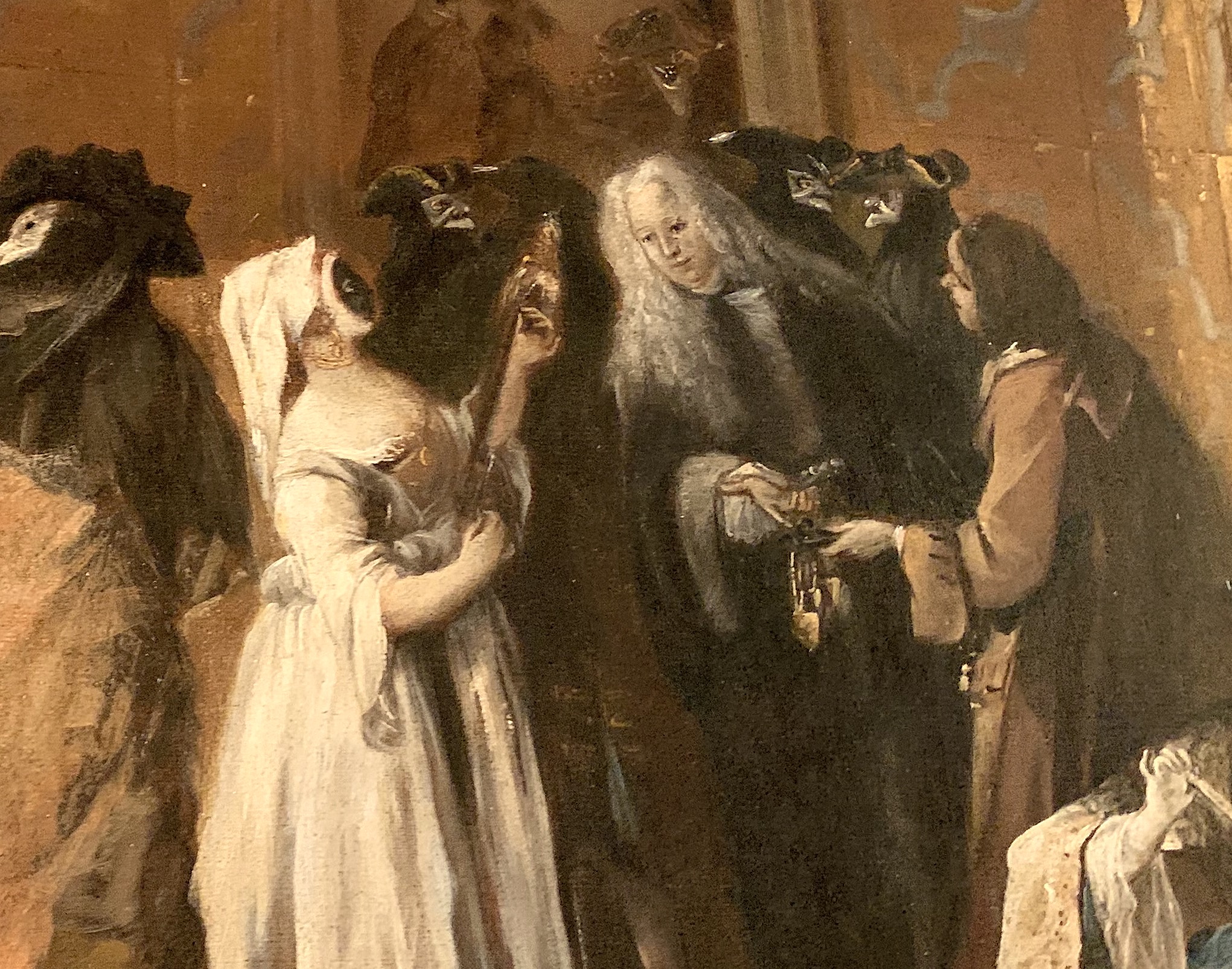 Guardi painted so many other little details in this masterpiece of his: the costumes, stunning in their elegance, the transparent veils, the shiny buckles… and have you noticed that another gambling room opens up in the background?
The atmosphere surrounding the scene is golden, warm, joyful, full of those unconsciousness and irresponsibility which made the Ridotto so famous abroad, that it became an essential stop on the Grand Tour.
We will be waiting for you to take you on a guided tour of Ca’ Rezzonico! Ciao!
Contacts: info@guidedtoursinvenice.com

Our guided and private tours of Venice. (section: Blog)

The carnival in Venice. (section: Blog)

The Pulcinella at Ca' Rezzonico: private tours of an amazing museum of Venice. (YouTube) 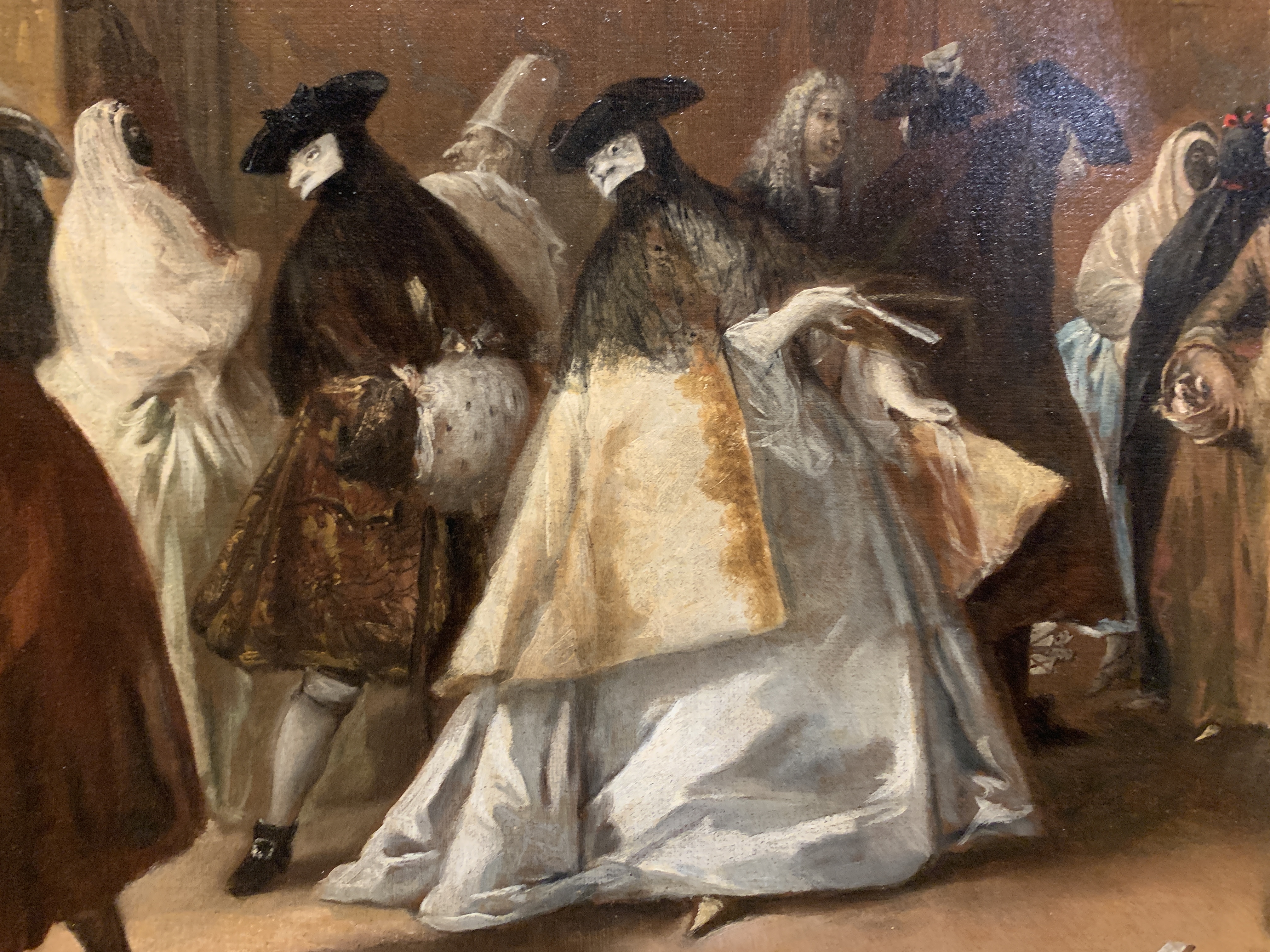