Rossana Molinatti: how to bring Art to St. Mark’s Square during the Venetian Carnival.

An exceptional artisan during Carnival in Venice

The Carnival in Venice is famous all over the world: it is a feast full of music, masks, colors, confetti, joy.
To take part in this adventure is a unique experience, it seems like you have jumped back into the past, in a period when masks were considered elements of everyday life, not just mere “decorations”.

Thinking about the relationship between the Venetian Carnival and Art, what immediately comes to mind is Carlo Goldoni’s comedies, the exquisite small paintings by Pietro Longhi with subjects from everyday life of the 18th century, concerts of baroque music written in the same period. We do not normally associate Carnival costumes with Art. Some lady, however, has decided to transform her passion for Art into unique costumes, with the aim of bringing Art to St. Mark’s Square during the Carnival: we are talking about Rossana Molinatti.

Our meeting with Rossana
During the winter we met Rossana: she received us in her own house. It was a real pleasure to get to know her… and it was also great to take a look at the projects for her new costume (stay tuned: we will soon unveil what she is working on for the next edition of the Carnival!). What amazed us, though, was the lady herself: a force of Nature, a volcanic personality, one entire world in a tiny lady. 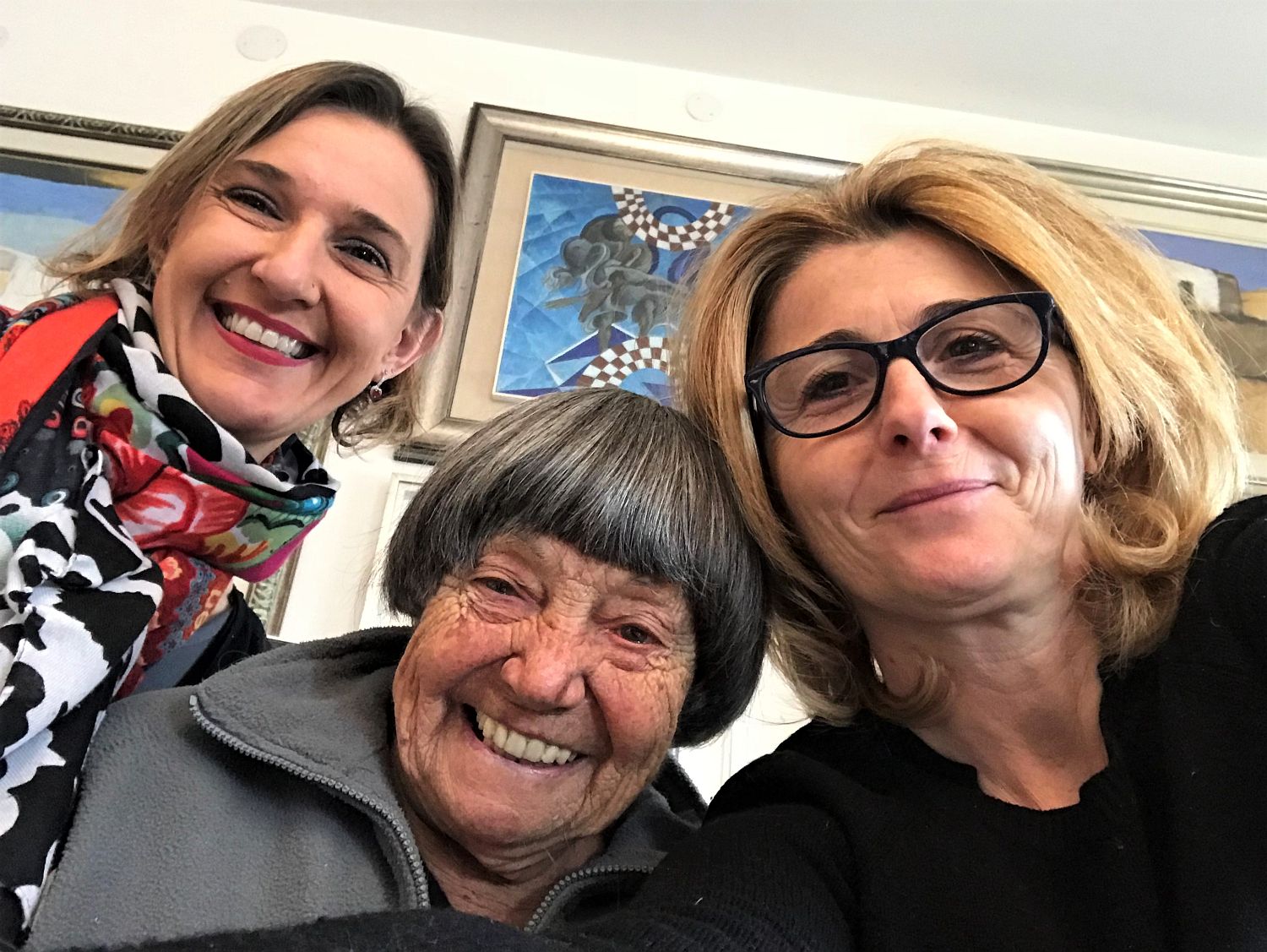 Rossana with Cinzia and Monica

Despite her age, she is full of energy, she never rests. Along with her love for Art, Rossana has a lot of other passions: she teaches yoga in Mestre and in Venice, she is fond of photography, she makes short films about Art, she teaches movie techniques at the University of the Elder.

Rossana got her degree from the Academy of Fine Arts in Venice, but she was forced quite soon to give up the idea to dedicate her entire life to Art: her father died soon after her graduation, and she had to find a job quickly. She ended up working for 36 years for the Telephone Company. However, this did not put an end toher love for beauty, to her curiosity, to her desire of studying and producing Art: she would continue to pursue her interests in a lot of different ways…

How to bring Art to St. Mark’s
Eventually, she was struck with an amazing idea: bringing interesting works of art to St. Mark’s Square, so that a large number of people could admire real beauty. And she found quite an original way to do it, in a fairly busy time of the year: recreating personal interpretations of such works and wearing them as costumes during the Venetian Carnival. 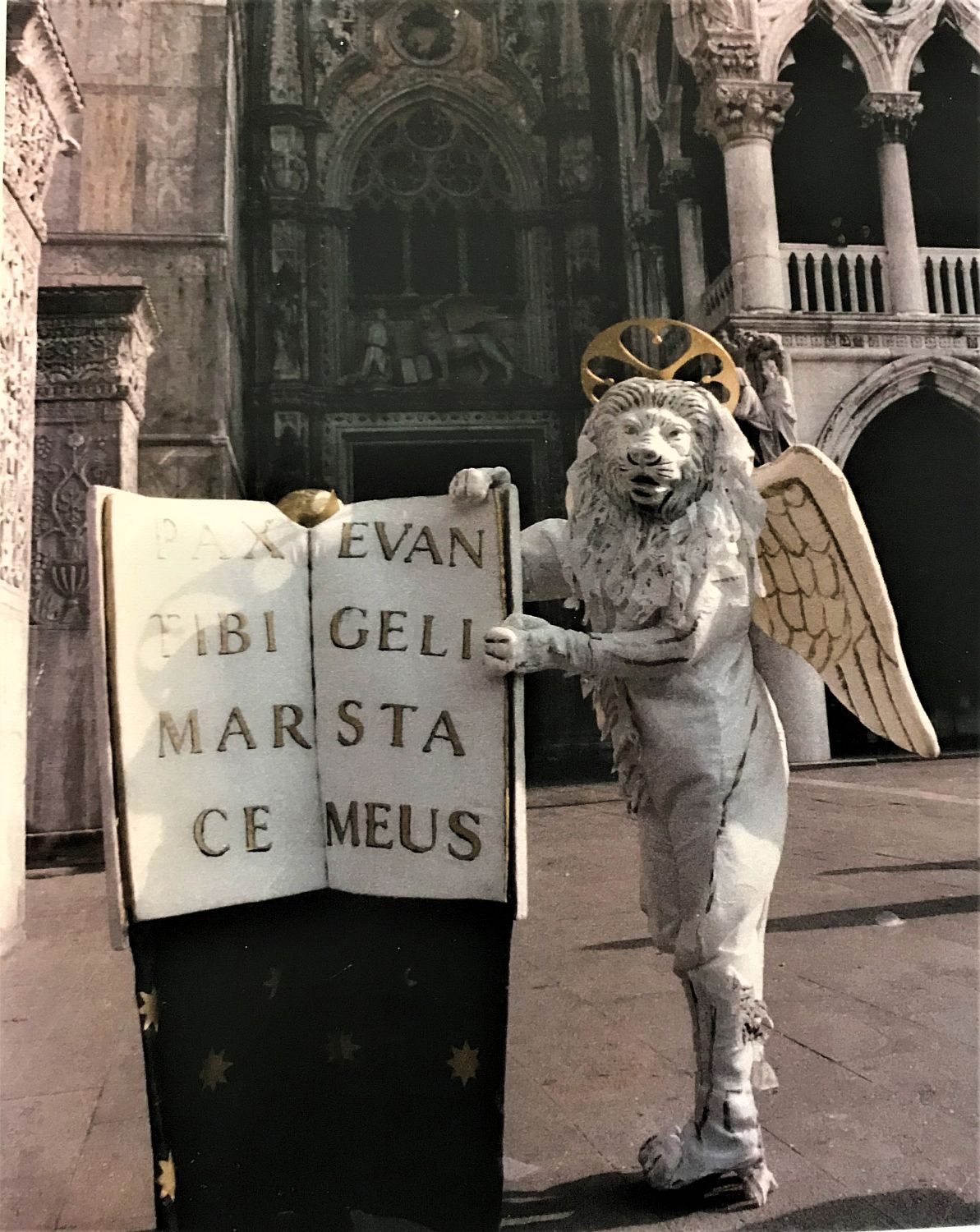 St. Mark’s Lion with the book 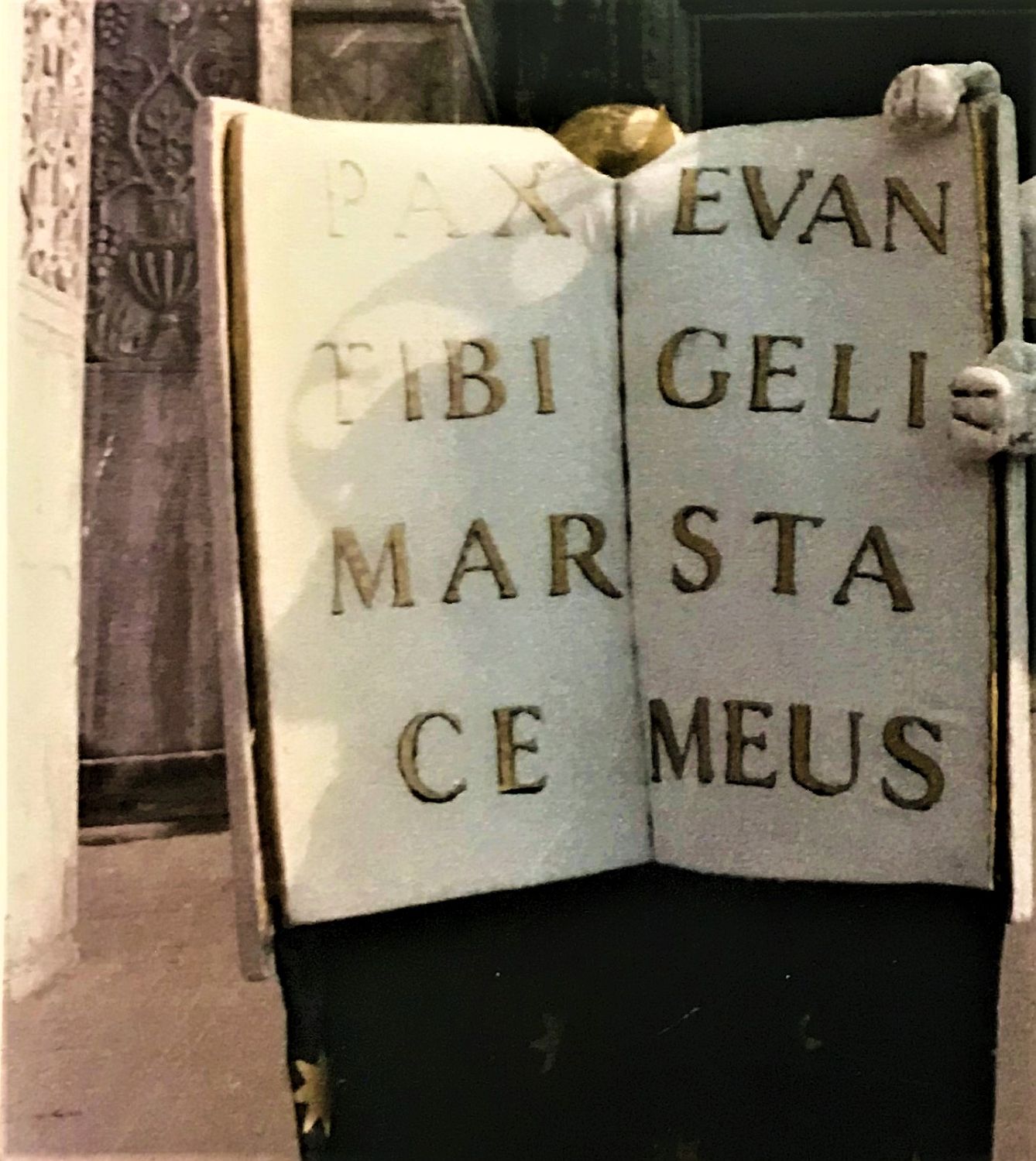 What could have she started with if not the very symbol of Venice? One of her first creations, with the help of a friend of hers, was in fact the reproduction of the famous St. Mark’s Lion carrying the book. “I was the book!”, Rossana tells us, laughing. 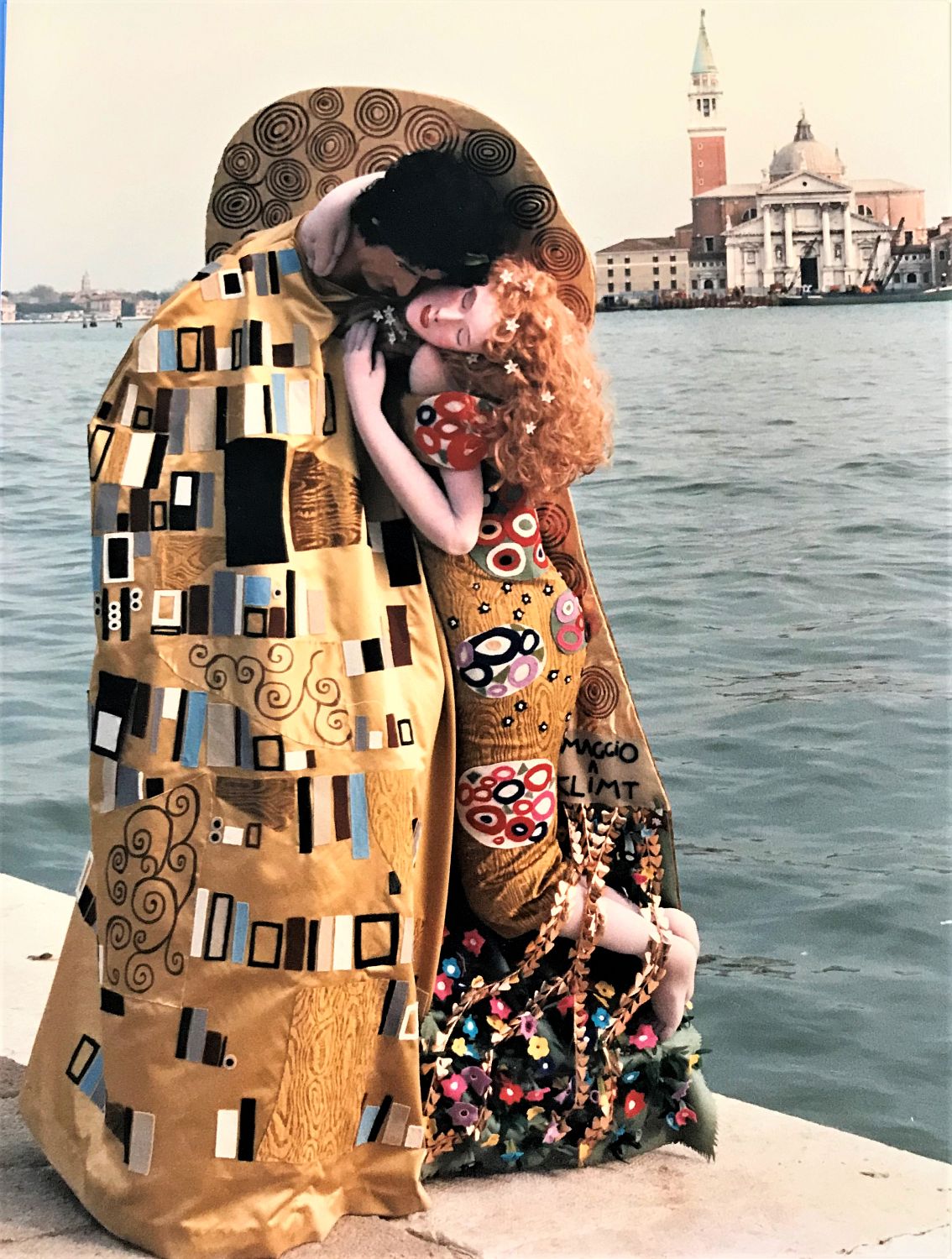 One of her best costumes was surely “The Kiss”, from a painting by Gustav Klimt: for this marvelous work, Rossana was assigned the Golden Lion as a prize. Just imagine: this extremely famous painting suddenly appears in St. Mark’s, walks past you, crosses the Square, stops for a while by the quay… Astonishing! But where was Rossana? She was inside the costume, entirely hidden; she could see thanks to a slit that was cut in the central black square! 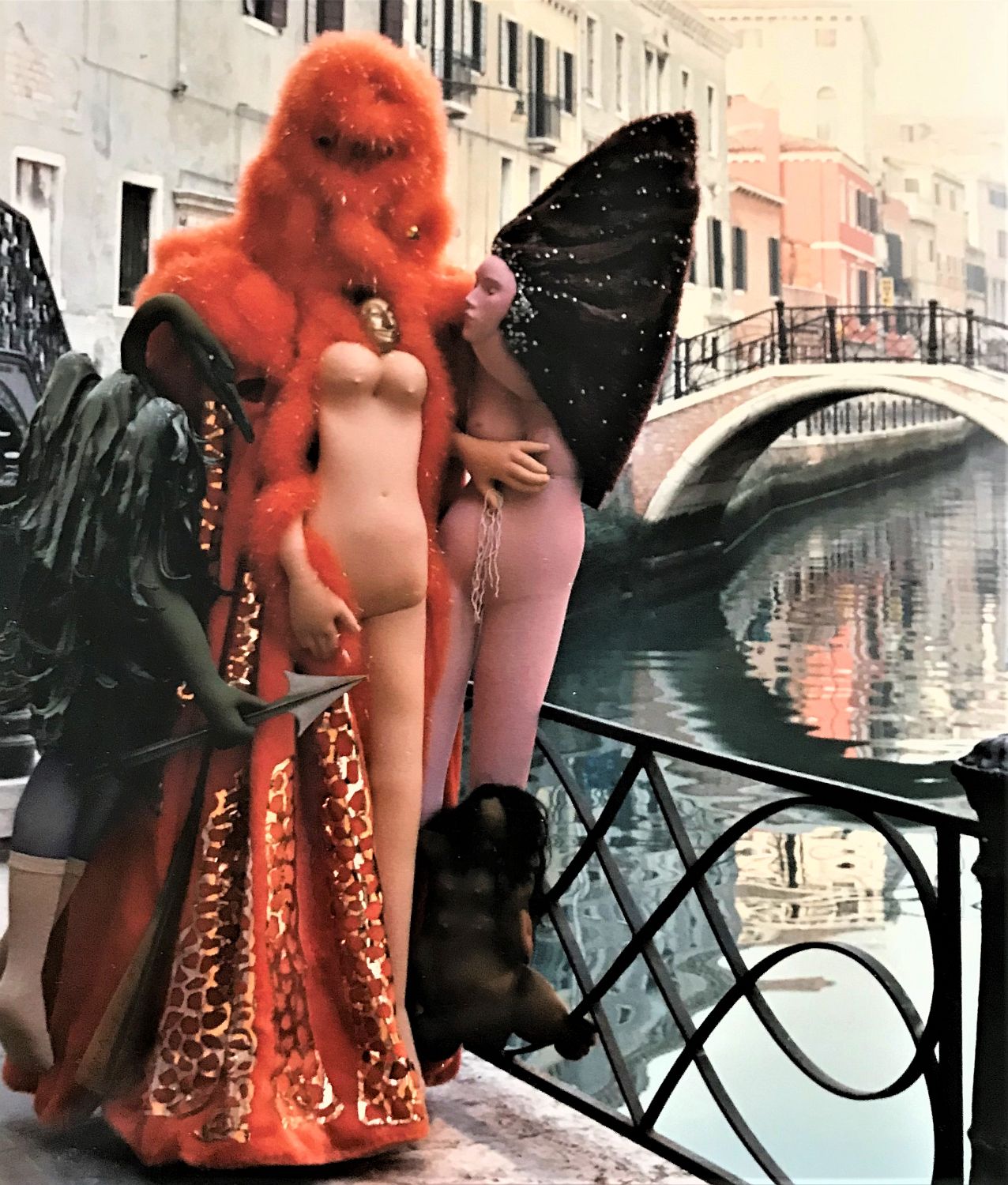 The Attirement of the Bride, 1988 (from Max Ernst)

One other extraordinary costume was “The Attirement of the Bride”, 1988, inspired by the painting by Max Ernst, at the Guggenheim Museum in Venice. It seemed like the surrealistic painting had unexpectedly materialized in all its enigmatic voluptuousness. You can just imagine the comments both of the Venetians and the foreign guests, as Rossana was passing by inside this concrete, and at the same time absurd, costume!

To her city, which is also ours, Rossana dedicated, among the others, two quite interesting masks inspired by the works of art of two great Venetian masters of the past centuries: Giambattista Tiepolo and Paolo Veronese. 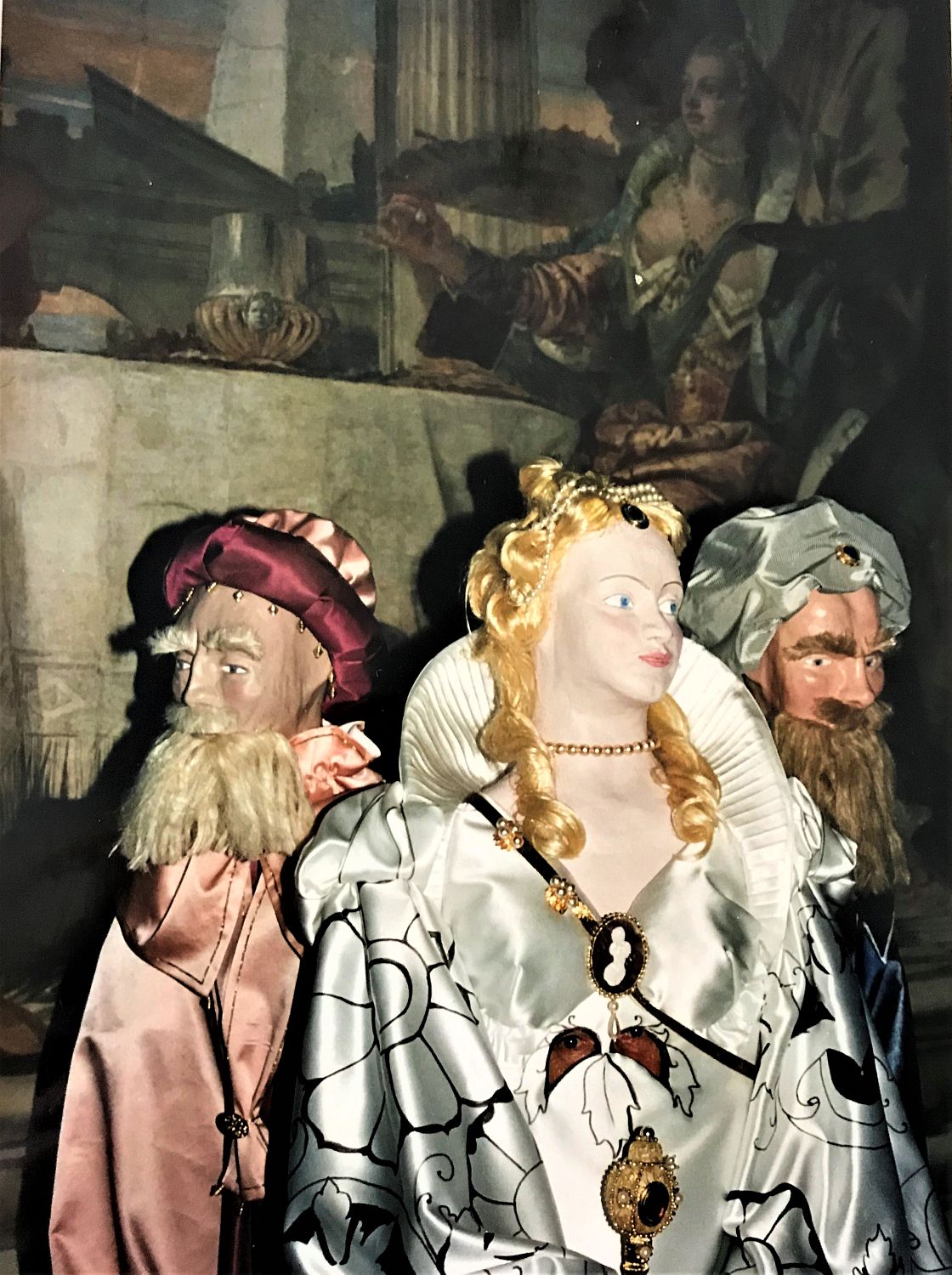 In 1996, three hundred years since Giambattista Tiepolo’s birth, several events were dedicated in Venice to this excellent painter, whose frescoes are definitely among the best masterpieces of the Venetian Art of the 18th century. Rossana decided to celebrate this anniversary her own way, creating a costume inspired by theCleopatra, represented as a Venetian noble lady, marvelously painted by Tiepolo at Palazzo Labia. 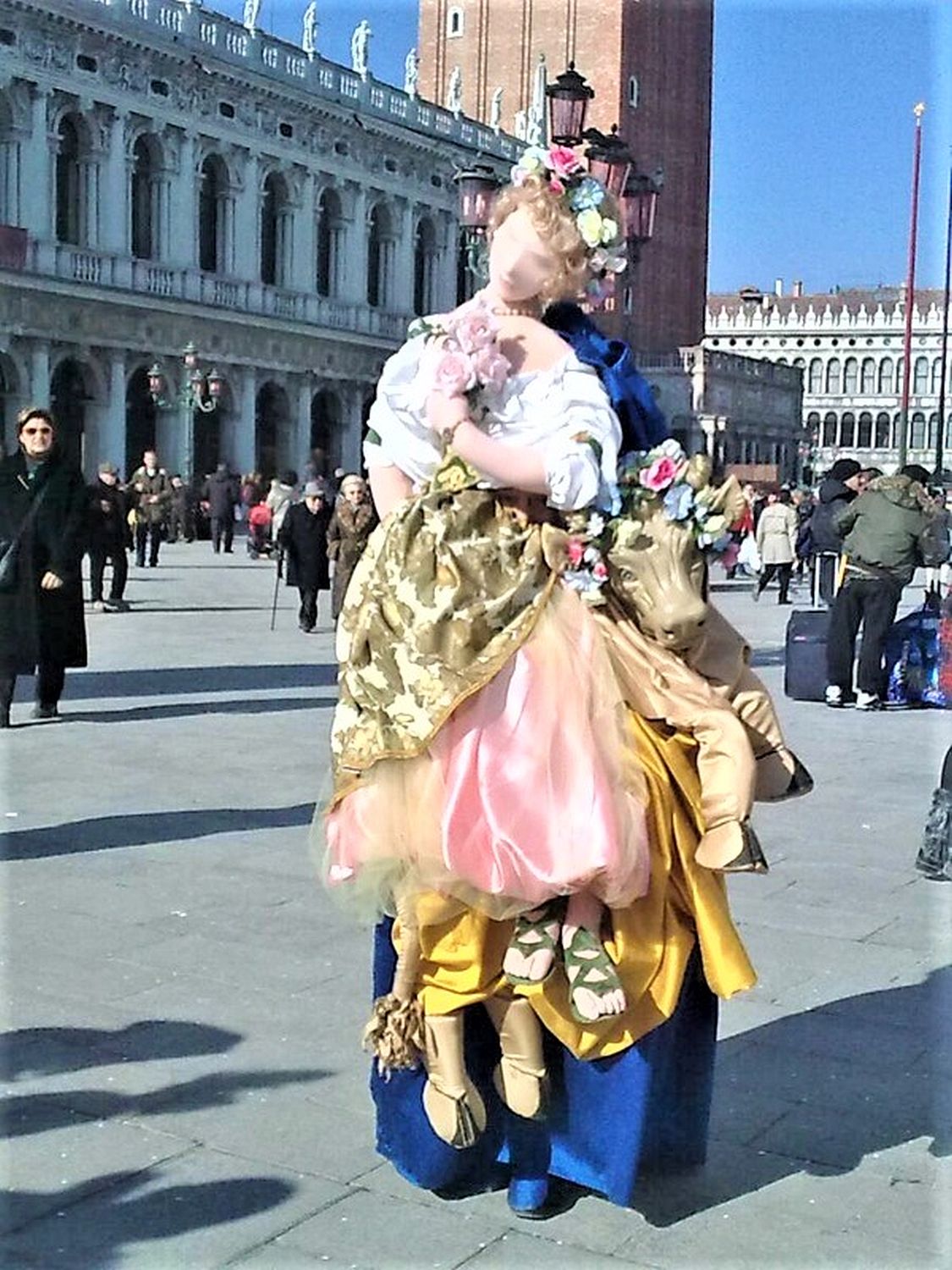 In 2012 Rossana homages Paolo Veronese with a costume from the famous painting in the Doges’ Palace, “The Rape of Europa”. Europa, represented as a young Venetian bride of the 16th century, elegantly dressed and astonishingly beautiful, is seduced by Jupiter, who has disguised himself as a white bull. Cloths, colors, details: all the elements of Rossana’s masterpiece seem as if they have just come out of the painting.

For her costumes Rossana frequently uses recovery materials, but cloths and some details are accurately chosen and purchased, for a spectacular result.

Waiting for the 2018 edition of the Carnival…
We are about to unveil, in our next post, Rossana’s new costume for the coming up edition of the Carnival. Meanwhile, waiting for you, to take you on a private guided tour in Venice, we take leave with the picture of one of our favorite costumes: “Hector and Andromaca”, of 1994, inspired by the homonymous painting byGiorgio De Chirico. We also suggest you to take a look at Rossana Molinatti’s web site (rossanamolinatti.altervista.org), to get more information about this exceptional woman. 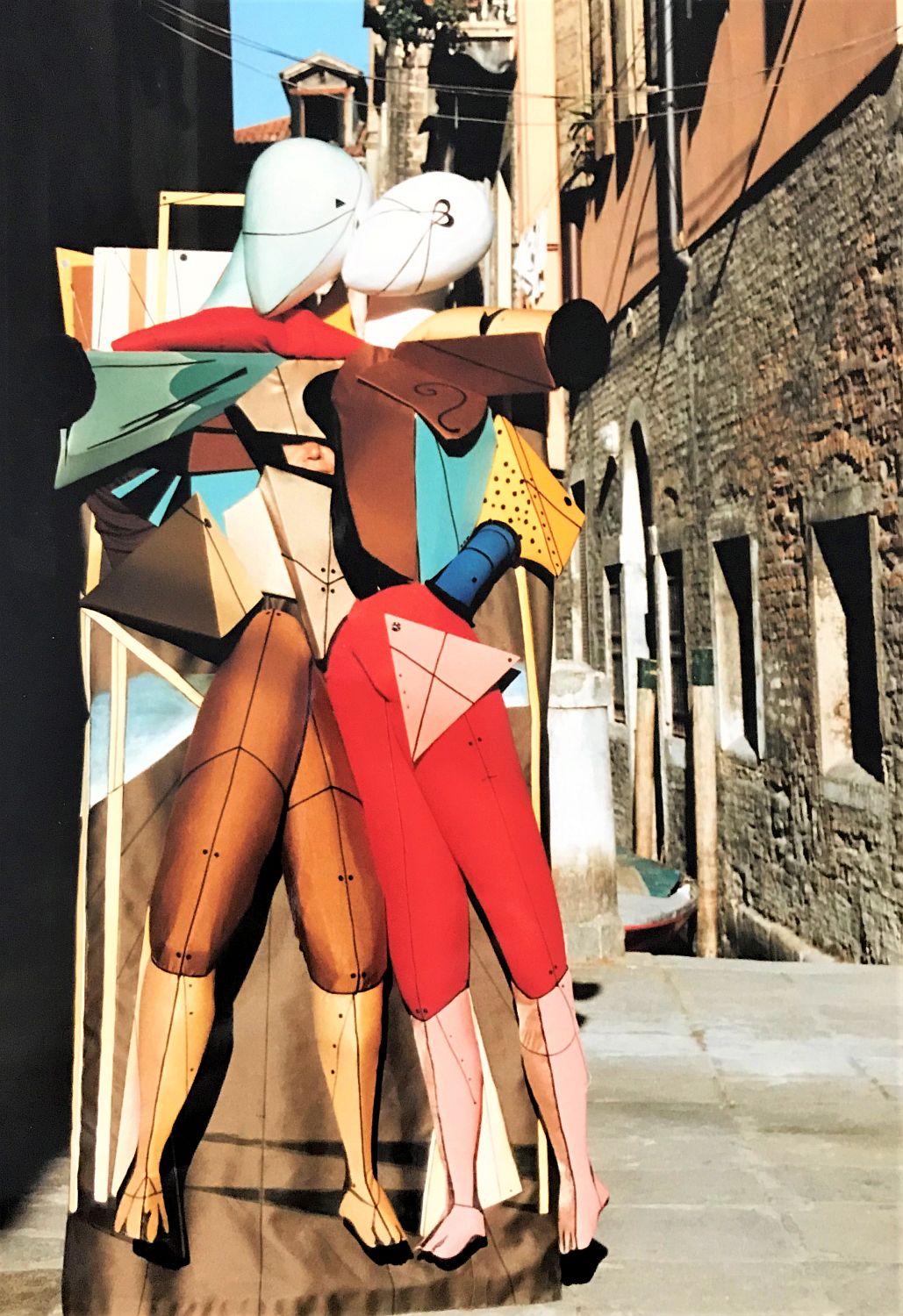 Several years ago Rossana sold, for quite a small amount of money, most of her costumes to the City Hall of Venice, hoping to see them eventually displayed in a museum or in some exhibits. Two exhibits were organized over the recent years, one in Acireale (Catania, Sicily) and one in Martellago, in the Venetian mainland. Now the costumes are in a storage at Marcon (Venice). Despite the fact that Rossana has been asking for a long time about the intentions of the local authorities concerning her works of art, we do not know, yet, which will be their destiny… Wouldn’t it be great if they could become part of an exceptional museum, entirely dedicated to the Carnival?

We say goodbye to you showing you this picture of another Rossana’s costume made for the 2010 Carnival edition, The Virgin (from Klimt). 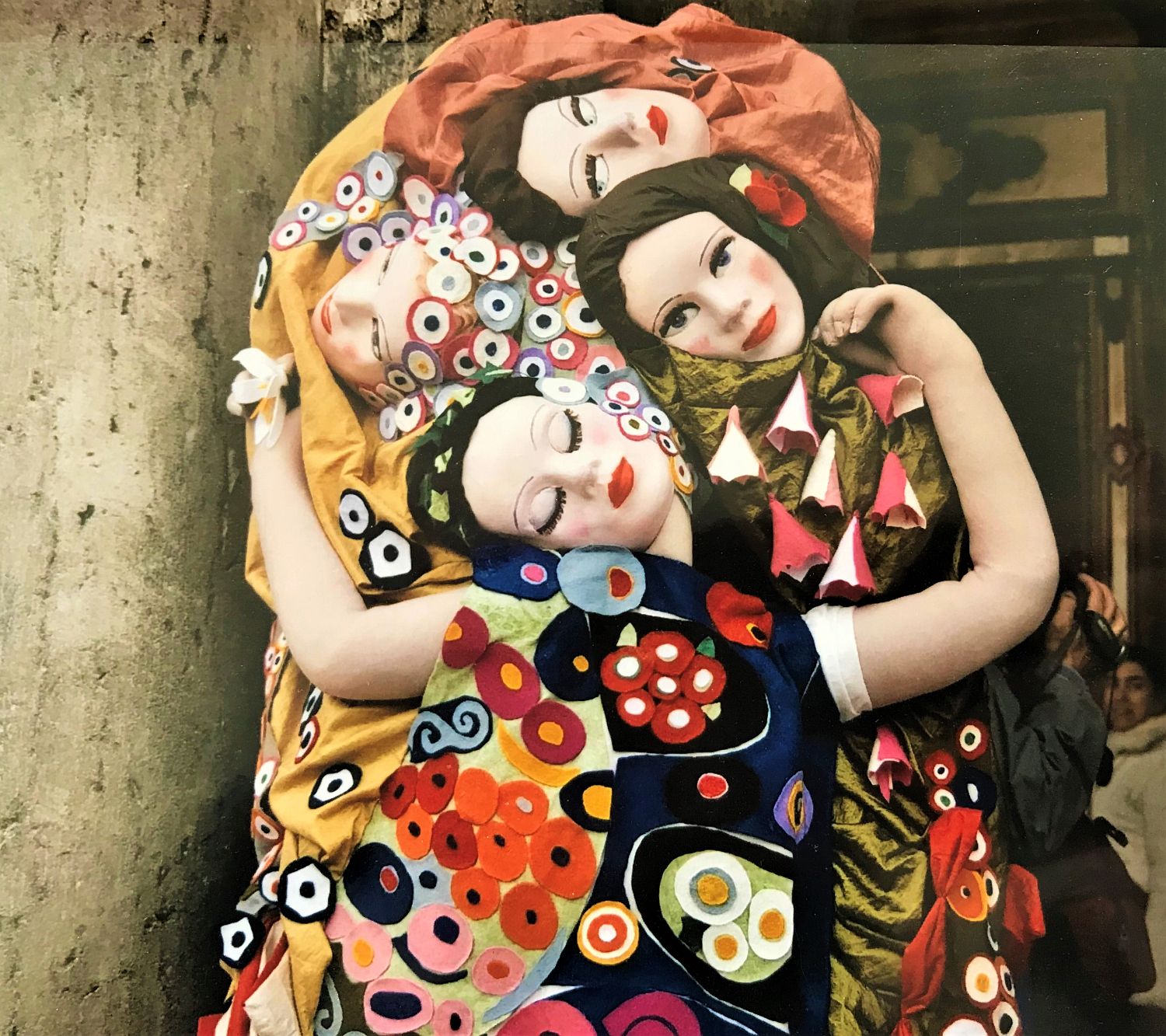