Palazzo Soranzo Van Axel: a pearl in the heart of Venice

Getting lost in Venice, you discover Venetian jewels

As everybody knows, Venice is quite a small city: its surface is really limited.
However, it is extremely rich as far as works of art are concerned, as well as unusual views and unique atmospheres: there is always something new to discover and admire.

Walking in the area of  Santa Maria dei Miracoli  in these days it is possible to enter one of those doors that had been kept closed for a long time: it is one of the two land doors of the fabulous Palazzo Soranzo Van Axel, the restoration of which has just been completed after roughly ten years of work. 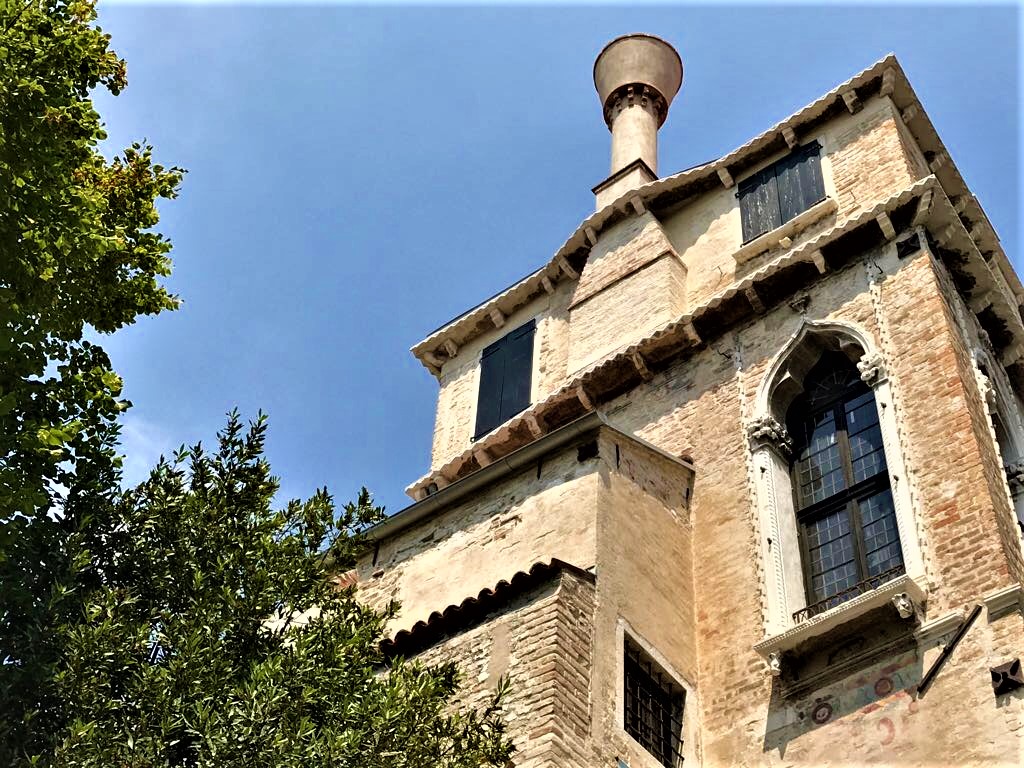 This marvelous house was built by the Soranzo family at the end of the 15th century, in exquisite Gothic style, at the same time when the city was feeling the first Renaissance influences (the church of Santa Maria dei Miracoli nearby was built only a few years later). The building was to occupy the area where once stood the houses of the Gradenigo family. As was common, the Soranzo did not hesitate to use precious materials and decorative elements of the former buildings fot their new house. Inserted in the walls we can find typical Byzantine decoration and bas-reliefs.

Probably keeping in mind that the house was to be eventually inherited by the two sons, Soranzo decided to build a structure with two land entrances and two water ones on the canals; two Gothic external staircases lead to two noble floors from two different courtyards; each courtyard has its own well. 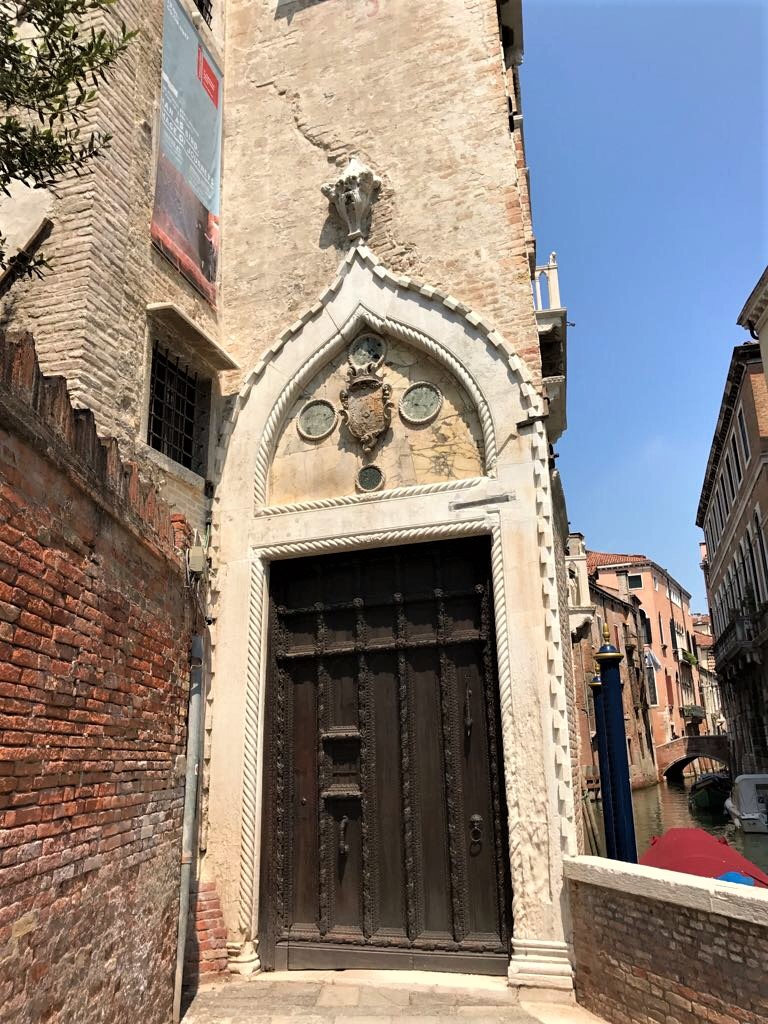 Monumental entrance from the fondamenta

The well in the second courtyard is still the original one, with the coat of arms of the Soranzos. It still preserves the pulley that was needed to raise the bucket with water up to the floor of the servants.

In this courtyard it is possible to admire ancient traces of polychrome frescoes, which have reappeared during the accurate restoration that has jus been carried out. More frescoes have been also found on the external façade.

The house passed in the following centuries to the Veniers and the Sanudos. In the 17th century it was then bought by the Dutch merchant family Van Axel, who placed their coat of arms above the entrance from the fondamenta, where we can still see it. This shield is very particular, much different from the typical coats of arms of the Venetian families, much more complex… 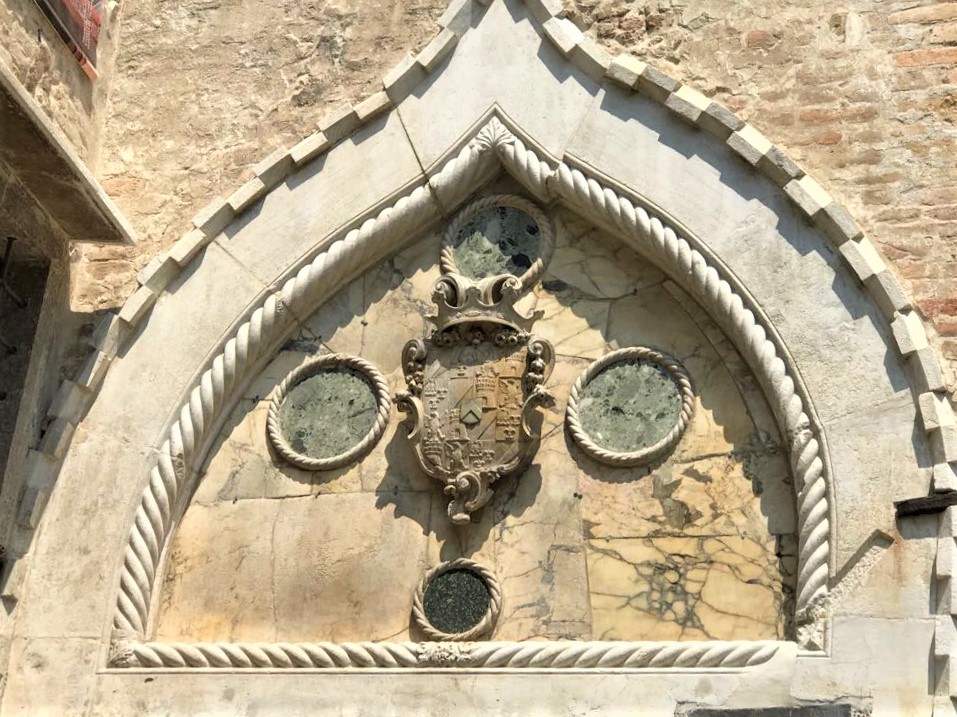 Coat of arms of the Van Axels

In 1665 this family was able to puchase the noble title from the Venetian Republic, thus entering the noble class of the State. However, they always remainedforeigners in town, although they had organized a wedding between one of their members with a girl of the Bembos, a noble Venetian family, in order to try to enter the ruling class also by marriage. But those that had bought their noble title, instead of having been born in the nobility of Venice, were always considered somehow inferior…

In the 20th century the palazzo was bought by count Barozzi, who brought in there several pieces of his art collection, featuring beautiful sculptures an reliefs. It is worth to take a look at the unique basin carved around the year 1000.

Also the Venetian sarcophagus, dating back probably to the 15th century, is really interesting: the relief carved on one side represents a Venetian ship with the sailors trying to control it in the storm. The inscriptions refer to an episode of the Roman history, but they suit quite well the Venetian reality of the past: Navigare necesse est, vivere non necesse (“It is necessary to sail further, non to live”). These words really match the Venetian vocation for dangerous journeys.

During the 20th century the house was then divided into different apartments and public offices. Today it is privately owned and it is possible to organize within this spectacular frame exhibits and events. For the 57th Venice Biennale it hosts very interesting works of contemporary art, among which it is possible to admireparticular installations by Russian artists (the event has been in fact organized in cooperation with the Puškin State Museum of Fine Arts, Moscow).

The entry in this period is free of charge. This palazzo really deserves a visit. The three of us would be more than happy to guide you to this almost unknown jewel. In order to stimulate your curiosity, we take leave with some pictures of refined and precious details of the decoration of palazzo Soranzo Van Axel.