Our private tours of Venice: the bell tower in St. Mark's square

Would you like to enjoy the view from the top together with our explanations? It is majestic, it dominates the entire Square, it is visible from the far away islands in the Lagoon: St. Mark’s Bell Tower is the Landlord of Venice, as it is affectionately called by the Venetians. 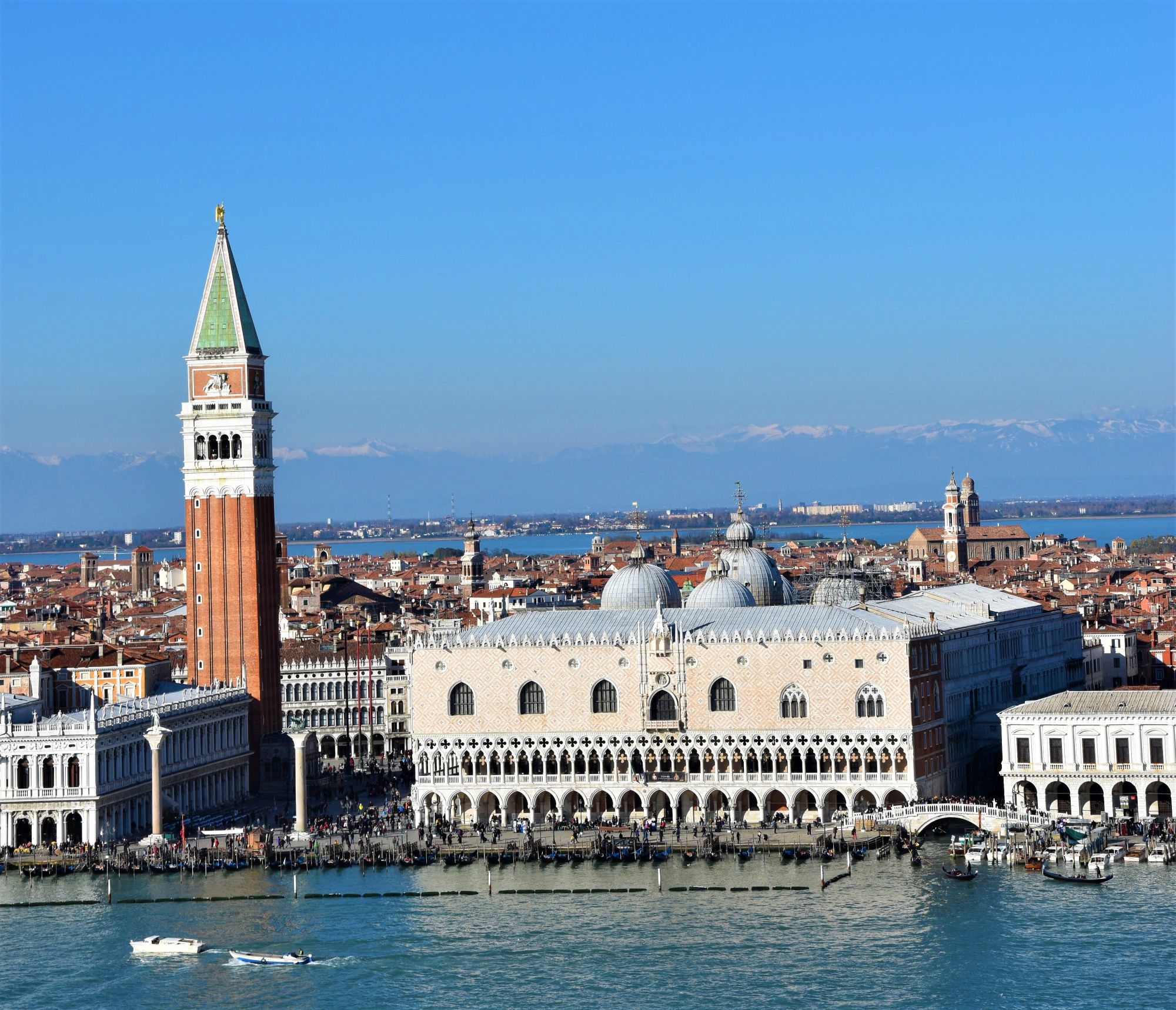 The campanile seen from the bell tower of San Giorgio island

Characteristics of the Bell Tower

It is the tallest tower in town, almost 100 mt. high (approximately 328 feet), including the sculpture of the angel on top.
At the bottom a precious and elegant loggia, in exquisite Renaissance style, marks the entrance to the tower: it was projected by architect Jacopo Sansovino and it was built between 1537 and 1549. 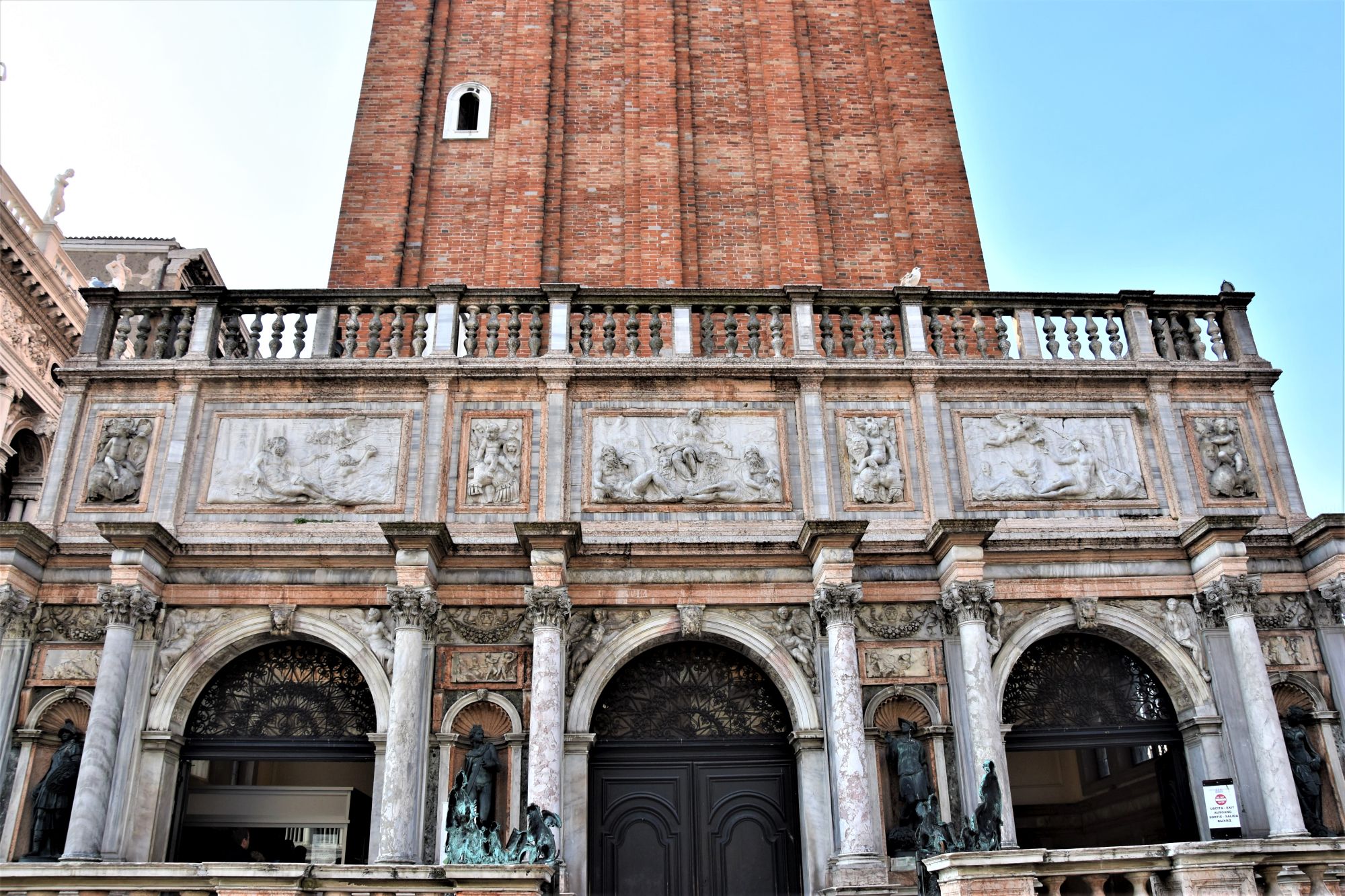 The belfry on top of the brick work stands out against the blue sky with its white limestone profiles. Right above we can admire on each side of the Bell Tower four reliefs, two of them representing the winged lion, the other two representing Venice. 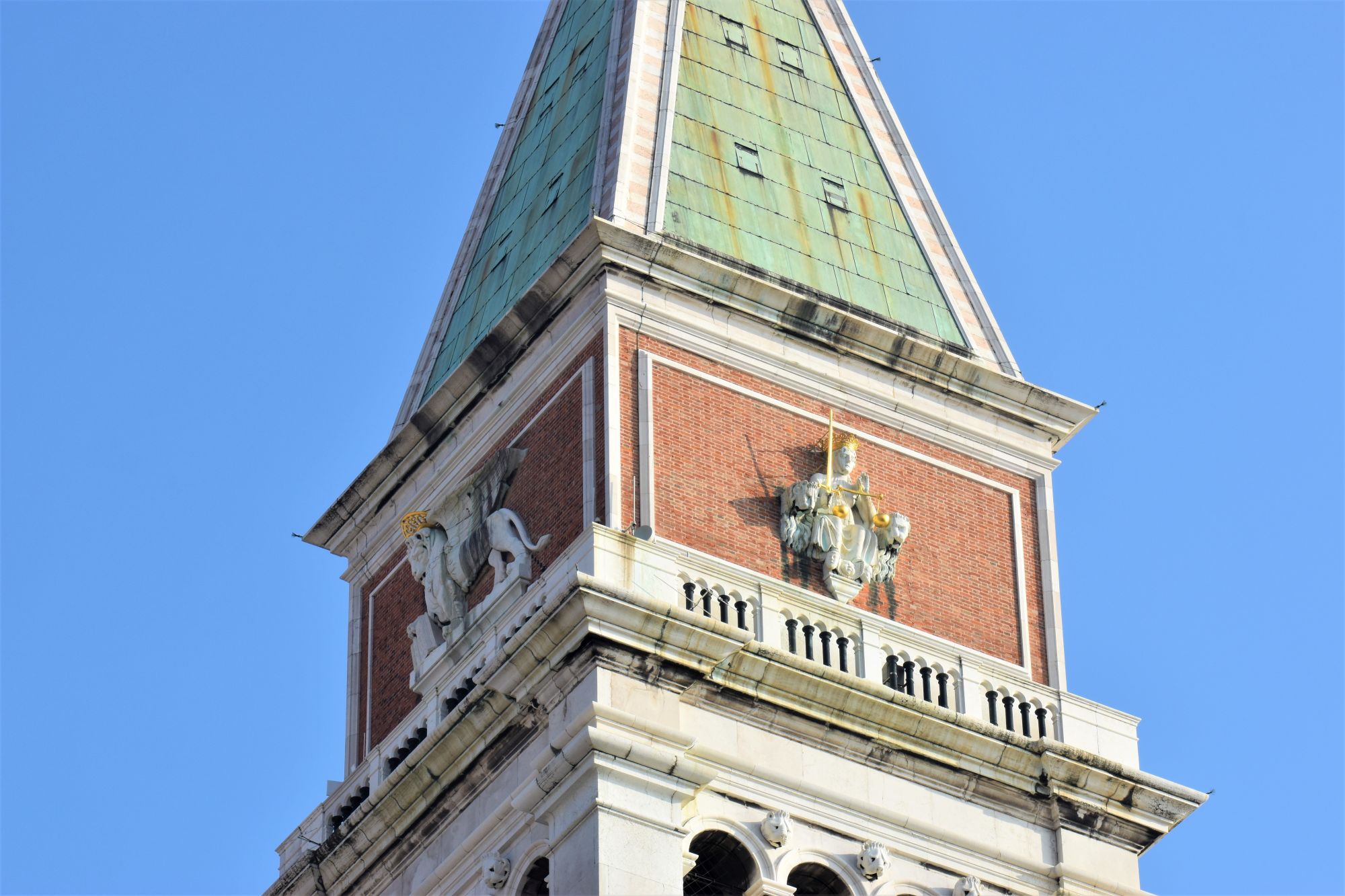 The Winged Lion and Venice

The green pyramid on top gives to the tower an upward thrust, as to make the structure look lighter. Way up high there stands the statue of Archangel Gabriel, with its enormous wings. The Archangel rotates on a pivot, serving as a weathercock: its position changes several times during the day, and depending on it the Venetians can understand how the weather will change! 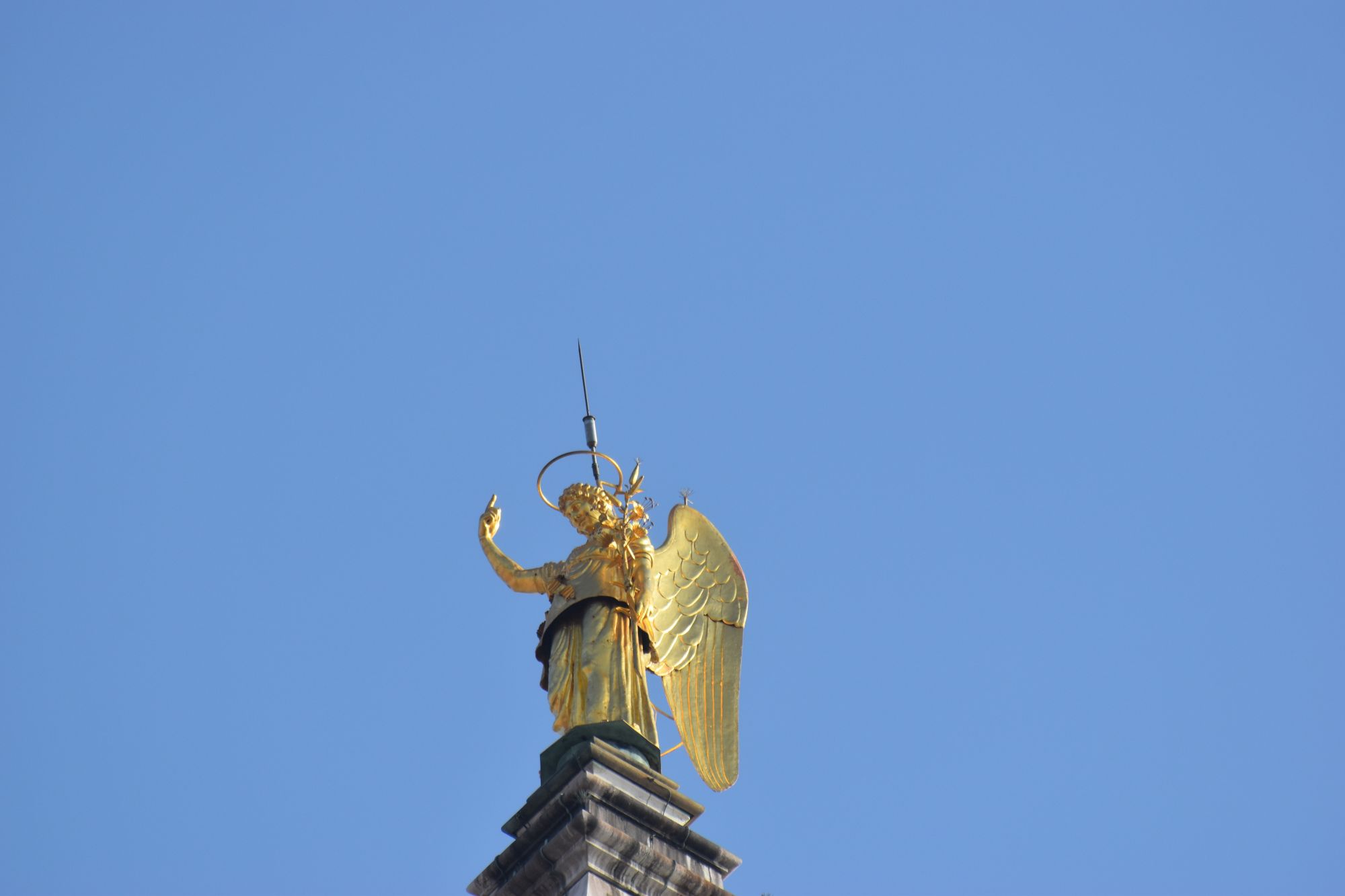 In the past at the footsteps of the tower you could find some stands with wine and food, which were quite typical of everyday life in Venice.
In the Venetian dialect they used to say, as they still say nowadays: “Let’s go for a shadow”, meaning “Let’s go for a glass of wine in the shadow of the Bell Tower”. The glass of wine would be drunk always in the shadow, since the simple stands would be constantly moved around, following the shadow cast by the tower itself, as to prevent the wine from becoming too warm in the heat. In 1872 these stands were removed by order of the local authorities. The Venetians, nonetheless, keep meeting to share and enjoy a shadow in cheerful company in the typical bacari, small inns scattered all throughout the city.

Short history of the tower and its collapse

When it was at first built, St. Mark’s Bell Tower was used as a light house and as a watching tower. It was started in the 9th century, under Doge Pietro Tribuno. Over the centuries it underwent several restorations, due to earthquakes, fires and lightning.
On July 14th, 1902 the Bell Tower collapsed, leaving eventually a huge amount of ruins on the spot where it once stood. However, no one was killed or even injured. The city lost one of its most relevant landmarks. It was immediately decided to rebuild it exactly how it was and where it was, and in March 1912 it was finished.


The view from the belfry, in the past and today

In 1609 Galileo Galilei climbed up to the top of the highest tower in Venice to give a demonstration of his telescope. 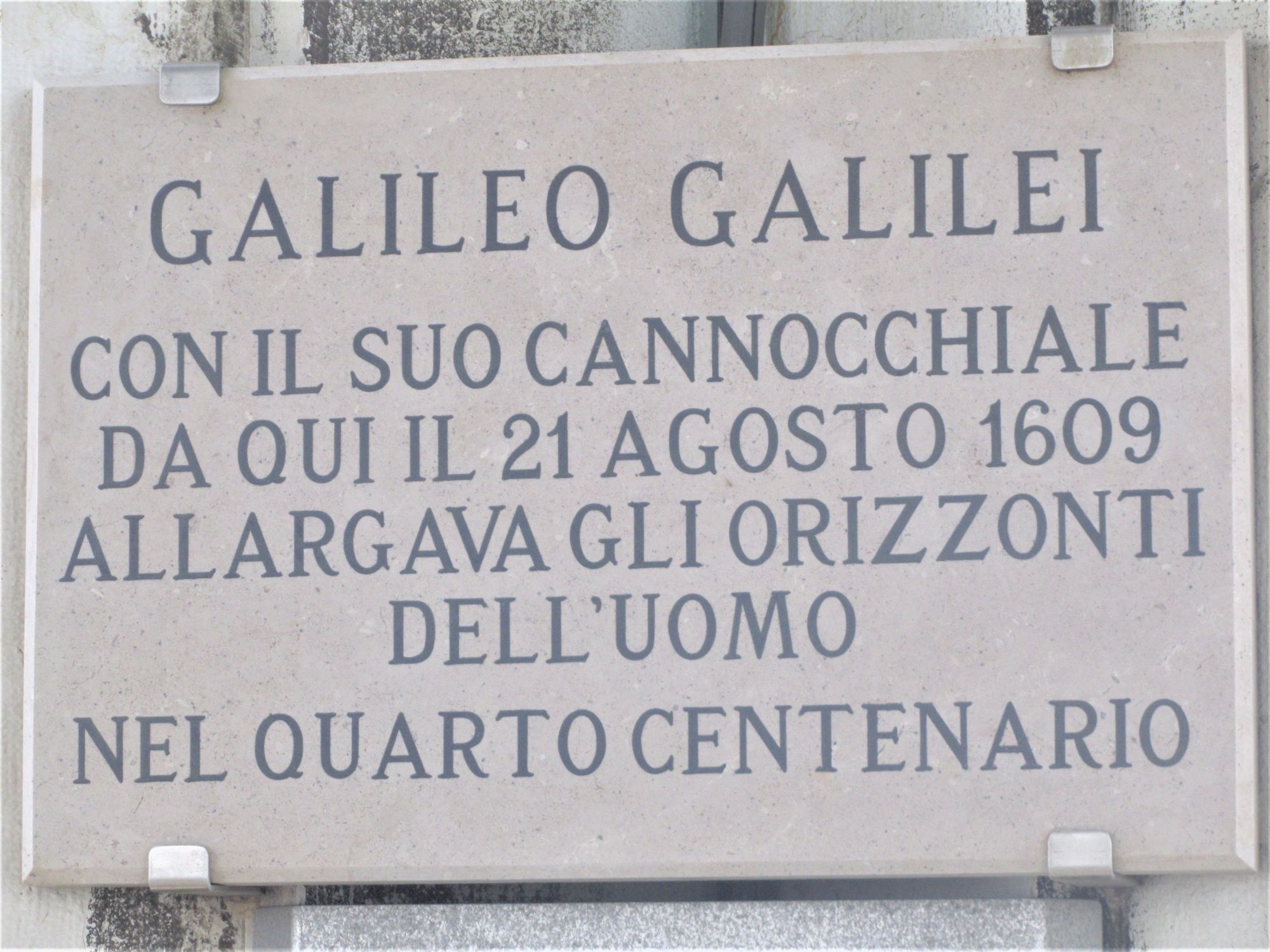 In September 1786 Wolfgang Goethe had the chance to spend some time in the belfry, and in his book “Travel in Italy” he described how he could distinguish from up there both close and faraway places, in the continuous sparkling of the sun at noon, reflected by the water… and when he looked towards the Lido island, he could admire the sea for the first time in his life!
Today we use the elevator to go up to the top and enjoy a stunning 360 degree view of Venice and its Lagoon.
We invite you to join us, so that we can help you notice details that might be not so evident. 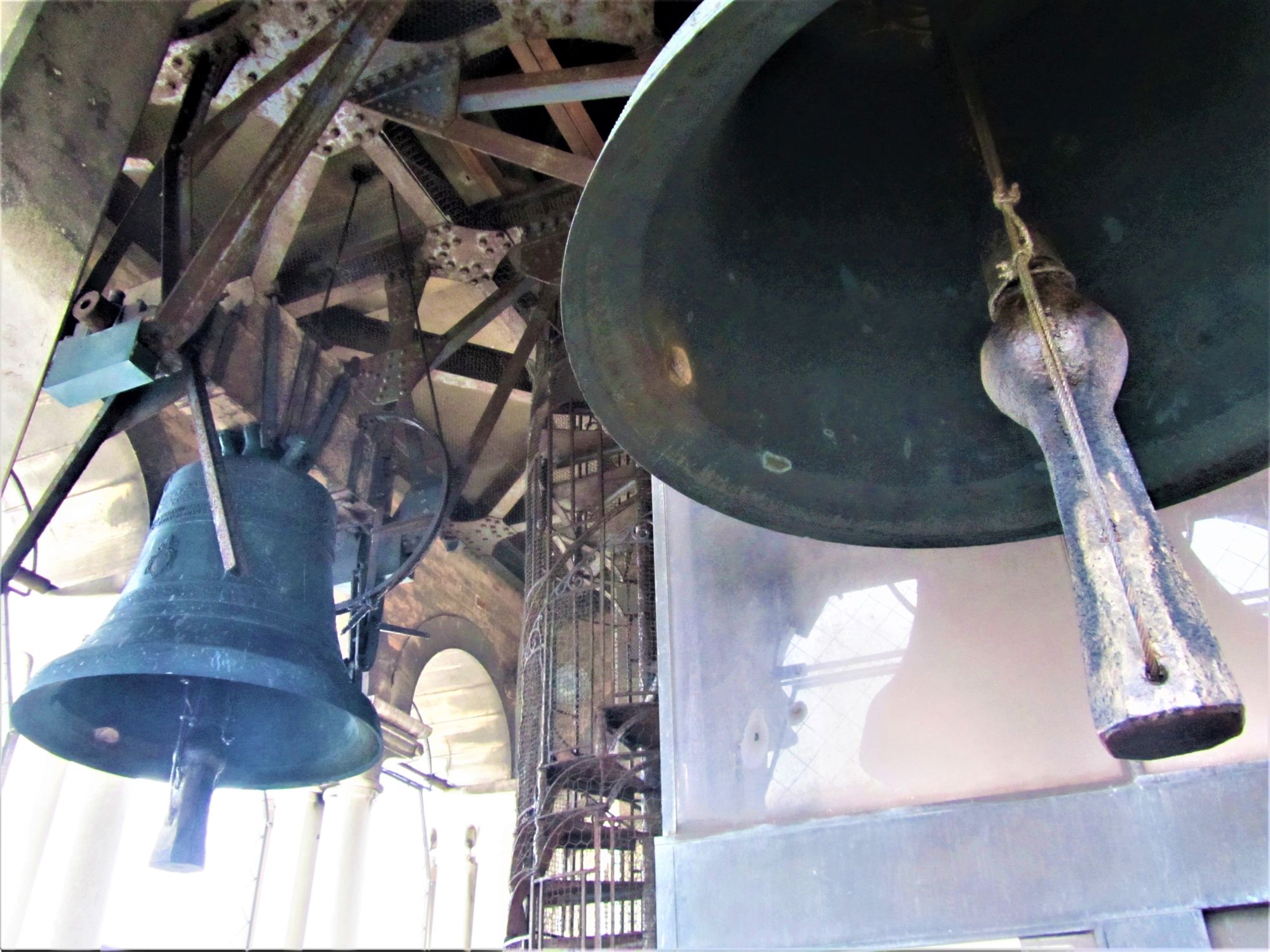 See you soon on top of the Bell Tower!
Contacts: info@guidedtoursinvenice.com

A guided tour in Venice: the two columns in St.Mark's Square

Saint Mark's basilica in Venice: the mosaics on the facade

Have you ever seen Venice from above?

Venice carnival: the flight of the Angel from the bell tower (YouTube) 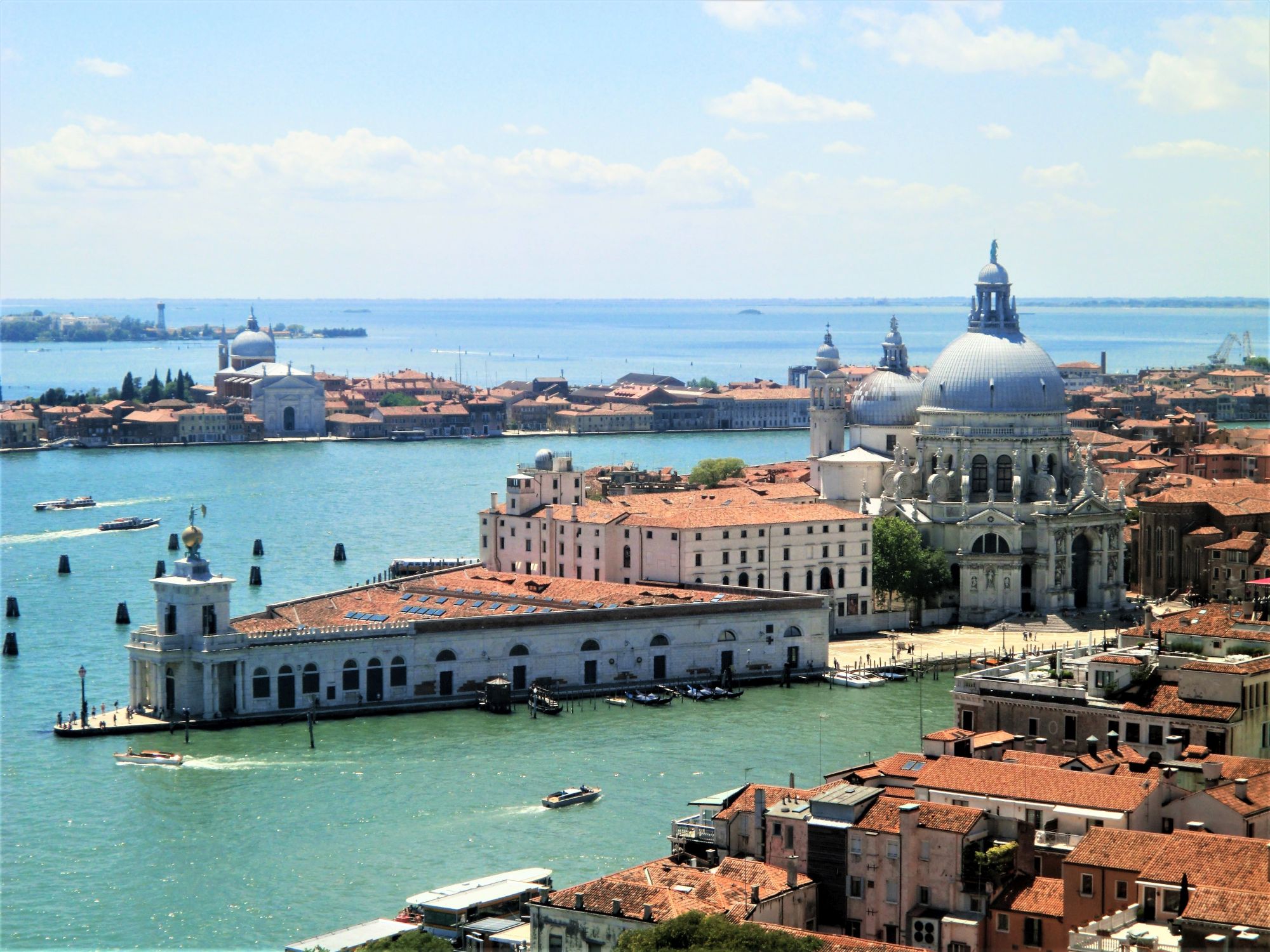