The Nativity by Tintoretto inside the Scuola Grande di San Rocco

Nativity scenes have been quite frequently represented in paintings of the Christian World, in particular in the past centuries, but we can find interesting examples of this subject even in modern and contemporary art.

In this post we would like to focus on two canvases, representing Nativity, painted by Jacopo Tintoretto for the Scuola Grande di San Rocco (below the facade of it). 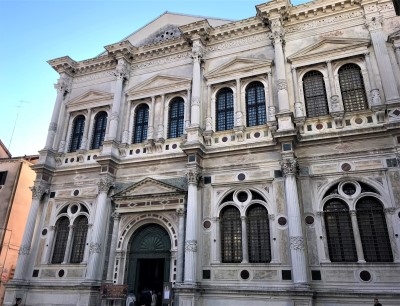 After finishing the decoration of the Hostel Room in between 1654 and 1567, in 1576 Jacopo Robusti started to paint his famous canvases for the Chapter Hall, where all the members of the Brotherhood would meet to discuss all the issues that concerned their activity. 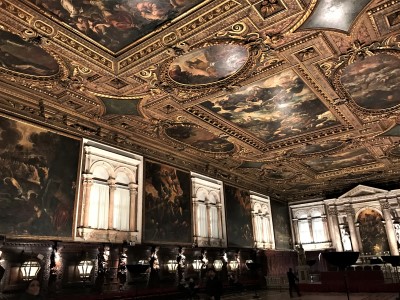 On the ceiling we can admire paintings representing subjects from the Old Testament, whereas on the walls the subjects of the canvases refer to episodes of theNew Testament. It would be quite interesting to describe the peculiar correspondences that relate the paintings on the ceiling with those on the walls, but we promise to write one entire article on this. 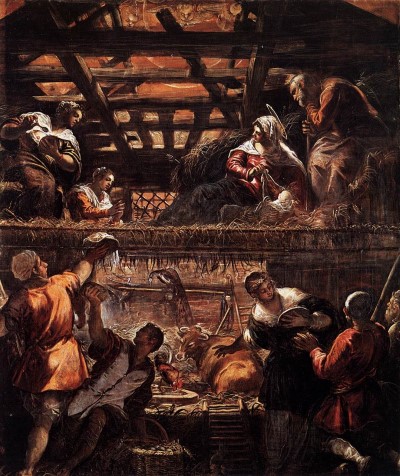 The stable, or barn, where the scene takes place, is divided into two parts. It is characterized by continuous contrasts between shades and warm golden light, which, passing through the beams of the ceiling, hits figures and objects. In the lower part two shepherds, represented from the back, frame the scene. Next to the one on the right, who wears red clothes, Tintoretto represents a character in profile: could it be a self portrait of the painter himself, which he would frequently paint? Probably not, the figure does not quite look like Tintoretto. 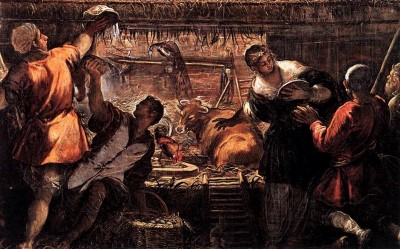 The lower part of the painting 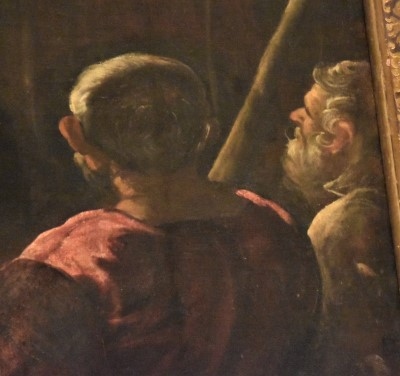 The figure on the right

In the middle we find the ox in full light, turning his head towards the viewer. Although only few figures are present, there is quite a lot of movement in the scene: some of the figures raise their hands, some others twist their bodies, the animals are represented in different poses. The light plays also with the colors. The red crest of the rooster, the shepherd’s red clothes, the red nipple of the lady on the higher part, the red clothes of the Holy Mary herself: although these seem to be random brushstrokes, they actually create some sort of chromatic unity in the painting. 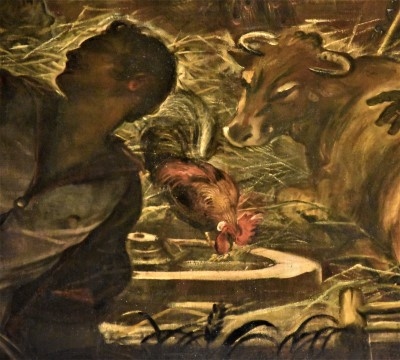 On the higher level the Holy Family is surrounded by some intense, bright, almost white, light, which is concentrated mainly on the head of Baby Jesus, on Mary’s shoulders and on the female figure underneath. 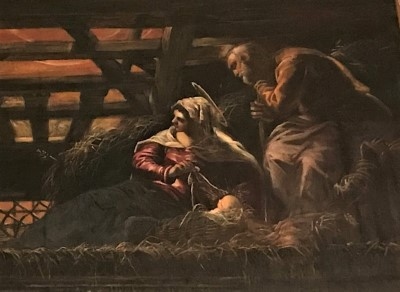 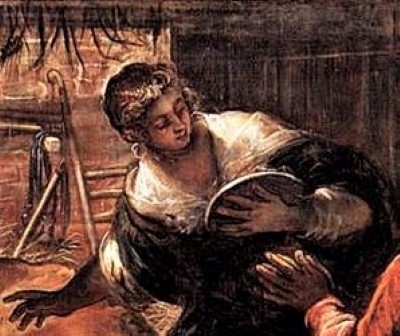 Female Figure on the lower level

Light and colors are the real main characters of the painting, they are more important than all the other details: chromatic unity seems to be what Tintoretto is really looking for (see, for example, the fluorescent straw which reflects the light cast by the cherubs from beyond the wooden beams of the ceiling). 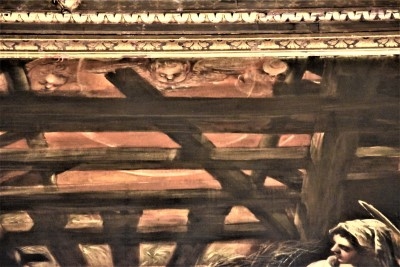 The cherubs and the wooden beams 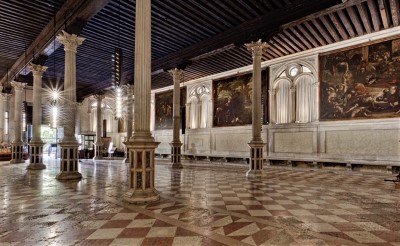 The Hall on the ground floor 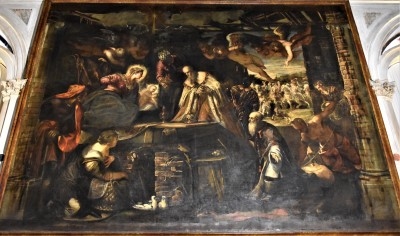 The Adoration of the Magi, Tintoretto, 1582, Hall on the ground floor of the Scuola Grande di San Rocco

The scene is framed by two brick columns, which give the impression as if everything was taking place on a stage. The environment is quite humble: simple wooden boards are supported by small brick columns, the hut has no roof, the figures represent mainly country people.

The Magi enter the scene from the right; the procession casts some sort of fluorescent light on the Holy Family that receives the gifts. 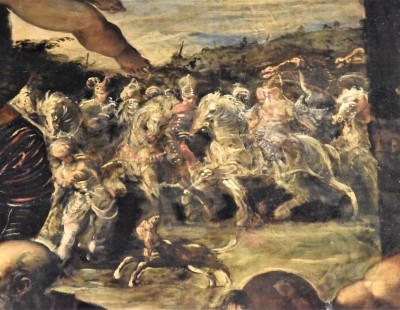 The Procession of the Magi

These figures are painted with quick brushstrokes, they seem to have no plasticity: this is the way the master uses to create the perspective depth that is necessary as a background for the main scene on the foreground. The black slave, standing in the middle, separates the scene from the explosion of colors on the right. 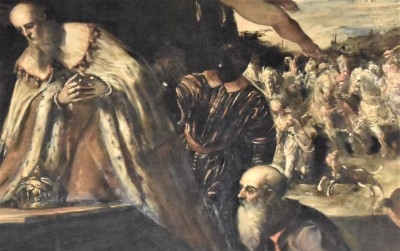 Baby Jesus in full light reaches out his hands to receive the gifts, while Mary and Josef focus their gaze on him. On their right the Magi are painted on different levels: one is on his knees, another one on the boards, the third bends forward. The scene has a pyramidal structure, with the star shining on its tip, perpendicular to the Baby’s head. 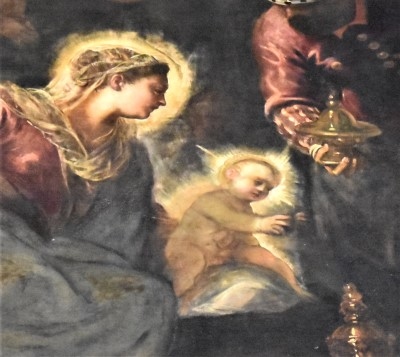 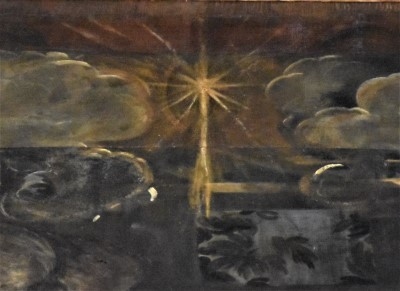 The light, coming from the opposite direction, hits the humble lady down on her knees, the two doves, Mary’s face and two of the Magi. There are two main sources of light: the one on the procession, and the one that pervades the space where the scene takes place. Here we can witness the experiments that Tintoretto used to carry out in his workshop: he would hang figures made out of cardboard on the ceiling and then place candles in various places, which would cast light on the figures from different positions, thus creating particular light and shade effects. His chromatic use of light reaches, in this canvas and on other paintings of the ground floor, the highest results.

With this little taste of two of Tintoretto’s major works of art we would like to wish you a Merry Christmas. We are looking forward to seeing you to take you on aguided tour of Venice, to unveil for you more details of Tintoretto’s masterpieces. Tintoretto himself says now goodbye from the Chapter Hall of Scuola Grande di San Rocco: here is his marvelous portrait carved in wood by the Baroque sculptor Francesco Pianta. 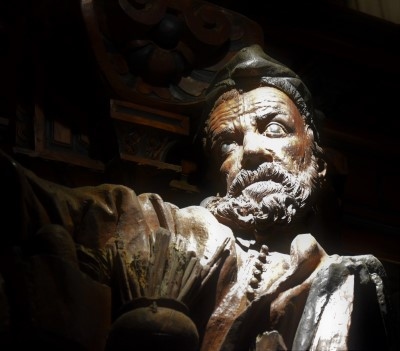