Have you ever seen Venice from above???

The Bell Tower in St. Mark's square is one of the best known symbols of Venice.
Its stately structure dominates the center of the city. From some secret corners, from one particular bridge, from a campiello of the hidden Venice, you can sight the "landlord": this is how the Venetians affectionately call the tallest bell tower in town.
In the summer, when the sky is clear, or during fall, when the tower is surrounded by the fog, in every season, at every hour from dawn to sunset, thousands of tourists try to get the best shot of the entire tower in its magnificence, or of some of its details.

But from the top of the Bell Tower? What do tourists see from up there?
By using the internal elevator, tourists can reach the belfry and admire a 360 degree view of the whole city and its Lagoon, as well as of the Adriatic Sea and of the Italian Dolomites, when the sky is really clear.
If we start to look South, we immediately see St. George's Island, with its amazing Basilica, projected by Andrea Palladio, its bell tower (somehow similar to St. Mark's bell tower), its unique cloisters and gardens, its impressive labyrinth.
Far away in the distance, we can distinguish the 12 kilometer long Lido Island, which separates the Lagoon from the open sea. This is the place where every year, at the end of August and beginning of September, the famous Movie Festival takes place, among beaches, Liberty styled buildings, parks and even  a golf field. It is a little piece of paradise in the Lagoon.

If we continue our gaze counterclockwise, we can notice the Gardens, created by order of Napoleon, quite popular for being the main area of the Biennale, the international exhibit of contemporary art: here different countries have their own pavilions where numerous artists display their works of art. These Gardens are an unusually large green area in this city, ideal for walking, jogging, resting in the shade, walking dogs, which the Venetians are so fond of. 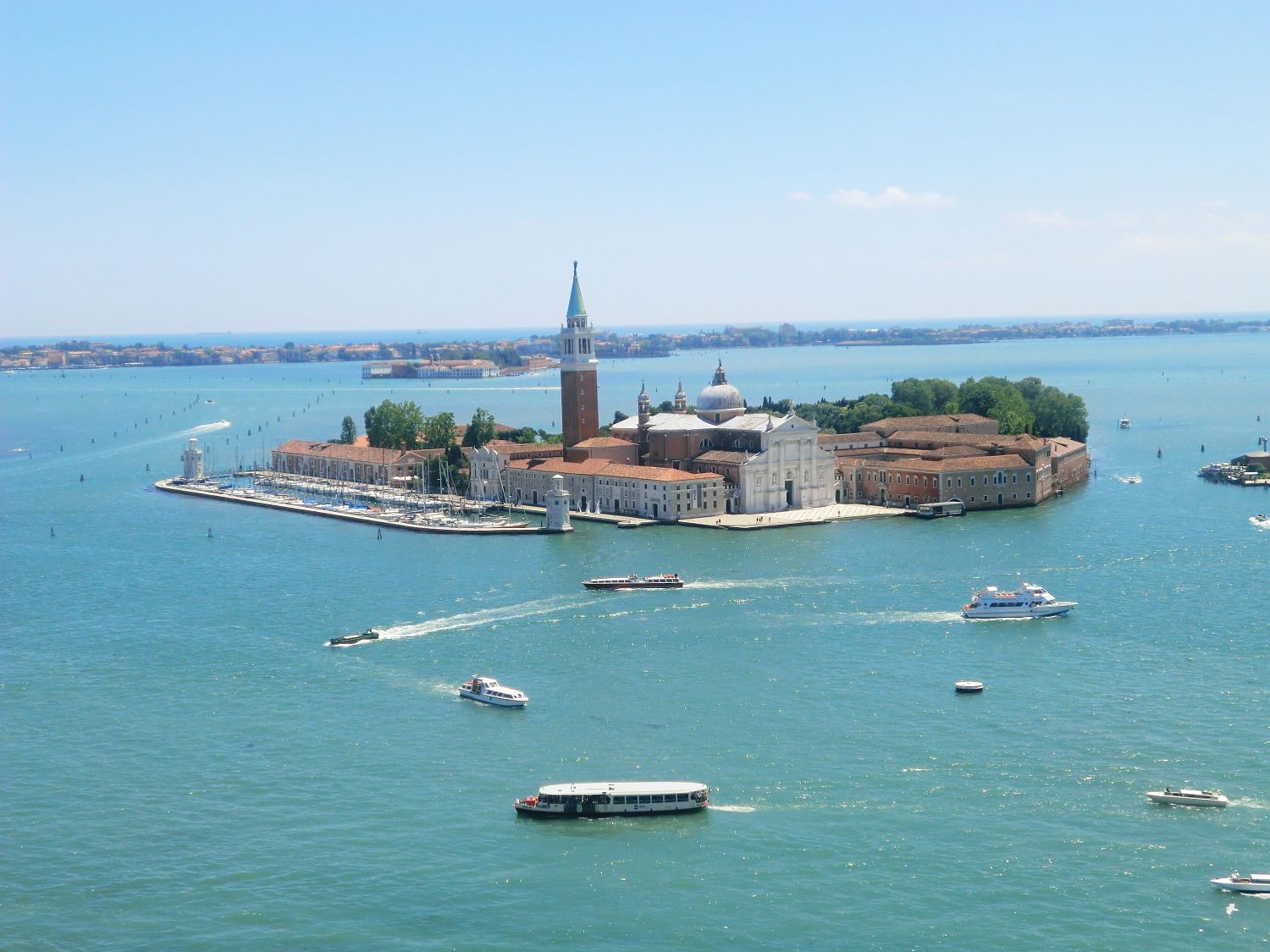 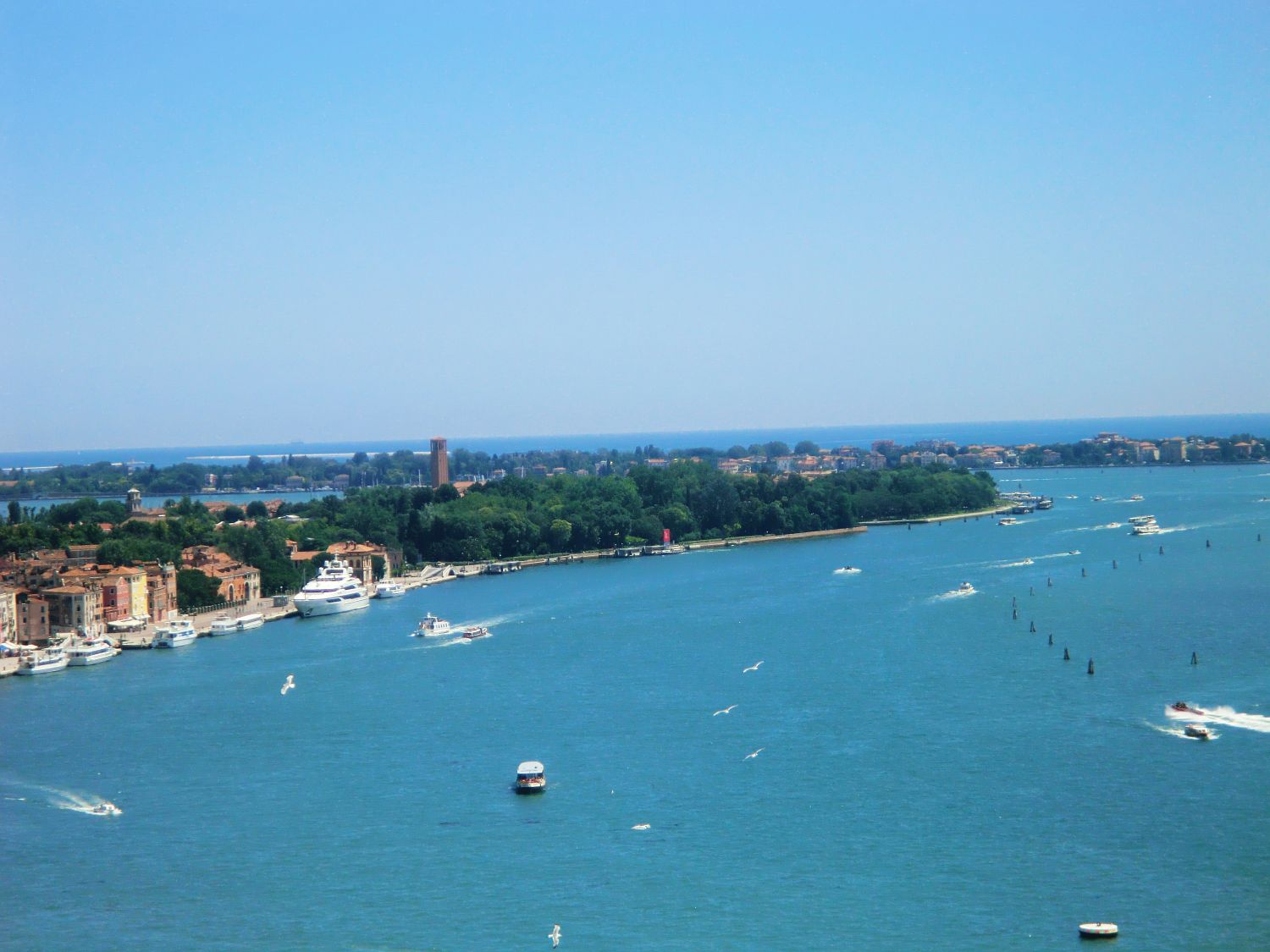 Further to the left stands in its magnificence the Doges' Palace, the seat of the Venetian Government and of the Tribunals of the Republic, in an original Venetian Gothic style (as you come down from the tower, the Palace definitely deserves a visit!). Its lace-looking façade is quite unusual: a series of ogee arcades supports the solid wall of the upper part, thus giving to the whole structure an impression of extreme lightness, which definitely matches the particular atmosphere of the Lagoon.

Next to the palace, the five grey domes and the loggia of St. Mark's Basilica, which used to be the private chapel of the Doges, seem to invite all guests to enter the most marvelous religious building in town, as to continue admiring the colorful marbles and the magnificent mosaics of the interior, a taste of which is already visible from the outside.
In front of the lateral façade of the Doges' Palace, we can see the Piazzetta, with its relevant monolithic columns of St. Mark and of St. Theodore: it was right in between these two columns that the Venetians would execute those who were sentenced to death... No wonder passing or standing in this very spot would be considered of bad omen... By the way, how was it possible in ancient times to set these gigantic columns in the upright position? 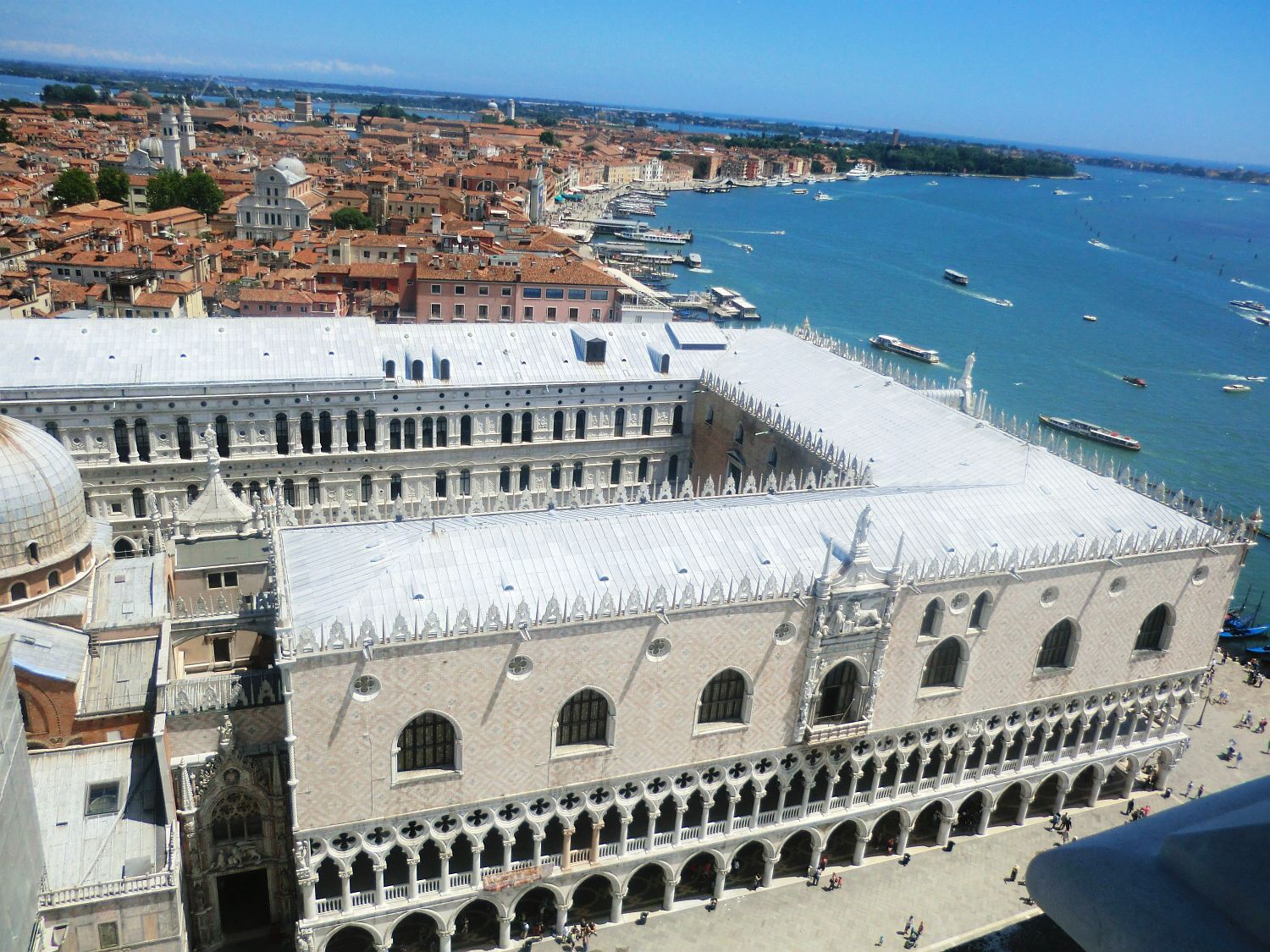 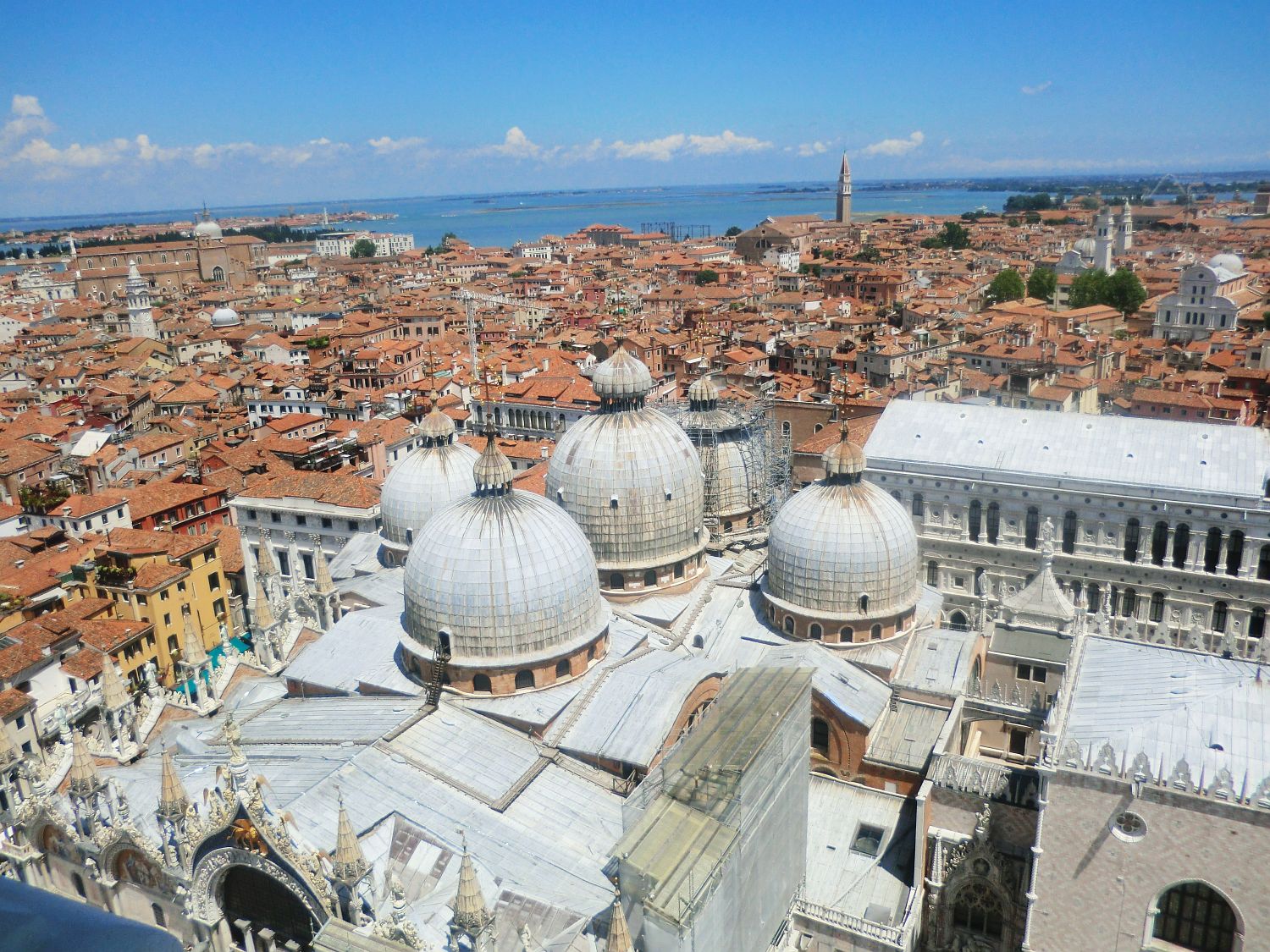 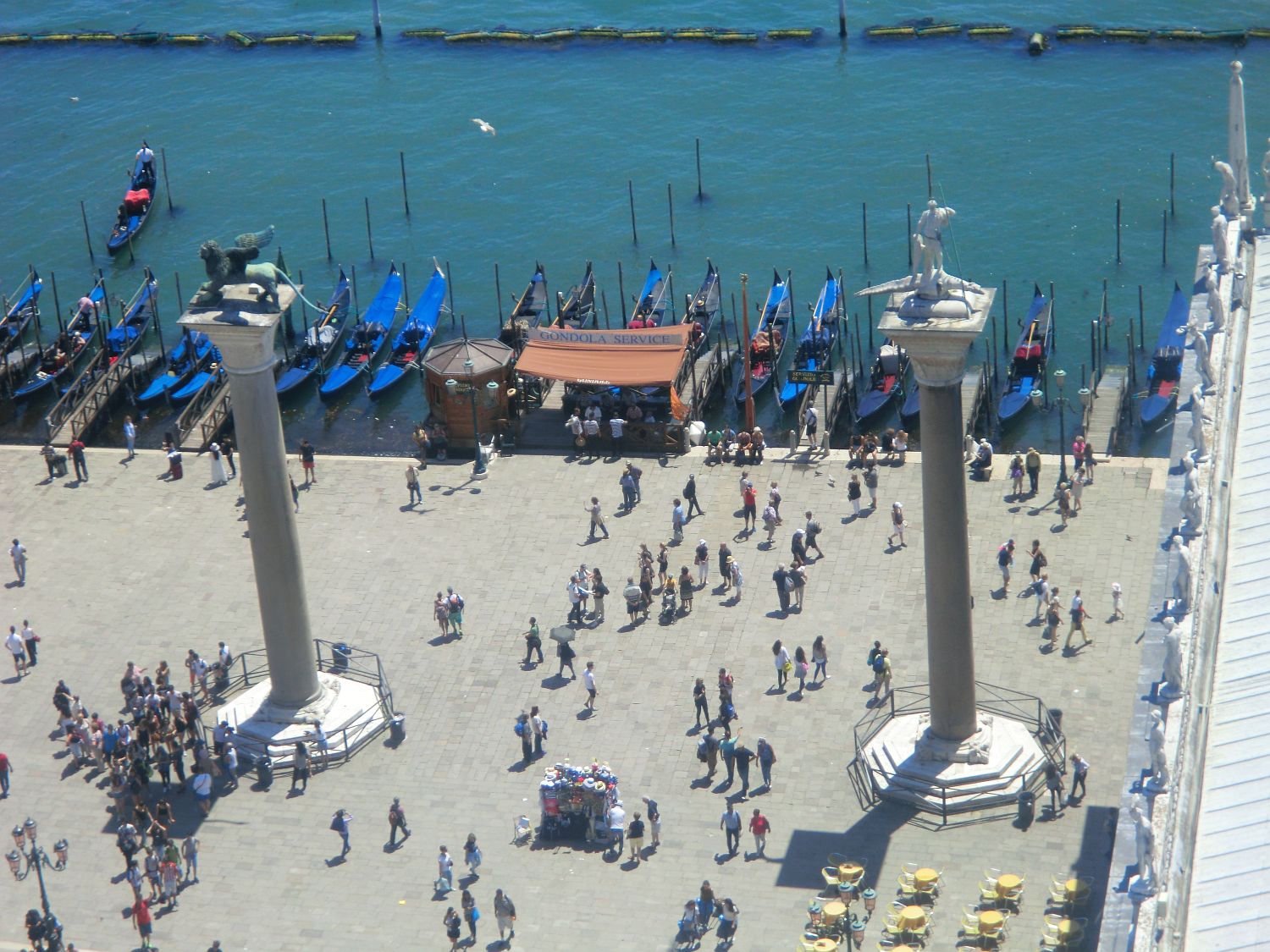 Then our gaze is magnetically caught by the Clock Tower, a wonderful Renaissance structure, another highlight of this city, with the two moors on top hitting the bell every hour. The two three-meter-tall statues are different: one has a beard, whereas the other one doesn't... They thus become the symbols of past time and future time. Underneath the two moors is the winged lion, holding the open book, in sign of peace. The sculpture representing the Holy Mary with Baby Jesus is placed a little lower, between the numbers that indicate the hour and the minutes. The striking element, though, is the astrological clock, with its signs of the Zodiac, the Earth in the center, and the moon, half golden and half blue, to mark the moon phases. 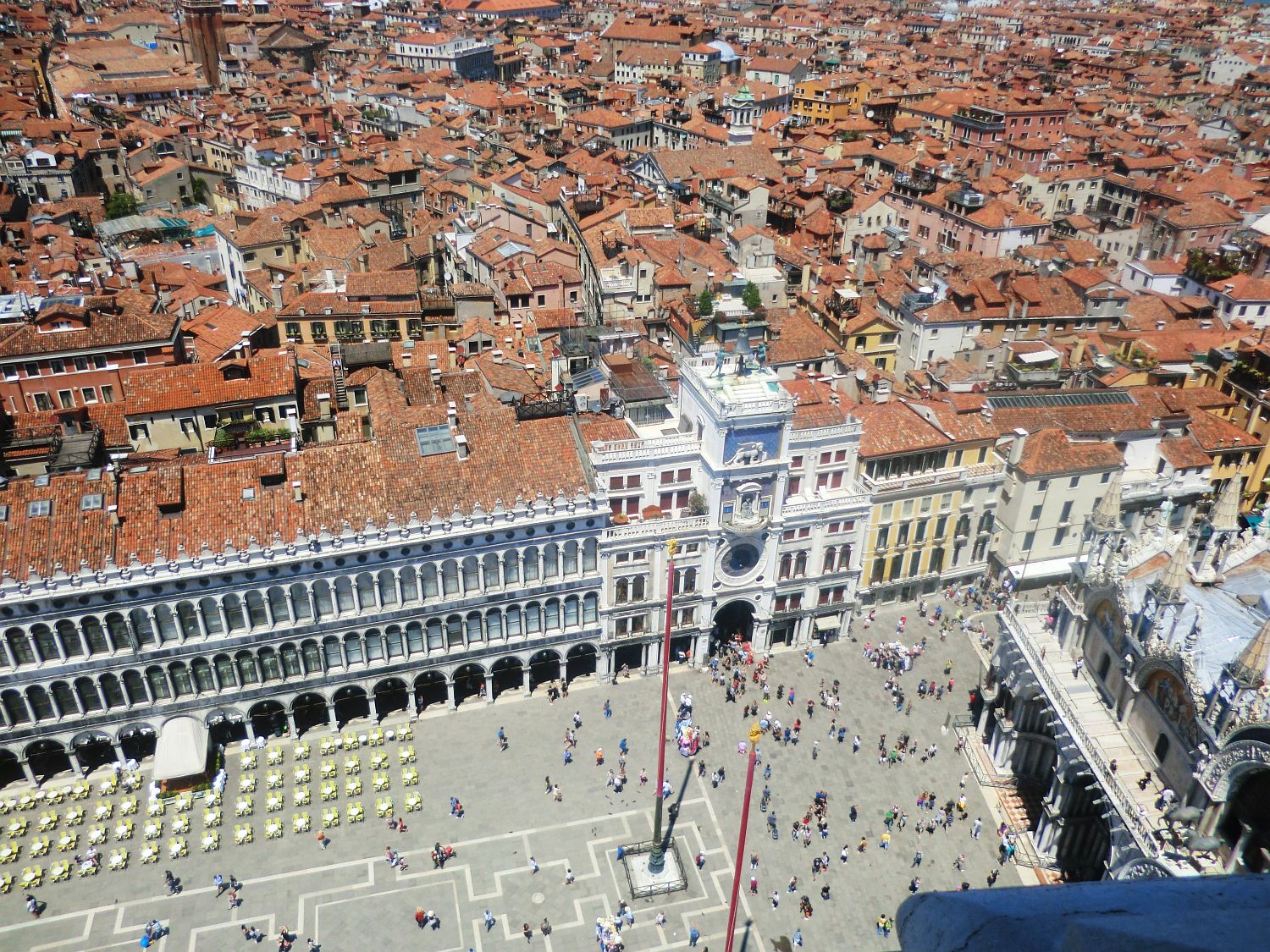 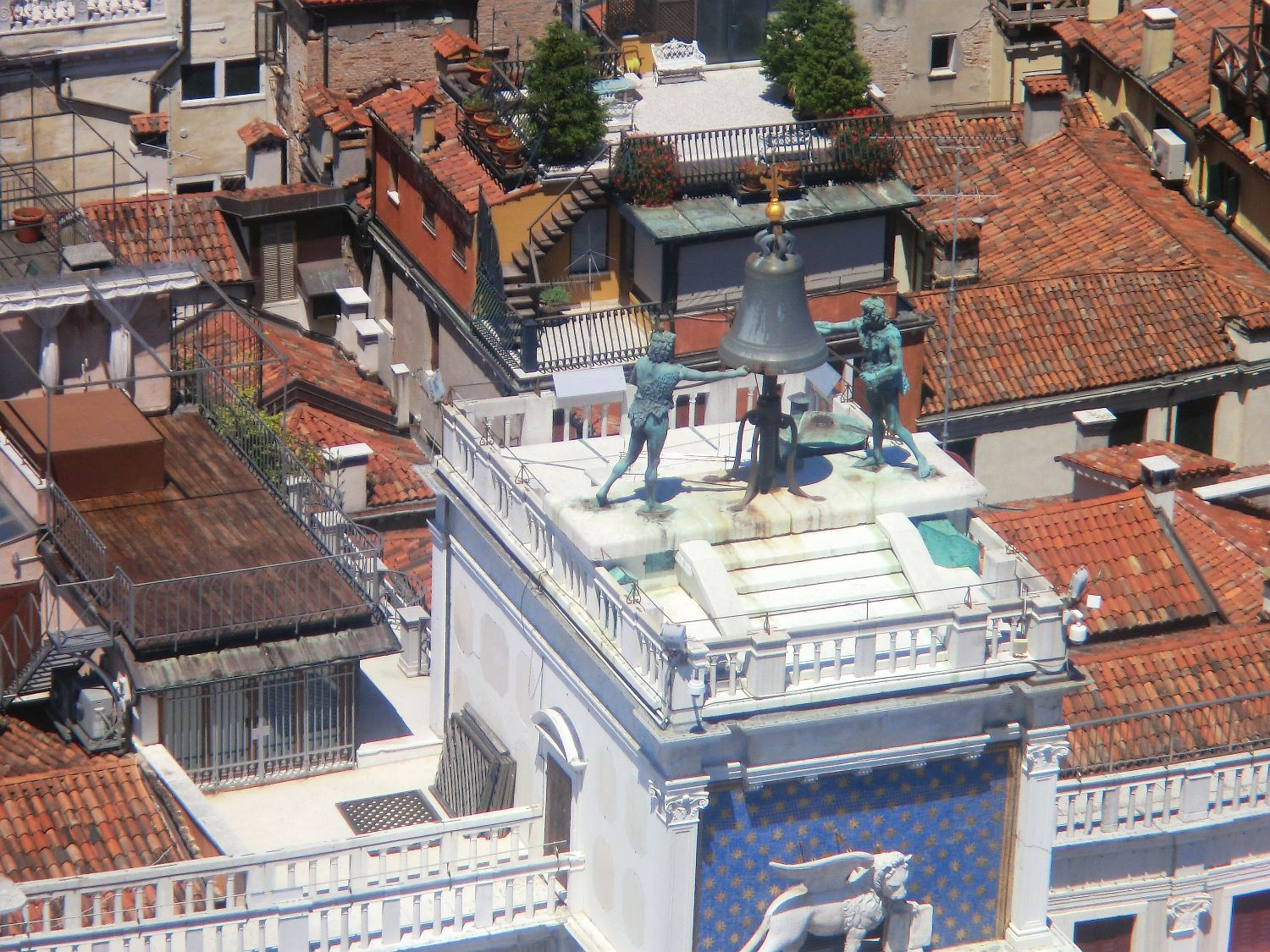 Our position is perfect also to see the rooves of the houses and of the Venetian palazzos with their altane, the numerous bell towers, the frequent façades decorated with Istria stone. And we definitely start feeling the desire of walking along the very narrow alleys, of getting lost in this labyrinth in order to discover the treasures of this hidden Venice, its most secret and surprising corners... 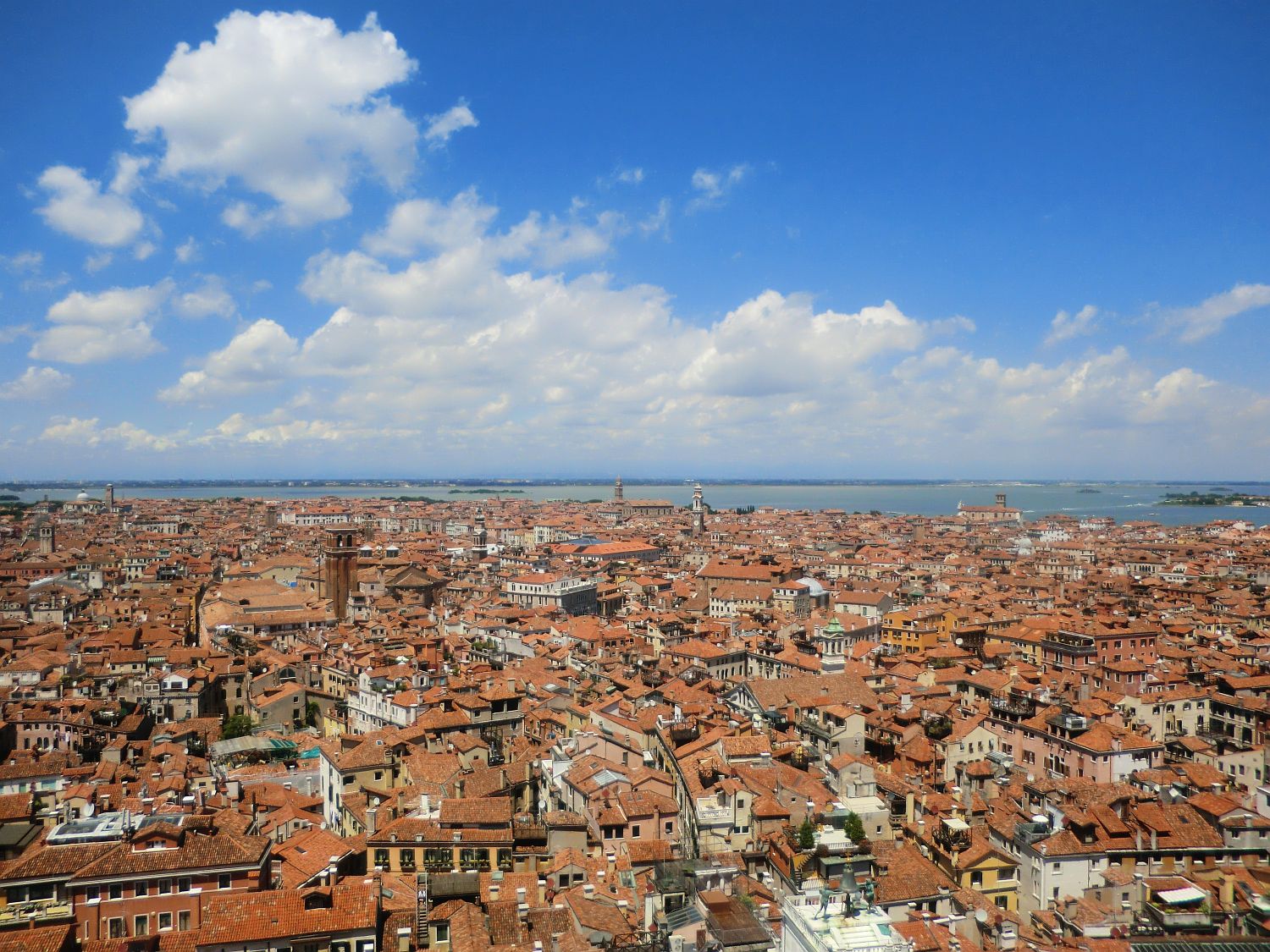 And we sure need to spot the unique Scala Contarini del Bovolo, a marvelous external staircase, with its snail-like, spiral structure (bovolo in Venetian means snail). It was built with the aim of embellishing the rear of the palazzo of the Contarini family, one of the most important and famous Venetian noble families. It is now possible to visit the staircase: it has been recently reopened to the public, after an accurate restoration. 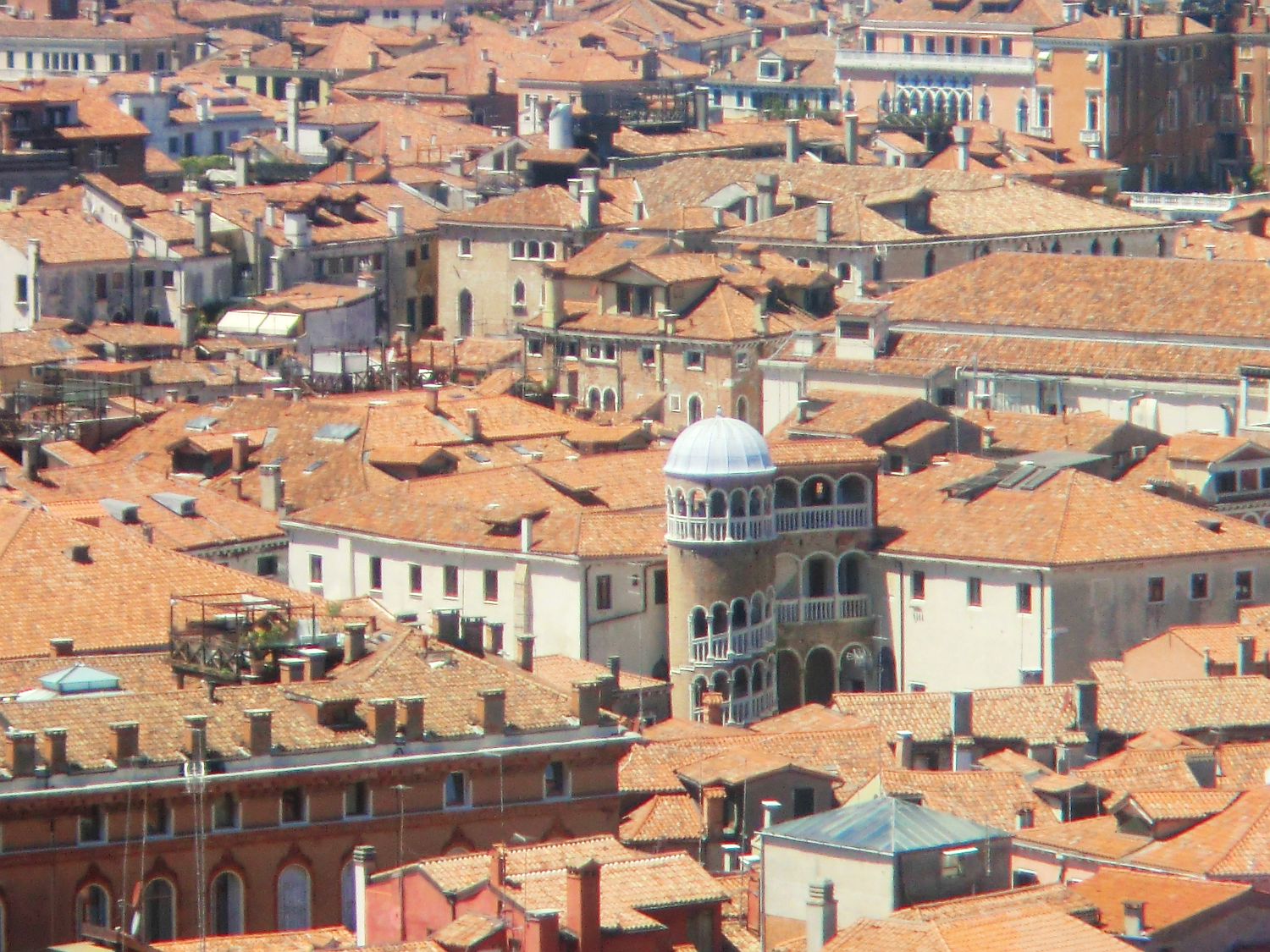 St. Mark's Square is the only square in Venice (all the other ones are called campo or campiello, i.e. fields). Napoleon referred to the square as the finest living room in Europe. It is flanked by long buildings, the procuratie, and closed on one side by the Basilica, on the other by Museum Correr, a structure build under the French domination. The square hosts the most famous cafés in town, where fine orchestras frequently play, and where tourists enjoy sitting, listening to music and sipping fresh drinks in the summer and hot chocolate in the winter. But have you ever seen the square entirely flooded? Or full of masks during the Carnival? Totally different atmospheres... 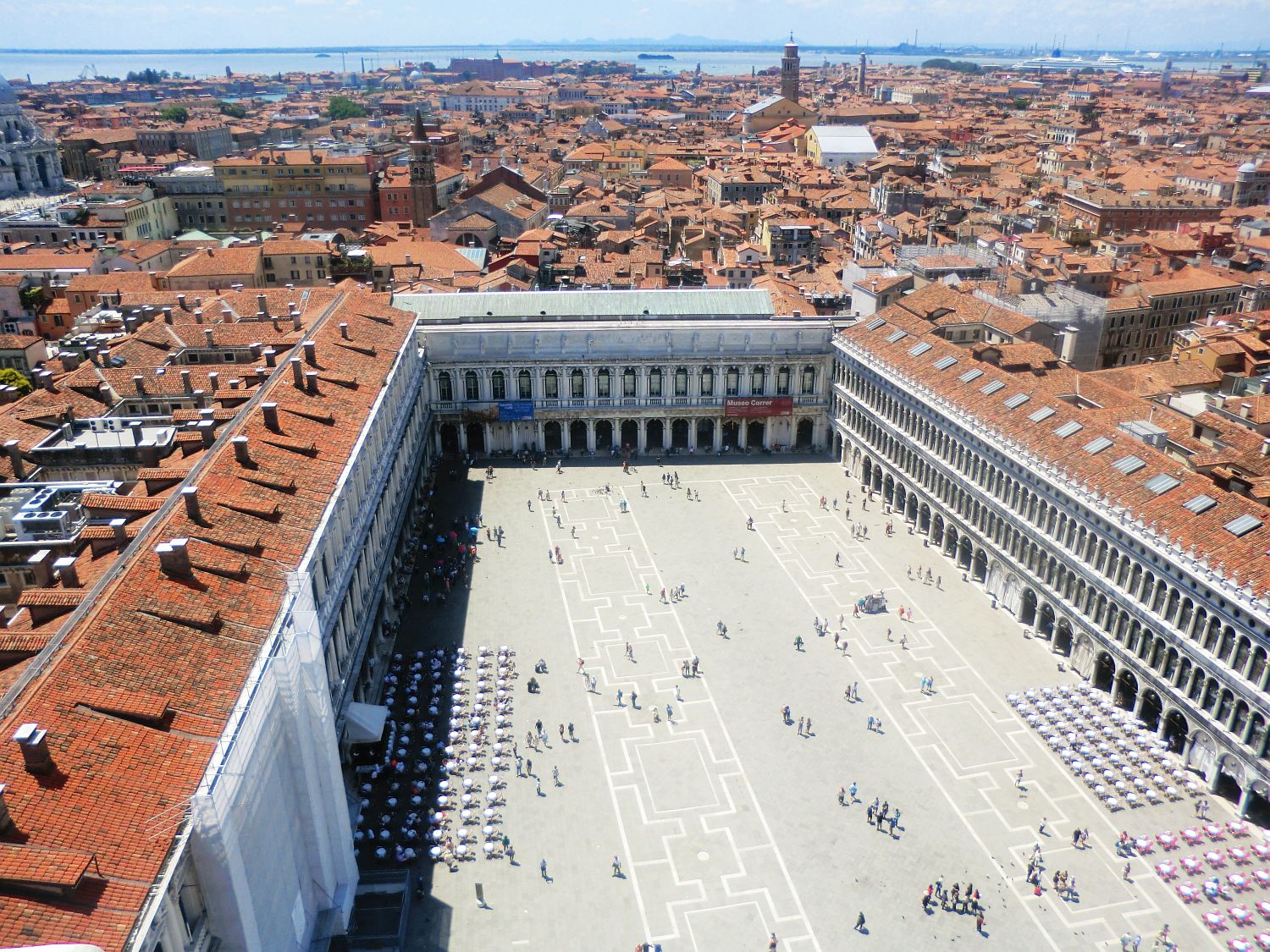 From the top of the tower we can see an incredible number of churches. Two of them, though, have something in common: both the Redentore and Santa Maria della Salute were built at the end of two terrible epidemics of plague that affected the Republic. Still nowadays we celebrate two special feasts, that are related to these churches: on the third Sunday in July we commemorate the Redeemer in the Feast of the Redentore, while on the 21st of November we walk on a "pilgrimage" to the Salute church. On both occasions, floating bridges are built, respectively on the Giudecca Canal and on the Grand Canal, to let the worshippers reach these churches on foot. Their styles are completely different: the Redentore is a Renaissance church by architect Palladio, while the Salute is a special Baroque structure projected by architect Longhena. Wouldn't it be neat to visit them inside? 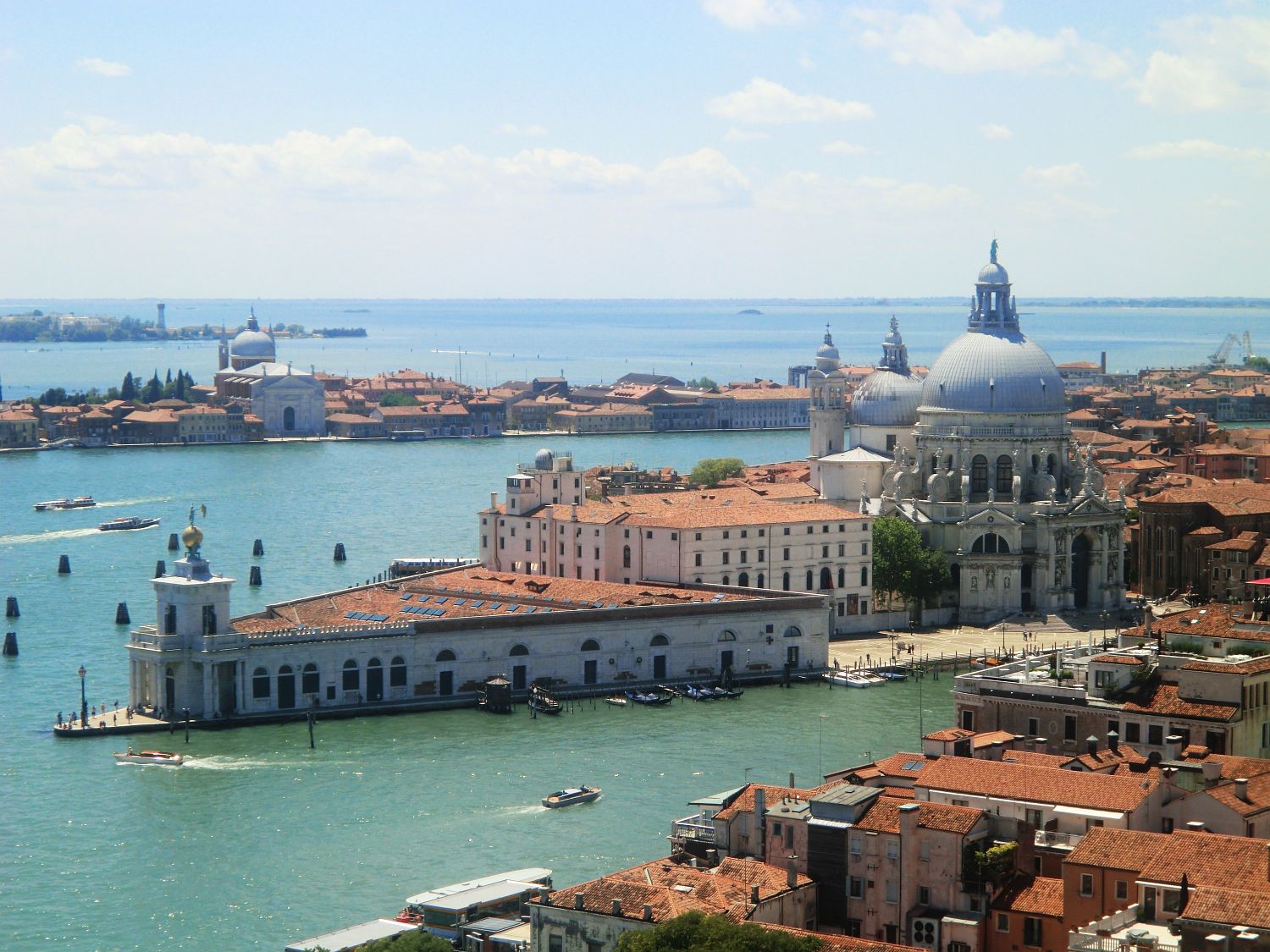 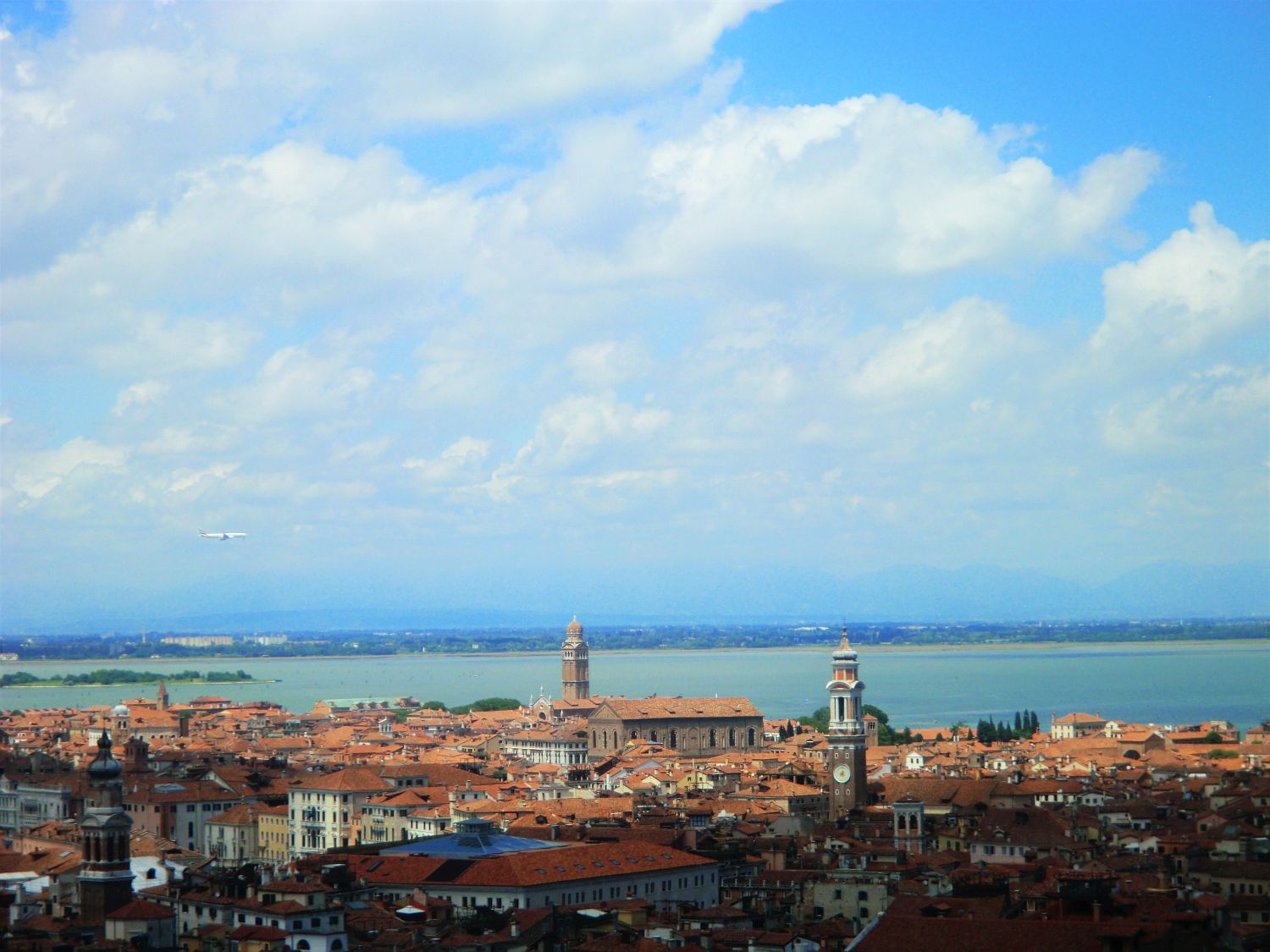 We provided you in this post with just some hints of what you can admire from the belfry of St. Mark's Bell Tower. If you feel you would like to get more information, to hear the stories of what you see, to come along and discover the secret corners of Venice... Here we are, waiting for you! Is that your airplane landing? You're already here, then! We are ready! Let's go!