Guided tour in Venice: the magnificence of Rialto Bridge

A must see in Venice

One of the symbols of Venice

The famous Rialto Bridge is one of the iconic spots in Venice, any tourist takes at least one picture of it. It looks quite imposing. For centuries it was the only bridge across the Grand Canal. 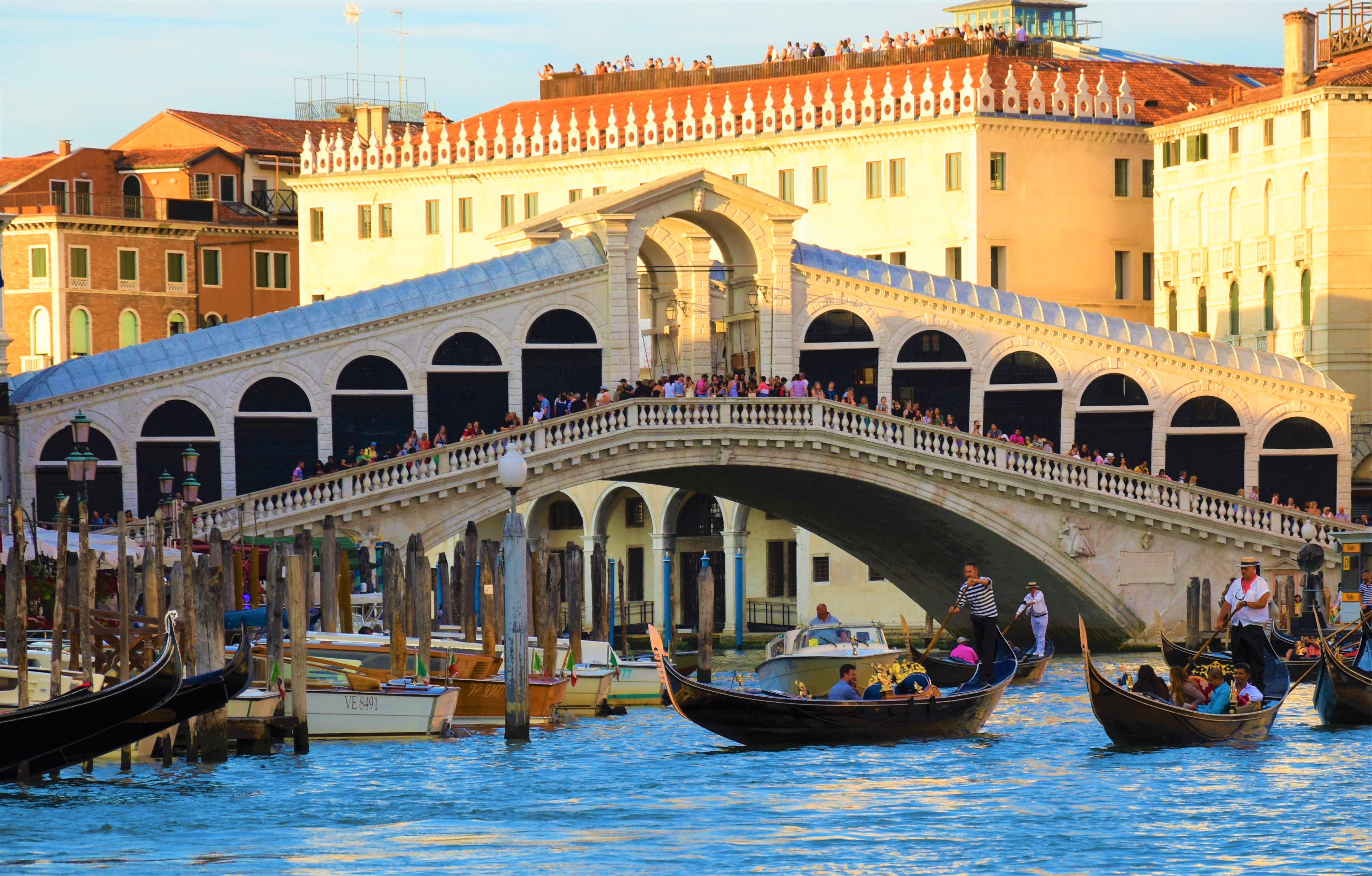 The place where this bridge was built is quite relevant from a historic point of view. In 810 Charles the Great’s son, Pepin the Short, left Ravenna, heading to the Venetian Lagoon, with the aim of conquering it. In those days, the seat of the government was located in Malamocco, but this site could not be easily defended from an attack. It was then decided to move the fore mentioned seat to a more internal place, on the islands of the area around Rivus Altus (a Latin phrase which means “deep canal” and which refers to the depth of the Grand Canal). This area eventually became the commercial heart of the Most Serene Republic.

History of the construction of the bridge

The history concerning the construction of this bridge is quite long.
It is probable that around 1181 there was a simple pontoon bridge, placed on top of boats, called the Coin Bridge, since those that wanted to cross it were supposed to pay a fixed fee, in coins. In 1255 a real wooden bridge was built, on top of palafittes. In 1310 Venice witnessed a dangerous conspiracy against the government: three aristocratic families, the Tiepolos, the Querinis and the Badoers, tried to overthrow the Republican system; however, they were not successful, and, escaping from St. Mark’s area towards San Polo District, the conspirators destroyed the bridge, to slow down the chasers.
The wooden bridge was then rebuilt soon afterwards, but in 1444 it collapsed: too many people had gathered on top of it, in order to admire the ceremonial parade of boats along the Grand Canal in honor the Marquise of Ferrara, the daughter of the King of Naples and of the Two Sicilies. Because of this accident, twenty people died! The wooden bridge was then reconstructed once again, but it was made larger, with shops on both sides. Moreover, it became a drawbridge, so that it could open up at the passage of sail ships, which could then easily reach the economic heart of the Republic. This was the period when it acquired its famous name, Rialto Bridge.

The Bridge in paintings

Looking at the marvelous masterpiece that Carpaccio painted for Scuola Grande di San Giovanni Evangelista in 1496, we can get a fairly good idea about the aspect of the Bridge in those days. 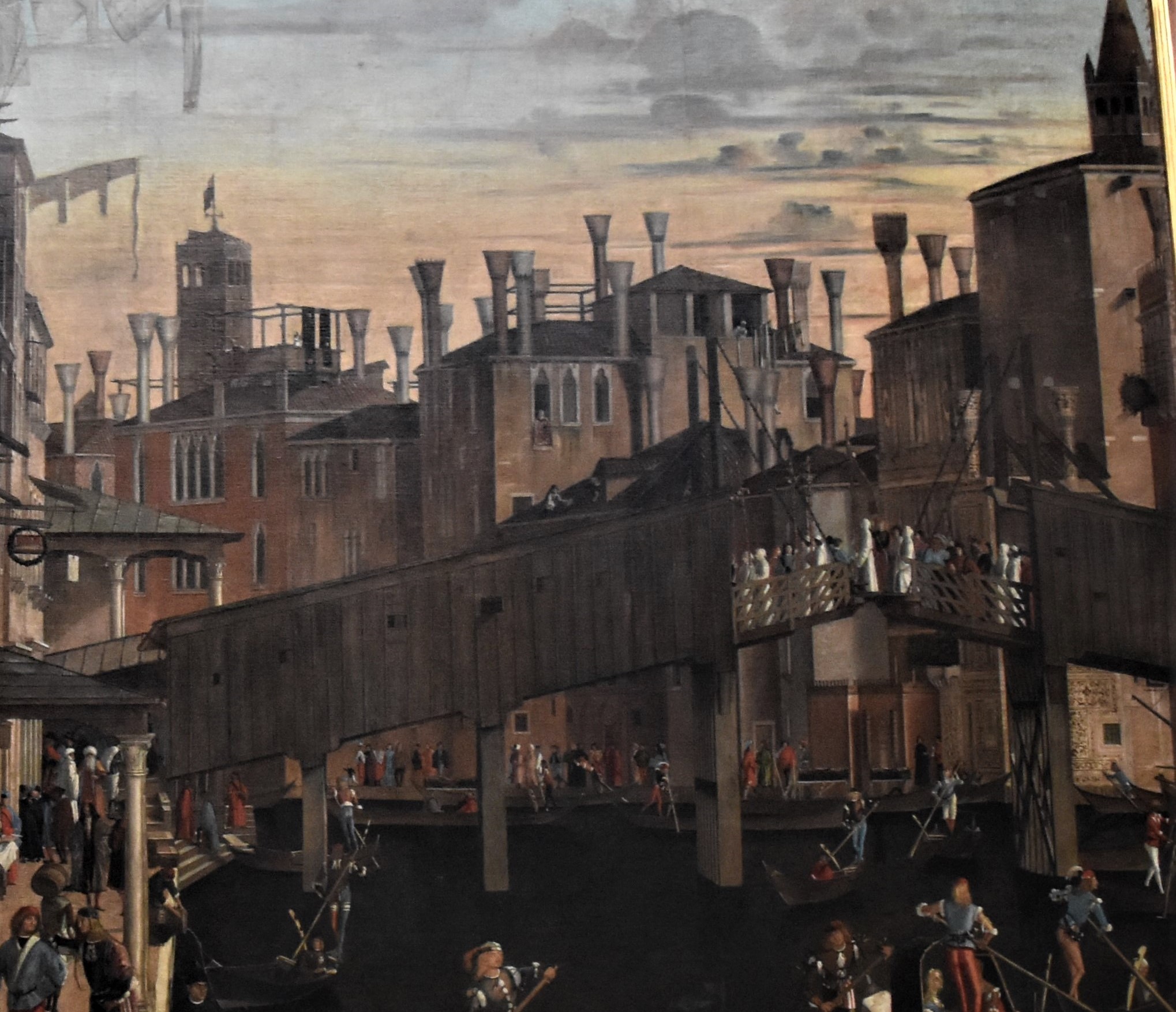 The Miracle of the Cross, by Carpaccio, 1496

A little later, also Jacopo de’ Barbari, in his “Bird’s Eye View of Venice” in 1500 represented the only Bridge across the Grand Canal, although in a very small scale. 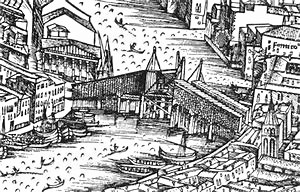 In one of Canaletto’s landscapes, “The Grand Canal seen from Ca’ Balbi”, that we can admire in Ca’ Rezzonico, a part of the Bridge can be seen in the background, but it is already the new version of the Bridge, the one built in stone. 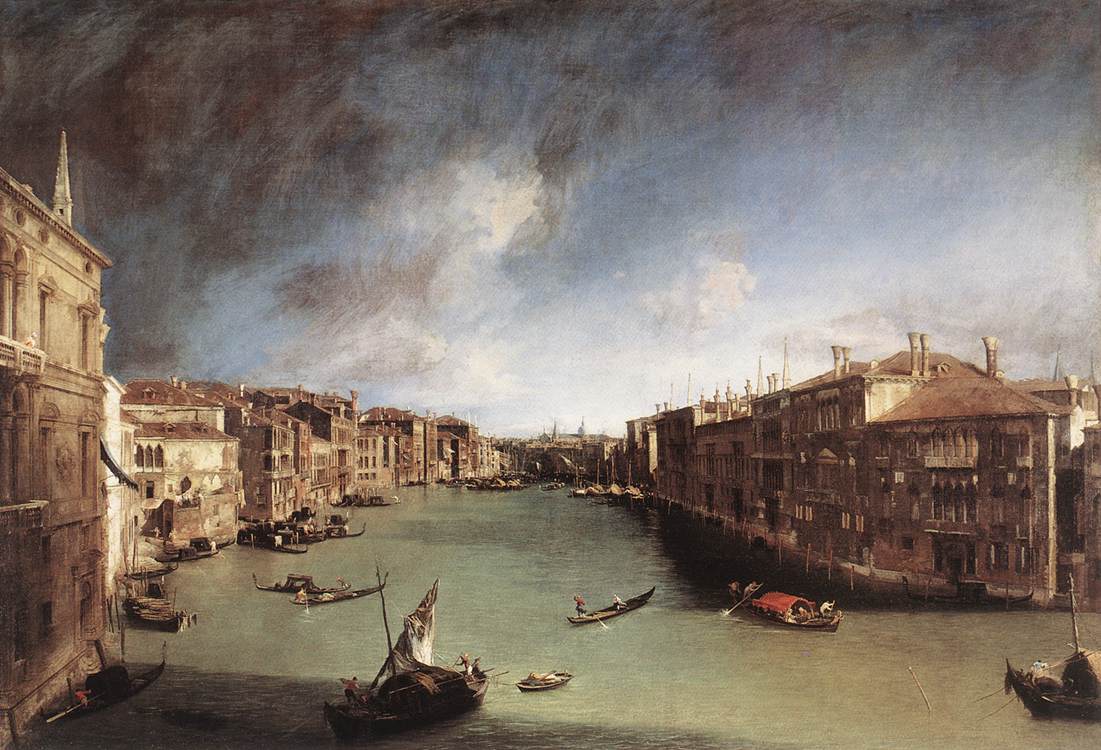 The Bridge that we can still admire today was started in 1588, when the Senate of the Republic decided to commission the new project to architect Antonio Da Ponte. More resistant materials were used for the new structure: bricks and white limestone. It was completed in 1591, and it appeared quite stunning to everyone; it consists of one single 28-meter-wide arch, with three staircases on top, its height reaches 7,5 meters, it hosts 24 small shops. It was necessary to drive something like 12,000 wooden piles into the ground with wide and thick wooden axes on top of them, in order to support the incredible weight of the structure. 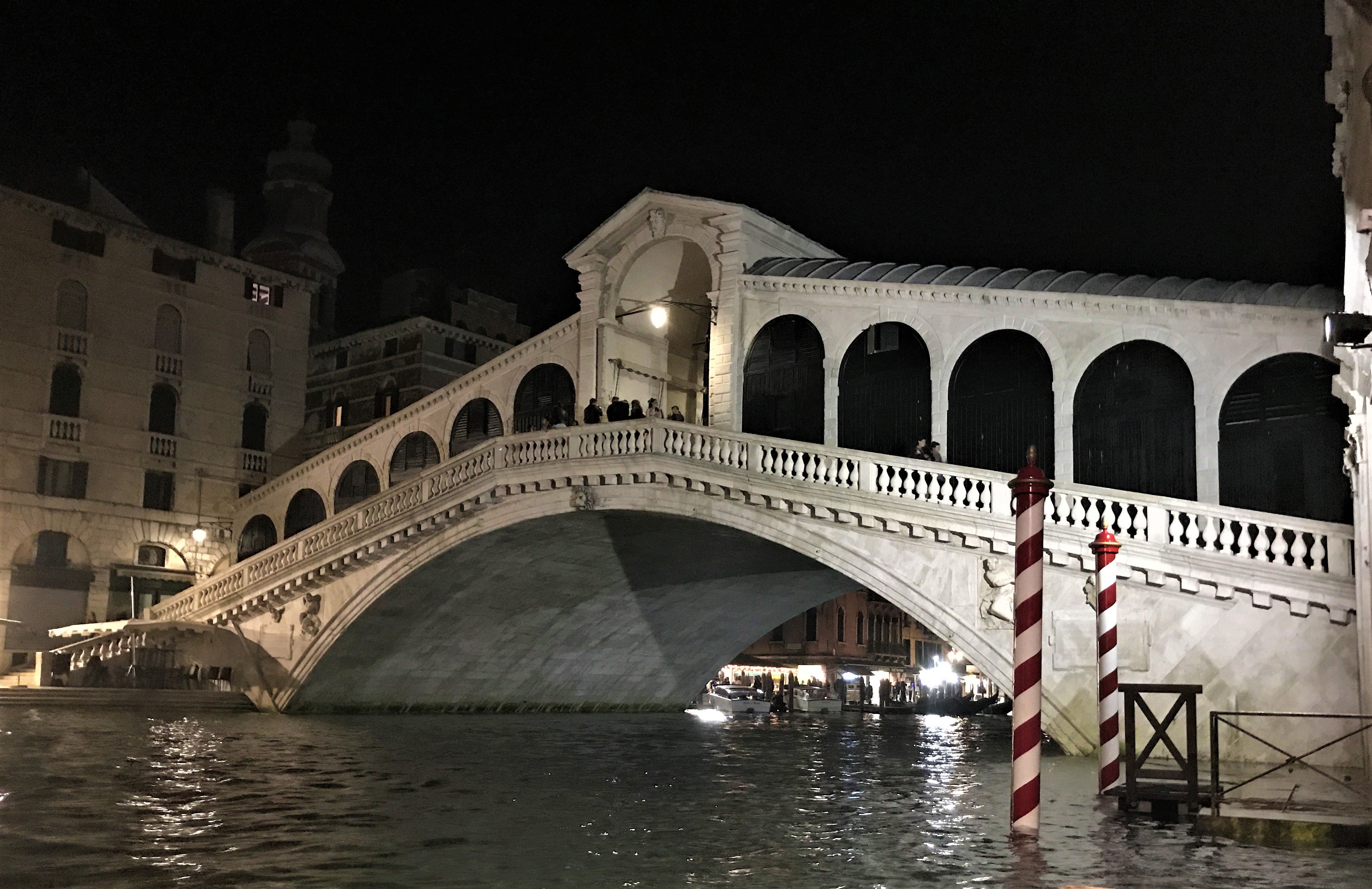 The Rialto Bridge by night

Over the centuries the Bridge underwent several restorations. The last one, financed by the entrepreneur Renzo Rosso, began in 2015 and lasted for about 18 months. So now we can admire the Bridge in its stunning beauty.
We are waiting for you to come to Venice, in order to show you this magnificent masterpiece, with all its inscriptions and decorative bas-reliefs, and to tell you stories and funny anecdotes about it.
Ciao!
Contacts: info@guidedtoursinvenice.com

Customized tours of Venice: the Germans' warehouse between the past and the future (section: Blog)

A private boat tour along the Grand Canal in Venice.  (section: Blog)

The best of Venice: what to see. (section: Blog)

A ghosts and legends tour in Venice. (section: Blog) 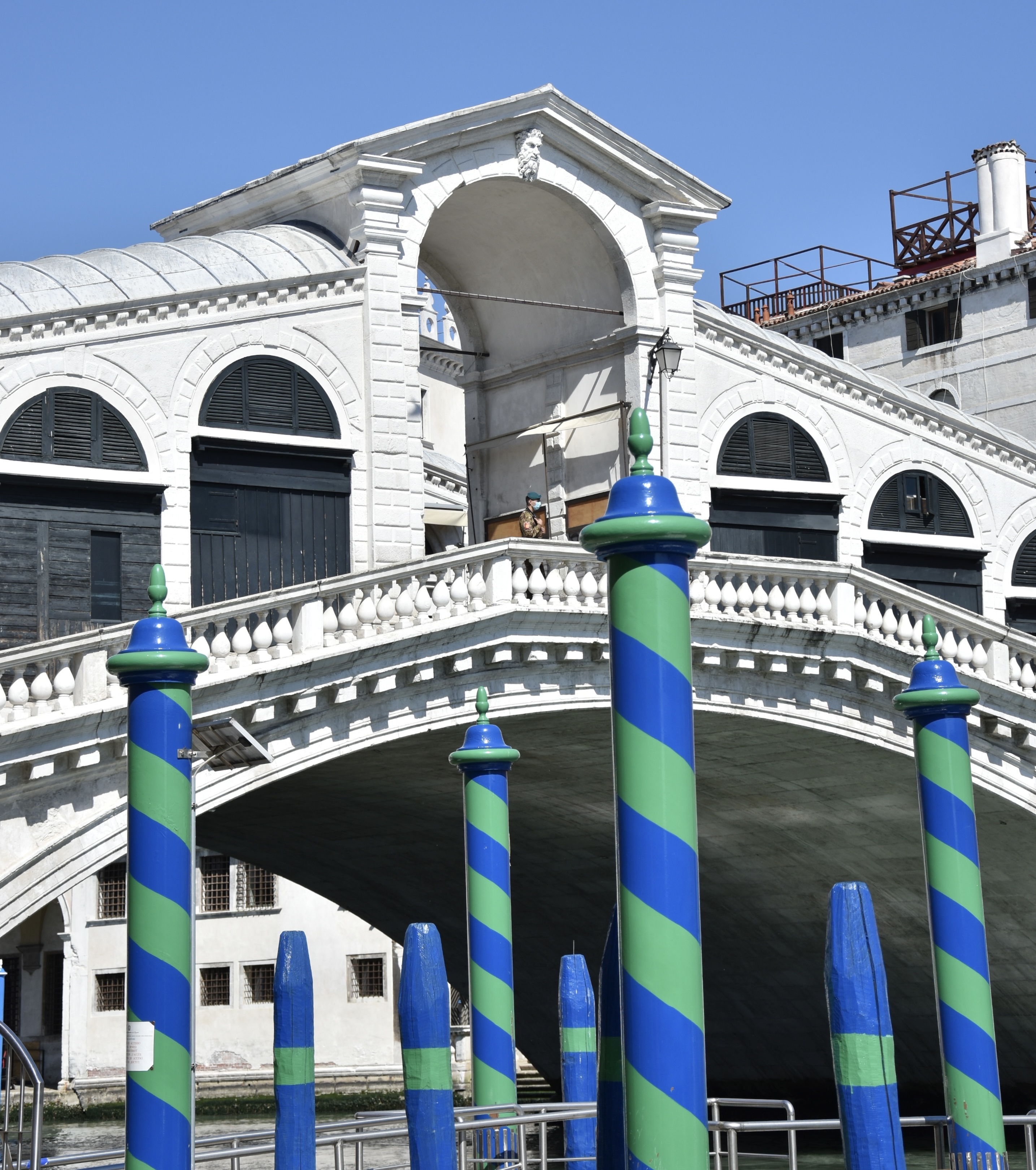