Customized tours of Venice: the Germans' warehouse between the past and the future

The history of this beautiful 'palazzo' and its function nowadays

Stepping back into the past, let's try to imagine the peculiar life in Venice, when this city was the most important commercial center between the East and the West: merchants coming, merchants leaving, peasants and nobles trying to get the best goods at the best prices, people chatting in a number of different languages.
Several are the reasons why Venice became in the Middle Ages a cosmopolitan, international Republic, where locals would live and cooperate with foreigners. The Venetian merchants who imported goods from Oriental countries along the Silk Road and across the seas would be followed by foreign merchants coming from all over, and the latter would try to sell their own goods or to purchase the Venetian ones. Quite frequently, these foreigners would establish their own commercial companies in Venice and would remain in town forever.
In one of the paintings by Francesco Guardi, a great Venetian landscapist of the 18th century, we can see how frenetic life was in the area around the Rialto bridge during the last century of independence of the Venetian Republic. 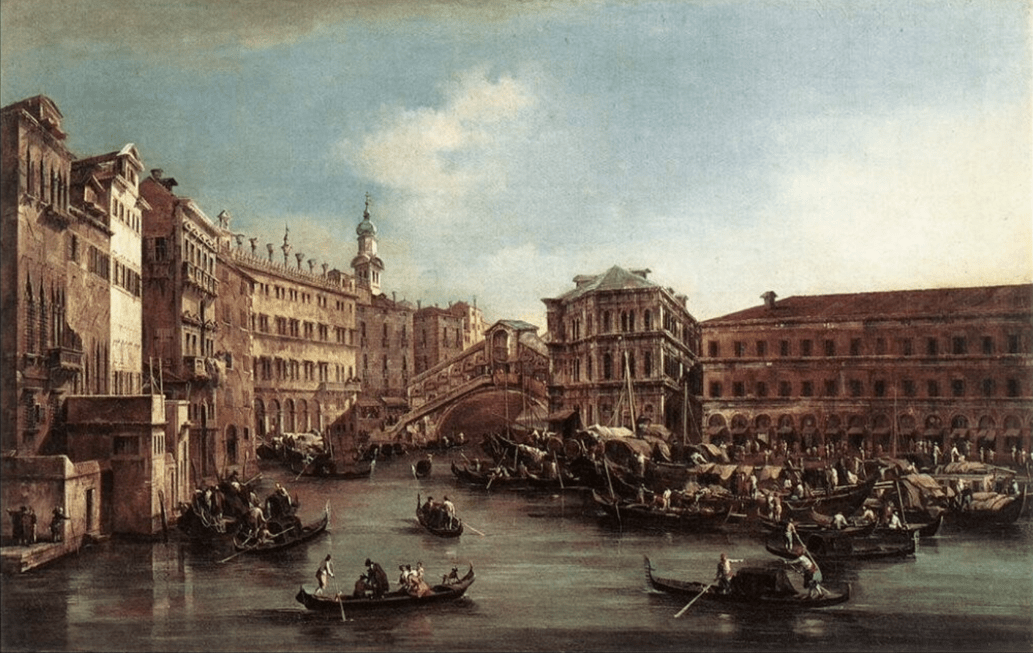 Starting from the 12th century, the foreign community of the German merchants was quite large and important in the city: the Senate of the Republic decided eventually to give them for rent a palazzo along the Grand Canal, at the footsteps of the Rialto bridge, in the commercial heart of Venice (it is interesting to notice that in those days in Venice the word "Germans" would refer to all merchants coming from northern Europe). The 13th century structure, unfortunately, was entirely destroyed by a fire in 1505.
It was then necessary to rebuild it quite quickly, and the new warehouse (fontego in Venetian) was completed by 1508. This building turned out to be quite large, due to the fact that the presence of this community in town was really relevant for the Republic, both from an economic point of view and from a cultural and artistic one. 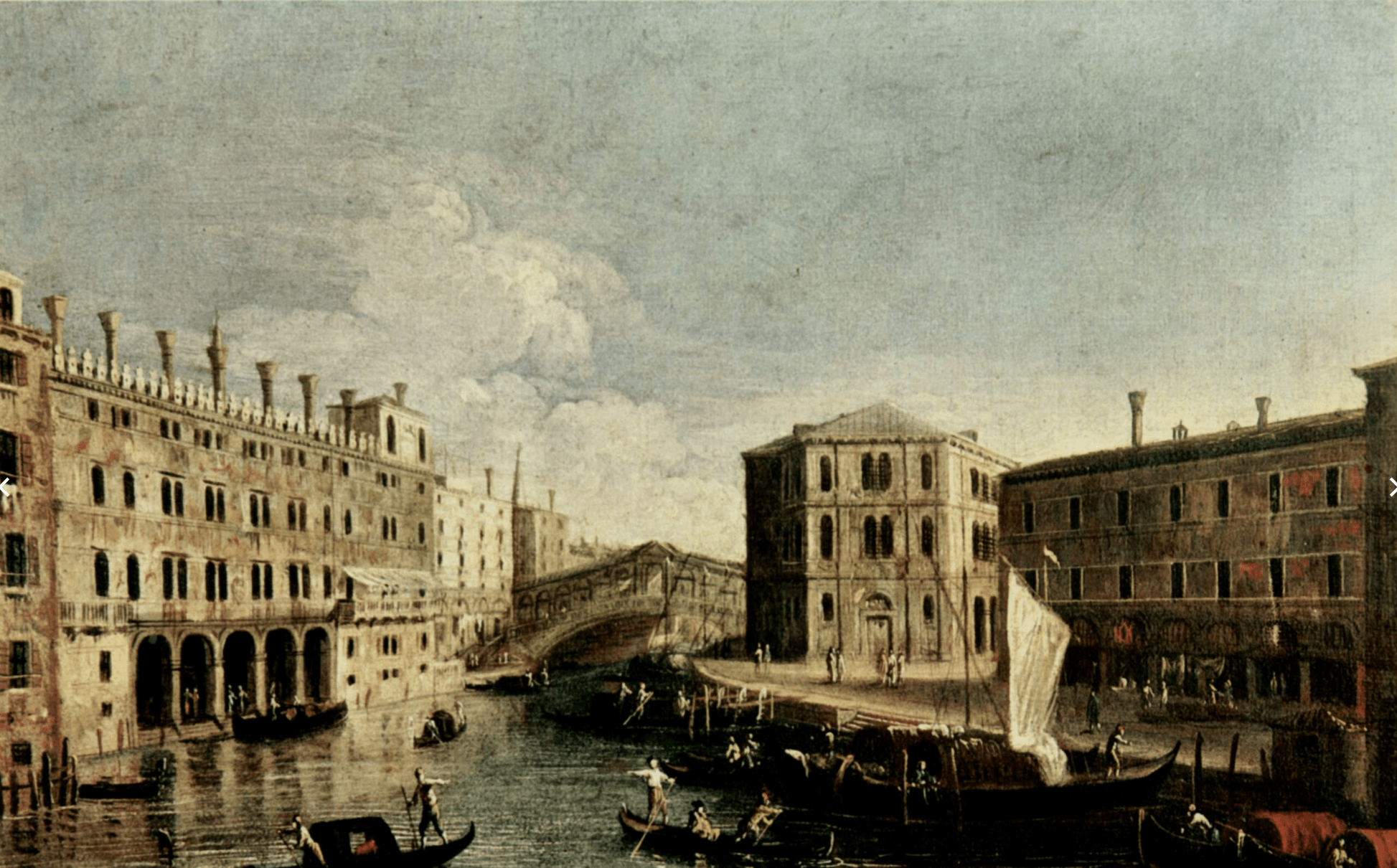 It was then decided to decorate the main façades of the building with frescoes. In that period, the Most Serene Republic was at war against Emperor Maximilian I, so it seemed a good idea that these frescoes should have stressed allegorically the power and the independence of Venice. This decoration was commissioned to two among the greatest Renaissance painters: Giorgione, who frescoed the main façade along the Grand Canal, and young Titian, who worked on the lateral façade instead. If we observe the following detail of a painting by Canaletto, another great Venetian landscape painter, we can notice that in the 18th century these frescoes were still quite visible. They represented mainly female figures as allegories for virtues, battle scenes, putti in the attitude of fighting. 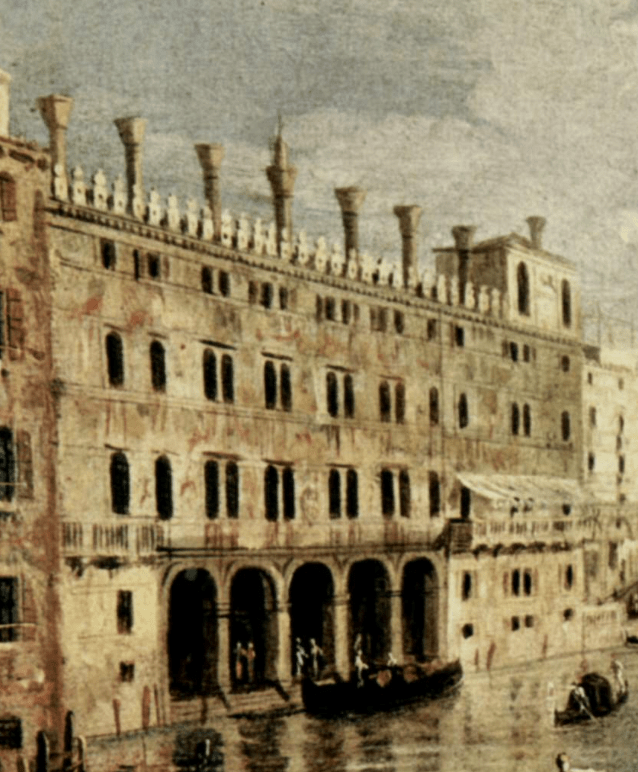 Unfortunately, today we can can admire only few fragments of these masterpieces, among them The Nude by Giorgione and Justice by Titian, preserved in the Ca' d'Oro museum. 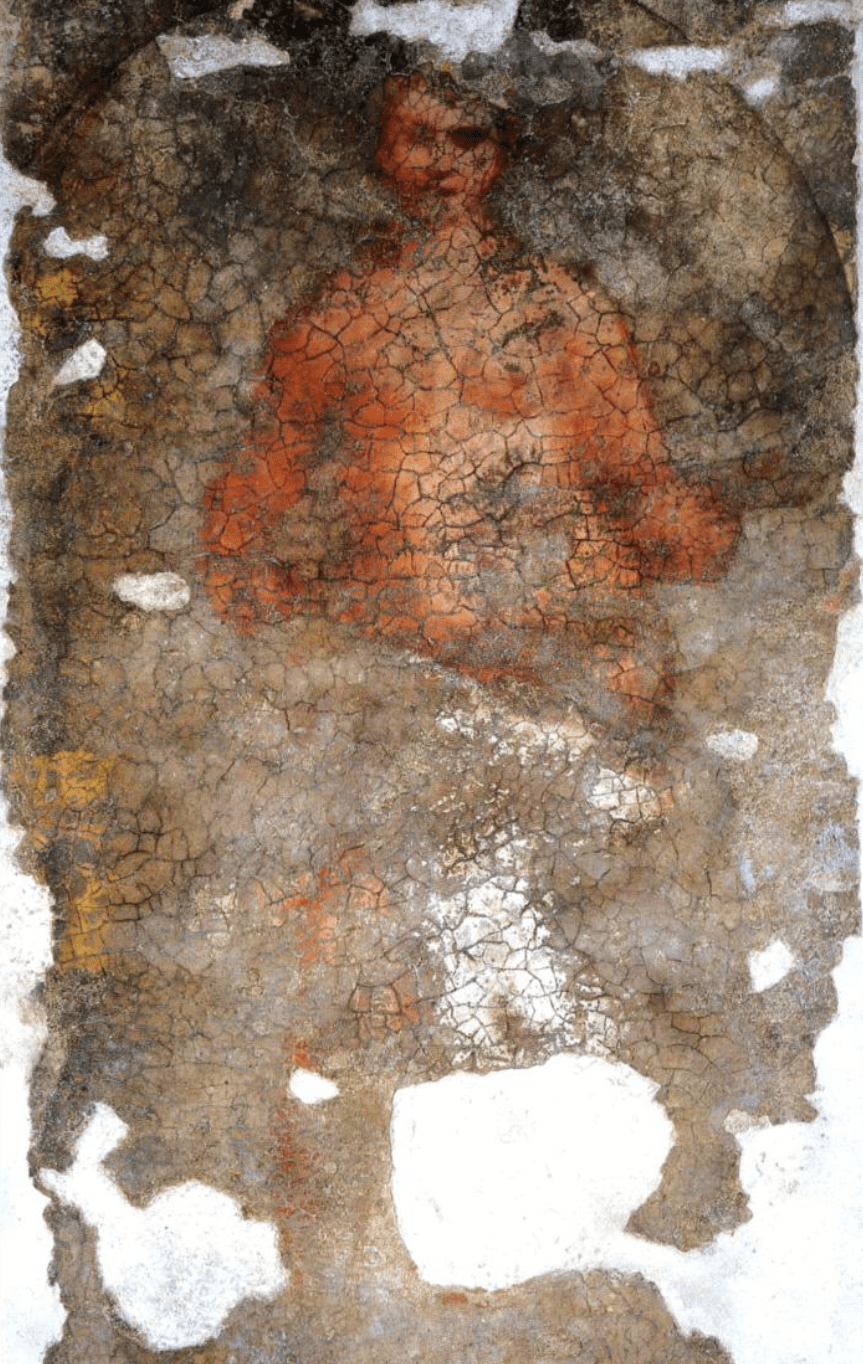 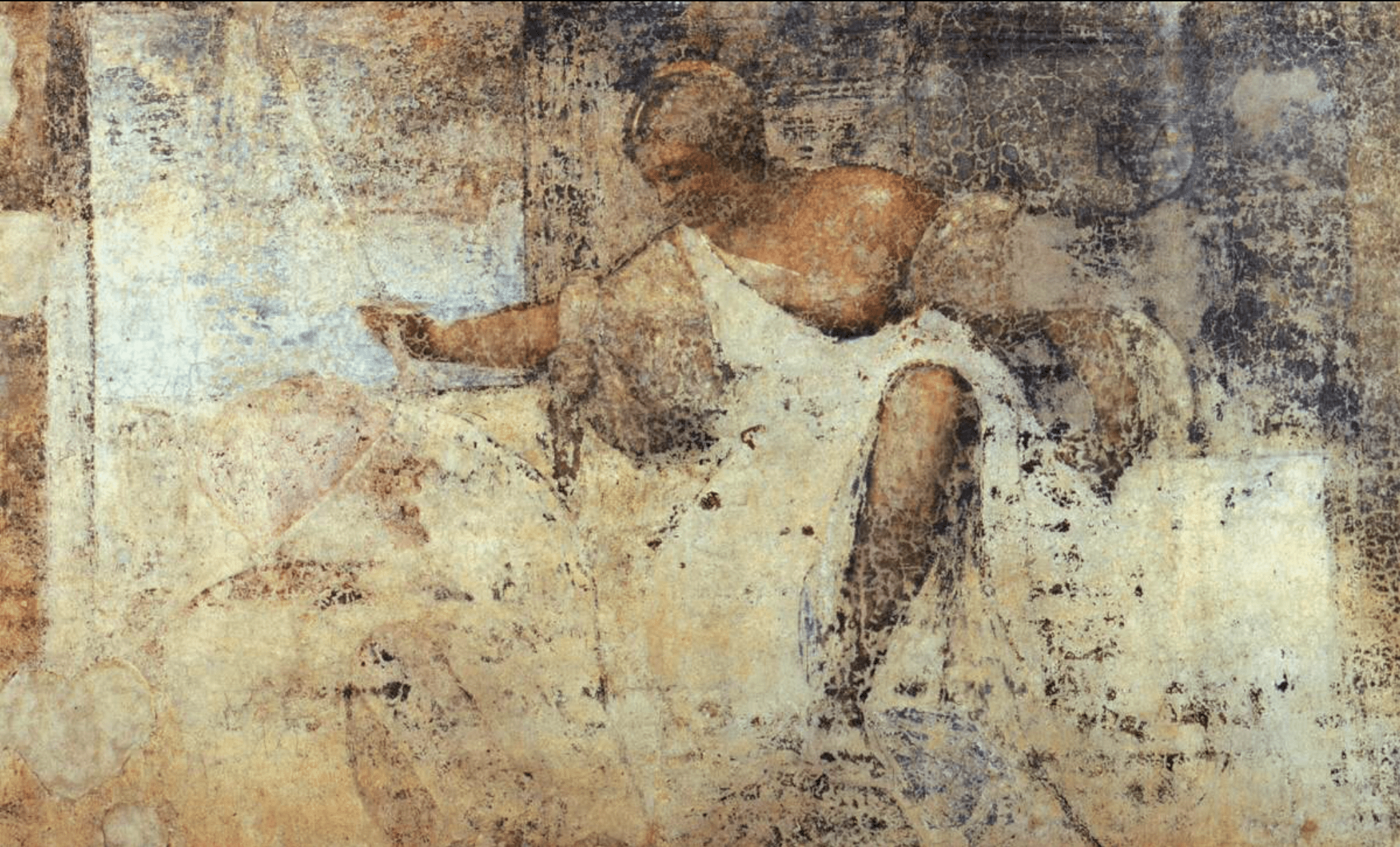 The ground floor of this warehouse was used as a storage for goods. On the upper floors there used to be roughly 200 rooms where the "German" merchants would live. The community had the possibility to use St. Bartholomew's church nearby for their religious services: here, in the chapel of the German merchants, the mail altar was decorated with "The Feast of the Rosary" (Rosenkranzfest, 1506), a masterpiece by the famous northern painter Albrecht Dürer (today this canvas is at the Narodni Galerie in Prague). 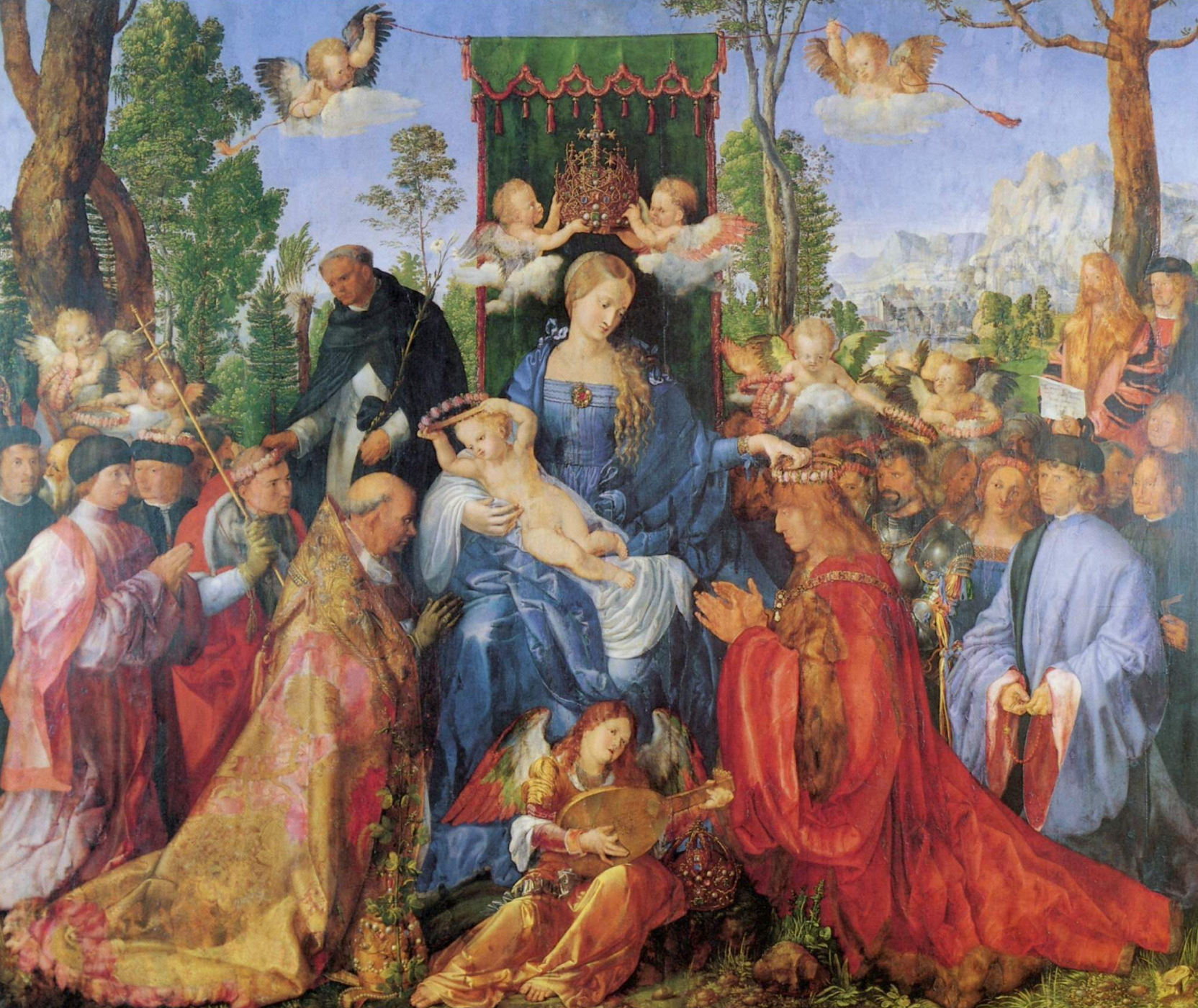 In 1797, when Napoleon came and the Republic fell, the fontego was closed. Eventually, after having become the emperor, Napoleon decided that the building had to host the custom offices. 1937 the structure was entirely restored and underwent some changes: the court yard was closed by adding a skylight, the lateral little towers were destroyed, whereas some windows were added. In the following year, it became the central Post Office in town. 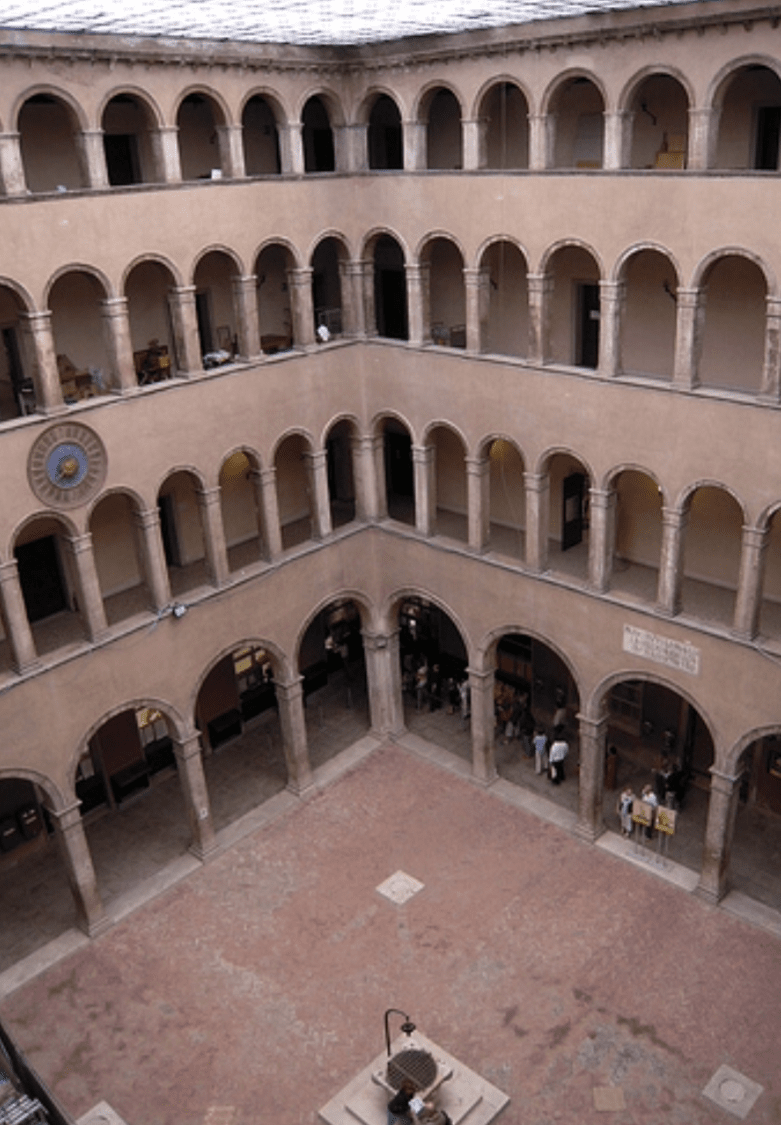 The history of this palazzo still goes on! On October 1st, 2016, this fontego was reopened with a new name, "T Fondaco", where Fondaco (or fontego) stands for "warehouse" and T stands for "travelers". In 2008 the Benetton family purchased the building for 54 million euros, 6 of which were given to the City Council of Venice in order to change the purpose of the structure from public to private. Afterwards, the company DFS (Duty Free Shop) spent roughly 40 million euros for the restoration, commissioned to the archistar Rem Koolhass, as to transform the former fontego into the most luxurious Shopping Mall in Venice. DFS has employed about 500 people and its target is mainly focused on Oriental customers. On the ground floor we can find a Food Mall, whereas on the other floors 60 prestigious brand boutiques find place. The former brick floor has been covered with red and white marble tiles. The well, which once occupied a central position in the courtyard, has been moved sideways. The skylight has been substituted with a steel and glass roof, which has then become the fourth floor of the building; this area is meant to be used for exhibits, shows and events in general. In these days we can admire the exhibit Plessi Under Water. Here is a short video where you can see Fabrizio Plessi's works, as well as the structure of this fourth floor. 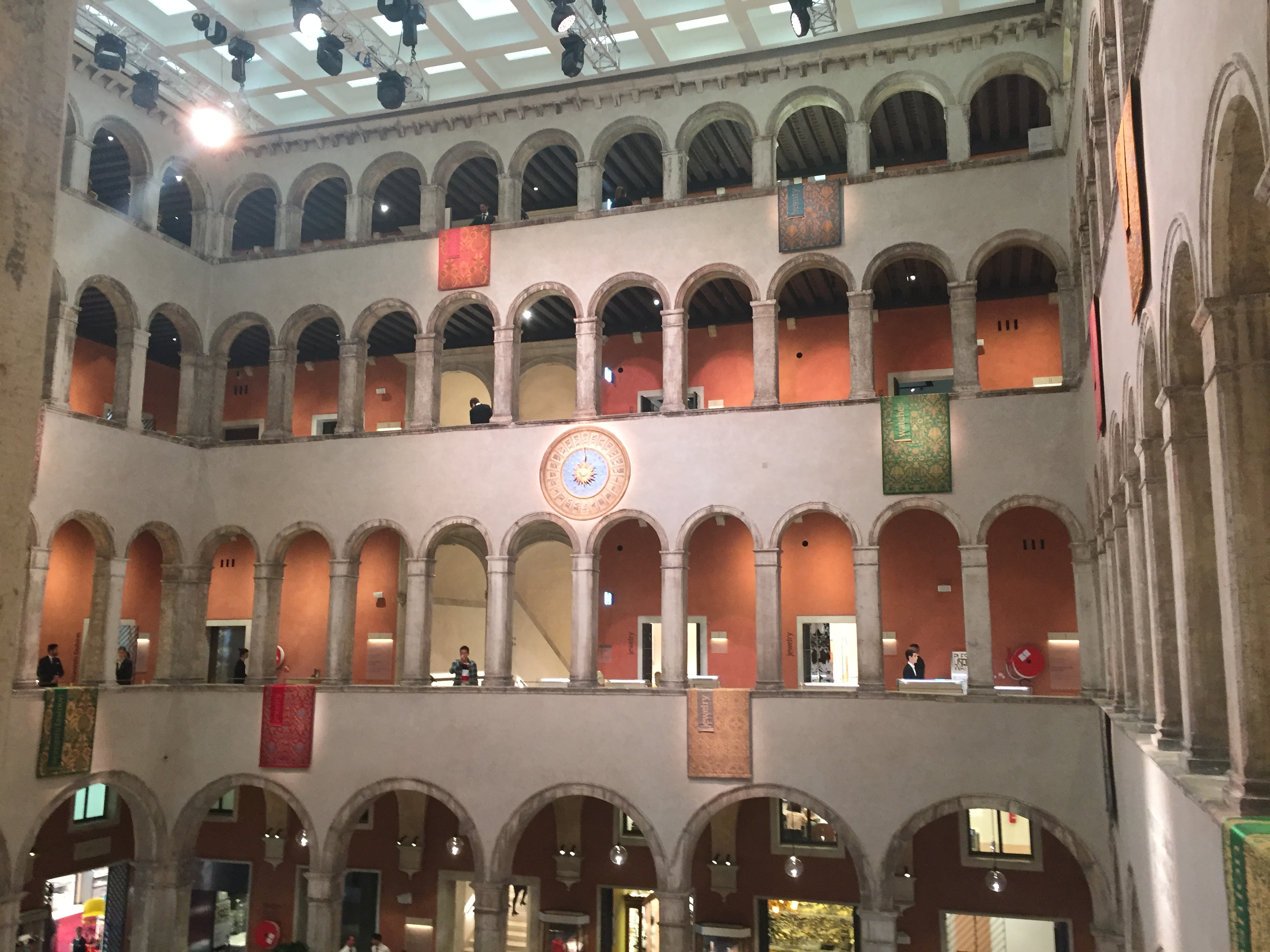 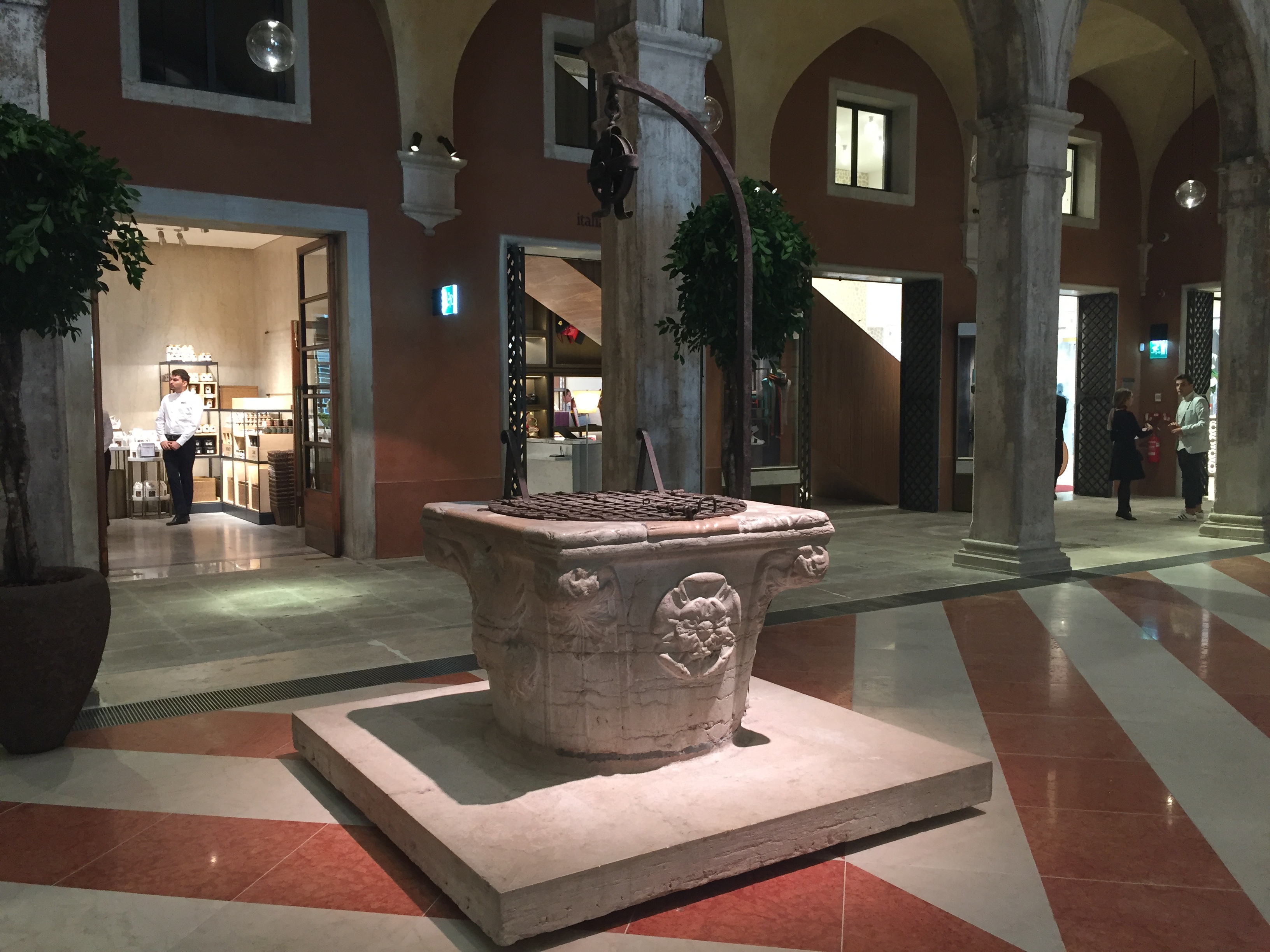 From this floor visitors can climb up to the terrace, from where it is possible to have a 360 degree view of Venice: it is a spectacular, breathtaking view on the rooves of Venice, on the altane, on the Grand Canal, on the most imposing monuments and buildings; and in the distance, far away, on the Alps. 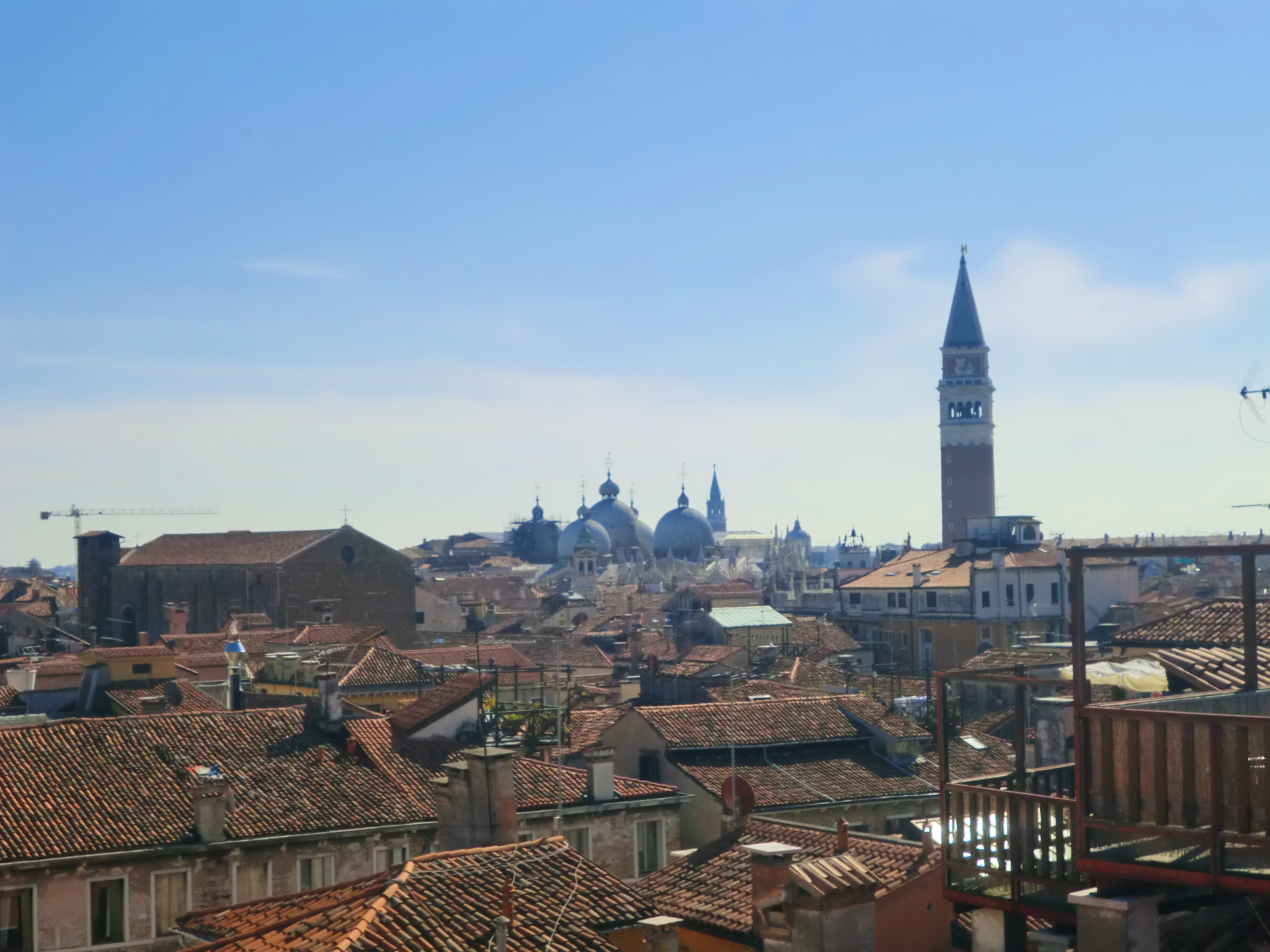 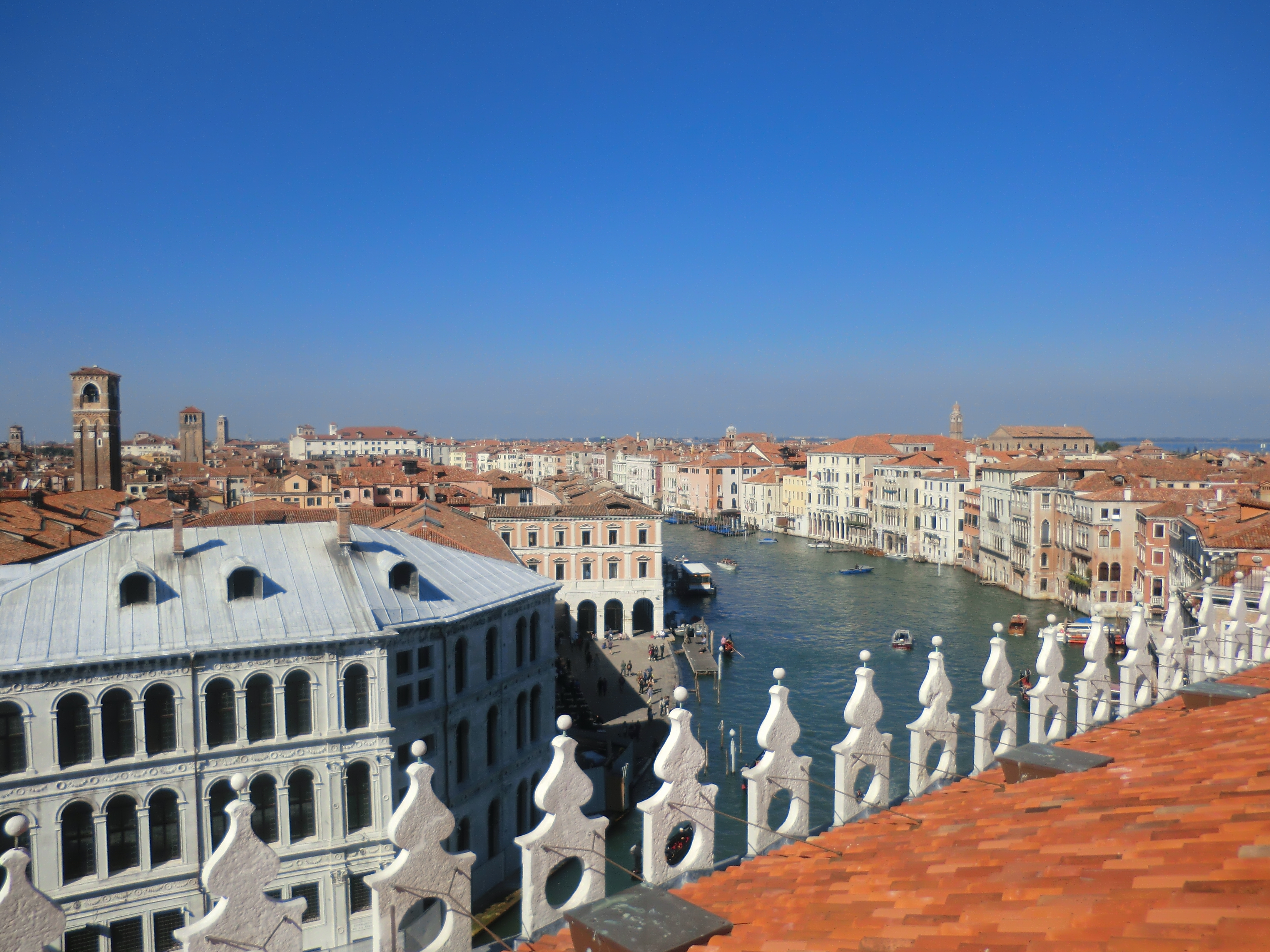 Venetians and foreigners have quite different opinions about this radical transformation. Someone stresses the fact that a building of great historical and artistic value has become one of the frequent Malls that you can see in Dubai and in other cities of the Middle and Far East. Others instead seem to appreciate this change, especially because the structure definitely needed to be restored. Moreover, it can attract the attention of a large number of tourists coming to Venice from all over the world, thus restoring to the city its real nature: a city oriented on international commerce, as it was for centuries in the past, when it was a must for millions of foreign merchants. 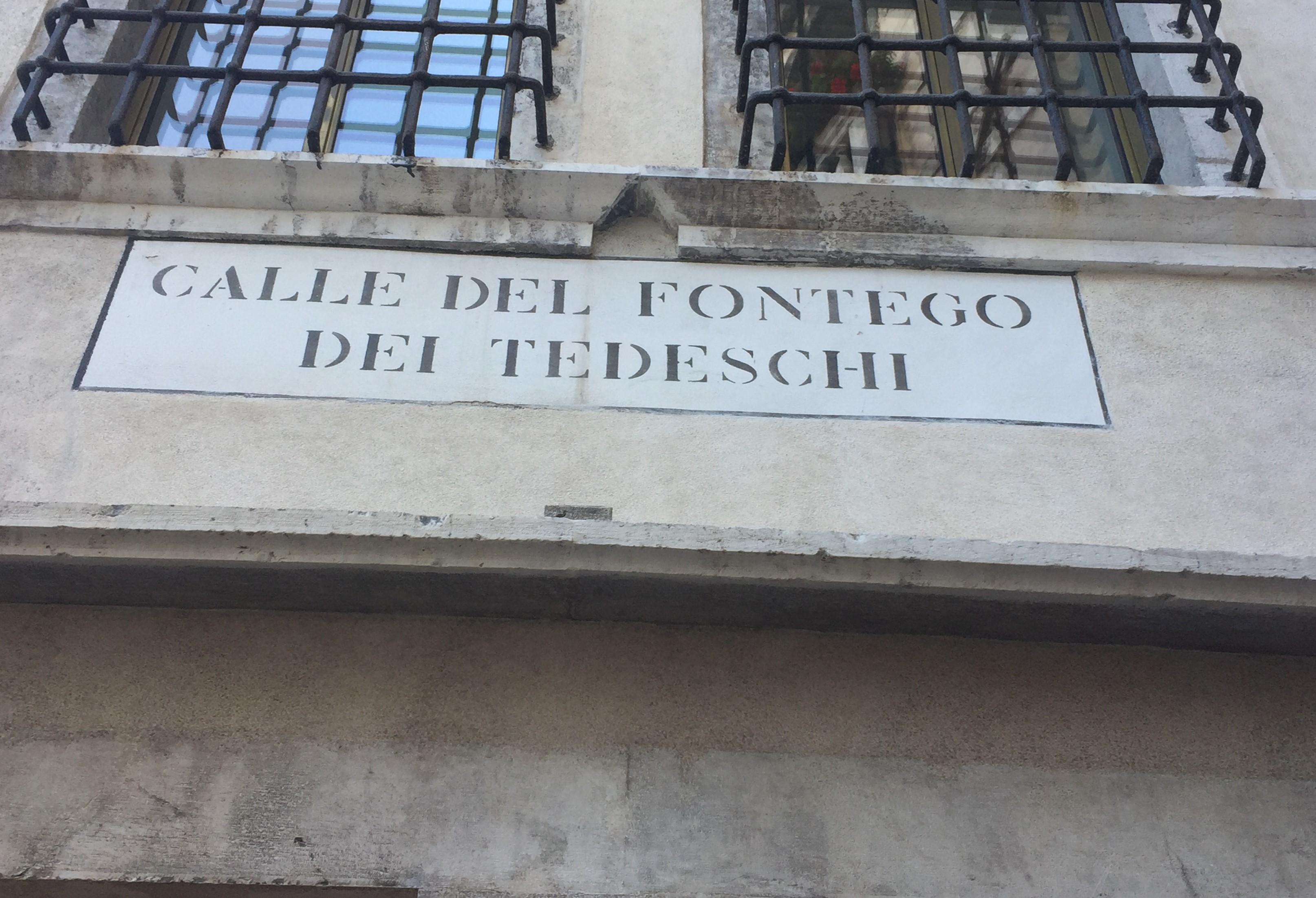 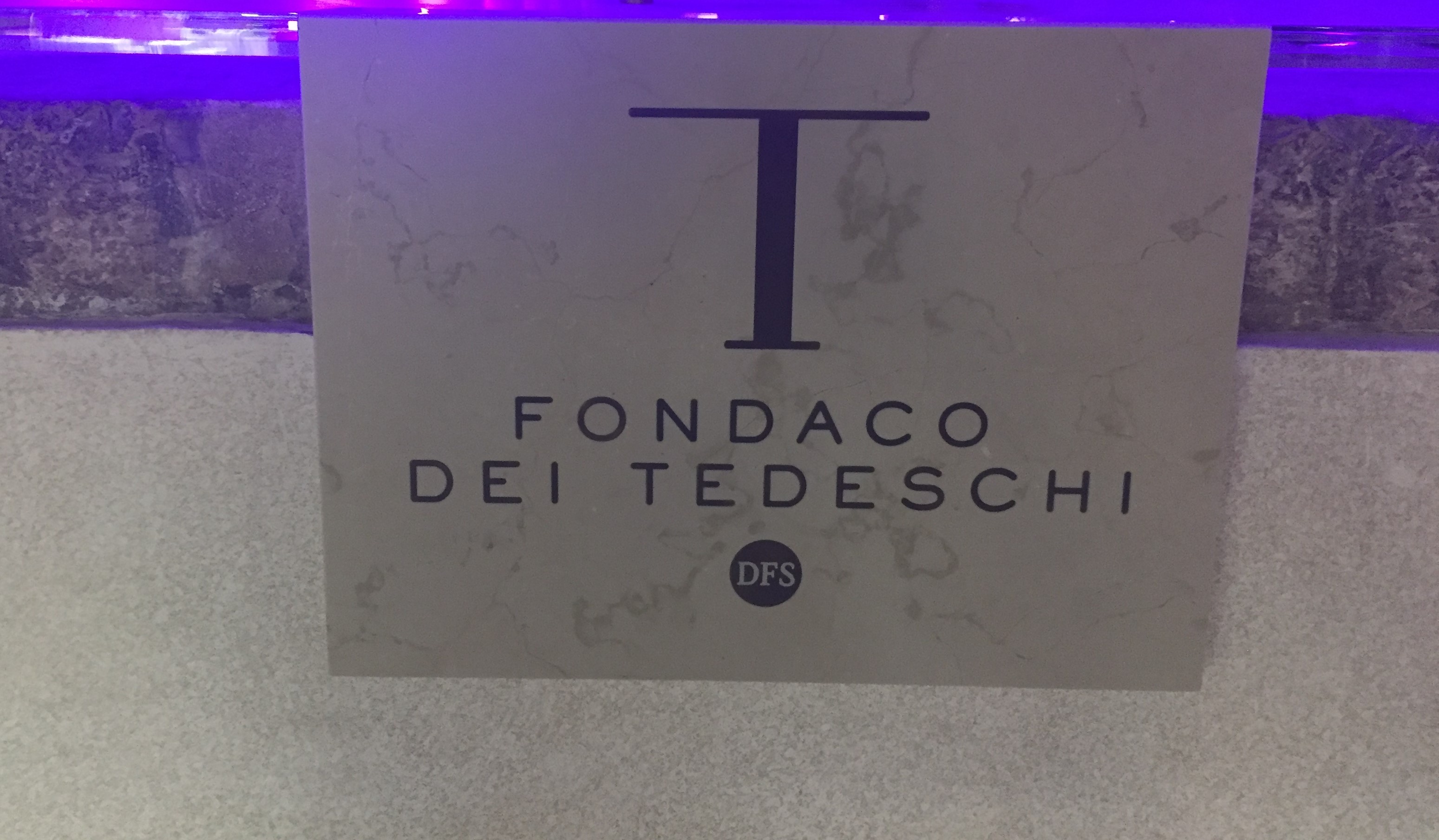 We do not dare to judge all these changes and transformations that the fontego has undergone and that have had such an impact on the city. Our only aim was to describe shortly its history and atmosphere. We wonder how in future centuries art historians and critics will judge this restoration.

Let us take leave with this picture of the lion that you can find over the entrance door to the Fondaco.

We will come back to you shortly! 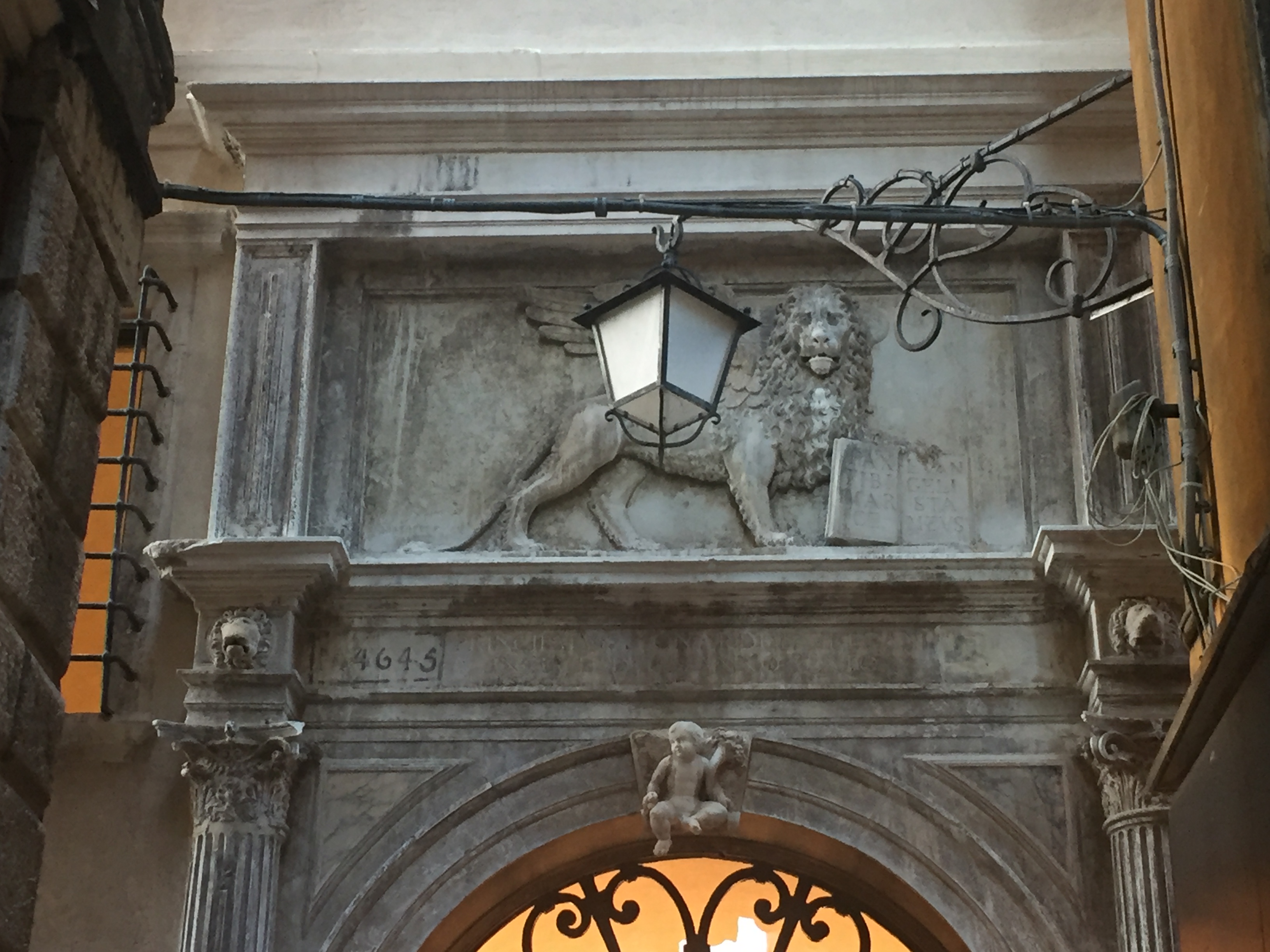