On April 25th in Venice we celebrate not only Liberation Day, but also the feast of our Patron Saint, St Mark the Evangelist. We have then decided to write about his most popular miracles, which were frequently represented by Venetian painters and sculptors.
Kids, it might be quite interesting also to you to listen to these stories and then see their reproduction in Venetian art throughout the city!
Are you ready? Let us then start this journey through history, legends and art. 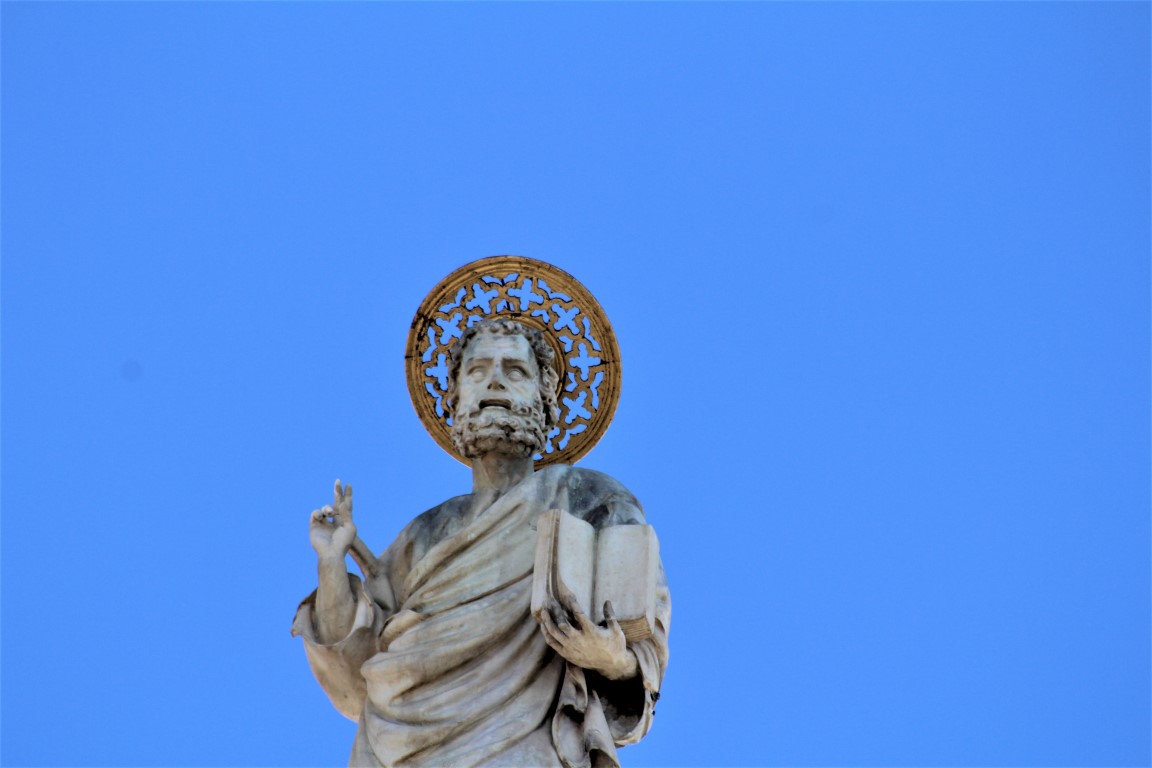 St. Mark's statue on top of the Basilica

One of the most famous miracles concerns the shoemaker Anianus. Mark, upon his arrival in Alexandria of Egypt, inspired by Archangel Michael, went to Anianus' workshop to have his broken sandal fixed. While working, Anianus hurt himself with one of his tools and cried "Heis ho Theos" (which means "God is one"). At these words, Mark started to preach the Word of God and, with his spittle mixed with dust from the street, he miraculously healed the shoemaker. Anianus then became a Christian and was baptized by St. Mark himself. 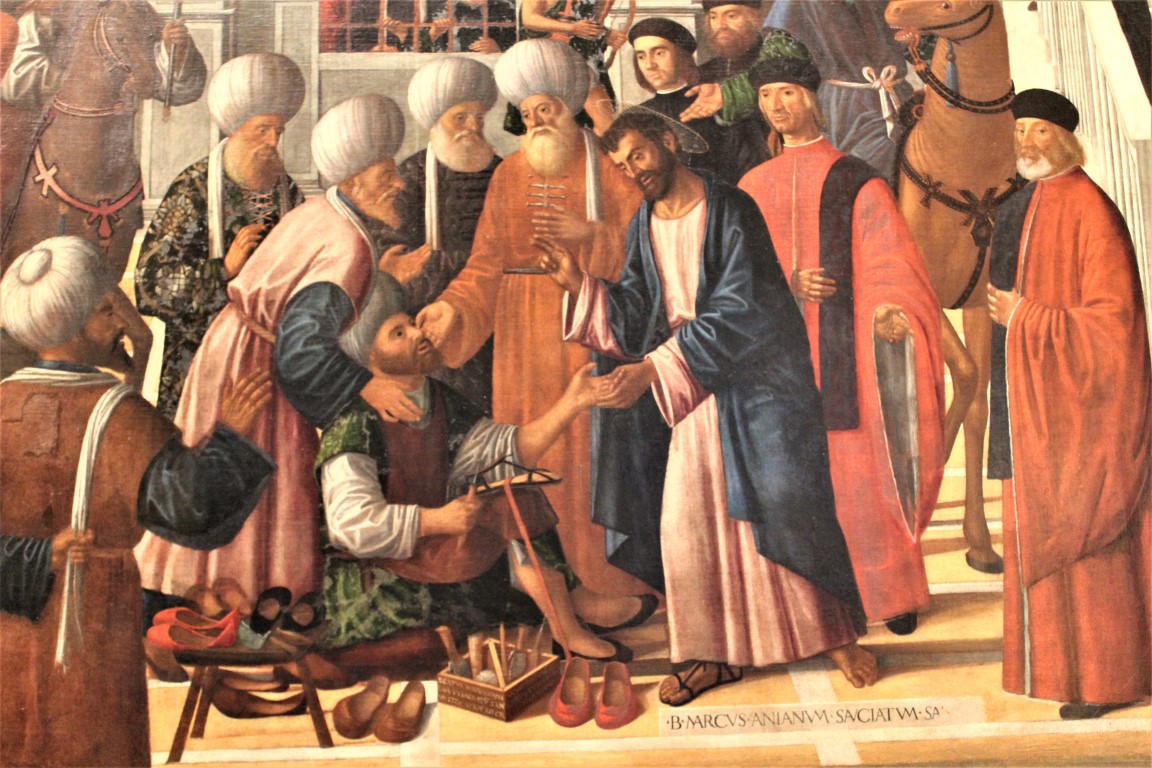 St. Anianus became eventually the patron saint of the shoemakers, who in Venice were organized in the Shoemakers' Guild and met in a building in Campo San Tomà. Still nowadays we can admire the bas-relief in the lunette above the entrance door of such building, with the representation of the miracle, along with a very interesting series of different shoes. 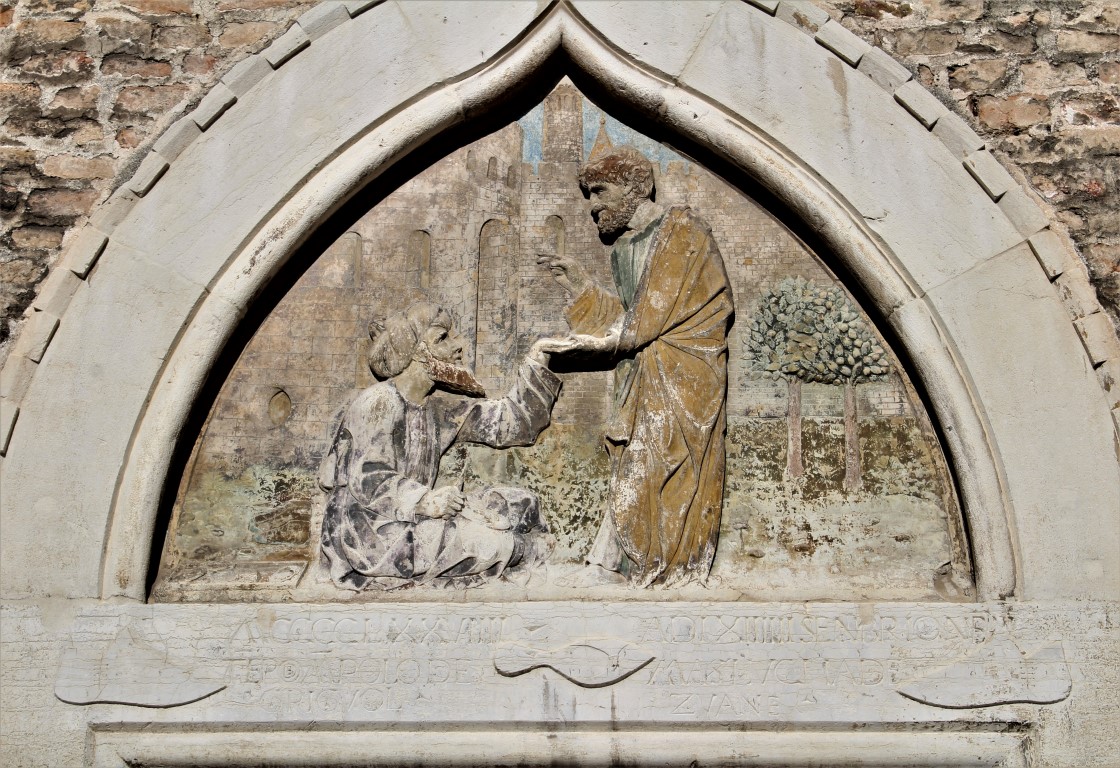 We can see another version of the very same miracle sculpted on the façade of Scuola Grande di San Marco, in Campo Santi Giovanni e Paolo. 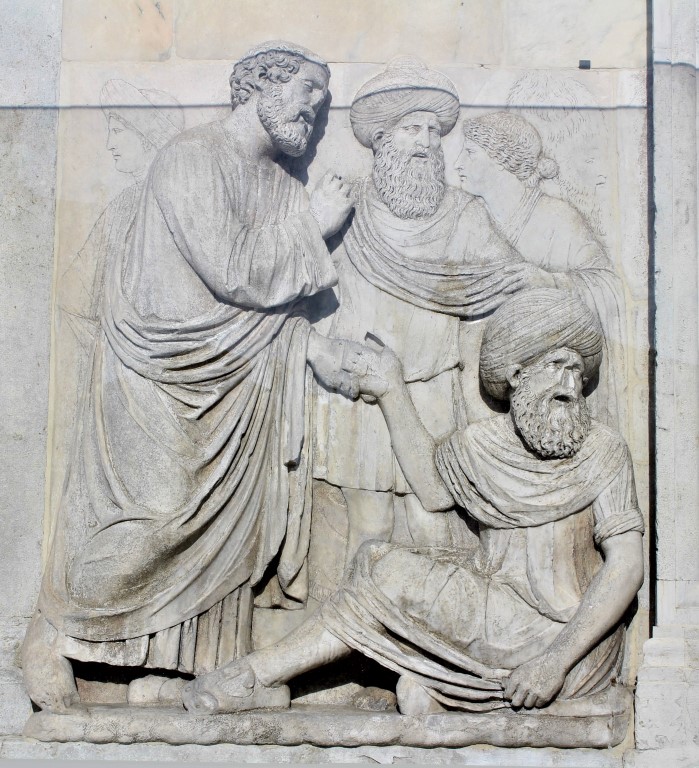 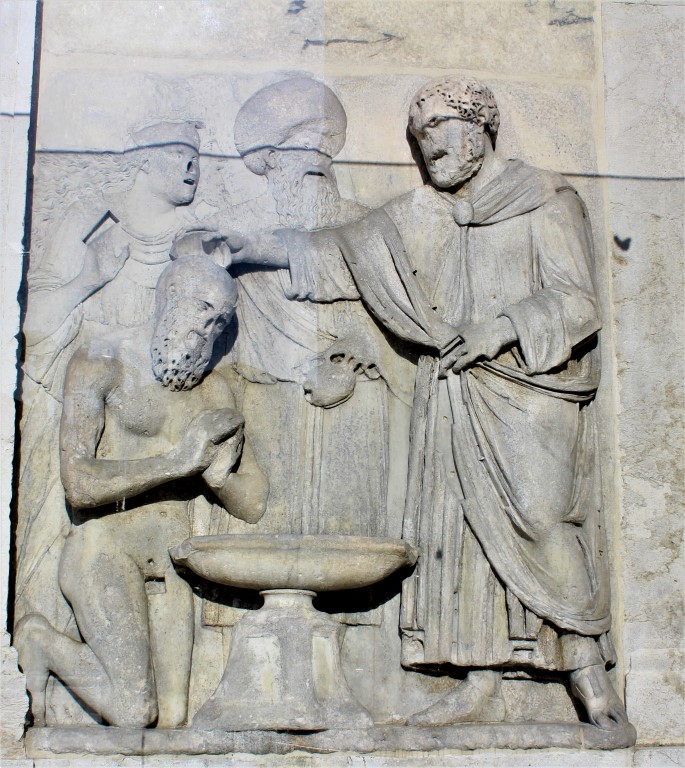 The same scene is present also in St. Mark's Basilica, in Admiral Zen's Chapel, in an exquisite mosaic of the 13th century. 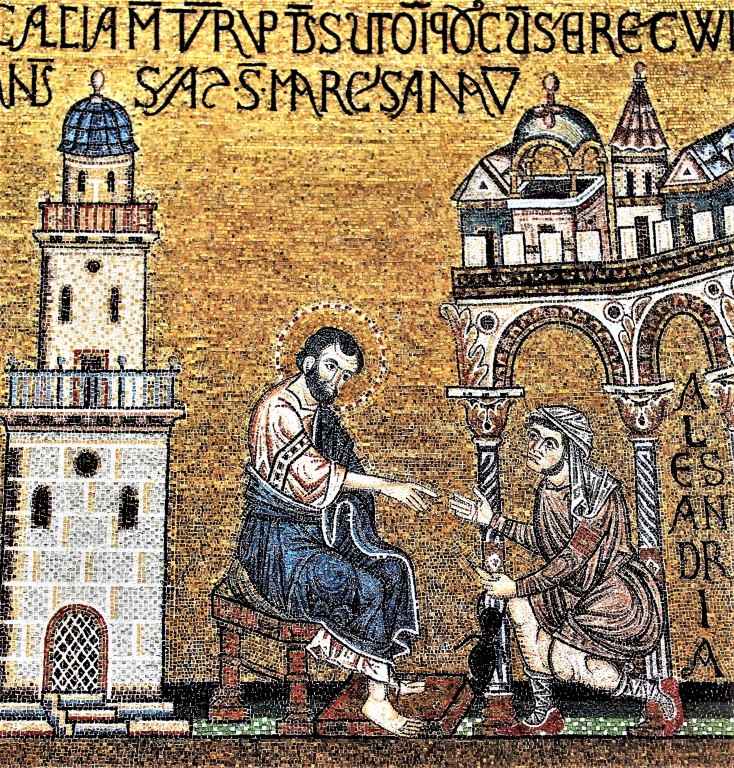 For a second miracle we should go back to the Accademia Galleries, where we find the so called Miracle of the Slave, painted in 1548 by Jacopo Tintoretto. The slave is lying naked on the floor, his skin almost glowing in its whiteness. He is about to suffer the martyrdom for having worshipped St Mark's relics. But here comes St Mark, flying downward into the scene like a lightning, as if he had just ripped the canvas. His only presence is so powerful that the instruments of torture break into pieces. Here audacity, innovation and bright colors make this work of art a unique masterpiece. 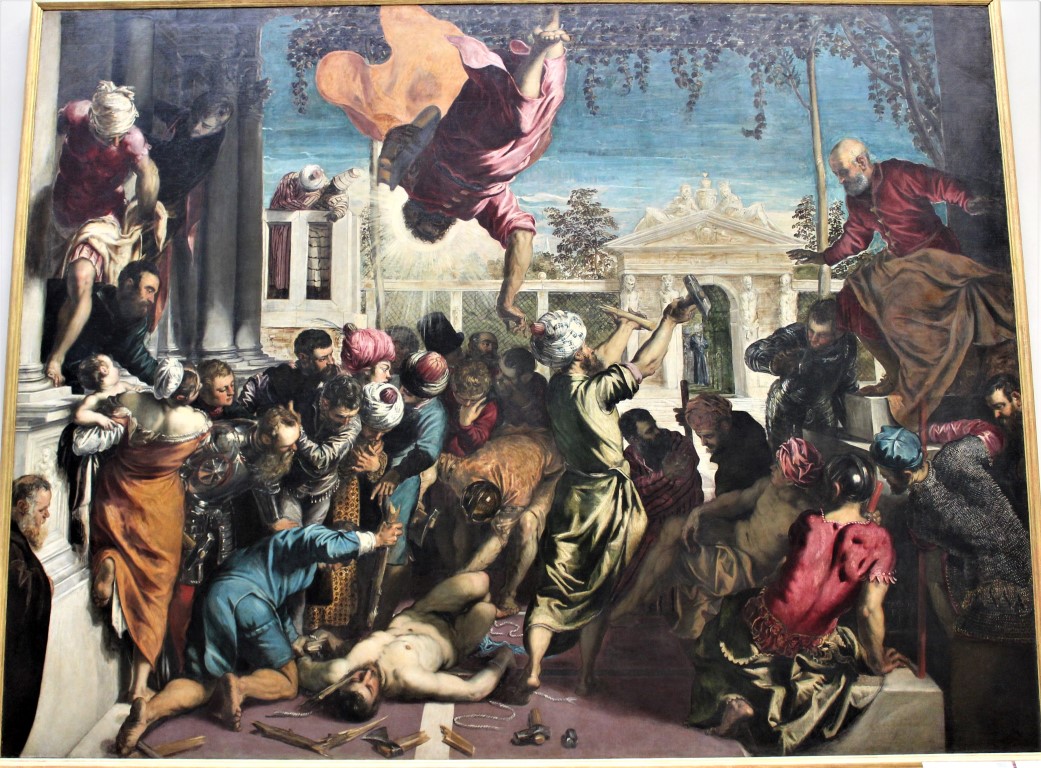 The Miracle of the Slave by Jacopo Tintoretto, 1548, Accademia Galleries 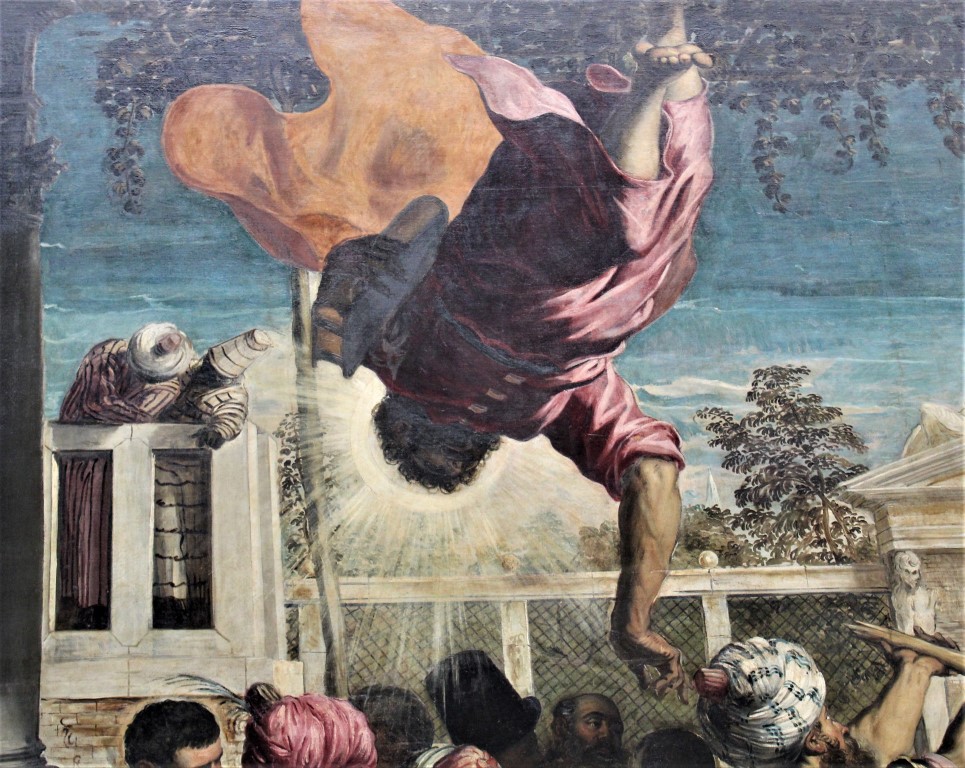 The Miracle of the Slave by Jacopo Tintoretto, 1548, Accademia Galleries (detail with St Mark) 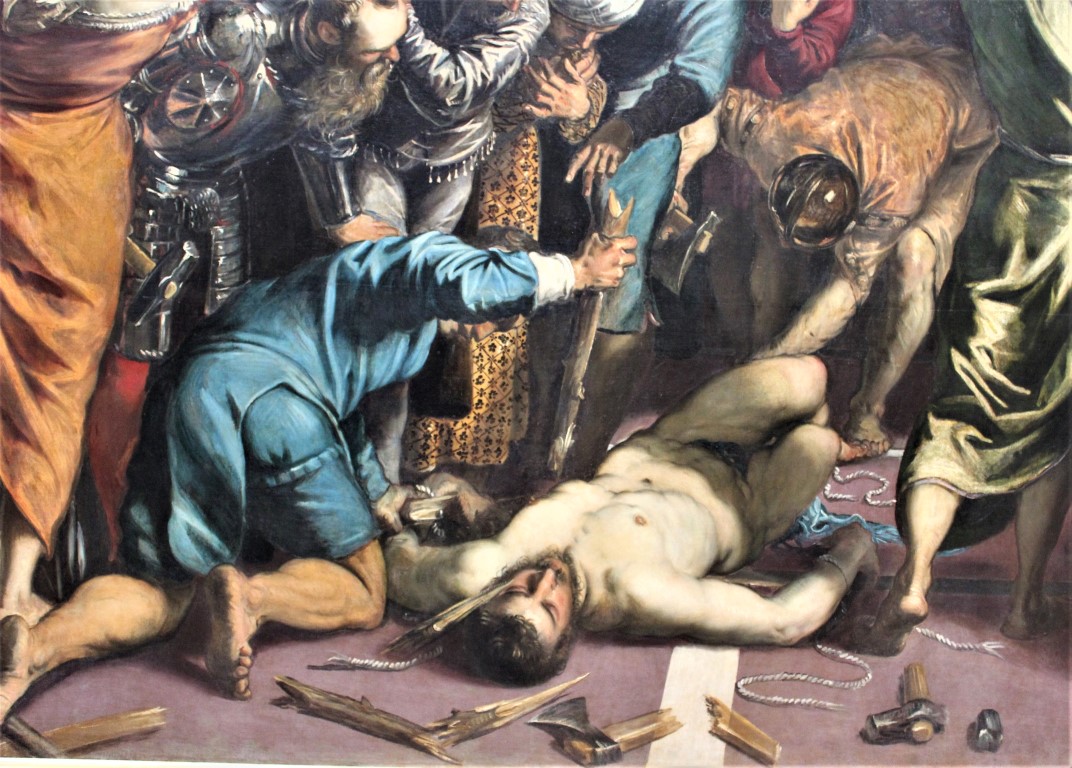 The Miracle of the Slave by Jacopo Tintoretto, 1548, Accademia Galleries (detail with the Slave) 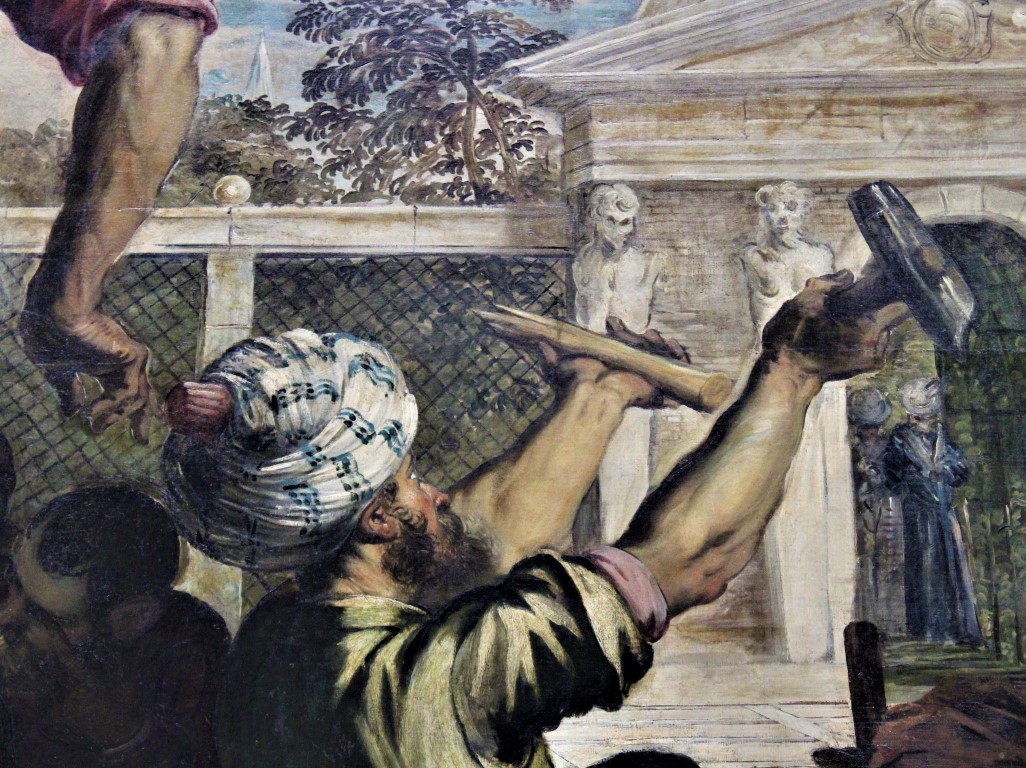 The Miracle of the Slave by Jacopo Tintoretto, 1548, Accademia Galleries (detail with the broken tools)

In St Mark's Basilica, namely in the choir, we find the same miracle interpreted as a bronze bas-relief, along with other stories of St. Mark's life, by Jacopo Sansovino. 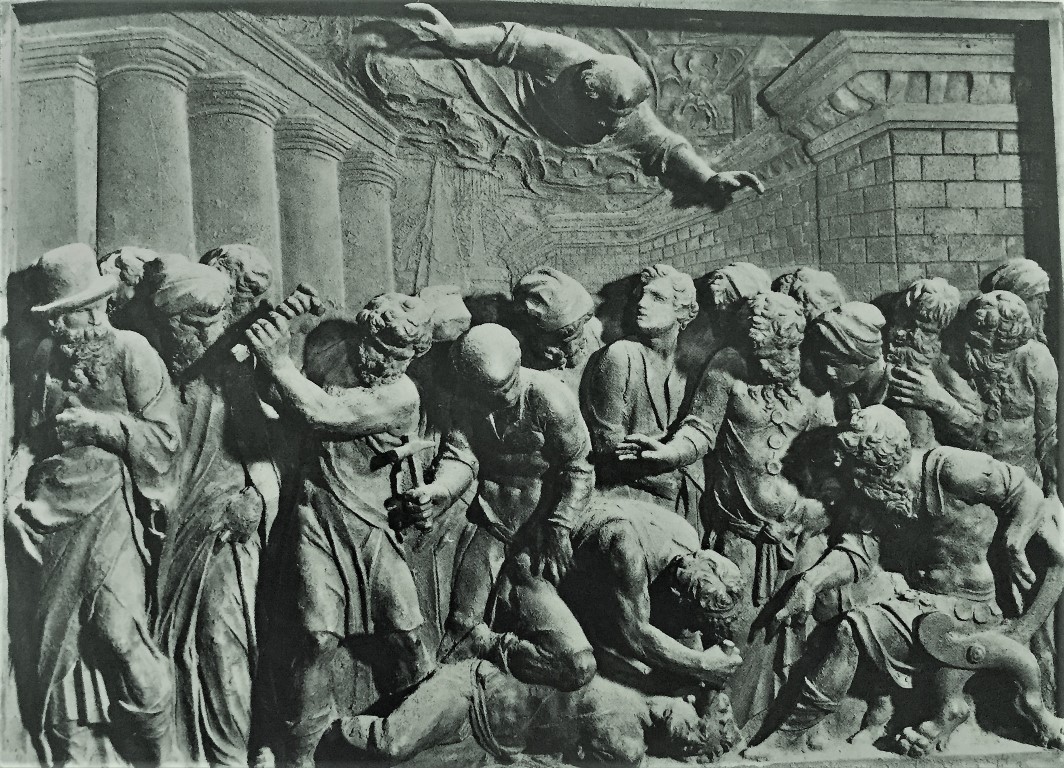 The miracles by St Mark concern also Venice itself. The painter Paris Bordon painted a great interpretation of a typically Venetian legend about St Mark's ring and the fisherman. As it frequently happens with legends, also this one arouse out of a historical event: on February 25th, 1341, a violent storm hit Venice, causing a terrible flood. According to the legend, that same night a man asked a Venetian fisherman to take him to St George's island. There the two of them met a young warrior who joined them in the boat. Then the fisherman was asked to head to St Nicholas' church on the Lido island, where they picked up an old man. The three men asked to be taken out into the open sea, where the storm was stronger than ever. 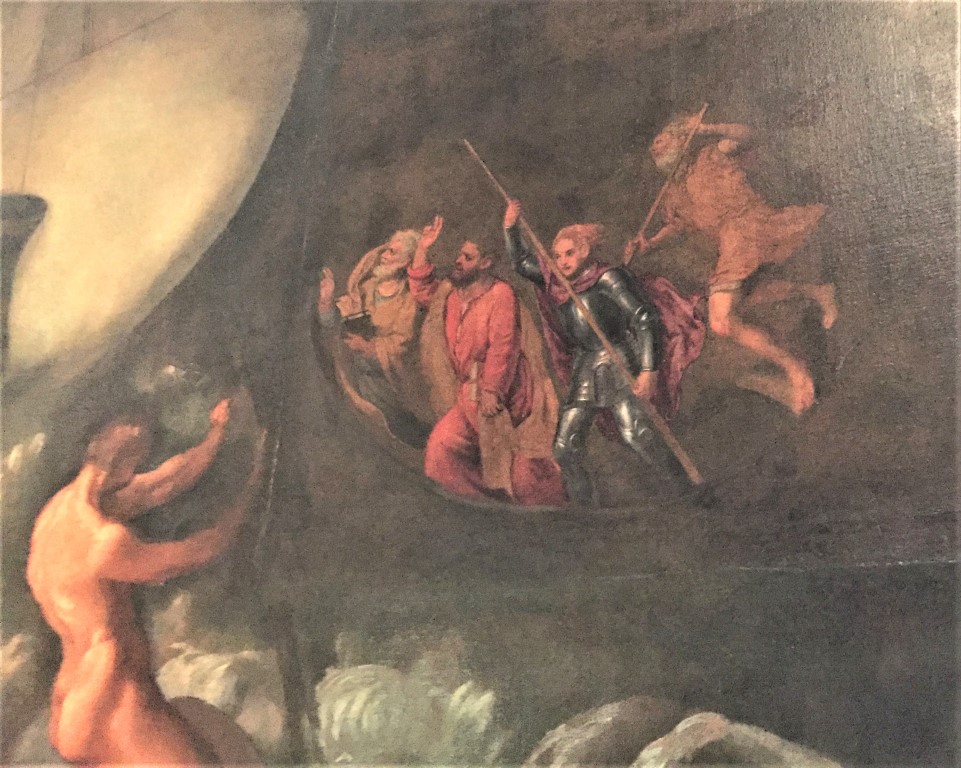 The storm at sea by Paris Bordon and Jacopo Palma the Elder, Accademia Galleries (detail with the three saints and the fisherman on the boat)

Out at sea, they reached a ship full of demons guided by the devil himself. The three men with the sign of the cross were able to make the ship sink into the abyss. The three then revealed themselves to the fisherman: the first was St Mark, the second St George and the third one St Nicholas. St Mark then gave the poor man his own ring, as a proof of the miracle. On the next day the humble fisherman gave the ring to the Doge himself. Soon afterwards a holy procession was organized to thank the three saints for having saved the city. 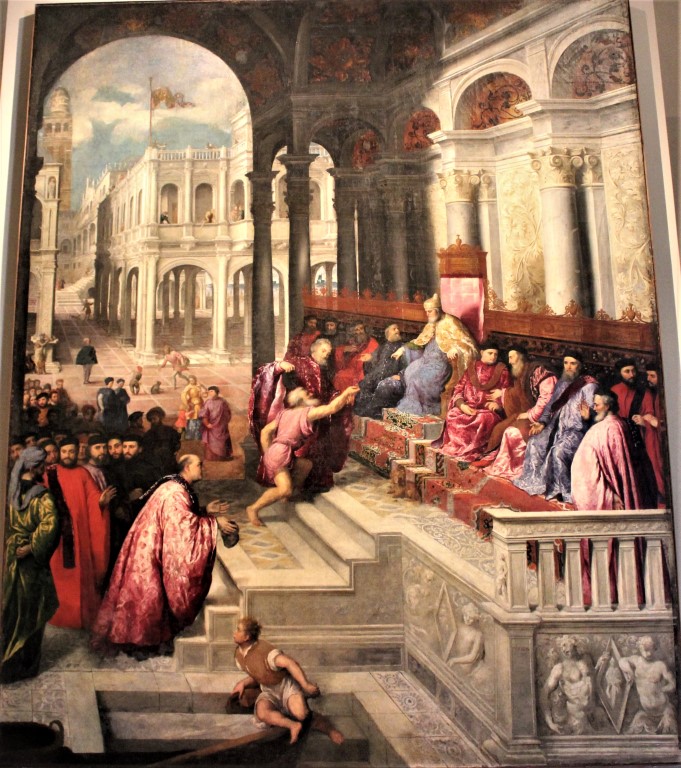 The fisherman gives the ring to the Doge by Paris Bordon, ca. 1534, Accademia Galleries 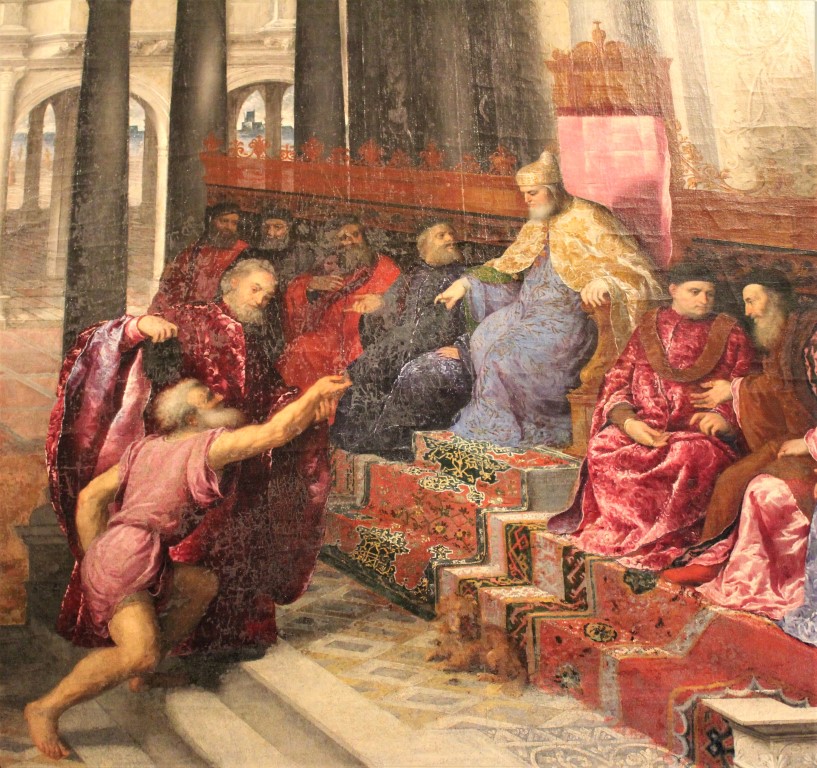 The fisherman gives the ring to the Doge by Paris Bordon, ca. 1534, Accademia Galleries (detail)

There is definitely much more to tell about our patron saint, but we promise to dedicate other posts on the subject. We would like to say goodbye with a picture that we love so much: the winged lion, the symbol of St Mark the Evangelist. Ciao!
Contacts: info@guidedtoursinvenice.com 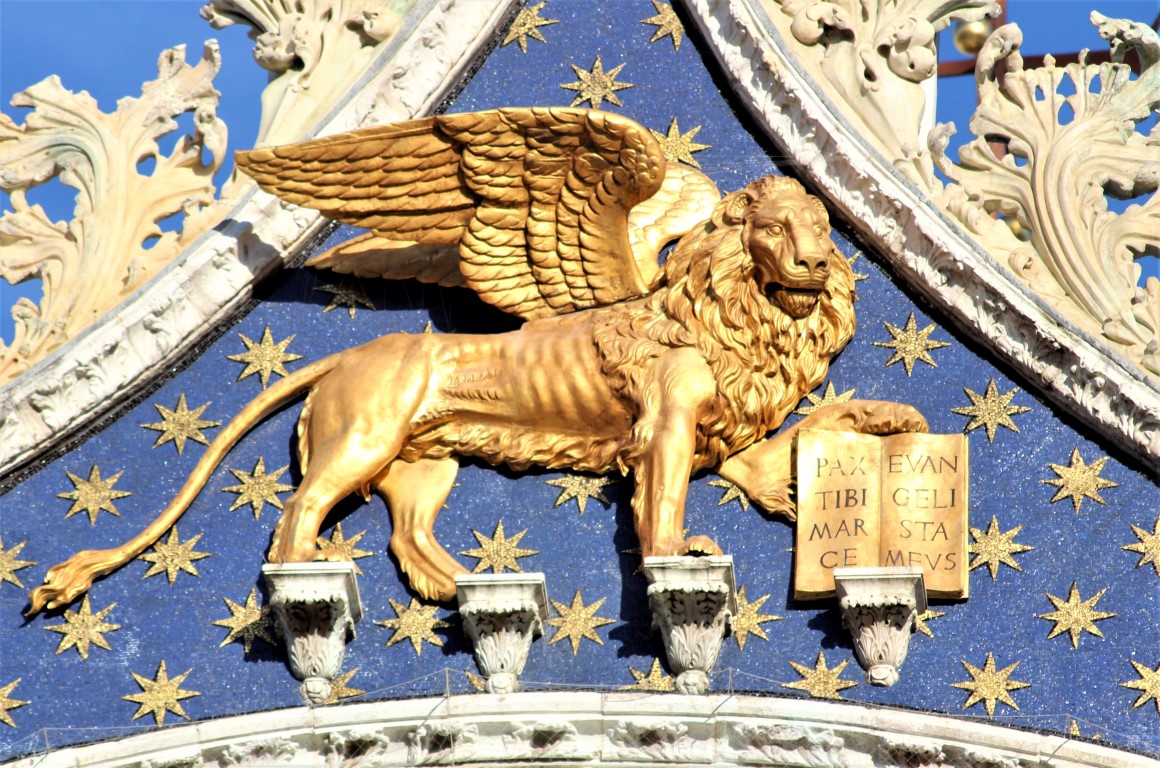 The Winged Lion on the façade of St Mark's Basilica.