A guided tour in Venice: the two columns in St. Mark’s Square

Visiting the heart of the city... Those guests that reach the Square coming from the street called Mercerie, passing right under the Clock Tower, can see at the end of Little St. Mark’s Square two monolithic columns along the quay. The same two columns, with their imposing dimensions, are clearly visible also by those that ride their boats in St. Mark’s Basin. These columns, moreover, are one of the most frequent meeting places for groups of tourists, since it is quite easy to spot them. 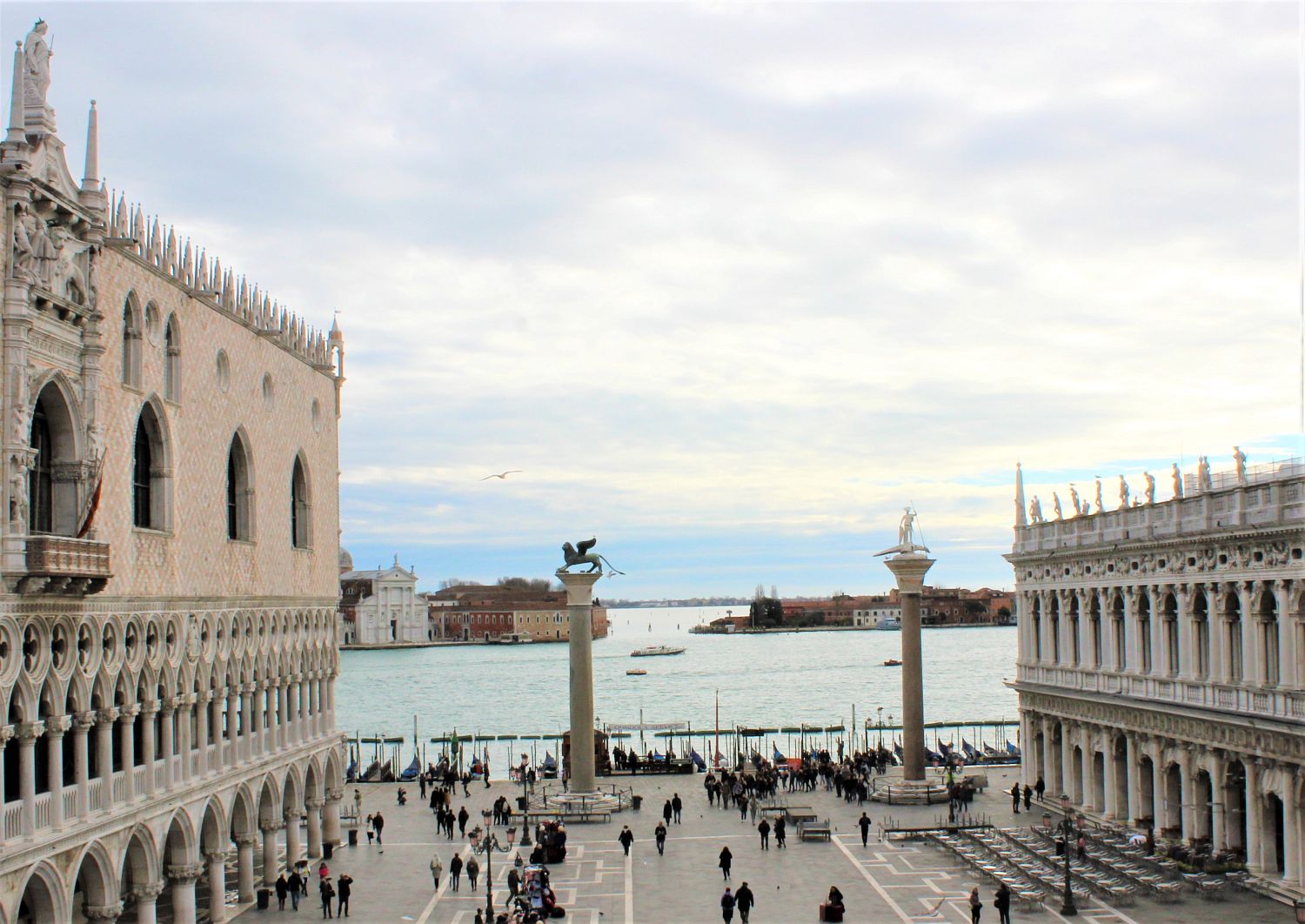 The history
There are not a lot of precise references concerning the history of these columns. Francesco Sansovino in the 15th century wrote that they were brought to Venice from Constantinople around the middle of the 12th century, and that originally there were three of them. Some other historical sources state that it was Doge Domenico Michiel who had them brought to our city in 1125. According to a third version, these columns came from Tire, Lebanon.
What we know for sure is that for a while they were left laying down on the quay, because of their exceptional weight. Only in 1172 could architect Nicolò dei Barattieri come up with a genial ploy that allowed him to erect the two monolithic columns exactly in the place where they still stand today. As a reward, the architect received by the Government of the Venetian Republic the permission to hold in between the columns a stand for gambling.

These columns were considered somehow the official entrance to the Square from the sea: St. Mark’s Basin, in fact, was the place where mercantile ships, coming from all over carrying any kind of goods, would eventually dock.

In this very spot, moreover, important guests of the Venetian Republic would be received by the Doges.

Francesco Bassano, in his painting in the Hall of the Great Council in the Doges’ Palace, represented the Venetian navy ready to leave from St. Mark’s quay to defeat Frederic Barbarossa. We can see Doge Sebastiano Ziani receiving the sword from Pope Alexander III, who thus appointed the Doge as the chief commander of the operation. In this painting, the column with the winged lion dominates the scene, as to stress the incredible maritime power of Venice. 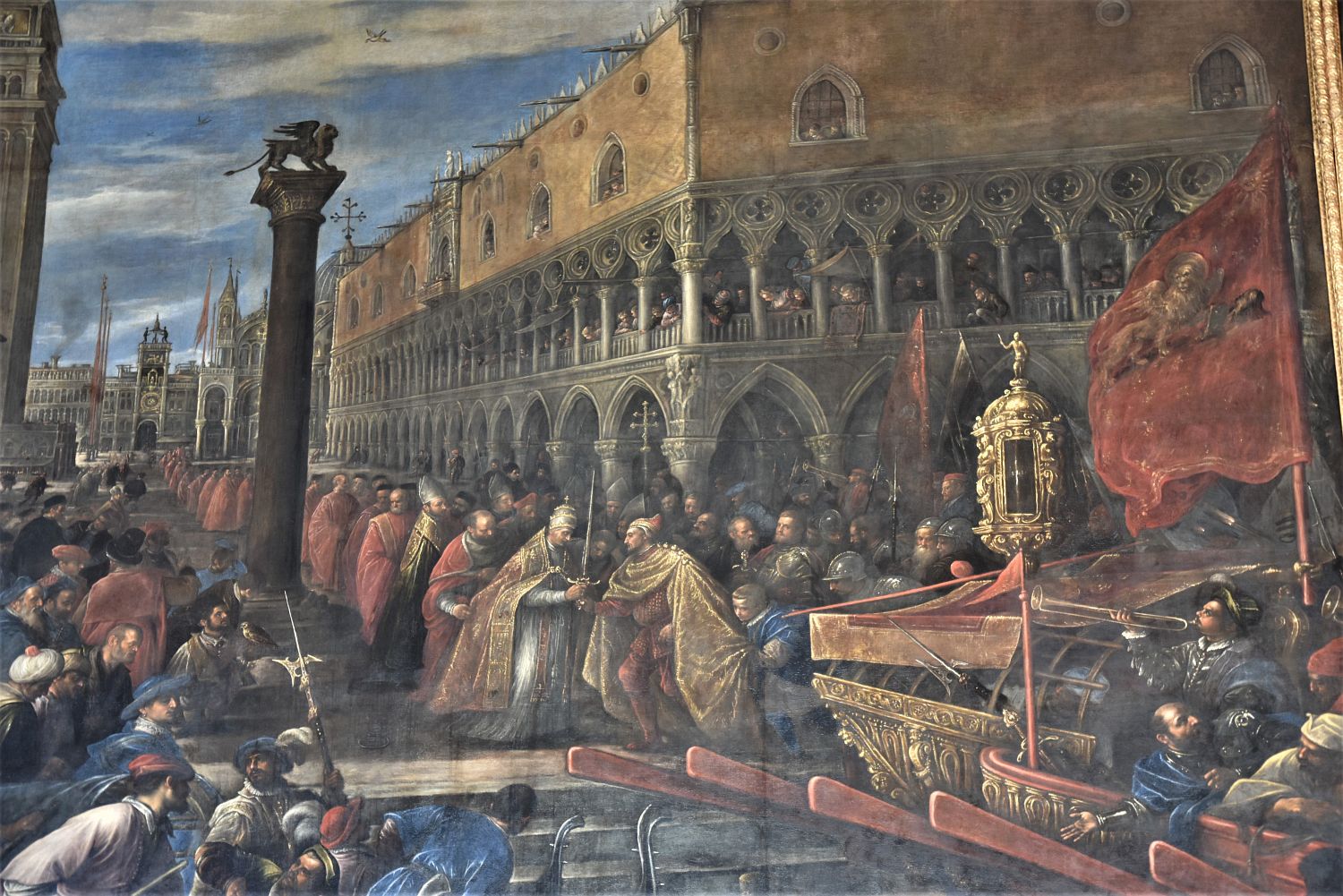 For centuries one could find at the footsteps of the two columns several wooden stands with goods for everyday life. Later on, they became the spot for capital execution.
It is well known that Italians are quite superstitious, and still nowadays some Venetians avoid passing in between the columns on the quay, to avoid misfortune.
The fact that executions would be held exactly in this spot gave rise over the centuries to a couple of original common sayings. One of them is “I will show you, what time it is!” This sounds like a threat: in fact, those that were sentenced to death could see what time it was during their execution, by taking a look at the clock on the Clock Tower in the Square, right in front of them. The other common saying refers to a "person being in between Mark and Theodor", which are the two sculptures on top of the columns. This refers to someone who are facing some serious difficulties in their lives.

St. Mark and St. Theodor
On top of the two columns two relevant sculptures stand: one represents St. Mark’s Winged Lion, and the other St. Theodor. 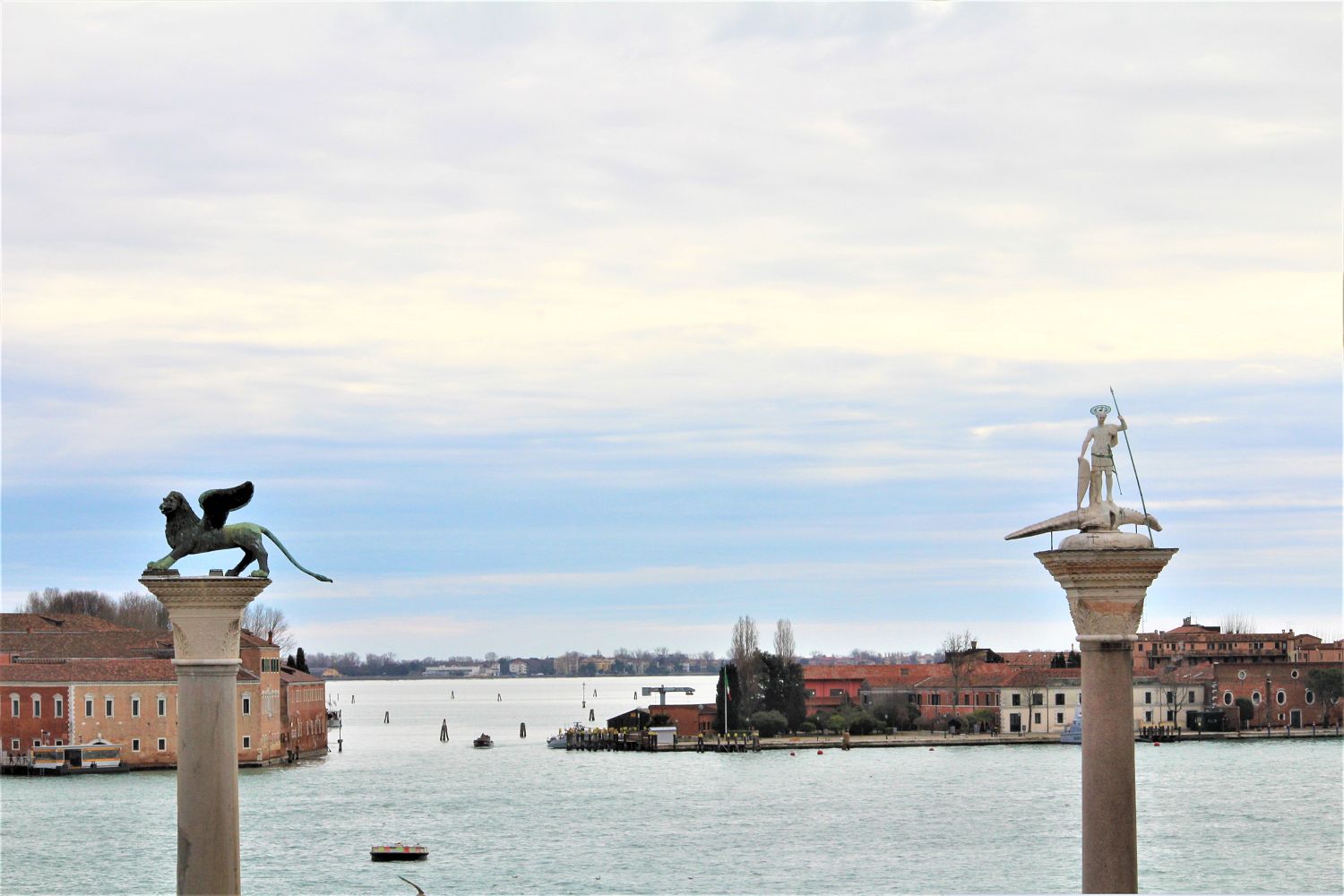 Theodor, a saint of the Byzantine tradition, was the first patron saint of Venice. He is represented holding a spear and a large shield, placed on top of the dragon he has just defeated. This sculpture was carved around 1310 out of marble and limestone, using also some elements of ancient sculptures. 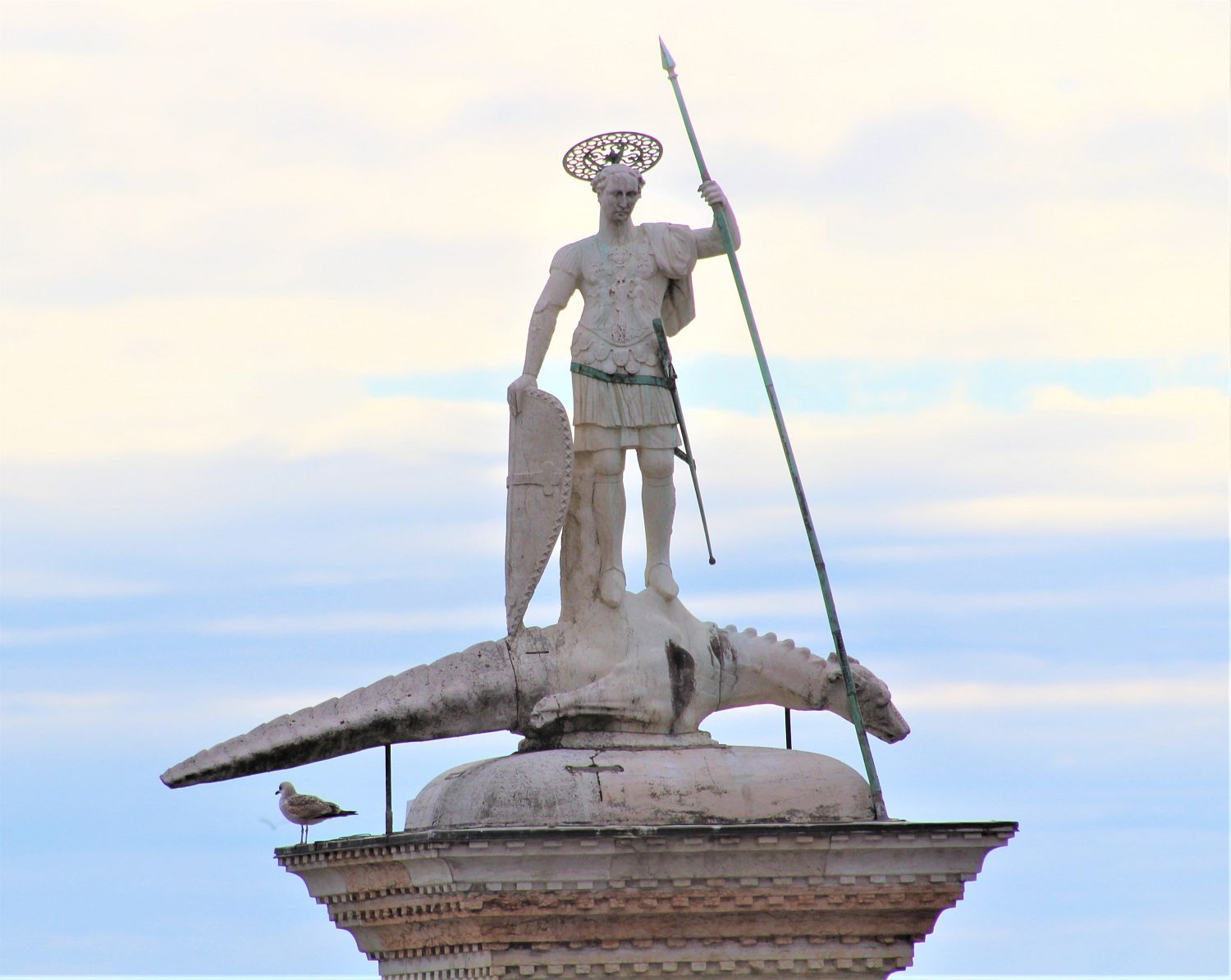 When in 828 St. Mark’s body was taken from Alexandria of Egypt to Venice by two Venetian merchants, Bono from Malamocco and Rustico from Torcello, the city decided to change its patron Saint.
The winged lion is the symbol of the new patron. The sculpture on the second column, however, seems to be a Chinese work of art, or maybe Persian, to which eventually two wings were added. 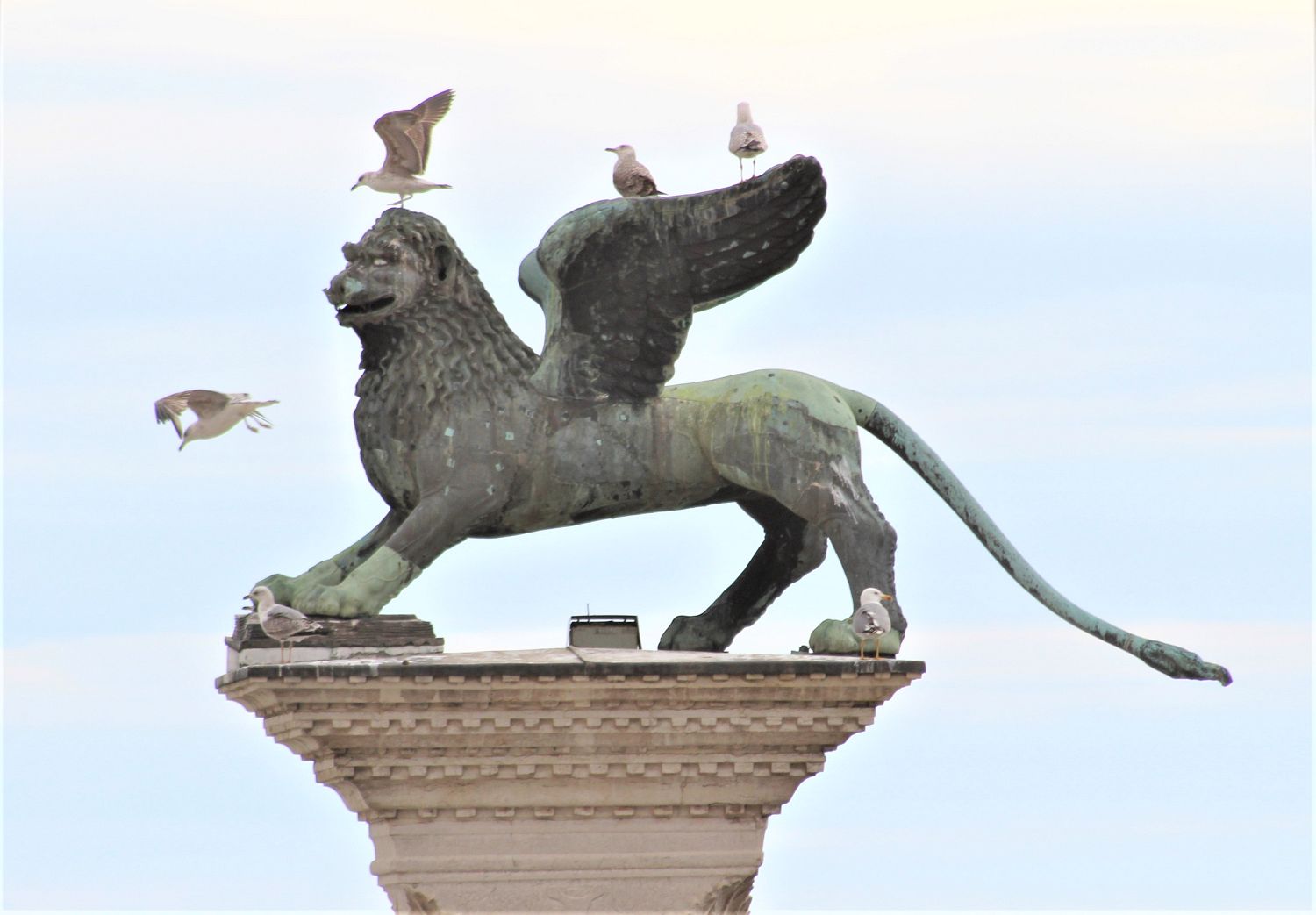 The decision to change their patron saint was also a political move for the Venetians: it was a way to state the independence of the Venetian Republic from the Byzantine empire. The lion then started to appear everywhere: in paintings, in sculptures, on weapons such as shields, spears and helmets, on flags… and nowadays you can find it on the posters advertising the Movie Festival or the Biennale exhibit.

Today the two columns are the perfect frame for St. Mark’s area, and at the same time they appear as the guardians who protect the city, exactly like the guardian statues that can be found at the entrance of Buddhist temples in the Far East: sort of a warning to respect the unique jewel that we are about to visit.