A guided tour at Ca’ Rezzonico Venice: the Nuptial Allegory by Tiepolo

A masterpiece of a major painter of the 1700’s The Museum of 18th century displays a great deal of sculptures, paintings, furniture, frescoes, objects of the Baroque period.
A guided tour at Ca’ Rezzonico in Venice gives us the possibility to admire the last frescoes painted by Giambattista Tiepolo in our city. Among them, the “Nuptial Allegory”well deserves special attention, both for its intrinsic qualities and for its historical relevance. 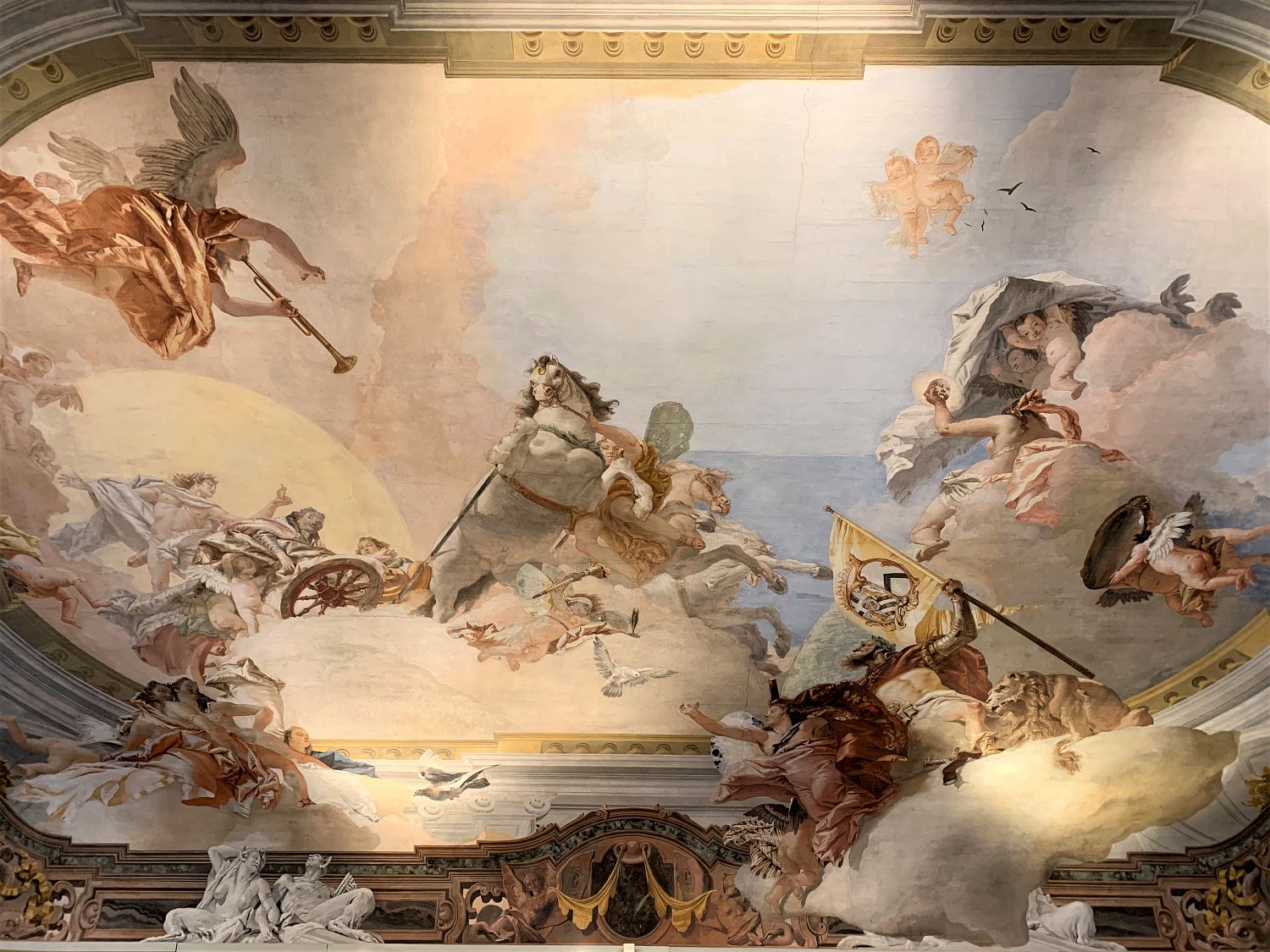 The Rezzonicos
The Rezzonicos were a family of bankers and merchants of fabrics. They moved to Venice from Lake Como at the end of the 1500’s.
Despite their wealth, they would always be considered foreigners, and as such they could not play any role in the political life of the Most Serene Republic.
However, in the 1600’s Venice was engaged in continuous battles against the Turks and the State needed money to finance this endless war.
Some rich families then were allowed to purchase their noble title for great amounts of money, among them the Rezzonicos, who in 1687 could see their name written in the Golden Book, where all the Venetian noble families were listed. 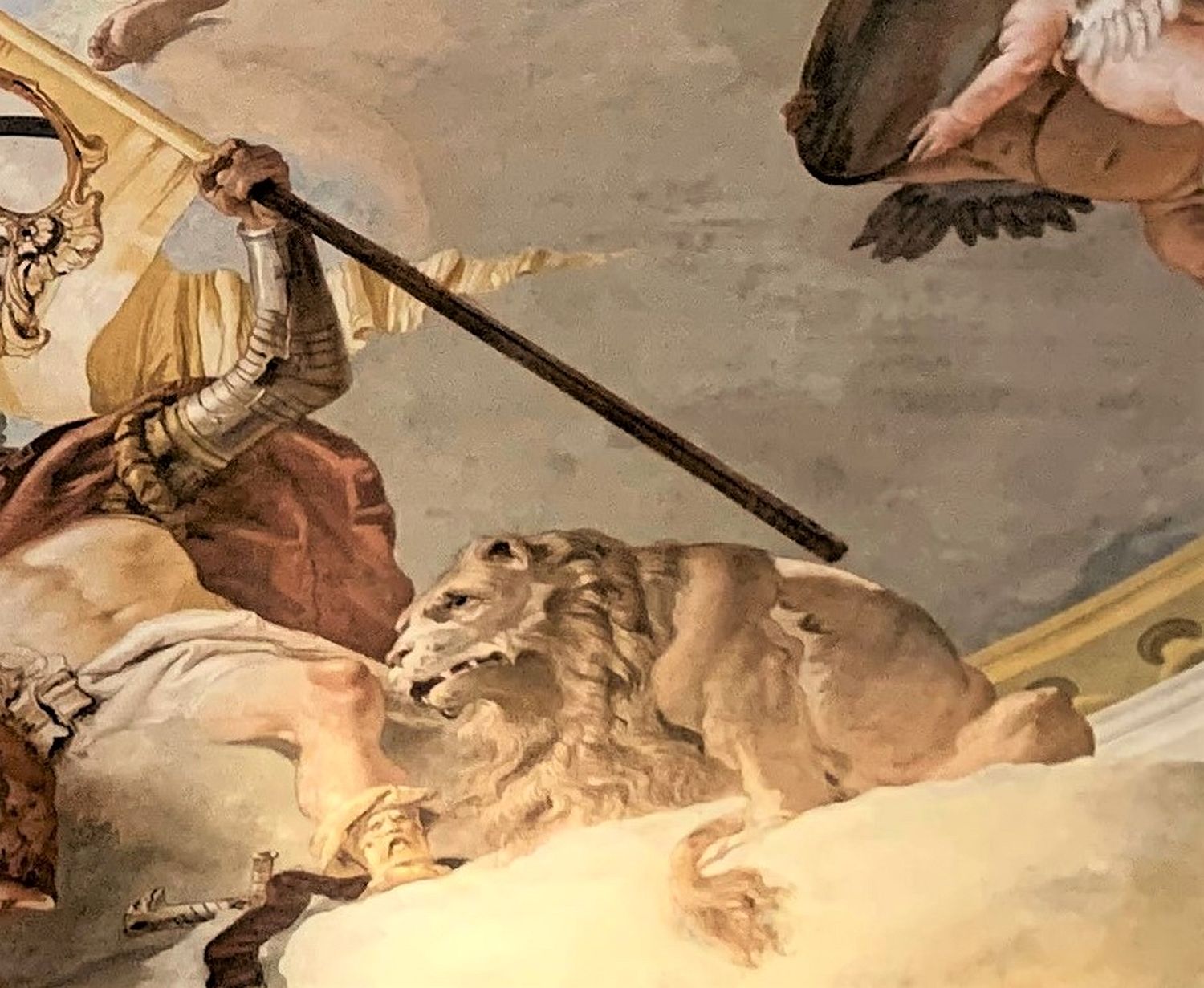 Their fortune would rise from then on: in July, 1758 Carlo Rezzonico became Pope with the name of Clement XIII. In January of the same year the wedding between Ludovico Rezzonico and Faustina Savorgnan was held. Faustina belonged to one of the real noble families in Venice.
The Rezzonicos decided to celebrate this event by commissioning a marvelous fresco to Giambattista Tiepolo. 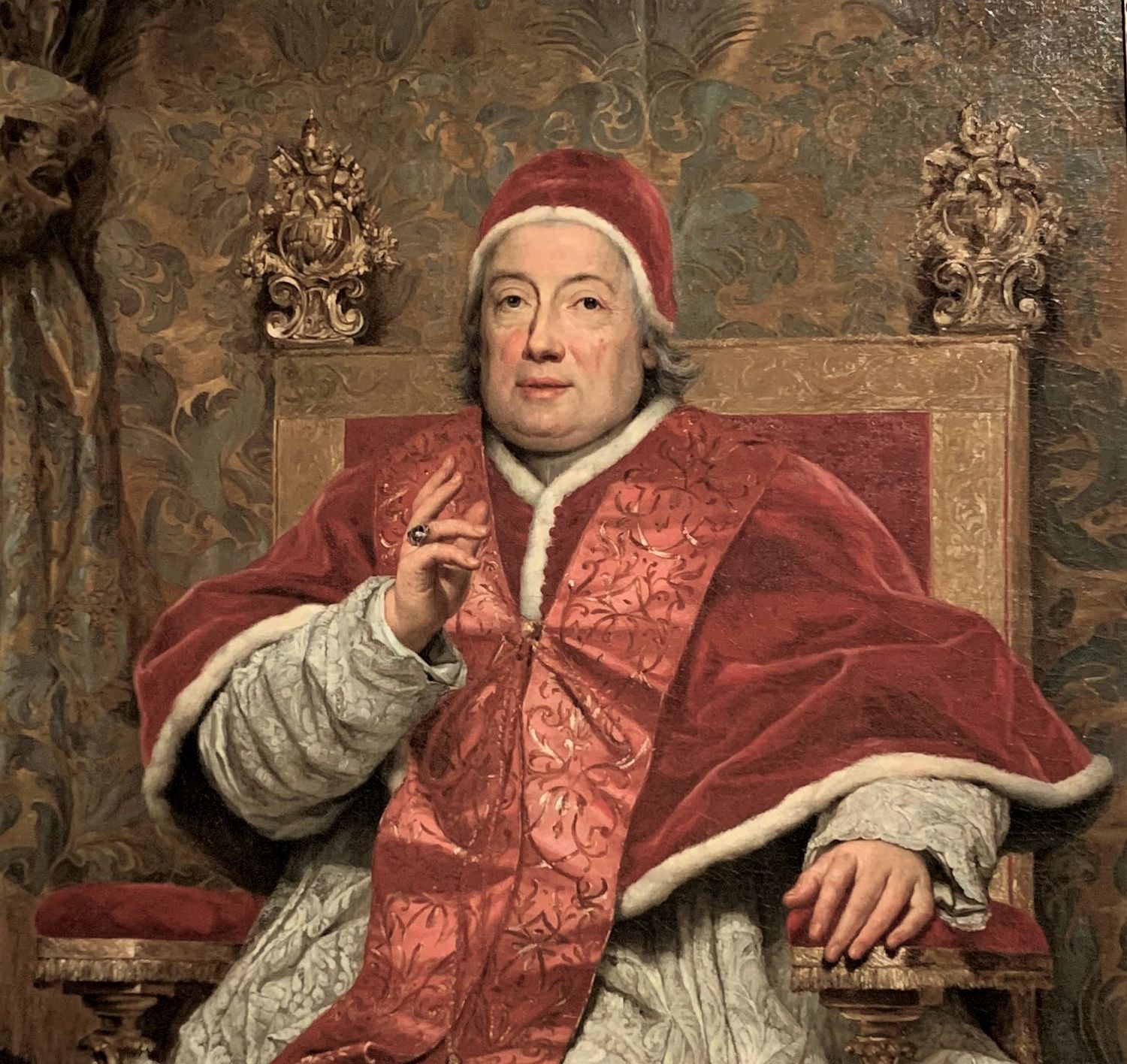 The Nuptial Allegory
In the center of the fresco four magnificent white horses pull Apollo’s chariot, on board of which we can find the newly married couple. Blindfolded Cupid precedes the chariot, while the god of the sun is represented behind the couple. 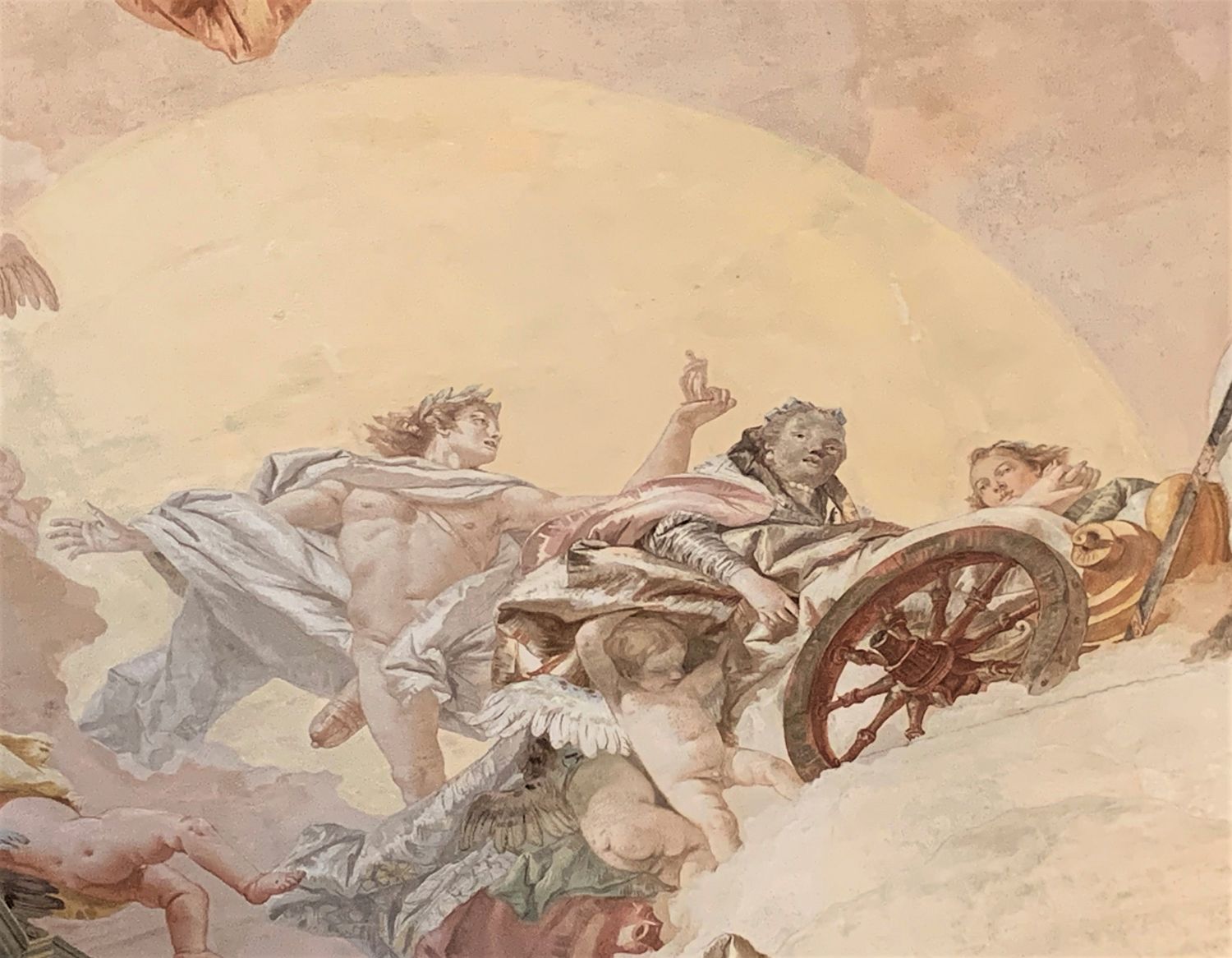 Fame, with its trumpet, spreads throughout the world the news of the wedding. Under the chariot we can admire the Three Graces. Quite an impressive figure, Merit, an old man wearing a laurel crown, holds the banner with the coats of arms of the two families. 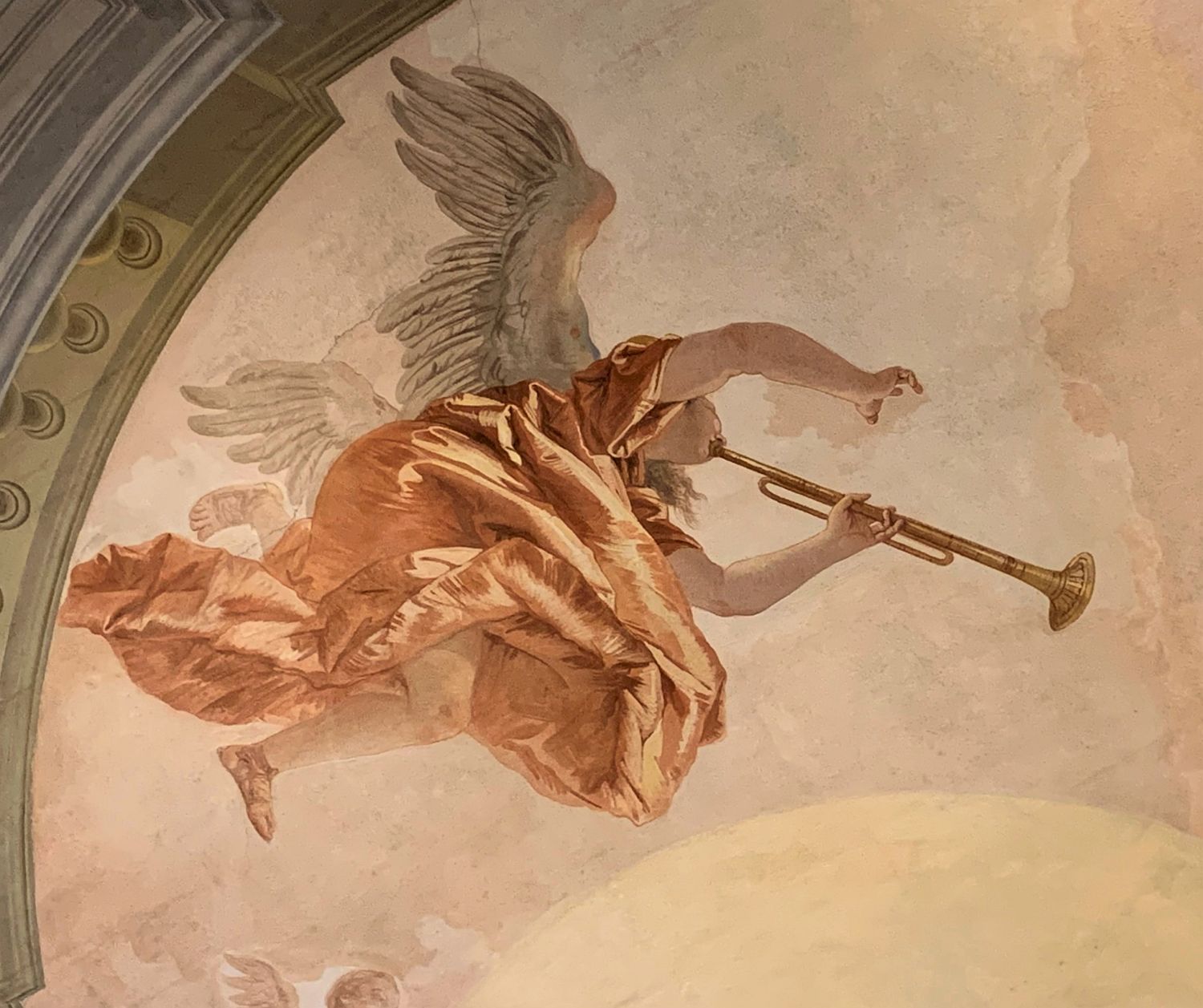 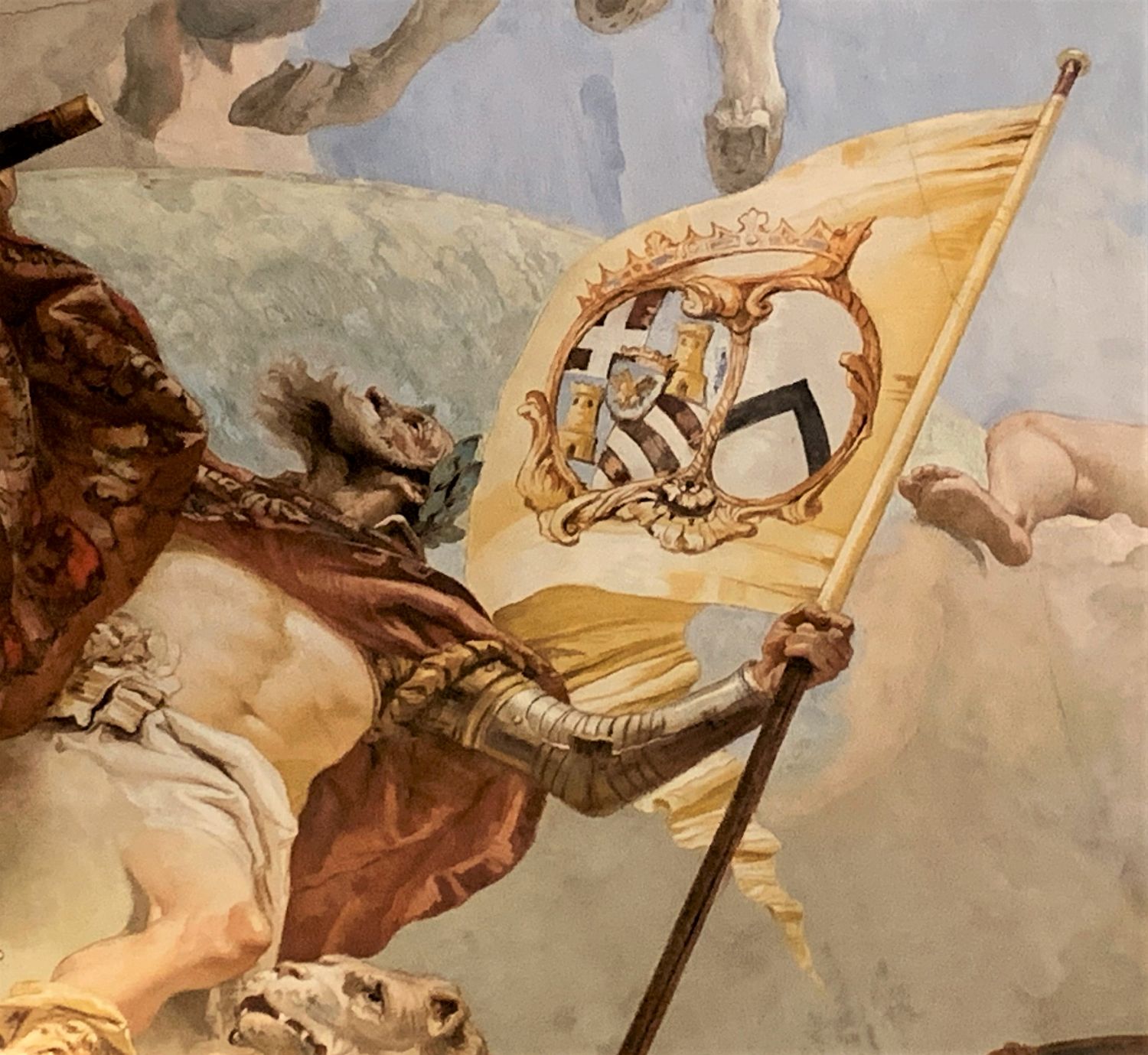 All around, on both sides of the banister painted in trompe l’oeil, we can see putti in playful moods, clouds, satires… all this creates an upward thrust that seems to expand the space, way beyond the frescoed ceiling.

Here the typical features of Tiepolo’s art are all present: the folds of the clothes blowing in the wind, the luminous pastel colors, with their wide range of shades… you feel as if you were in the open air, not inside a room.
The golden sunlight on the left is perfectly balanced with the pale blue sky on the right, creating a special radiating effect, which we will see at its peak in the frescoes painted by Tiepolo in Villa Pisani at Strà. 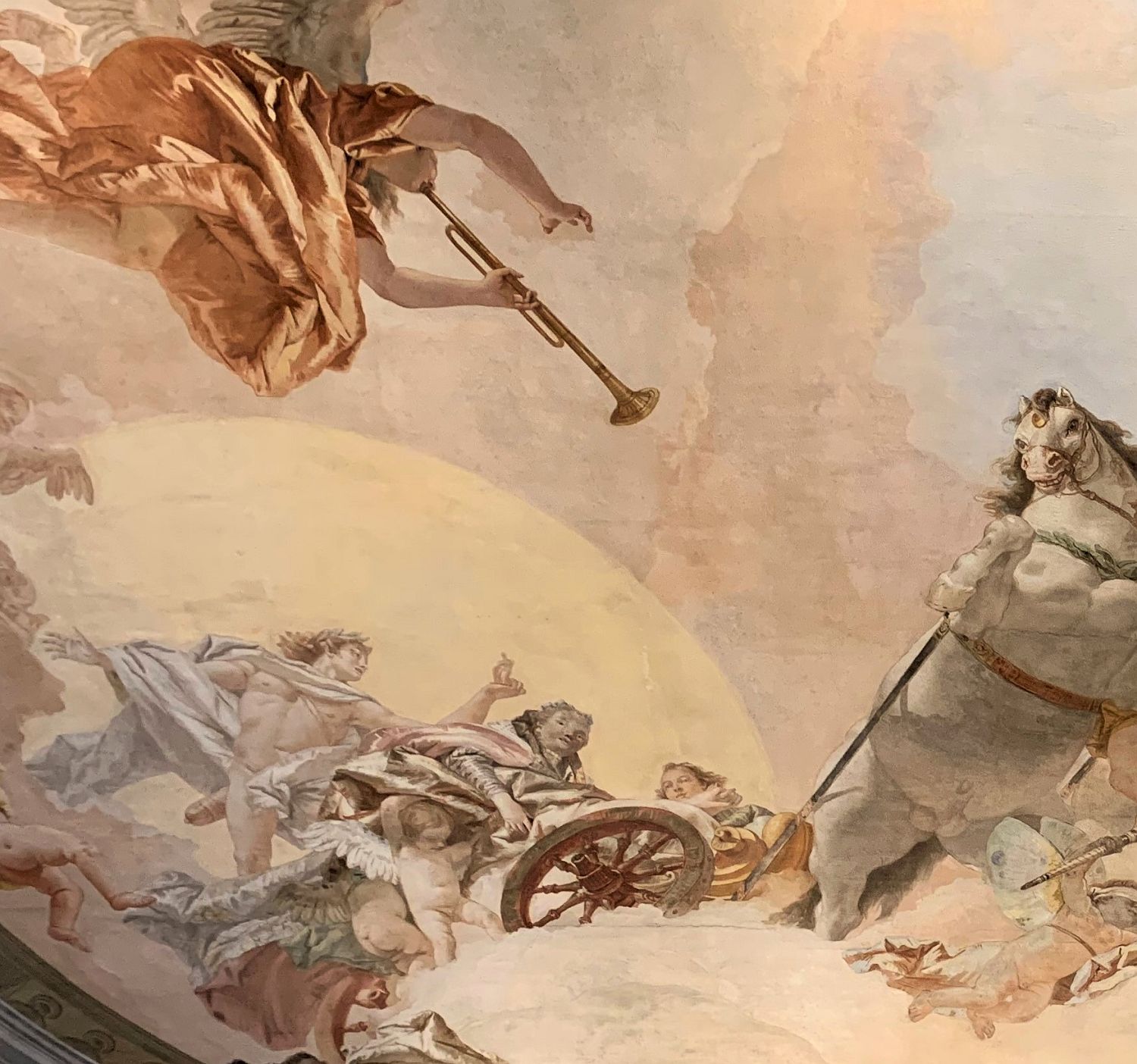 Gold and pale blue: these are the colors that seem to announce the future fortune of the new couple.

We are waiting for you, to take you on a private guided tour of Ca’ Rezzonico: we will be delighted to show you the masterpieces of this fabulous palazzo on the bank of the Grand Canal.