A customized kids tour in Venice: a Prince, a Princess and a Pope: Saint Ursula’s story at the Accademia Galleries in Venice

Are you ready for a story painted in 9 canvases? Hi kids! Here I am again, my name is Vittore Carpaccio! Do you remember me?

Today Lady Marialaura, Lady Monica and Lady Cinzia have asked me to tell you another story, one of those that I have illustrated with my sublime masterpieces. As you know, dust and humidity are terrible enemies of paintings and works of art in general. But skilful restores have just cleaned and restored some of my wonderful canvases, and they have definitely done a great job! (Link Carpaccio's canvases on St. Ursula's story are now visible again ).

Once upon a long long time ago, in a nice city in Britain, there lived a beautiful princess, Ursula.
She was quite tall and slim, she had long golden hair, her face was delicate, like the face of an angel… Everybody loved her thanks to her infinite kindness. 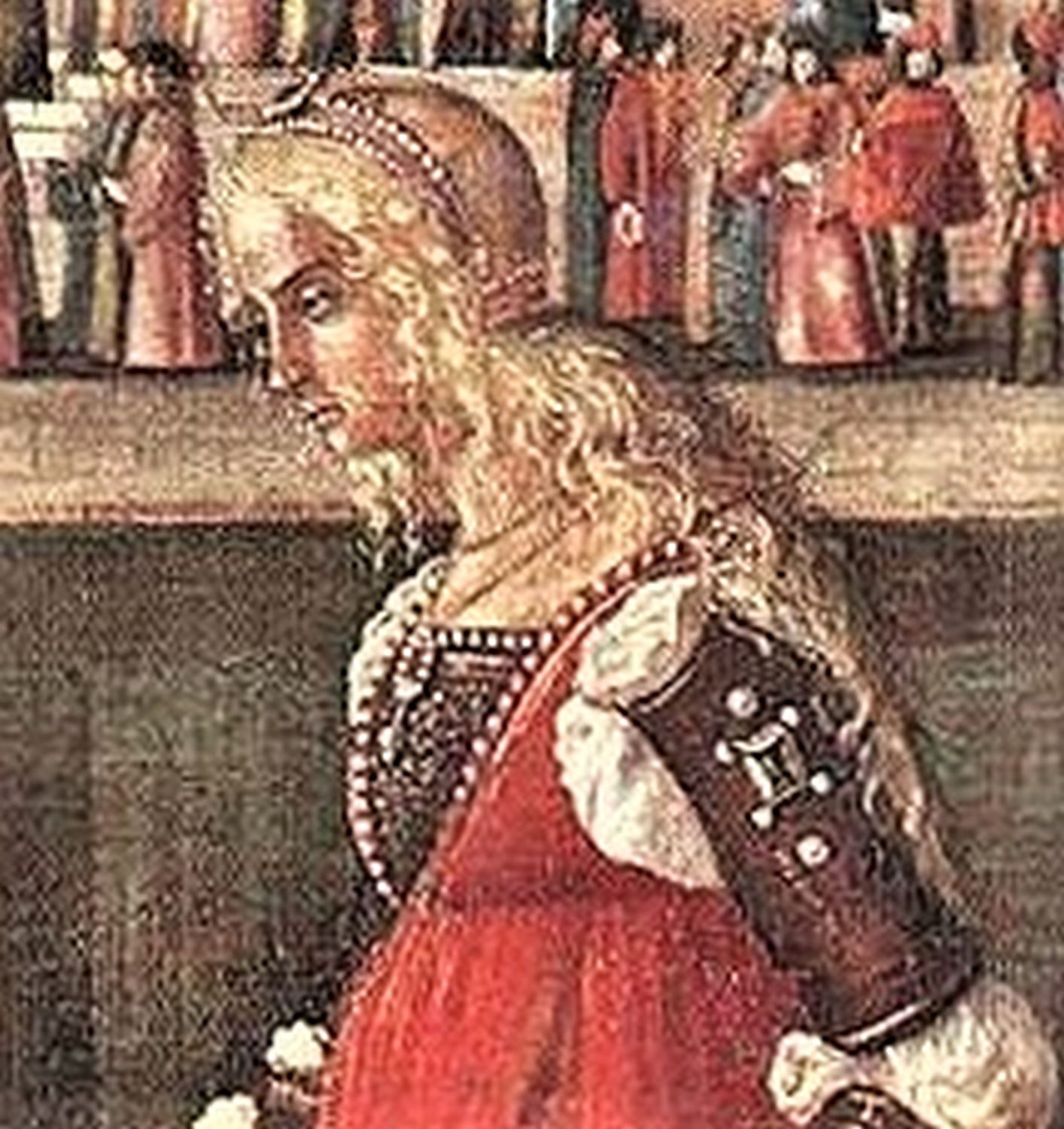 As you can imagine, such a great young lady was soon asked to become the wife of a handsome prince (a really cool prince, as you guys say), whose name was Ereus (also known as Conan… and do not ask me why he had two different names). This young gentleman had long waved hair: he definitely used a curling iron every morning to get that result (I have no idea what a curling iron is, this is what I was told by my three ladies). Anyway, he was not only handsome, but also very kind. He sent his ambassadors to Ursula’s father, to ask for permission to marry Ursula. 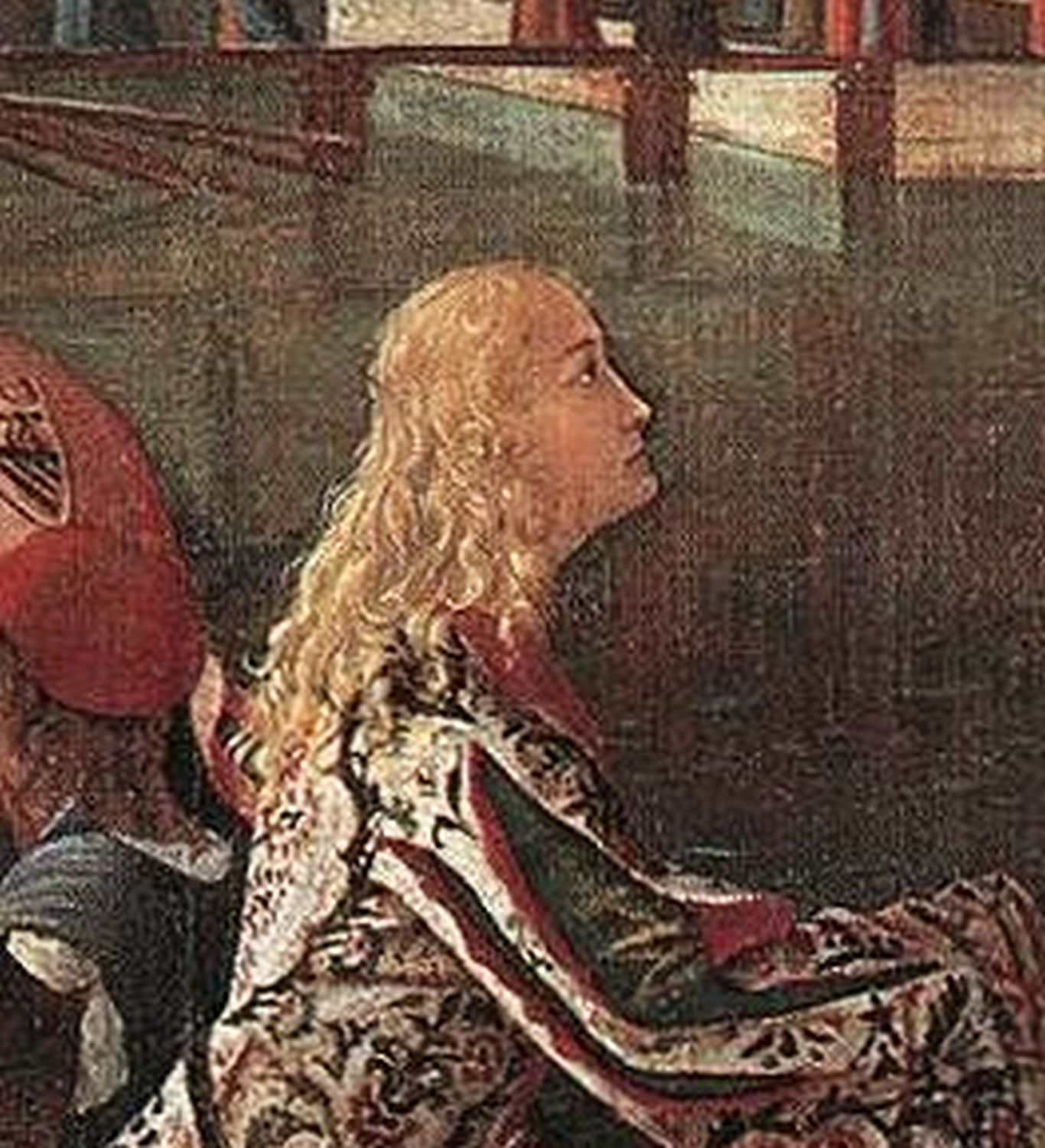 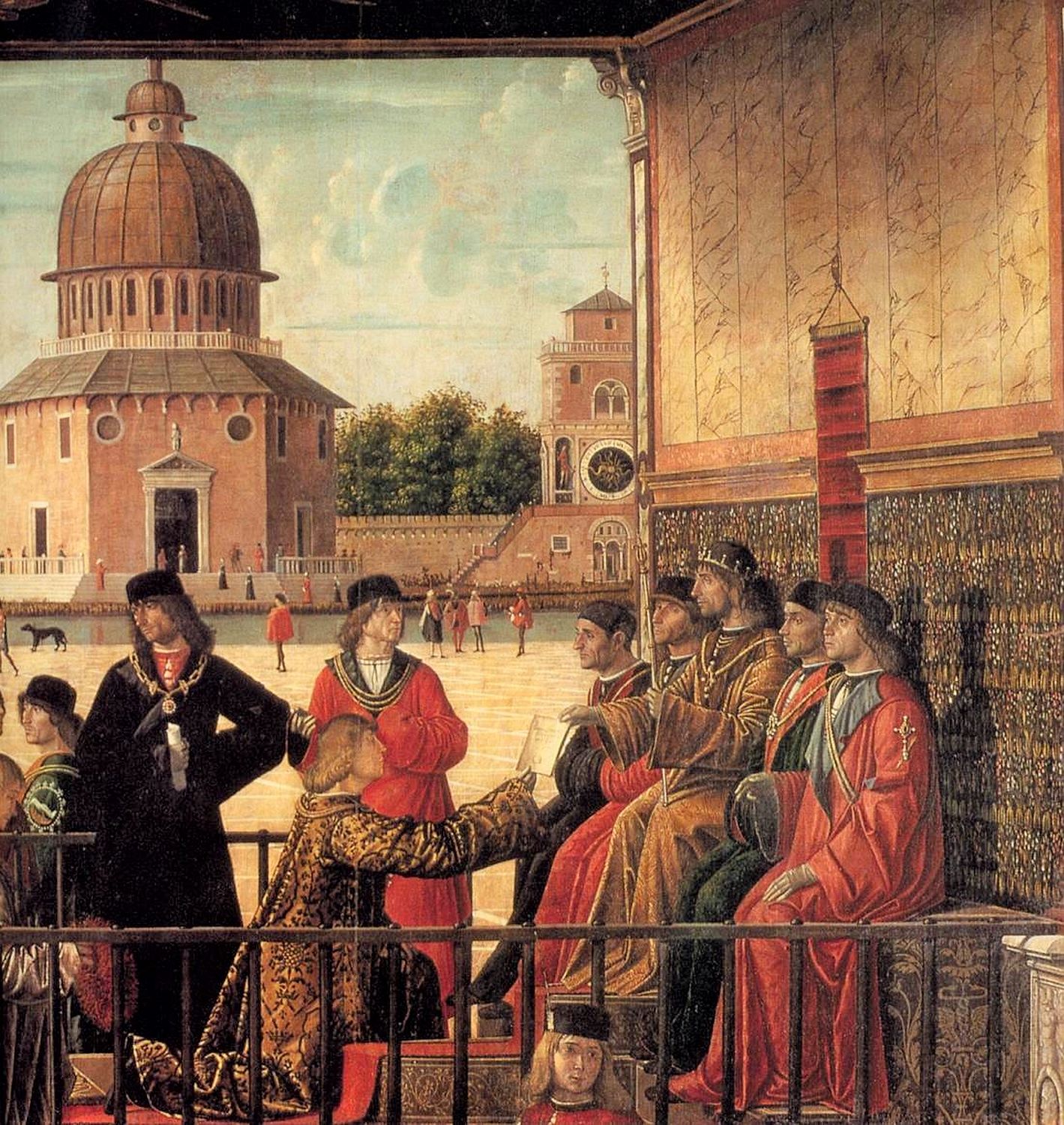 The arrival of the Ambassadors

Now, a kind and beautiful princess and a kind and handsome prince in normal stories get immediately married, right? No way, kids, this is not the case.
Why are these saints so strange? The problem was that the prince was not a christian. Ursula, who, in my modest opinion, probably liked the young prince, decided that she would marry him, but at her own conditions: the prince would have to become a christian, to wait for three years before their wedding could take place (definitely only a saint would have accepted!) and to leave on a pilgrimage to Rome with eleven thousand virgins (no more and no less!), where Pope Cyriacus himself would celebrate their wedding. Cyriacus… never heard of any such pope… 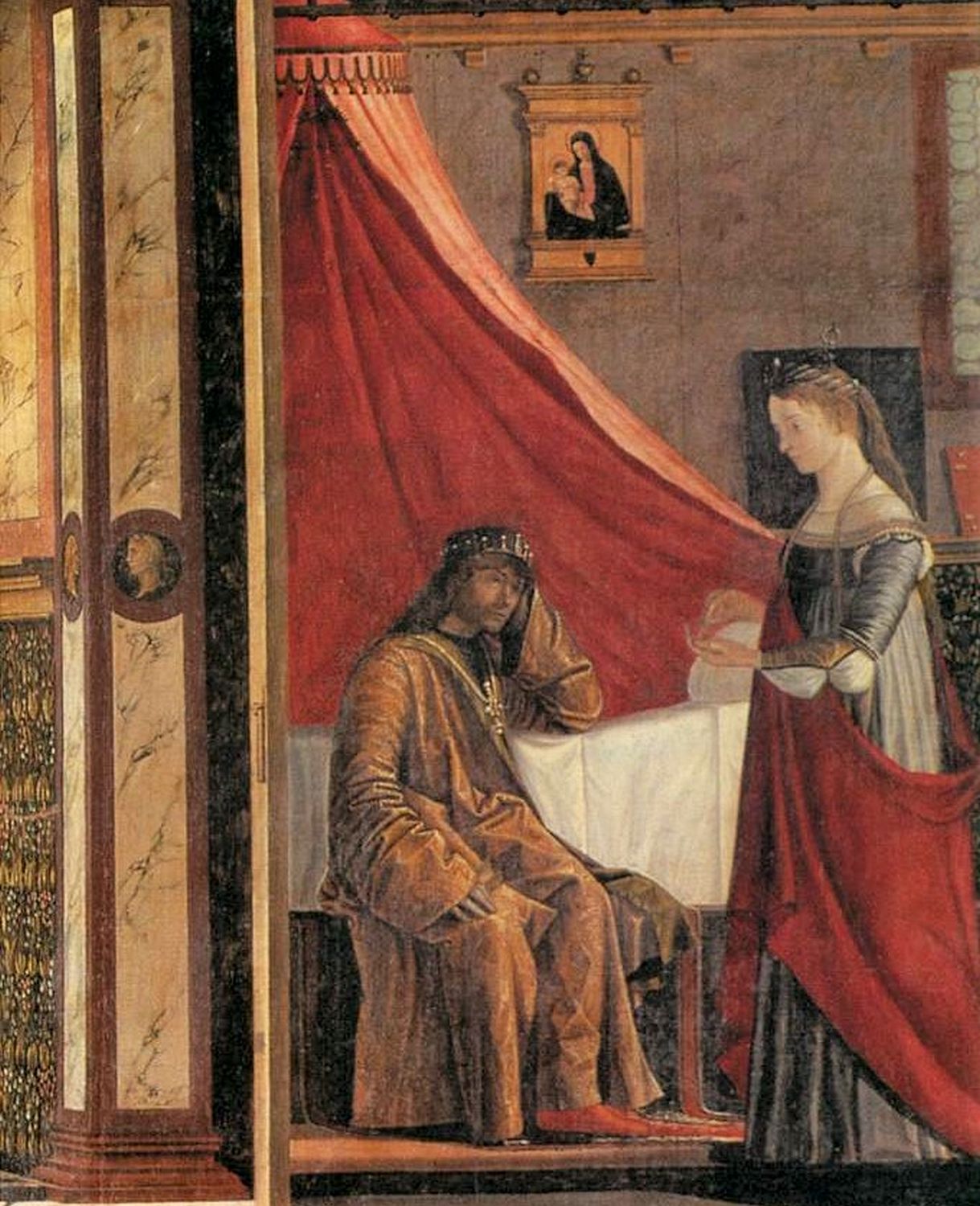 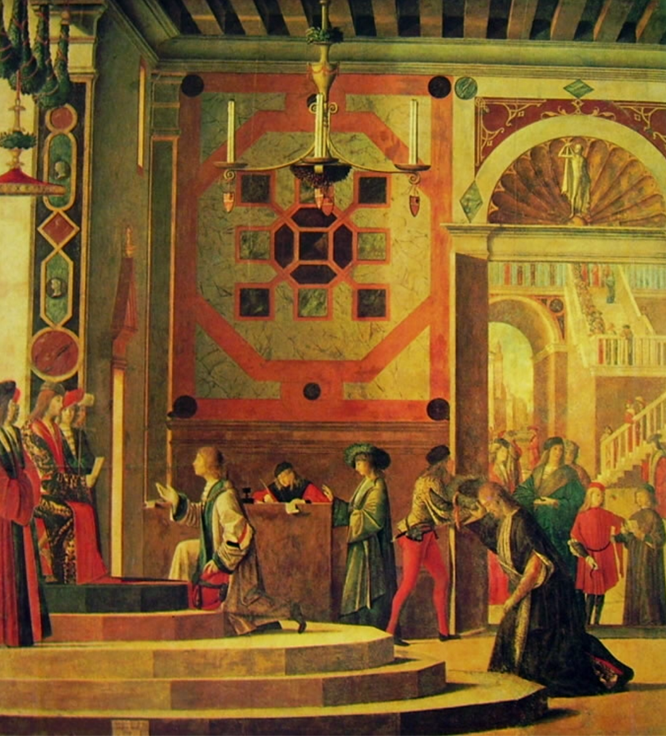 The departure of the ambassadors

As soon as they received the letter with Ursula’s conditions, Ereus’s ambassadors departed. 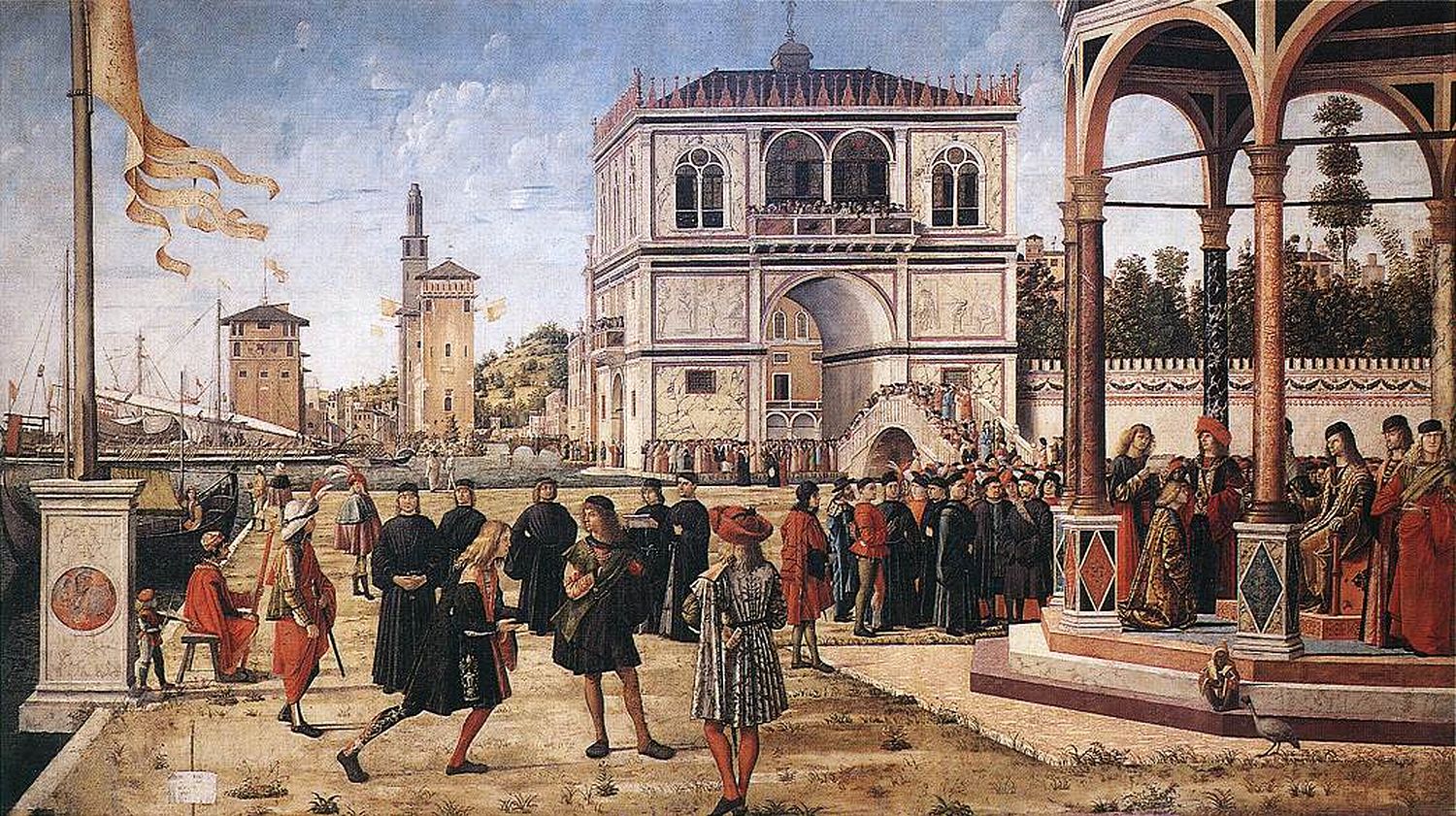 The ambassadors return back home

Wait a minute… have you noticed these youths wearing such original colourful stockings? They seem to be absolutely everywhere! What are they doing in my paintings? I am a real genius, what can I say…
The Princess an the Prince meet… and it is love at first sight!
Ereus accepted Ursula’s demands, and shortly afterwards he left on his ship to finally meet the princess. 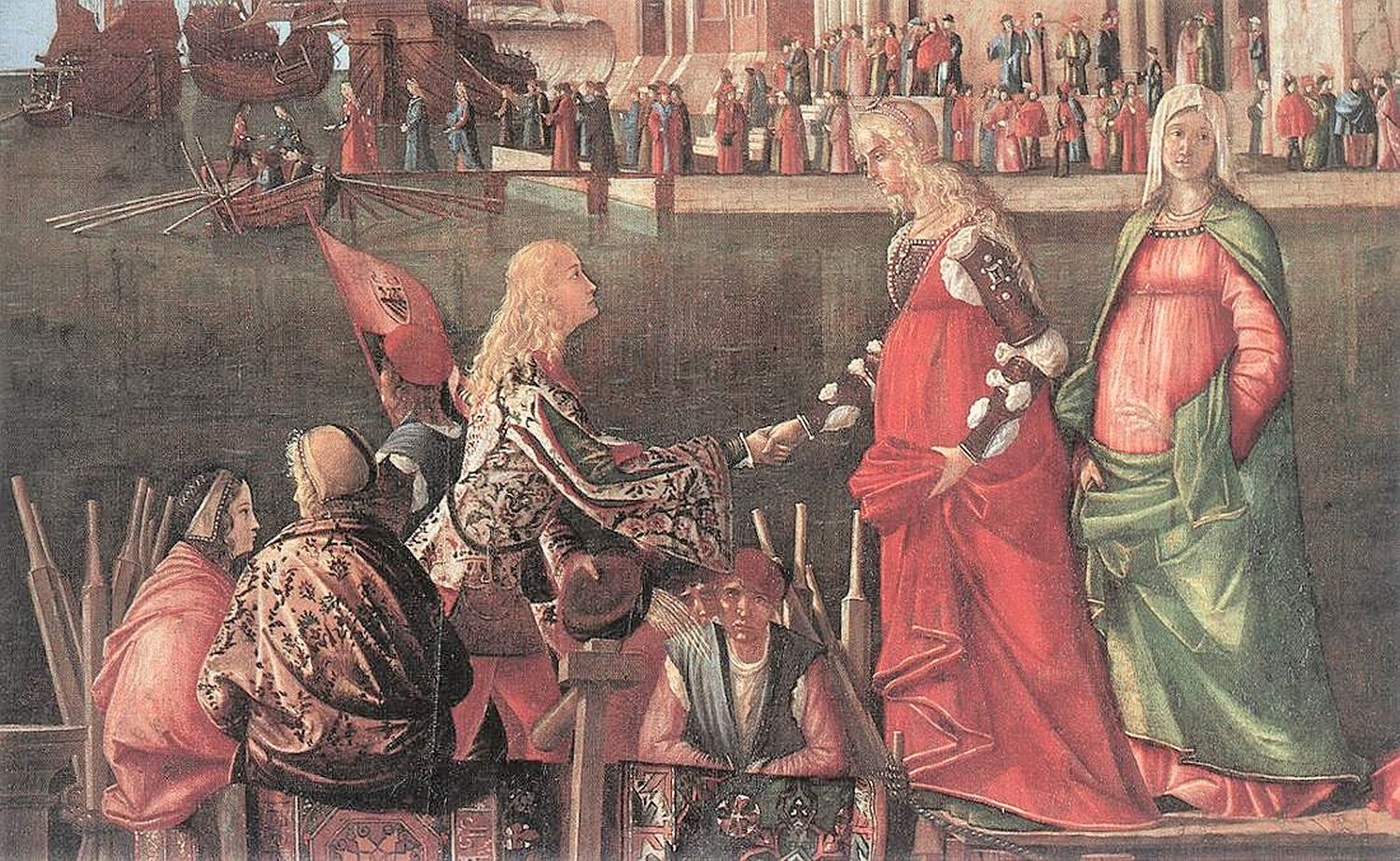 Hey, guys! This painting is simply phenomenal! Take a look at the two cities at the sides, Ereus’s on the left and Ursula’s on the right. How many differences do you notice?
Pay attention to objects, buildings, styles, landscapes… can you see the flagpole in the middle? What do you think: why did I paint it right there?
How many scenes did I represent in this painting?
As a matter of fact, the meeting of the two youths is not the only one… of course, the reproduction you see in the picture above is quite small, so it might be hard for you to tell, but when you come to Venice and visit the Accademia Galleries to admire this great masterpiece of mine, you will see how complex it is. And if you ask the three ladies, Marialaura, Cinzia and Monica, to take you there, they will be more than happy to unveil for you all the little secrets that this work of art contains.

The procession with Ursula, Ereus and the 11,000 virgins eventually left (how long did it take to embark them all? Months?).
During the journey, however, Ursula dreamt of an angel that handed her a palm leaf… what can this mean? I am pretty sure it is bad omen… 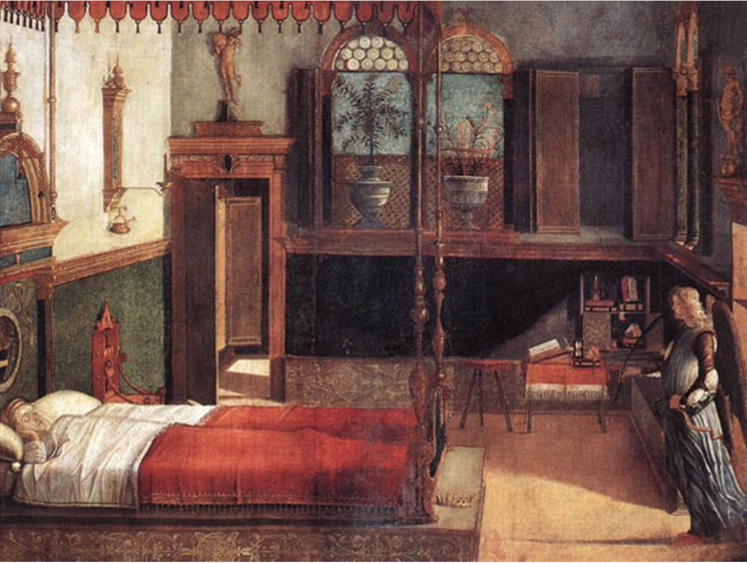 Anyhow, they finally reached Rome and met this unknown Pope Cyriacus.
That building in the background reminds me of something… Today it might be quite different from the one I represented. The three ladies maybe can show you a more recent image of it… Hey! The virgins are still coming off the ship! What a patience! 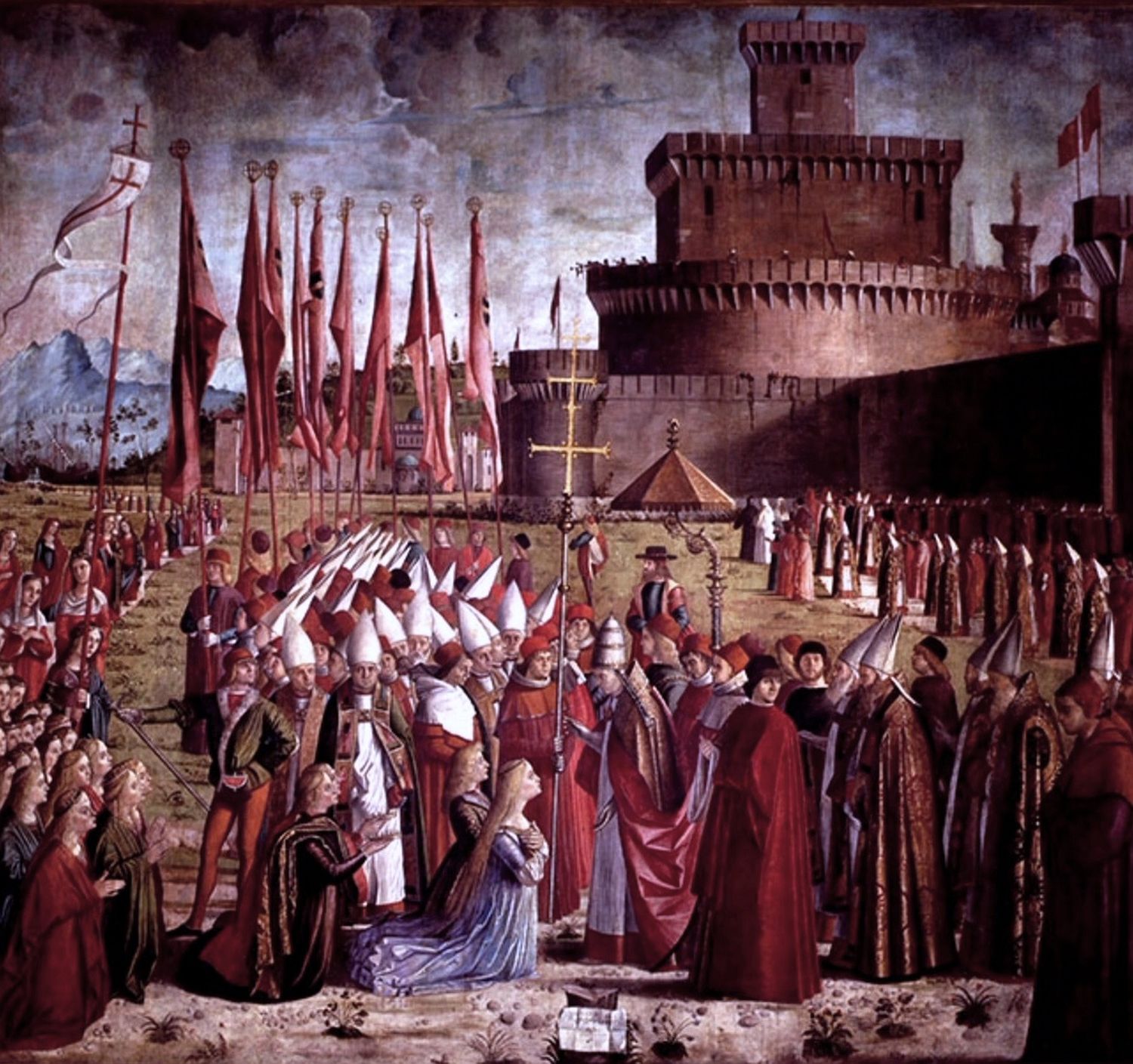 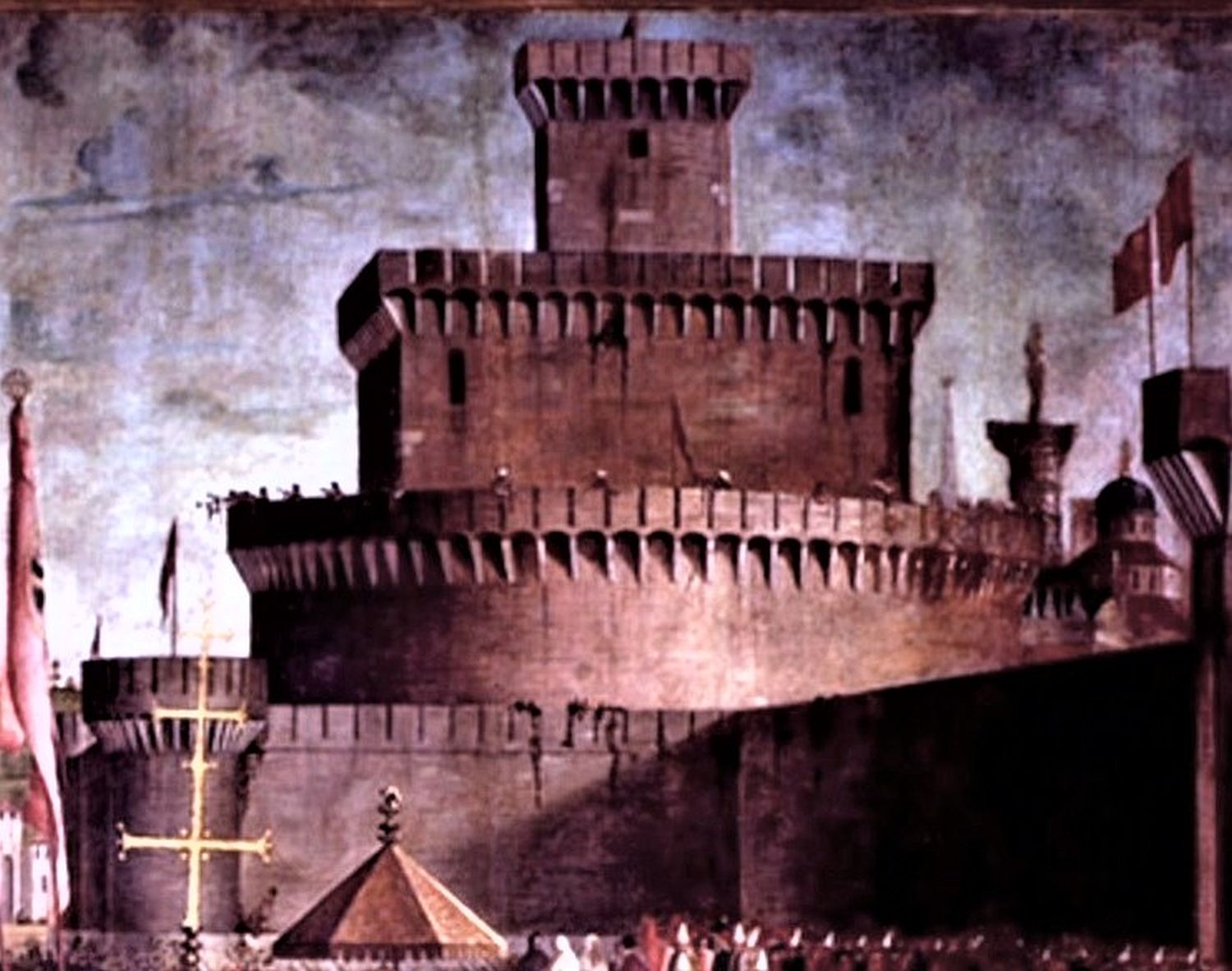 Castel Sant’Angelo in Rome (detail of the painting) 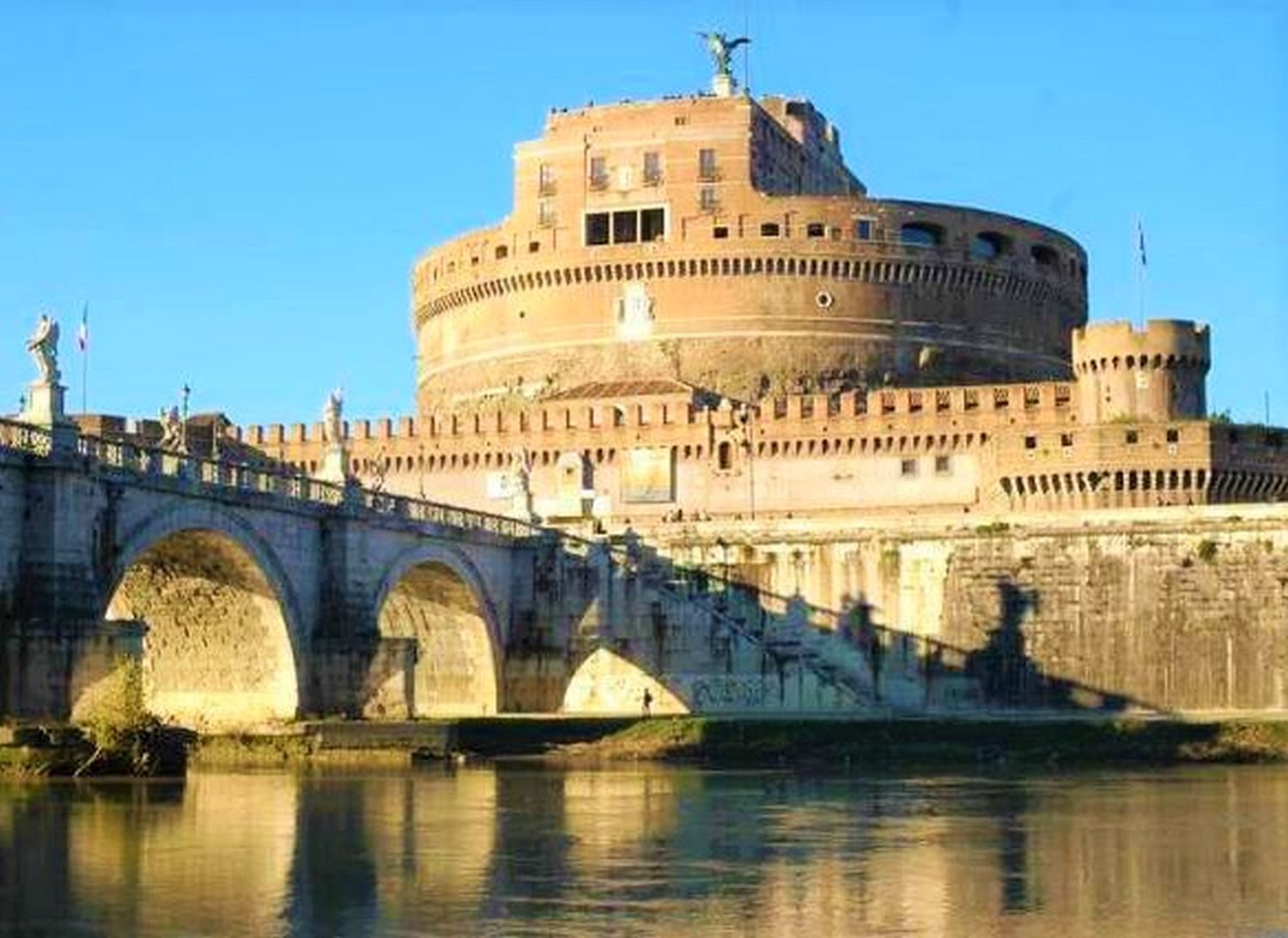 On their way back home, the pilgrims stopped in Cologne, which, by chance, was being devastated by the Huns… obviously, Ursula, Ereus, Cyriacus and these poor 11,000 virgins were killed by the cruel barbarians. 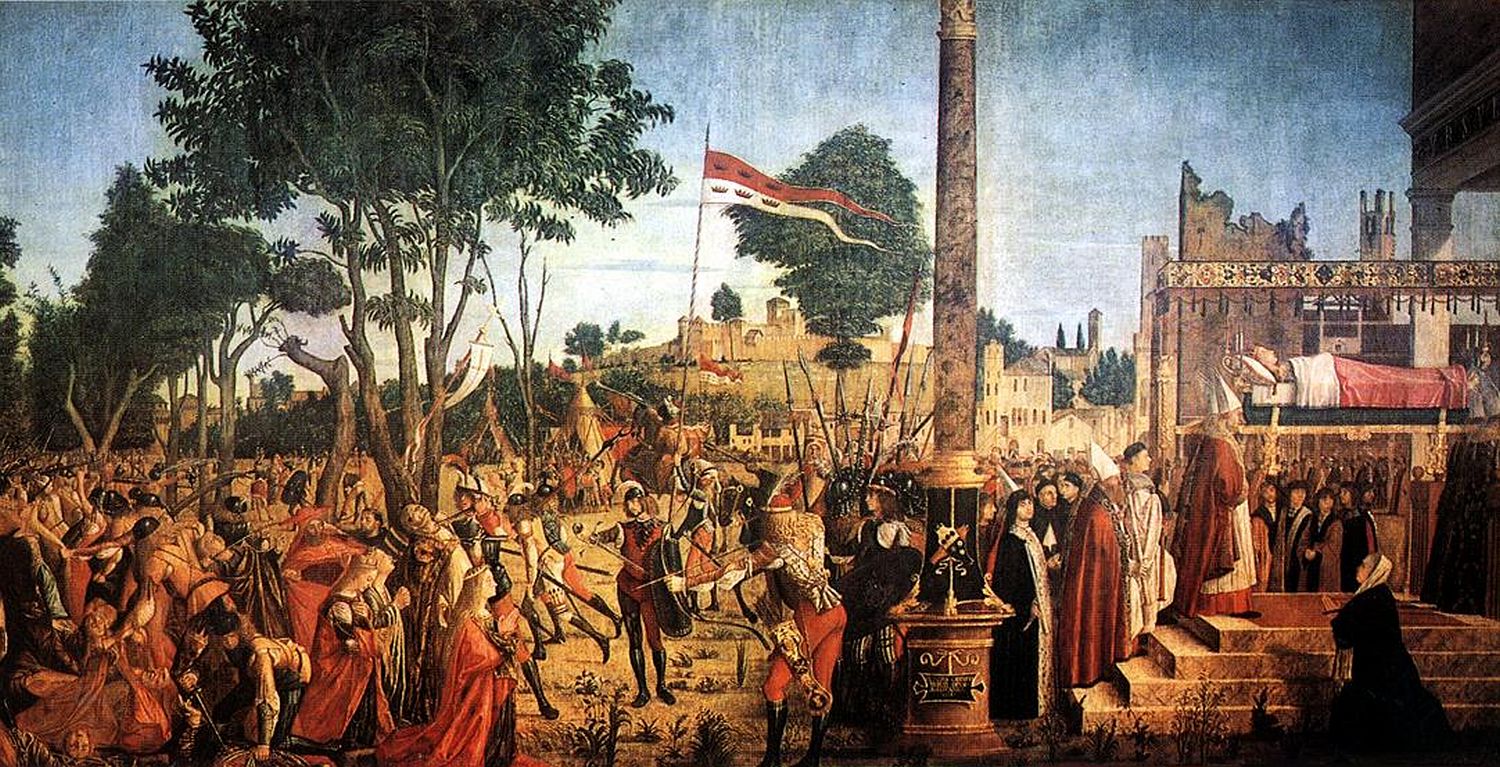 Take a look at the Huns. They are quite weird… There are different kinds of them: white, black, wearing turbans, colorful stockings (again!). Try to find the most original! And have you noticed their flags? White and red, with three golden crowns. Try to insert into your hellish devices the description of these flags and see what results you get. What are you asking? Which hellish devices? Oh my, those rectangular things that seem to be glued onto your hand, those that sometimes make a disturbing noise with a disturbing vibration…
Admire the elegance with which the soldier on the foreground is about to hit poor Ursula with his sword. I have to admit that the position looks quite unnatural. But the effect is fascinating, isn’t it?
As you can imagine, right after her martyrdom Ursula was proclaimed a Saint. 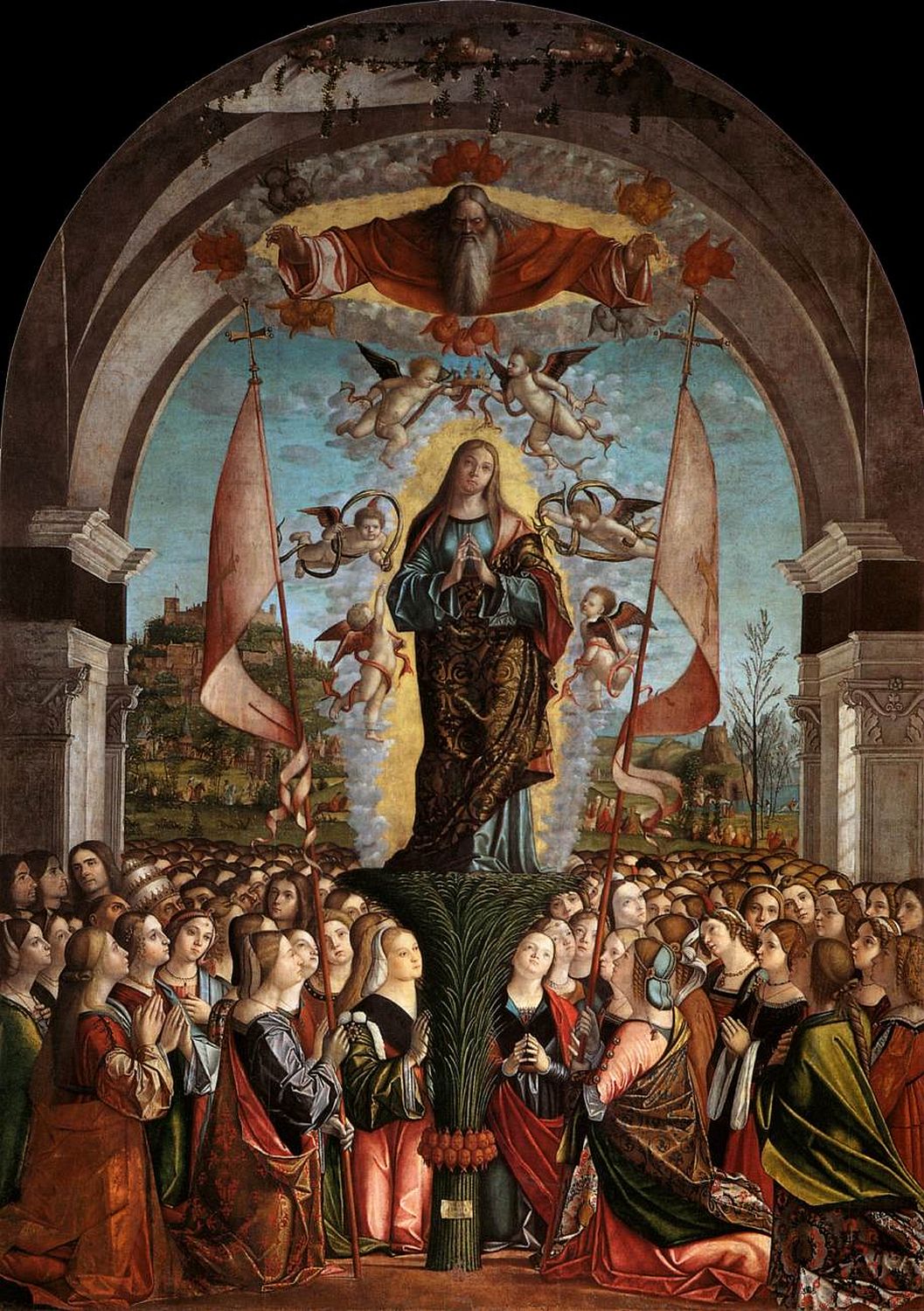 The Glory of St. Ursula

Young readers, I invite you to come and see these major masterpieces with Lady Marialaura, Lady Monica and Lady Cinzia: they will tell you the story more accurately, they will show you all the details of the paintings: colors, style, figures… and they will definitely unveil all the mysteries that such works of art hide.
If you wish, they can also organise for you a treasure hunt, so that you can learn a lot and at the same time have fun!

You know what? I am hungry now… I think this is because of my last name, Carpaccio… I am going to hunt for some delicious appetisers, the renowned Venetian cicchetti, and I might take your parents with me, while you are busy at the museum. See you soon! And do not miss to read my story about Saint George and the Dragon! (Link: Venice and its legends: Saints, Dragons and Pricesses).